. I really don’t want to get into a Special Edition debate right now.

yes you do! And a few others. Thank you, it makes my heart happy.

Thank you. This is what I keep trying to say and have failed to say it so well.

I just allow myself to be entertained and enlightened.

I tried to. I really did. I was SO SO SO looking forward to the prequels. I waited “my whole life” (not really) for them, it seemed. I was like a kid in the candy store when I went to see them.

And then the big day came, and I watched with bated breath.

Jar Jar, bad script, bad acting, etc…kind of made it hard to love the film. I enjoyed aspects of it, but walked away annoyed.

There is a seemingly something along the lines of the “law of returns” for each.

In the original Trilogy: the whole thing is watchable, start to finish (though did get a little wonky toward the end with RotJ)

The Prequels: Each of the movies has a solid 35-40 minutes of great movie. The rest is trash.

I guess I’m super glad to come into this so late in life, and without need for waiting and worrying and building it all up in my mind.

It’s like what happened with this great book everyone was reading a couple of years back. All I kept hearing was how great it was and I had to read it and oh my gosh it was so good! And when I read it I was like - yeah, good story, but nowhere near what I was expecting. I didn’t get the hype

(and yeah, don’t go there with how other people built it up for me… you all who waited all your whole life did it to yourselves, without someone seeing it ahead of you. work with me here)

Being a late-bloomer fan, I didn’t have all those many years of waiting and anticipating. So I just love the whole damn thing. And I make no apologies for it.

I didn’t have all those many years of waiting and anticipating.

This is really quite true. And, I’ll admit, it taints my view a lot. George Lucas waited so long to make these movies, with a ginormous fan-base just itching for him to get them done! So, he may have put himself in a no-win situation there…although, I think most of the blame rests on his access to seemingly unlimited CGI power at his fingertips that he forgot he was supposed to be telling us a story. 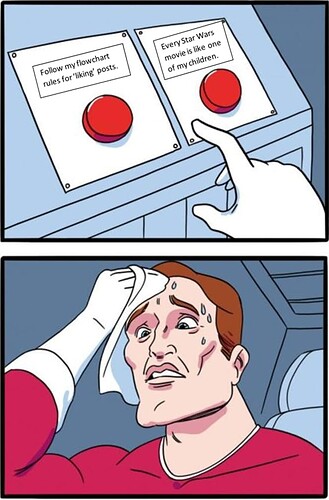 Yes, the more I re-watch them the more the CGI becomes a little eye-rolly. The first time through I was just taking in the story. Trying to absorb as much of the who/what/why, learn all the characters and creatures and all the stuff. Now that I have some of that in my brain, I watch it a little differently, and yes the CGI is over the top.

But overall I’m still really focusing on the story. Not what the story looks like on the screen. Maybe that’s why I’m more of a book person than a movie person.

You can have a kid and realize “they were a mistake”

people who enjoy episode one?

You can have a kid and realize “they were a mistake”

I agree with @Randall1028 in the case of the originals and prequels. But we differ on the Sequels. I (mostly) liked them. In fact (and I know I’m in a minority here) I had trouble deciding whether I liked Ep. 8 or Ep. 5 more. (Ultimately decided on 5). But the reason is because, Ep. 8 delivered something that I had been waiting for. We had Leia, who we knew had some command of the Force, but never got to see how much until Ep. 8, when she used it in a completely unexpected and surprising (I would say awesome, but my DS23 disagrees with me!) way…THEN, we get to see how much Luke truly was a Jedi Master, despite his failings. (I also liked how Luke was sort of like Yoda in Ep. 5, etc.)

Having said that, I totally get why others feel quite the opposite.

I felt Ep. 9 had potential, but that ending with the contrived ships in the “cloud” thing almost single-handedly ruined it for me.

Ep. 7? I just loved it. But in a more of a “this was such a good time” feeling. Of course, after it was over, I immediately felt I had been tricked, because it was essentially a remake of Ep. 4…but I think that’s partly why I enjoyed it so much…it was a bit like reliving my childhood experience of being initially exposed to SW.

Oh, yes. That goes back to the bad script. C3PO in the prequels was a travesty.

I liked the experience of seeing it when it was first released in theaters! I enjoyed seeing it with friends. I liked the fanfare. I liked that it revived a beloved trilogy in a new way. But the movie itself is garbage. I only rewatch it when I feel like I need to see the entire canon from start to finish and even then it feels like a chore to be completed. You can like having clean clothes put away neatly in your drawers but hate the actual folding process, can’t you?!