Poll Time! IP in the Parks?

At @OBNurseNH’s request, a poll (or five) on Intellectual Property (IP) in the parks and resorts!

For the uninitiated, IP is stories, characters, logos, trademarks, etc. In the context of Disney parks, an example of an IP-based attraction would be Frozen Ever After, Splash Mountain, or Peter Pan; whereas Maelstrom, Big Thunder Mountain Railroad, and Jungle Cruise were based on original ideas. Sometimes IP comes from an attraction, like Pirates of the Caribbean, or the upcoming Jungle Cruise film, but that doesn’t count as “IP” for purposes of these polls, since the ride came first.

If you had to choose, which of these two options would you prefer?

What do you think about the current level of IP in the parks and resorts?

Which of these ride themes do you prefer?

Which of these ride themes do you prefer? (Disneyland edition!)

Only vote if you have experienced both

How do you feel about adding IP to the resorts?

#4 is really hard. I loved TOT at DL, and was not happy about the change to GOTG. Then I rode it, and everything changed. Now when I ride TOT at HS, I think man they should change this to GOTG. I don’t like Marvel or Avengers, or superhero movies of any kind to be honest…but I love GOTG. It is such a fun ride.

I loved TOT at DL, and was not happy about the change to GOTG. Then I rode it, and everything changed.

I totally agree. I like having ToT at WDW and GotG at DL. If I had to choose one, I’d choose ToT. But having both is the optimal solution. (And DL’s version of ToT was never as good as WDW’s, so it’s the right sacrifice to make.)

I was going to include a cop-out answer on some of these polls (“I like them both the same”) but decided that everyone had to make some tough choices or it wouldn’t be as fun!

But personally, I don’t care so much whether the theming is IP or original. I just care that it is a good theme / story, and executed well. BTMRR? Awesome. DINOSAUR? … could be so much better.

That said, I voted for “more IP” because I think there are so many good characters and stories that are as yet untapped in Disney’s belt, they should try to use more of it. Doesn’t have to be the latest and greatest. It’s so hard to come up with a really good story and characters, so if they use IP the hard part is done!

I have to say on this one: 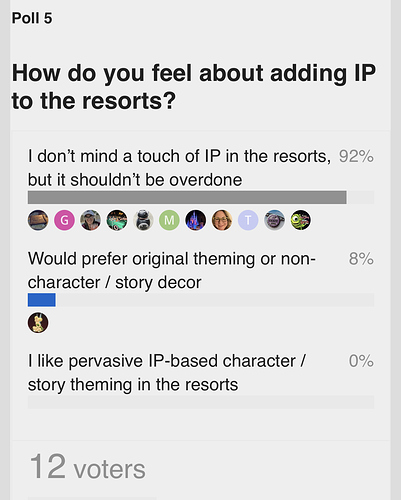 I question, moving forward, if Disney knows what’s “touch” means. If I could trust that it would be touches like the colors in Jambo- ok- but the CR was their flagship resort? I would also love to have someone explain to me the Mary Poppins/Beauty and the Beast connection in GF?

the Mary Poppins/Beauty and the Beast connection in G

I think they are going for Victorian era feel, which matches up with the style of Mary Poppins and BatB, if not the timing of when the stories take place. (It’s a stretch lol)

I would be interested in a sub-poll of how many who voted for ToT have experienced GotG. I do love them both, but hands down would choose to ride GotG over and over and over again.

Winnie the Pooh/Mary Poppins =England (?) BatB= France (?) or is that just a silly detail?

I’m so saturated with Disney characters, movies, and music that at this point I almost view Disney as synonymous with its IP’s. It’s what makes Disney Disney to me, so I say bring more into WDW. That said, where they are put, and how subtle or overt they are is super critical. I want creative ways to add touches here and there that are natural fits, like Moana in Poly.

I think this, but I tend not to be super concerned about the finer details that I realize are very important to other people

Sorry, the teenage boy that I still am is giggling on a work call now. Thank you very much.

But yes, they are completely ignoring geography and just going with aesthetic compatability.

It’s what makes Disney Disney to me, so I say bring more into WDW.

Yes.
Disney rides are kinda ~meh~ by themselves. Being INSIDE a movie you care for is another thing.
For example, just flying around in a boat would be ridiculous IMO. Add Peter Pan and I’m there for a reason.

Definitely. I want it to make sense.
But I could end up derailing this thread if I start sharing my opinions on where rides don’t make sense, too. Like how the parks are organized.
I’d rather it all made sense.

Fixed it and I will stop posting from where I am since obviously I can’t check my phone.

I usually encourage everyone to participate in every poll, even if they don’t have experience with everything, but in this case I think I’ll make an exception. I added this verbiage here. (Don’t worry if you’ve already voted.)

Only vote if you have experienced both

For the IPs at resorts… My opinion is the values and moderates can pull off the IP immersion more appropriately than deluxe. Art of animation is a perfect example. And conversely, the contemporary. From what I’ve seen the incredibles overlay is not overdone, but what the heck does it have to do with that resort. And incredibles character meal at the wave. It just doesn’t make sense to me. It devalues the resort in my mind. I’m actually more on board with the discombobulated grand Floridian IP mish mash. Moana at poly makes sense, I’m good with that one.

The ToT one is so hard bc I prefer the ToT theme, but the GotG ride is much more fun.

incredibles overlay is not overdone, but what the heck does it have to do with that resort.

Contemporary… mid-century modern. The whole Incredibles movie was on that aesthetic

GotG ride is much more fun.

It might be too much fun. I wrote it five times over the course of two DCA park days (had four day hoppers) and yet we missed doing some other things even once. It was kind of addictive.

Haven’t been to DL in years but if that ride was Guardians of the Galaxy: Mission: Breakfast
well, I’d vote for that all day every day.