Please give advice for Magic Kingdom plans with toddler

My husband and I are taking our almost 3 year old to WDW at the end of April. We’re staying at Beach Club Villas with rental points and will rely on Disney transportation with some Uber/Minnie Vans. We’ve both been to Disney many times (last time was 2013) but never with a small child. Our son is very laid back and loves theme parks, we go almost daily to a local park during the summer. He naps at home but on days when we travel (like taking the train to the National Zoo) he does not nap.

Here are our plans for the rest of the week:

Regarding day 1, you don’t give yourself a lot of wiggle room. For example, “Chesire Cat” you only give 5 minutes total. Same with Sunshine Tree terrace. What about potty breaks? You might want to build some breaks in, or change your walking speed to relaxed and re-evaluate.

Tom Sawyer’s Island you have 30 minutes, but that’s only enough time to get across the river and back and almost no time to explore. I’d switch that to at least an hour…or drop it entirely. (I love TSI, but fitting it into a single day in a way to do it justice sometimes makes it questionably worth doing.)

You also have times where you have quite a bit of free time. Personally, I like to make the free time “explicit” in the plan by inserting a break that shows what you will do with that time. The 35 minutes after Aladdin, for example, you might insert a break that says, “Find spot for parade.”

All excellent ideas! I don’t know why I hadn’t thought to actually “use” our free time on the plans. Also, thanks for pointing out the timing issue with Tom Sawyer…in my head I was thinking 30 minutes once we were actually there, so I’ll have to recalculate. I know my son is going to LOVE the downtime running around so I will make it work!

40 minutes for Be Our Guest might be optimistic, because you have to factor in potentially waiting for line, some time for them to bring you your food, and then eating. I would probably bump that up to an hour.

Do you have a plan for things that you’re willing to skip if it doesn’t all go to plan? We went last year and our youngest was the same age, and I tried to have at least 3-4 things a day that I was willing to let totally drop just in case.

Day 1 when you tap in for using your 3rd FPP, try to get others, especially Tomorrowland speedway—there is no worse line in all of the World and your kid will likely love the ride, so make it as painless as possible. Also usually easy to get POTC, Magic Carpets, and JC which your son would probably like as 4th, 5th, etc. FPP.

And the way day 1 is set up, you could spend as much time as you want on TSI as you have bathroom, snacks, shopping, and CBJ after that and before the parade, easy to push back if needed.

That’s a great idea to have a skip list! I’ll have to come up with that, especially if he requests certain rides multiple times.

Hadn’t thought to get the 4th FP+ for Tomorrowland Speedway, thanks for the idea! I’ve thought of using later FP+ for either Aladdin or Jungle Cruise…should add that note to my plans. Thanks!

Your ambitions are super envy-inducing. I have 2 6 hour stretches at mk planned with our 18m old and I’m worried. We are going left one day and right the other, no repeats and no characters. My hope is that I have overestimated things and that we can fit in stuff that’s not on the plan.

We went when our son was almost 3 and skipping the nap is a good idea. We didnt and he actually napped 1 of 5 days.

The whole shuttle back to airport thing, is that bkz you wont have a carseat? Are you staying on points?

I planned repeats based on what I think he will love (and tbh, my favs too- who said this trip is just for him?! hah) I might cut the Circus pals character visits given how many character meals we have planned and of course if he hates them. At our local theme park he doesn’t mind the characters (Peanuts and the Gang).

As for napping, I may be naive but it seems like a waste of time to travel to and from the resort and park and like you said, that nap isn’t guaranteed!

For the airport shuttle, we won’t have a carseat. I’ve heard good things about Lyft Family, but that long of a drive makes me nervous with a seat I don’t know and I know DH will not splurge for a Minnie Van from the airport. Yeah, we’ve rented points,-a little nerve wracking, but if all goes planned we saved a ton of money!

Gotcha. The carseat rideshares only operate from major sites to major sites anyway, so I think youd have to go back to the airport to get one… sounds like a bast, have fun!!

@ryan1 & I usually agree about needing breaks in plans. Too many ppl have the “perfect plan”, but forget that at some point someone is going to need to pee or get distracted. Glad to see you’ve made some updates since the first post. IMHO – ppl need a 10 minute break every 1.5 – 2 hours

I see you gave yourself 40 minutes for Tom S.I. now. That’s 30 back and forth and 10 to play… Still don’t think that’s enough. Go to 20 minutes to play. You can always stop earlier if you child isn’t interested. It’s harder to “add time” back into a plan than cut it. I also see you did a bathroom break as an additional step while there. I’d just roll that into the time and add a note to that step as a reminder.

This is a long day for a toddler. I see you put a long break on day 2. I’d suggest it for day 1 as well. I’ve worked in theme parks for years, your little one is going to be worn out / overstimulated by the time the 3pm parade happens. Allow for 1 hour, each way, to get to/from your hotel – if you are using WDW buses.

My overall concern for day to is your eating durations. IMHO – each step where you eat is at least 5 – 10 minutes short. You’ll be surprised how long it takes to “grab” something “quick”.

Step 5 – add 10 more minutes (at least – more if you are sitting down to eat a snack) I wasn’t sure if you were just going there to see it or dine.

Step 22 – Fine. 40 minutes is reasonable if not too crowded

Step 23 – If you are using mobile order to get your Dole Whip this should be OK. If you are going to wait in line I’d make it 10 minutes

who said this trip is just for him

This, over and over. I know as a parent we love to see our children happy…but when they are young, even as old as 5, the fact is they won’t remember much about the trip in a few years other than what you capture with pictures. As such, I think it is MOST important that you do what YOU want to do. Young children will enjoy any of it, and ultimately learn to like what their parents like. But if you make a plan that caters entirely to them, I think that might cause more problems in the longer term.

So, for example, in our family…we just don’t do character meet and greets. Well, we have done a handful over the years, but it just isn’t us, and I hate the idea of spending hours of an expensive trip just to stand in line to see a character greet they won’t really remember. (Now, I realize that others have different feelings about characters, which is perfectly okay…just illustrating my point.) But we basically insist that our kids learn to like roller coasters as soon as they are able to ride them! Why? Because it is what WE like.

Thank you for the insight on eating! I haven’t been to Disney in 6 years so my memory is hazy on waiting for food. I was just planning off how long it would take at home. I’ll update accordingly!

I definitely see your point about a break on Day 1…I just hate the idea of wasting time going back and forth. I’ll make a different plan that would account for that and see what I think and we could utilize it as needed.

Thanks for the validation, some people get a little fussy when you say the trip is about the parents

And you make a great point about the Character Meet and Greets…IMO they’re okay, but I’m much more of a rides-type. AND we’re doing tons of character meals so I’m going to cut the Meet and Greets. Thanks!!

I won’t comment on your plans, as I think others have covered those pretty well. I’ll only say that, based on our several trips in the last 2 years with our kids ages 2 and 5, your plans will change constantly. They might be scared by rides that you’d think they’d be ok with, or bored with rides you’d think they’d like. Then, they want to spend 30 minutes chasing bubbles in front of the souvenir stand. Or they’d rather eat ice cream than ride dumbo. It’s hard when you’re spending $1000/day to be there just to watch them chase bubbles, but I try to remind myself the trip is for them

(btw, we’re fellow Liners from the DC suburbs and love the zoo!)

I always love seeing what ends up being DS “thing” when go on adventures like this.

I just hate the idea of wasting time going back and forth.

I totally get it. If you have it in your budget consider doing a ride share - Uber / Lyft / Minne Van

They can pick you up at, basically, the same areas as the WDW buses. However, they’ll get you right to your hotel in half the time. It’s even quicker if you already know how ride shares work and feel comfortable ordering one as you are walking out the gates.

If you use a Minnie Van ($25 each way) they pick you up right here: 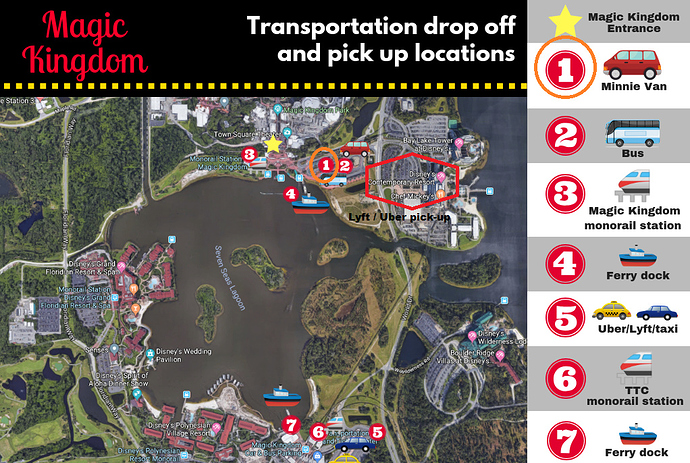 If you want to save about $10 you have to walk from MK to the Contemporary Hotel to be picked up.

This map is incredible, thank you for sharing!

No worries! I just,now, highlighted the important areas to make it easy to understand.

Instead of planning to go all the way back to the hotel for naps you could try to just schedule some more ‘down time’ type activities for the middle of the day. I had plans to one day go to Tom Sawyer Island and just try to find a quiet shady area for a stroller nap, and the other day take a boat to the Poly to relax in the lobby for a while for the same stroller nap - seemed quicker than going all the way back to our hotel. My almost three year old ended up not napping at all, but that just meant we had some extra time to play with.