On my last trip, I was asked how I go about “planning to Park Hop” and I also see threads popping up every once in a while where people are unsure how they want to approach such an ability. So since I have new trip coming up (that’s juuuust about to get underway for planning). I figured it might be interesting to some to see what I do. Hopefully, you might be able to find some inspiration on how you want to undertake your own planning.

Step 1: Which park, which day.

After I figure out my time frame (in this case, first week of december) it’s then down to see what the parks’ hours are and what their CL is expected to be. To do that, I have TP track those days and select every park. 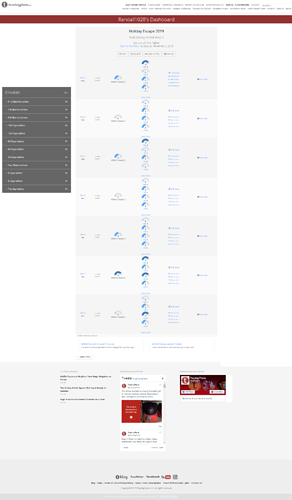 Oof, looks like crowds are going to be heavy this year. Now, usually, my trips start with being in MK. It’s just where I like to start, but with that being an 8, I’m not sure that’s where I want to start this trip at.

while I don’t pay TOO much attention to CLs, I do use them when they’re at the extremes of the spectrum. A 3 vs 8 will feel very different, but a 4 vs 6 …not so much.

Epcot is looking like a 3 on Monday, so let’s slot that in for our starter. At this point, each park is blocked out to have its own day. So at first glance, it looks like

But we now have to factor in that I haven’t done HS yet and SW is there(must see)…sooo we now need to pick out a [currently expected] low-crowd HS. Looks like Monday is lowest number of the week. That might just work out perfectly.

So instead of EP, let’s switch out Ep for HS as the starter. And slot EP in for Wednesday morning, and AK for night(I personally can’t do AK for a full day and I love it waaaay more during the night). Aaaaand we have our first Hop planned.

Obviously more changes needed, but for now, let’s get the schedule-sheet and load in current-known hours, parks, and activities. 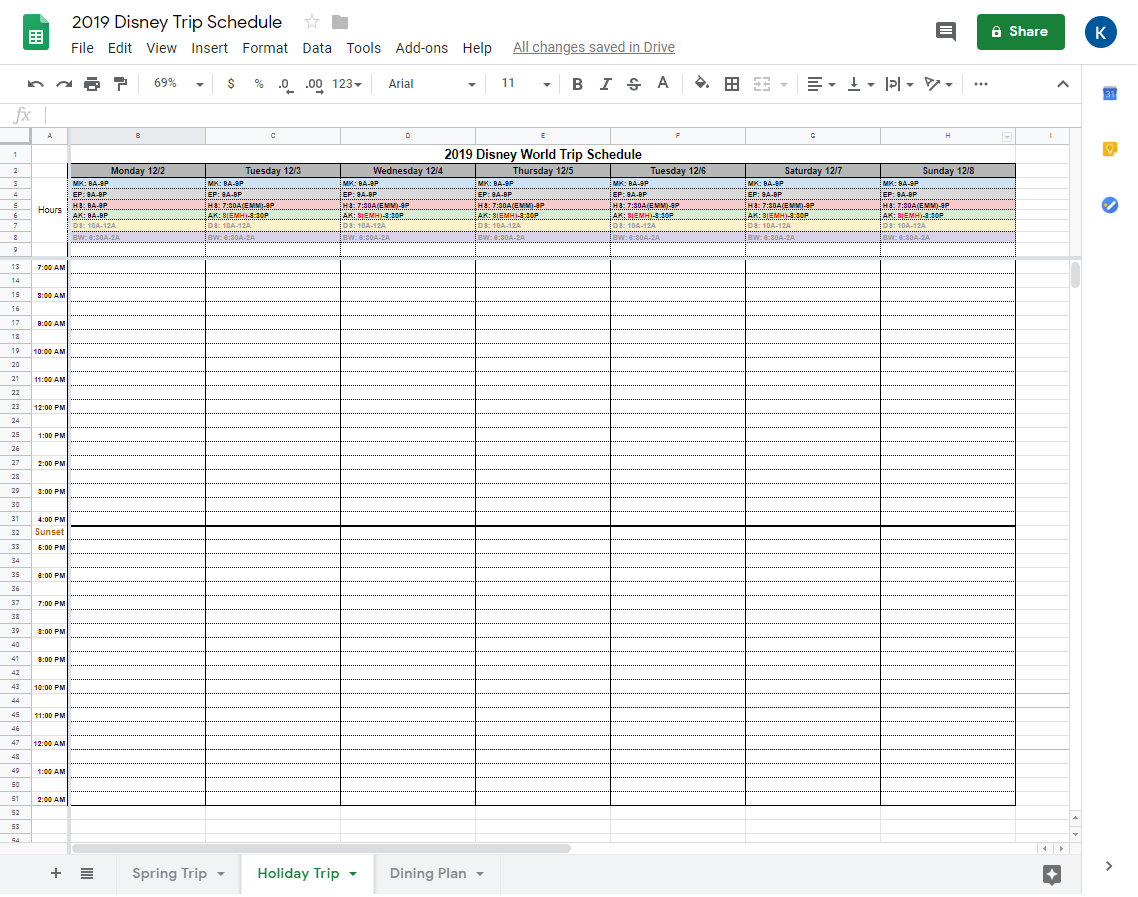 This is the empty version. (Shamelessly stolen and modified from @JJT)It has the hours at the top, and then broken down into half hour increments. This is about as granular as it’ll get. 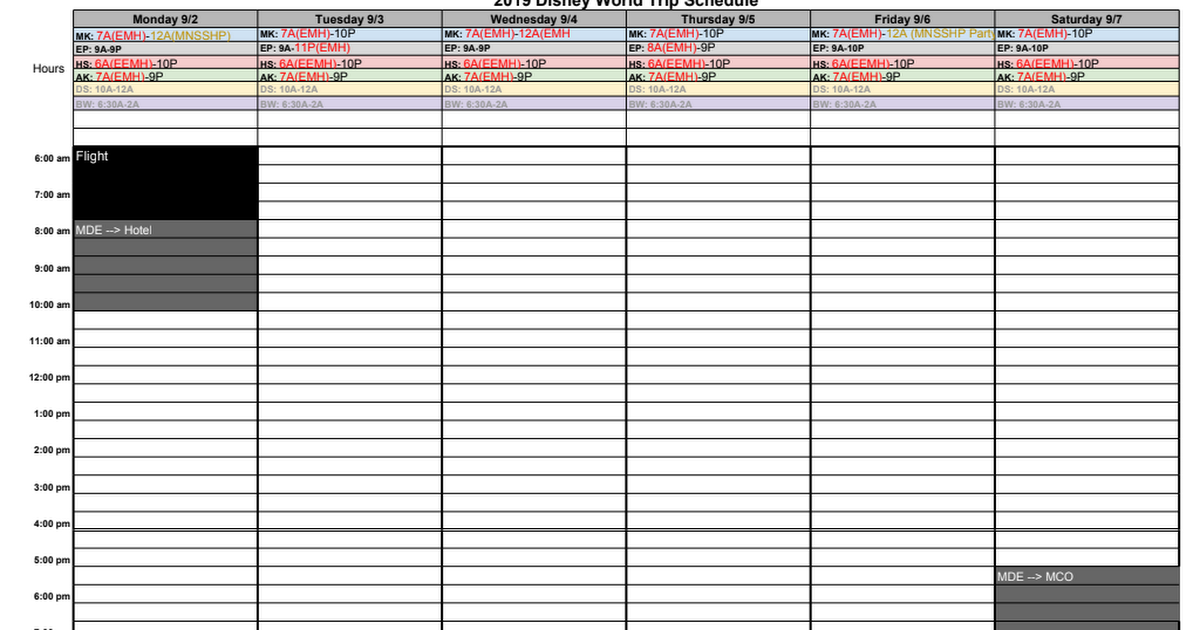 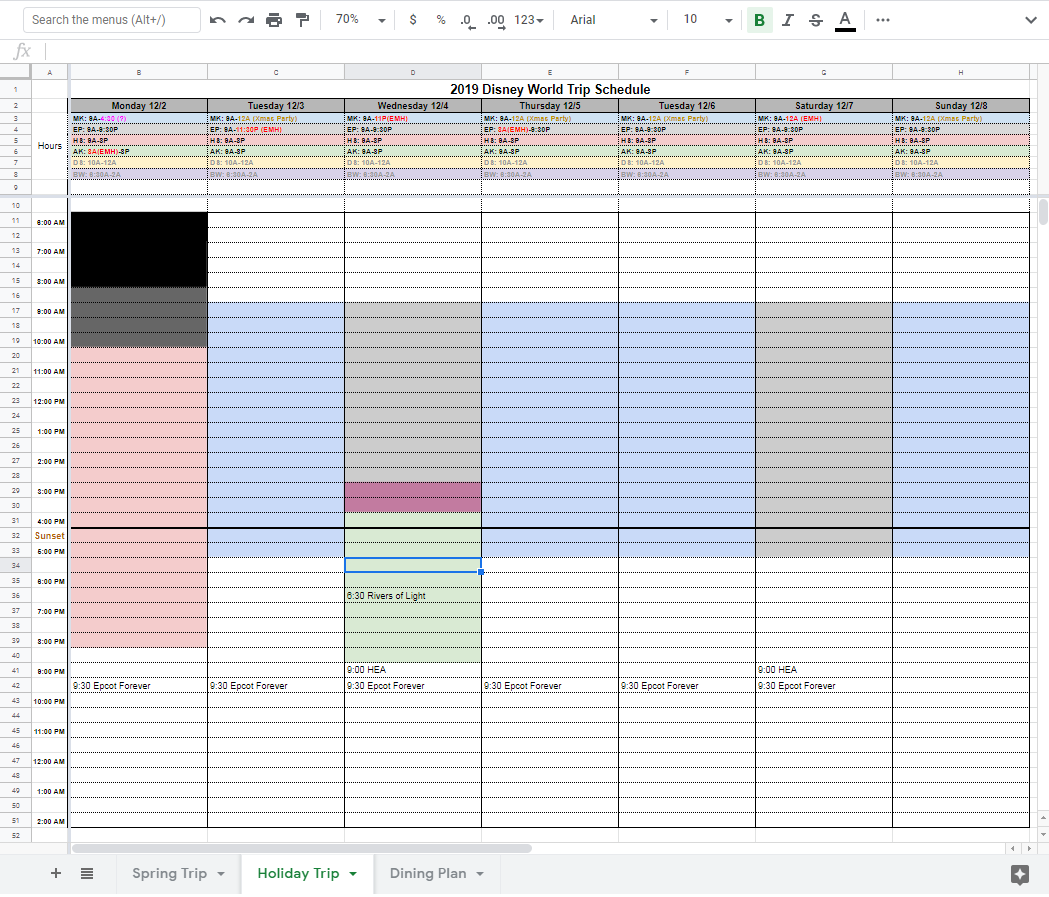 MK – Ok, so known hours are only up to the 5th right now (and even those aren’t 100% as the app doesn’t even go into Dec yet, and SWGE hasn’t even started its recordable impact) but already looks like I’m losing a LOT of MK nights to the Xmas party. For some reason, on Monday MK is shutting down at 4:30P. Not sure if that’s going to stick, but if it does it looks like I might have to bail on MK all together. While I intend on visiting one night of the Xmas Party, certainly can’t do all and so we need to make some adjustments already for night time.

HS – I’d be an idiot to think that HS’s hours are, at all, solidified right now. SW is going to have those hours expanded greatly, I would imagine. Additionally, it might lead to the other parks getting extended hours too. But for now, we’ll work with what we got.

Currently, our mornings are roughed out. But this will change at the 180-day mark (which should be this weekend!) when I can snag my prelim ADRs. As per my usual, I want to get at least 2 BOG Pre-park-opening breakfasts and we’re looking real good to do that right now.

(this will be an ever evolving document until I feel further changes will not be helpful.)

thanks for sharing @Randall1028! planning is a part of the process i enjoy so much especially when it comes to color-coded spreadsheets! (i may or may not have a few of my own.

) looking forward to seeing how it comes together!

As of right now, we have the same plans for Monday, Tuesday, and Wednesday. Even the PPO at BOG and EP to AK hop!! We will be at MK on Thursday too, but only for the party. We should probably have a business meeting at some point

Sadly, I’m fully expecting the PPO Breakfasts to be a thing of the past until SWGE rage dies down. We’ll see.

I’m holding out hope. For EMM too. At least it seems there will possibly be some DAH.

Thanks @Randall1028
I am 2 days out from leaving for our trip, so no more planning for me.

I will need lots of watching other people plan to get me through!
Love your spreadsheets.

Flight was booked this morning(after stalking the site), so now I know my arrival and departure times from MCO. I can also start the process of Magical Express as I have my flight numbers. This can be done either by phone or by website (I recommend phone because I like the vocal confirmation). I’m flying Southwest because… it was free(ish) with points.

Solo-Traveler tip: Always go for the Early Bird boarding with Southwest when traveling alone. It’s only 40 bucks (for the whole trip) and it automatically checks you in, allows you to have your choice of seating without worry, and the likelihood you’ll be bumped to another flight drops to near zero. $40 for ease of travel? Yes, please.

TP has also indicated that EP’s expected EMH is now over in MK. So we’ll be updating our Schedule Sheet with the new info. At this point, we’ll likely only revisit/worry about hours once a week to make sure it’s up to date. 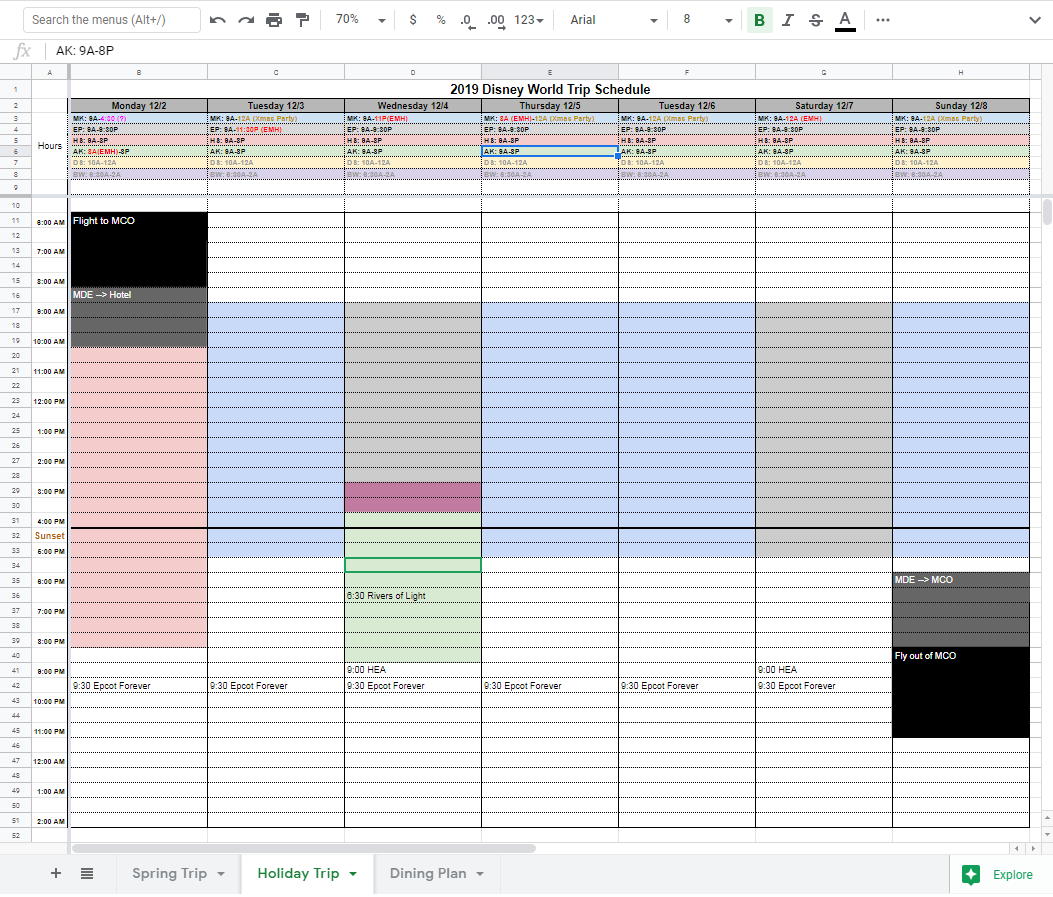 The next step is finalize where I want to eat throughout the week. I have some ideas, but it’s just a matter of determining which ones are “must dos” vs “that’d be nice to do.” Keeping in mind Epcot has the Festival of the Holidays happening during this week so hopping over to Epcot for a meal is very possible.

The hardest one will be the last day(always is for me). As I chose an 8:30PM flight, I’ll be in the World until 5:30 at the latest (with the Holidays and SW, they might increase the MDE time an hour and I might need to be on MDE by 4:30). So I need to figure out where(and when) I would like my final meal to be.

TP has also indicated that EP’s expected EMH is now over in MK.

Can you clarify what you mean here?

Yesterday, the Extra Magic Hour was expected to be in Epcot. This morning’s email from TP now indicates that EP won’t have one but MK will instead.

I already had that on my calendar, I don’t think it’s a change.

Possible it was a reversion? It definitely was there yesterday and not there in MK yesterday for TP’s tracking. No matter, like I said, the hours are hardly solidified right now. Once we’re a month or so out I expect hours to be more locked in.

Yet forces us to do it! We should boycott!

YEAH, you should boycott! Tell everyone not to go!

Could you send me this blank spreadsheet? I know I could make it, but I am all about saving time

Ok, i’ve been trying but … uhhh I have no idea how to do that. I’m not great at google sheets’ sharing abilities.

I’m cracking up here. Been planning park hopping trips for years, many times with some in group going here. Or some eating there. Split stays, some staying first part of trip, some last part. It’s all fun.

BUT I can not imagine doing some of the screen shots, etc, or even just including part of a post that’s being responded to. Pictures with captions.

Ok I think I finally figured this out. Hopefully it works

Totally stealing this! And my trip starts 8/30-9/8 so the blank is already setup for me. Thank you for sharing!!!