We have an appt for our MNSSHP day at Pirates League. I read the description for what the boys will receive and my DH suggested yesterday that we should get pirate costumes for the boys to wear. Do they sell them there as part of a package and if so does anyone have a general idea of the cost? The description said they will each get an eye patch, a bandana, a facial effect, a necklace and a sword. Any thoughts or suggestions for this experience? We are going to the party on 10/28 and our appt is at 4:10, my boys are 7 and 3. Thanks!

The extras were pretty pricey and our sword broke within a day. Personally us bring a costume. It’s expensive enough!

Also think about the heat. I wore a full costume, but DS11 opted for shorts and an artfully ripped t-shirt that I had created with a pirate mickey iron-on.

Also, if the 3 year old gets the Jake make up, you may want to do a similar costume for him. 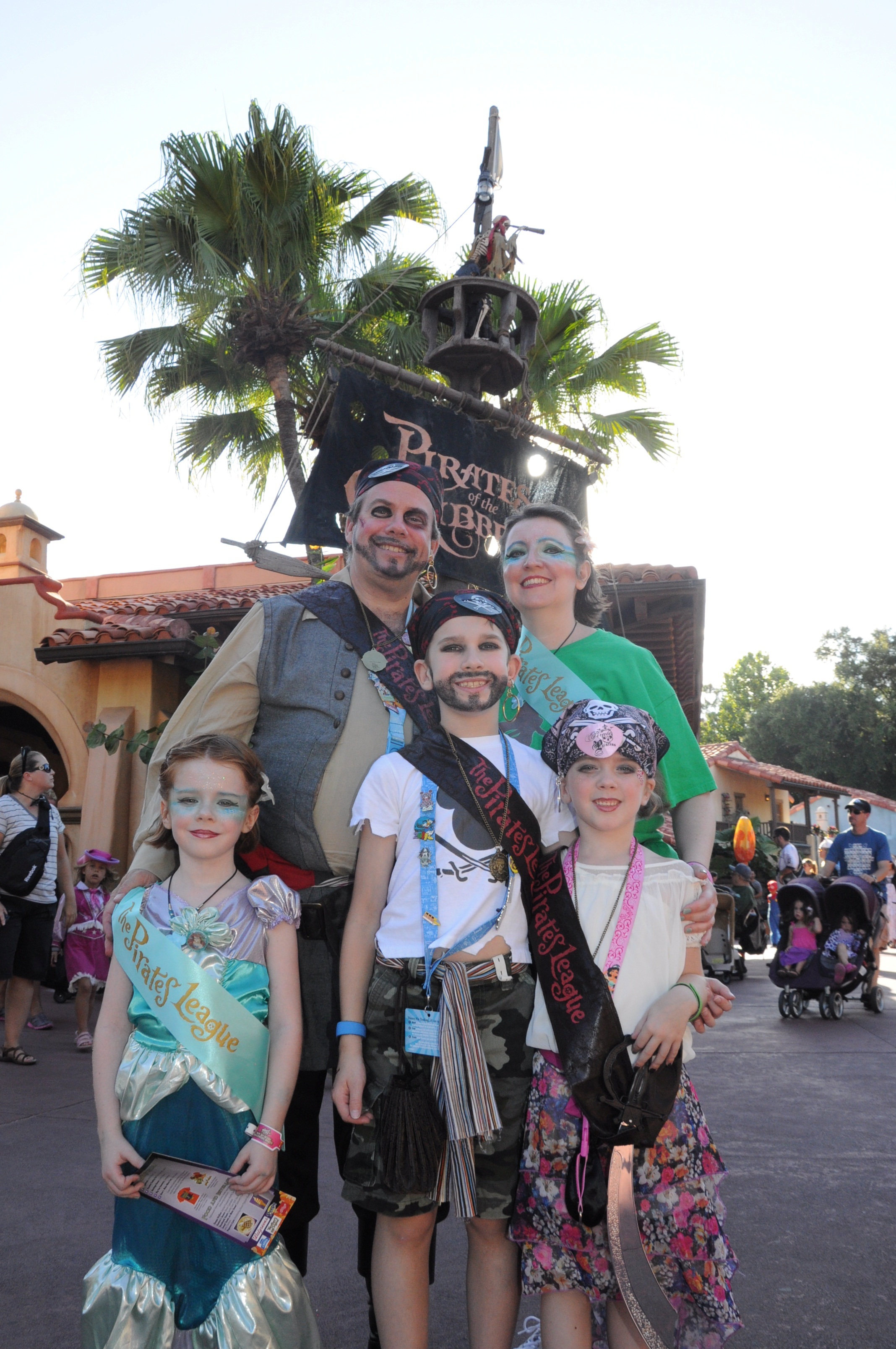 Thanks for the tips @docmcstubbins and @Agent_C. I really like the idea of the pirate t shirt and shorts for the boys. The last time we went at the end of October the temp was still in the 90s most days.

that’s really interesting that you were able to get a 4:10 appointment. When I looked on the Disney website, it says that the league is open til 4pm on most dates in October which I thought was a real bummer b/c you can’t get in until 4pm on a party ticket. I would like my son to do this maybe next year for the party while his sister does BBB. Has anyone else gotten an evening appointment during MNSSHP? And also, DS will be 9 then, do you think he’s too old for this and roughly how long does it take?

The normal appointments end at 3:45, I believe. However on party nights they extend it, I think at about 60 days out. They’ve done it for at least three years running. We went to the first party, so I started calling every day from the beginning of June until it opened. I was repeatedly told it wasn’t happening, but persisted until I got it - I think about the time the food and wine stuff opened. Call the pirates line directly 1-407- wdw-crew.

@mjsmomma My DS10 loved it, so I think a 9 year old would to. I would plan on a hour, especially if they get backed up.

Pictures were also included in photopass, so I expect memory maker as well

thx @Agent_C - I actually called this morning after I saw your post and the CM at the wdw-crew number was very nice and helpful. She said that the Pirates League does stay open til 7 on party nights but that it is very popular so that I should call and definitely book at 180 days out. It didn’t dawn on me at the time I was speaking with her, but the party dates aren’t known 180 days out usually. So I guess as soon as the dates come out and we know which one we are going to, I will just start calling right away. thx for posting about this or I would never have known it was even an option to do this! I think it will be fun for my son to do it while his sister is at BBB!

They don’t extend the hours right away with the announcement of the party dates, so I called every day until I got it - my daily 7am call

Don’t get discouraged, even if they say there’s no availability. Just keep trying. It took some effort, but was totally worth it.

For my son’s shirt, I searched “pirate Mickey” for the image. Or you can PM me with your email and I can send the jpeg - I think it’s still on my computer. 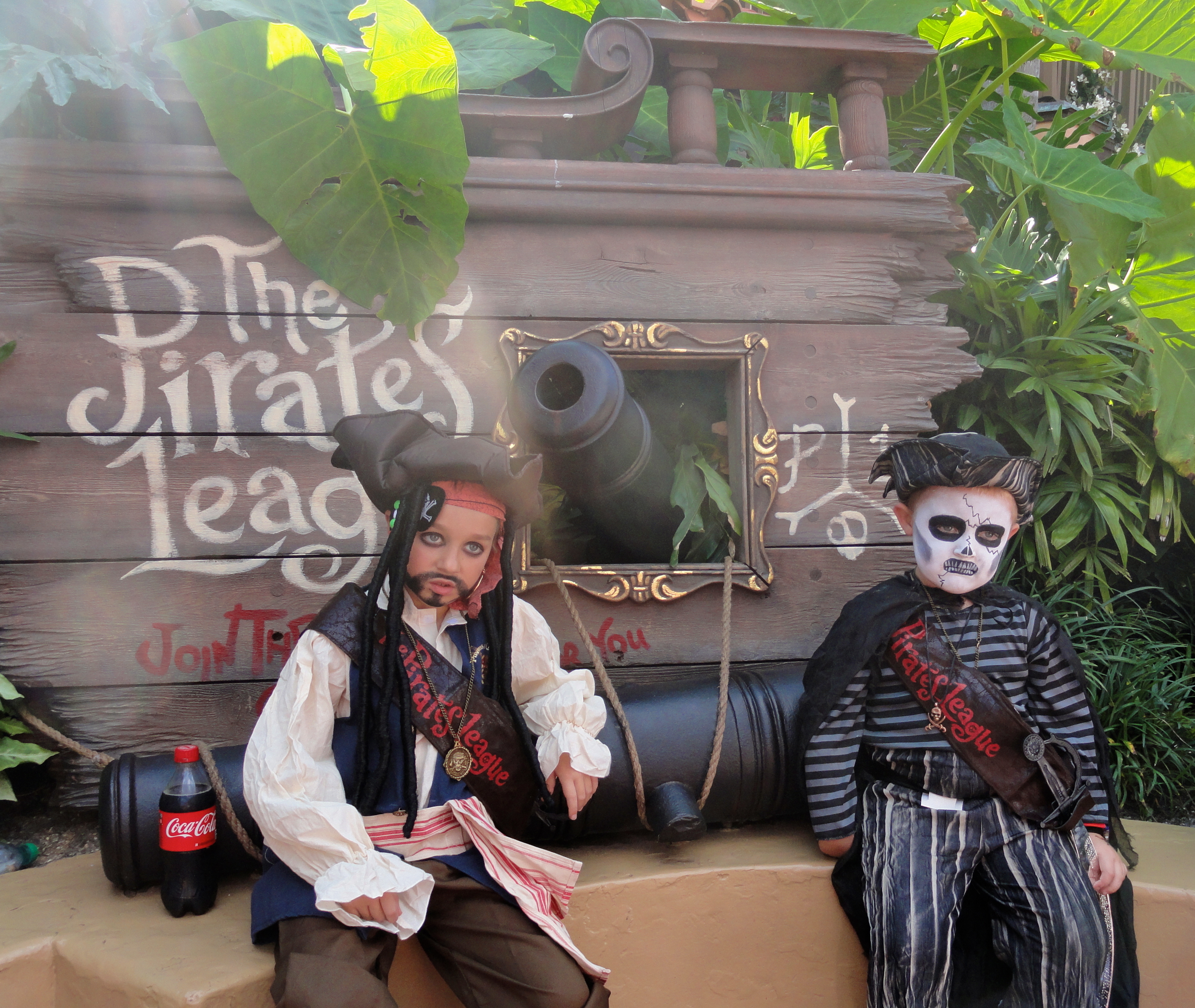 Definitely easier/cheaper to bring your own. My nephew (on the right) brought his costume, whereas my cousin (on the left) purchased one. They both look amazing (however tired) but one was significantly cheaper. I’d only go with the costume from the Pirate’s League if you specifically want to be Jack Sparrow. 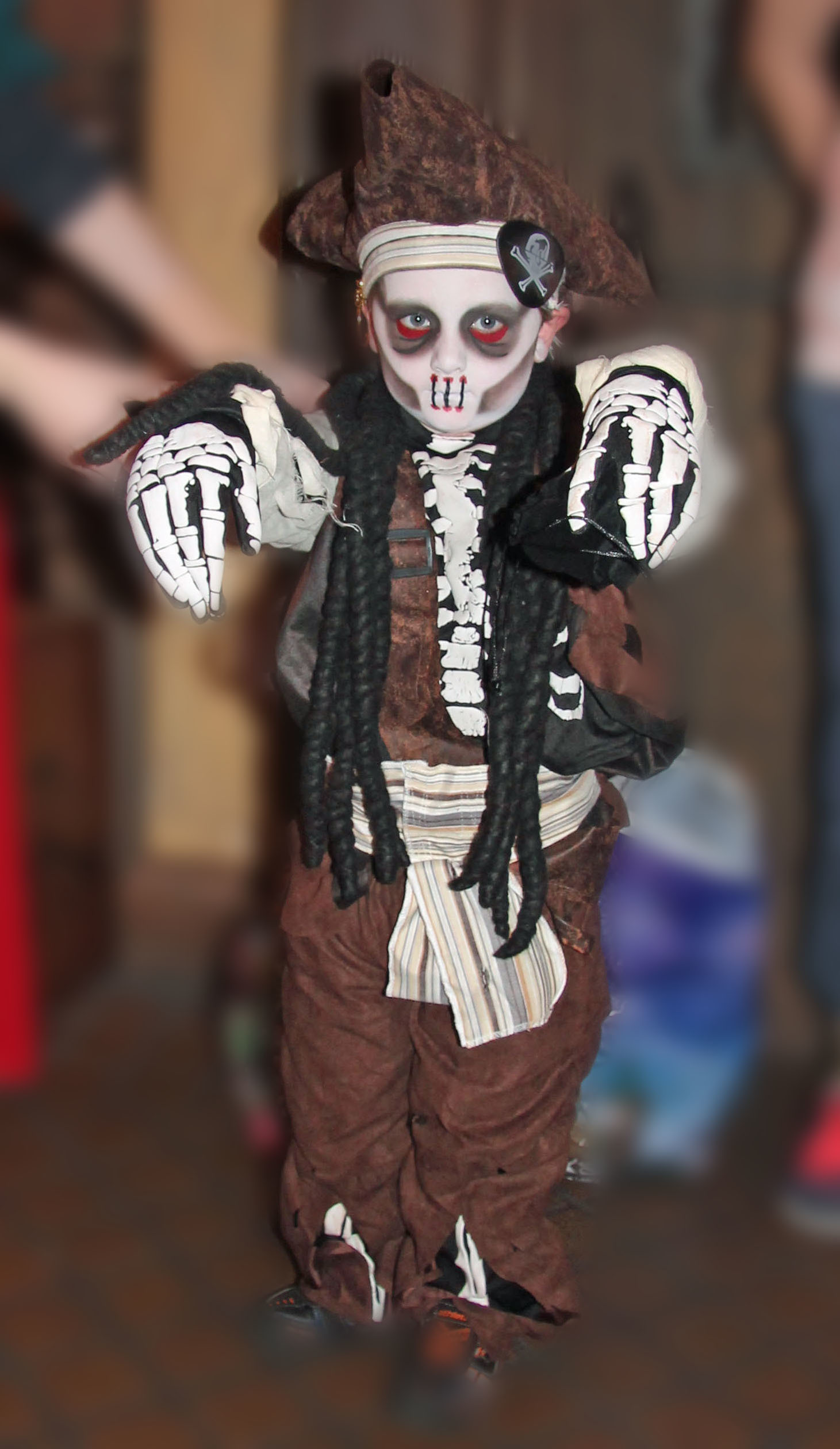 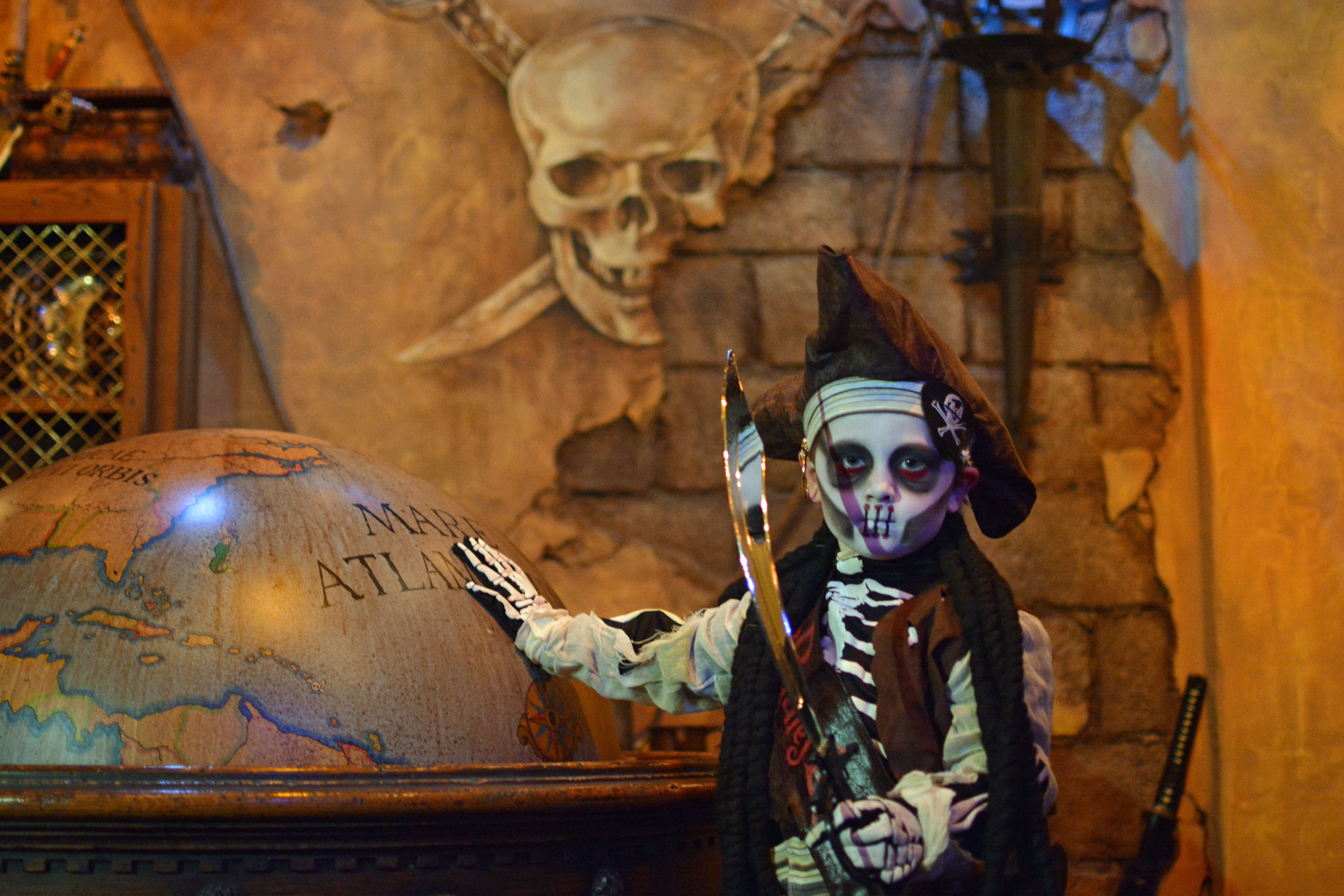 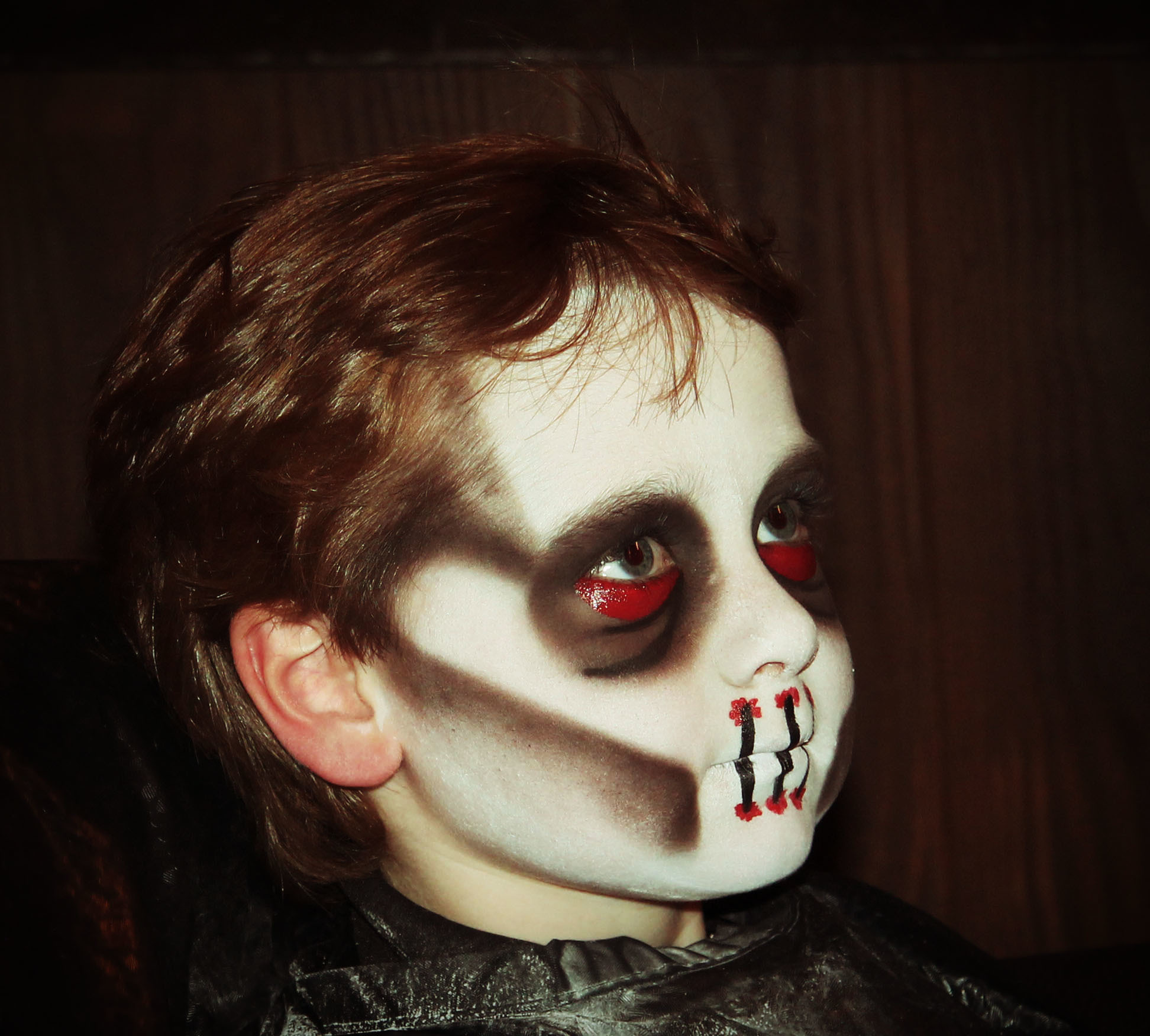 I’ve heard such great things about the Pirate League. Looking to include it in our touring plans for our upcoming trip. I was curious about how much time I should allot for this activity.

At least a hour.

The Pirate League rules. DD9 has done it twice and requested that I do it with her next time, which I will!

Definitely put together an outfit before you get there. The designs are very limited as you might imagine and certainly overpriced. (Same thing goes for BBB. Always buy at home and bring with you if you can!).

The CMs at PR are really into the characters. They are definitely on the salty side!