Just wondering if anyone has stayed onsite with their pet yet. If so how was it? Or has anyone seem pets onsite yet?

If not a resort, has anyone used the overnight kennel onsite? Their website makes the place look great! We have a small terrier, just in considering stage of taking him on a trip!
Thanks!

There was a touring plans blog about staying onsite with a dog. With Disney making several of its on-site resorts dog-friendly, it was time to take Man's Best Friend up to the Yacht Club to see how it was.

If you want a laugh, read the comments at the end.

Thank you. I searched the forums but didn’t think of blogs.

Dreams Unlimited Travel just did a 2 part podcast about Best Friends petcare and staying in the different resort with dogs. Episodes 97 & 98.

I’ve had co-workers come back from a trip at the Yacht Club in which they thought that the dogs were supposed to be in a designated wing, but the dogs were allowed to be walked right on the front pathway area where the door goes out to the water where there are tables. They also saw one dog on a piece of furniture inside the main lobby, and when they said something to a CM about it, they did nothing. The dogs are not policed like they should be and it’s pretty ridiculous.

I’m staying at the Beach Club and would not book at the Yacht Club (for me personally) for this very reason.

Not paying roughly $8,000 for a nice vacation to have dogs barking and having to watch where I step. It’d be one thing if the owners kept the dogs in their designated areas, but CM’s don’t say anything when dogs are being walked right in the main path where lots of people are travelling.

Keep your dogs at home or put them in a dog hotel while you’re on vacation.

The dogs are not policed like they should be and it’s pretty ridiculous.

Neither are the children

I think it is sadder that guests NEED to be policed with their pets far moreso than the fact that CMs may not actually be policing them. It shows a lack of respect for others in general, at best.

Generally, though, we avoid places that allow pets because three of our kids have allergies to dogs and/or cats. This is the reason there is an extra charge for guests who bring pets in hotels that allow them…there is a great deal more work to ensuring the room is adequately cleaned to prevent affecting subsequent guests from reacting!

From The Cartwright Hotel in San Francisco: 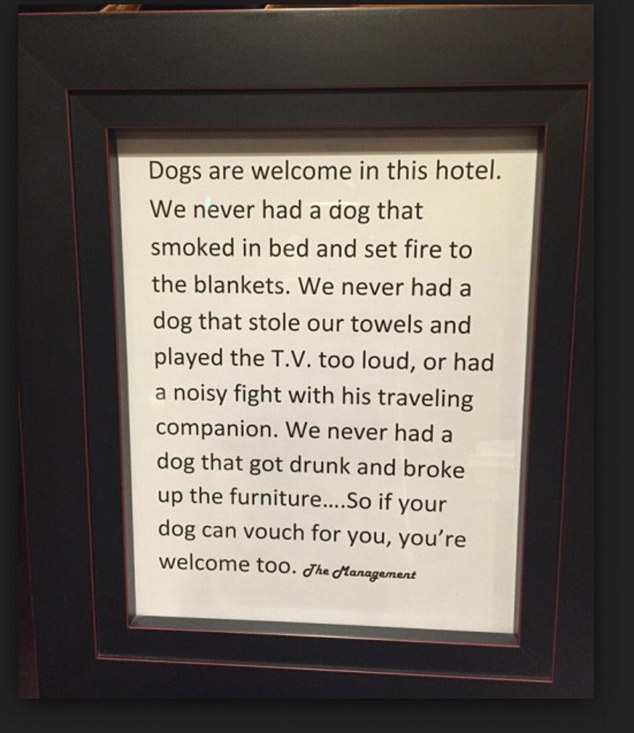 Despite the tongue-in-cheek nature of the sign, it is rather meaningless. People also don’t bark in the middle of the night, leave dog-hair behind that other guests can react to, pee/poop on the floor (well, this one I can’t be certain of!), etc.

Ryan nailed it. I love dogs…ALOT…but not while I’m on vacation and spent a ton of money.

If I went to a Holiday Inn Express for the night and spent $80 for the room, no problem, but I’m spending a great deal of money for a relaxing vacation.

Also think about this. You’re leaving your dog alone in a strange room in a strange place while you (the dog’s master) is out and about in a theme park for 7 hours or more. Most dogs are going to be on edge and if they hear other dogs barking, they’re going to get even more excited.

I cannot say what CM’s do at other resorts but at the Yacht Club, the “dog policies” are not enforced like they should be. I’ve had more than one person go recently and tell me this on their return home.

I have no problem if the rules are strictly enforced, but they aren’t.

People also don’t bark in the middle of the night, leave dog-hair behind that other guests can react to, pee/poop on the floor

Dogs don’t slam doors in the middle of the night, or get so drunk that they throw up all over the room. Dogs don’t flood the parks like the notorious Brazilian tour groups apparently do. They don’t hold up iPhones and iPads during HEA, blocking other people’s views, or hoist their children onto their shoulders.

The implication of some of the posts on this thread is that because there are some bad dogs — or, rather, bad owners — all should be banned.

There’s also an unhealthy dose of massive generalisation going on, too. I rather get the impression that YC is strewn with dog poop, deafened by dogs barking, and littered with the wheezing bodies of people keeling over through their allergies.

In the UK I only ever stay at dog-friendly hotels and I only ever stay in at least 4* properties. I’ve never, ever, ever heard a dog bark in the middle of the night in a hotel. I’ve never, ever, ever seen dog poop inside a hotel or near the walkways. I have been woken up by drunk people returning to their rooms late at night, and by earlier risers thoughtlessly slamming doors in the mornings.

Twenty years ago I was having lunch with a friend and she was distraught because her cat had recently died. I didn’t get it. I said, “What’s the problem? Get another cat.” Apparently that didn’t help.

Now that I am a dog owner, I get it. My dog is 100% a member of my family and I’m not leaving him behind. He comes with me. Well, OK, not when I fly to America because of the impracticalities of that. But he stays in my home, looked after by people he knows. But on all other occasions he stays in hotels with me.

If someone can point me towards authenticated accounts of dogs barking in Disney hotels — and not just a quick bark because someone knocked on the door, but sustained barking that causes legitimate irritation in other guests, then I’m interested to read those accounts. But if all anyone can do is dream up hypothetical nightmare scenarios, then I’m not interested.

As for dog poop, let’s see some photos of how the landscaping and pathways are littered with it. And then I’ll show you photos of toilets at WDW where people have peed on the floor, or on the seat, or not flushed, or . . .

Live and let live. Dogs are allowed in some rooms in some hotels. Dog owners pay a huge premium for this.

If I lived in the US, I would for sure take my dog to WDW. I wouldn’t leave him in the room all day, I’d take him to daycare. And I can promise you this — you won’t hear a peep out of him, unless you knock on my door. And I always, always, always clean up after him.

Don’t tell me other people are different. Because humans are every bit as problematic at WDW as dogs (allegedly) are.

And, actually, while I’m on a righteous roll, tell me about these allergies. I get hayfever. I’m not petitioning for trees and lawns and flowerbeds to be banned. I take medication to deal with it.

Last stay at the Boardwalk, we were woken up every morning and in the middle of the night by our screaming neighbors who were yelling, swearing and slamming doors. It was the most miserable experience I’ve ever had a Disney hotel - and CMs didn’t want to do anything about this situation either. Bad manners exist - and can be experienced by people and canine alike. I personally don’t have any issues with the dogs in the hotel - I wouldn’t bring mine because he’s one responsibility I am looking to get away from (and he likes hanging at my parents more than hanging in a hotel room) but I choose to believe most people are good dog owners…just like I choose to believe most of my neighbors won’t be like the horribly rude ones we had last time.

he’s one responsibility I am looking to get away from

Funnily enough, I can actually really relate to that. My dog is with my all the time. Literally all the time. And I am completely responsible for him. There’s no let-up.

Although I’ll get a little tearful when I drive away from my home and off to the airport, I’ll also feel a sense of relief. I can go wherever I want without worrying about whether dogs are allowed. I don’t have to think about taking him for a walk or feeding him.

Don’t get me wrong, I love Jack…but it’s nice to get away every once in a while! And he’s always so thrilled to see us when we come back! (as he is pacing in front of me because I’m working from home and he wants to go out every 2 seconds…yes, I love him…)

If a person who is drunk is disorderly, the police can be called and that person dealt with. You cannot “deal” with a dog that barks or poops or has crappy owners.

And just because you have not personally heard a dog bark in the middle of the night doesn’t mean it never happens. It does happen. And at WDW it would be in the mid-day probably while the owners are in a park, and maybe other guests are trying to take mid-day naps for the kids who now can’t sleep because a dog is barking.

I am a dog owner as well and I would put my dog in a very nice dog hotel for him while I’m going on vacation. Not only for my sake but for other’s sake as well so people can have a relaxing vacation that they spent alot of money for.

So what do you want? A recording of a dog barking? Or a video of one taking a giant crap on the floor? Lol.

Tell ya what. I’m sure people have better things to do at WDW than taking videos or screenshots of dogs pooping. But if I see one while I’m over at Beach Club, I’ll be sure to drop you a line.

I’m not petitioning for trees and lawns and flowerbeds to be banned. I take medication to deal with it.

Generally, no medication is necessary for pet allergies unless one is around them, unlike environmental allergies (which I also have). Which means when my children stay in a room that was not properly cleaned that had pets, they won’t know it until halfway through the night when they wake up having breathing trouble.

We aren’t petitioning banning. My original point was that we shouldn’t blame CMs for not enforcing anything, but the blame is squarely on the shoulders of pet owners who are disrespectful to others. I also pointed out that it isn’t the case for MOST people.

I grew up with a dog I loved. My wife grew up with 4 dogs. My parents and in-laws have dogs. We get it. I’m merely suggesting that there are reasons pet owners need to be respectful to others (as most are).

(And since I’ve only stayed on Disney property once, I can’t speak to barking dogs there…but I’ve been to hotels many times where dogs were barking during the night. More often than I’ve ever heard drunk idiots and slamming doors!)

Oh boy, this is starting to turn into a topic that should be over on the TA forum to be battled out by their “wonderful” members.

Please everyone, let’s not turn into them…PLEASE.