PE Deal - Is it really dolphin and should I switch from POP?

Advice and recommendations please!! I have a 3 night reservation at POP but found this PE deal which is telling me I could stay at the Dolphin for $93/night (plus fees). Total price is about the same. I’d love the ability to walk to EPCOT and HS. Doing evening EMH at EPCOT and two early mornings at HS, including EMM. POP sounds super fun too! Never stayed at either. WWYD?? 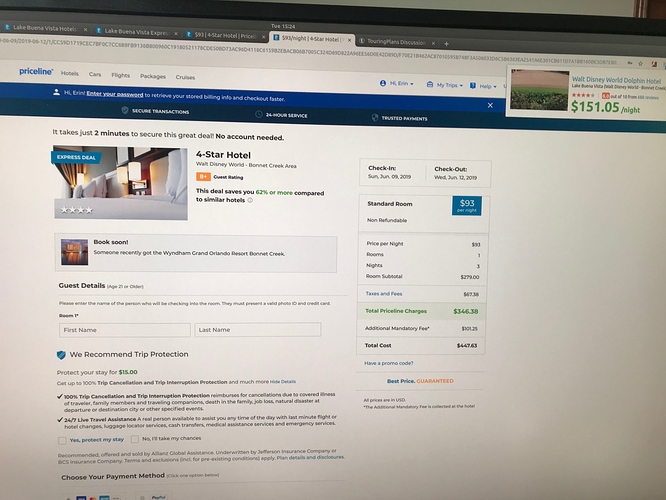 I just looked myself and I think you have a really good shot at that being Dolphin. It says that it has 600 reviews and Dolphin has 688. I think you have found a deal! The Wyndham Grand only has 493 reviews, so I think they’re trying to throw you off with that one!

Your screenshot shows someone who booked it got the Wyndham Grand, so I would be suspicious. What makes you think it is the Dolphin?
Oh I see now where it says it is the Dolphin. Hmmm. I guess take a chance, but don’t cancel your onsite reservation quite yet.

If you go to PL and find this, it says that it’s a 4-star hotel with 600+ reviews. That matches Dolphin, not Wyndham, so I think HC is right.

Gotcha, sorry I missed the box in the corner. I edited above.

Thank you so much for looking into the # of reviews. That makes me pretty sure it’s Dolphin too. Now to decide – eeeek! I don’t know. I think I want to try Pop for this trip. It might just suit us better because it’s just me and DD8 and DS10 this time and we’re spending a lot of time at the parks, but do have some pool time. They like slides but I don’t think they’ll miss not having one. This kills me because I’ve been looking for a deal like this and I can’t believe i’m possibly letting it go!

really!! wow, now I am intrigued again. How are the buses to MK and AK?

Have you priced the Dolphin out on it’s own, like not with Priceline?

Personally, I’m wary of non-refundable. Hubby booked a few of those once on the advice of someone at work (Expedia) and found out later that he’d booked them in the wrong cities from where we’d need them. That money was gone. Tough luck. And then we still had to pay for hotels where we actually stayed.

Anyway, anything can happen, not just mistakes, so I’m wary of non-refundable.

It’s regular Disney bus service, so the same as other resorts basically.

Just in case you did not know, Magic Express does not service Dolphin so you will have to pay for a way to get to/from from the airport. Great location though!

That’s right, good point. I didn’t mind for my trip last fall. I think the time from landing to getting to the IG for an afternoon at Epcot was around 90 minutes, and that included going up to our room since it was ready early.

Update: It really IS Dolphin for $93 per night. After thinking about it for a week, and it was still available, I decided to go for it! I’m excited to be so close to two parks and the grotto pool looks awesome! I have rental car points so I will use them and pay the parking fee at the resort. This will also allow us to leave a little later for MCO on departure day. Excited! 27 days to go! POP will have to wait for another time.

Glad you went for it and it worked out! That is a great price for the Dolphin. I stayed there a few years ago and loved it! It was very quiet, the beds were amazing, and the walk/boat to Epcot and HS is so convenient.

That price for the Dolphin is unbelievable! I hope i can get that next year!

So happy it worked out for you!

These are the kind of deals you stalk PL express deals for – congratulations!!

the beds were amazing, and the walk/boat to Epcot and HS is so convenient.

The beds ARE amazing. And walking to two parks is the best! Have so much fun!!!

That is fabulous! Have an amazing trip!

I am out of the loop I know Dolphin and Swan doesn’t have ME, but do you get FPPs at 60 days?