Apologies if I missed it, but is there any plan to add a park reservation availability tool that may help forecast when a park gets closed to further reservations?

I’m planning for 12/2022 and made initial park reservations, but it would be nice to have a timeframe in mind if changes need to be made.

Hi! Please ask anything & as often as needed!!

park reservation availability tool that may help forecast when a park gets closed to further reservations?

Disney doesn’t say how many reservations they release. They often withhold / don’t release more reservations until closer to the dates. It’s really impossible to predict.

With queues, you can sit there and count the number of people and make predictions. With the Parks Reservations system there’s no way to know if they’ll offer 20K reservations or 60K because they keep it secret.

Knowing that you are going December 2022 does help though…After December 15th the parks become insanely packed until after New Year’s.

That makes sense–I wasn’t sure if data became available for past dates at some point that could be analyzed with some assumptions made for future capacity. Wouldn’t be the most accurate that way anyway.

We’re going the first full week in December, so we should be alright on the crowd front.

My main goal is to have a deadline in mind to ensure I hit MK and EPCOT on extended hours days, especially MK given our 9 and 7 year old girls. Even EPCOT for Frozen. I’ll just have to keep my eye on when the extended hours schedule is released and either hope I guessed right or hope there are reservations available for me to swap days.

Touring Plans checks Park Pass Availability every hour. So they have ALL the historical data on when Park Pass Reservations get sold out. Now we can’t access ALL the data, just the most recent date that availability became unavailable. We can’t see every date when availability comes and goes.

Here is how to access when availability dried up. Go to https://touringplans.com/walt-disney-world/crowd-calendar/date/2021-12-06 and you can change days at the top. Example: 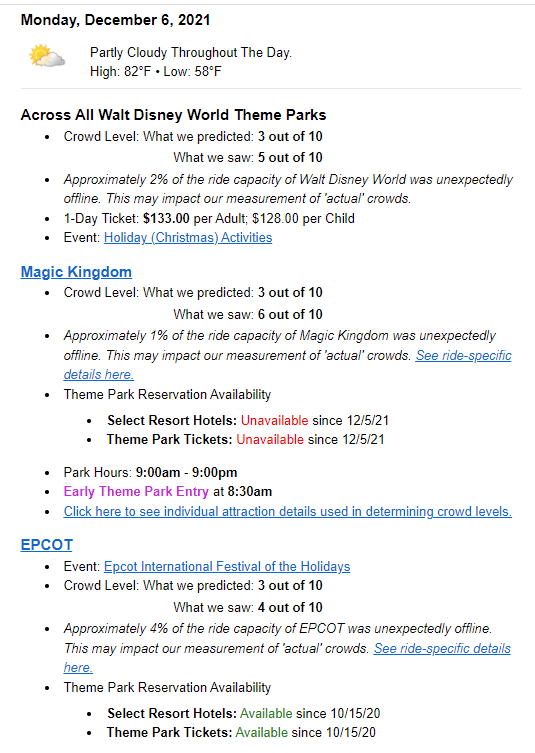 Bottom line, you have nothing to worry about because of you lower crowd travel date. I would plan to have your park days set by mid November to play it safe, and the extended hours schedule is unlikely to change in the few weeks leading up to the date.

Thanks for the tip, super helpful!

That’s a great “work around” that I hadn’t considered to find that info!! Thanks!

I was just getting on to make a post asking about how to make park reservations without knowing park hours yet and saw this post so I’m piggy-backing.

I will be there in June of this year. I don’t think the data for June of 2021 will be helpful because it says on days that had crowd levels of only 1, 2, and 3 that there were no park reservations left. I’m assuming that there were still more severe restrictions on numbers of people in the parks due to COVID. We do have hoppers so I feel slightly less stressed about it, but I’m still lost. I want to take advantage of Extended Evening Hours, if possible, but again, I know in theory I could do that with hoppers regardless of which park I start in. I haven’t been to Epcot since I was about 11 in the '90s, and my husband and kids have never been there. Last time we were at WDW was early June of 2018 so we missed Toy Story Land and all of the new Star Wars stuff in HS so those are definitely a priority. We have 5 day tickets. We have certainly seen in the last 20 months that the best planning can be negated in a second due to changes from Disney, but any advice for what to do for Park Reservations for now?

I made my park reservations for December based on what days Disney is currently assigning extended hours to which park. Its currently only offered at MK and EPCOT, with MK typically on Wednesday and EPCOT typically on Monday–although there is your odd Friday MK day in there as well. Just keep your eye on the schedule as it is updated (https://disneyworld.disney.go.com/guest-services/extended-evening/) just in case things change. You should be alright with your hopper to switch parks to take advantage of the extended hours, but I’m right there with you in trying to ensure that’s the case!

As far as the data from June 2021, I think you are right. I was down in WDW this past June and the capacity restrictions were still in place and crowds were lower than normal for sure.

Agree with you. Also, @Mooria3 ,I would go with the crowd calendar predictions rather than comparing to last year. They seem to look reasonable.

Oh, since you are new here. When replying to a certain person, hit the reply button at the bottom right of that person’s post. That way, said person will get a notification whenever replied to.

Thank you! I appreciate your suggestions.

I’m not that new, but mostly a lurker so I’m sure no one recognizes me.

I probably did need the reminder to hit reply though!

I was actually replying to @keith.salador about replying. But that’s my bad, I wasn’t clear.

Thanks for the tip, again!