Hello! We are a party of 6 headed to WDW this fall. This is my family’s (DH, me, DD4, DD2) second trip, but we are bringing along my in-laws as well (last trip for them was 2000). We are staying at Pop Century. One of the biggest lessons I learned from our last trip was to stop trying to fit EVERYTHING in. Our girls are only going to be this age for a short while, so we are focused on them- hence all the character meals! We did find that TS worked best for our family & worked well as our downtime. The way we make this more affordable is to get the deluxe dining plan for 1 reservation & no dining plan for the other. Then we split the credits which works out great! We will use Minnie vans to get from resort to resort.

Another note- we did midday breaks last year & it really did not work out well for us. My oldest threw a fit about leaving, didn’t want to nap & usually fell asleep right around the time we needed to leave for dinner. So this year we are doing a few full days & some shorter days with evenings at the hotel.

We have 2 days that we made end up flipping based on how crowds are for TSL & if we think we need EMH. I’m including both versions of the plan.

We do have 1 day where I don’t have dinner plans. I’m not sure exactly what we’ll do here- maybe 1900 PF? I also haven’t found a way to squeeze in Akershus which was a hit last time, so I may rework a bit there.

If you have any suggestions on ways to tweak the plan, please let me know! 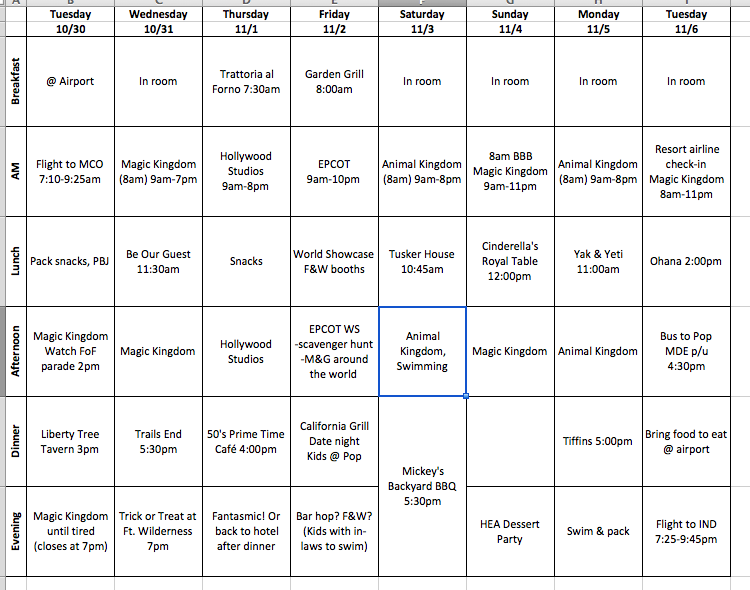 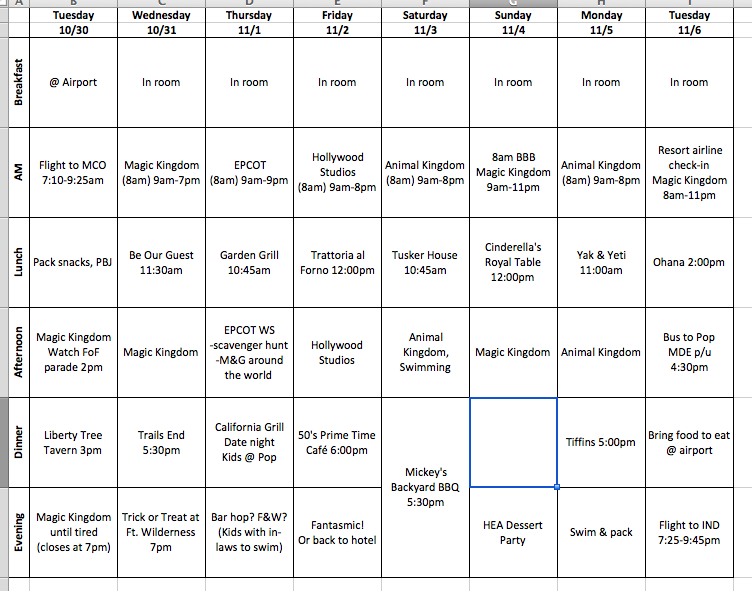 I’m pretty sure Trattoria al Forno only has characters at breakfast. So if that’s why you would be going there lunch in option #2 wouldn’t work.

Also, the day you have no dinner plans on option #2 probably would be fine to do snacks/QS, especially if you move lunch to slightly later. You want to leave room for all your dessert at the dessert party, so no need to eat a huge meal!

The Bon Voyage breakfast reservation go through 12:05pm according to the website

I am fine to snack for dinner but DH doesn’t believe in skipping a meal lol. He would prefer 3 TS per day, so this is a compromise. He eats so much!

Oooh, well then I may investigate that further! So late…most places only go until 10:30 or so!

Ohana is not open at 2:00pm. It serves breakfast and dinner only - no lunch.
You are also going to Fort Wilderness 2x. Allow enough time to get there.
On MNSSHP days, MK closes at 6pm this year year - not 7pm like last year. Last check, TP hadn’t updated for this yet.
FOF parade is usually at 3pm. Keep an eye on this as it will impact your liberty tree ADR.

I will take another look…

Last fall, the FOF parade was at 2:00, probably because of all the short party days. Per Disney’s site, they’re doing that again.

Thanks! I will update the closing time for MK. The parade time is listed as 2pm and was this way last fall? I swear when I check Ohana times that they were open until 3 for breakfast. I’ll move it up until noon. Thanks!

Disney’s scheduled times are always subject to change. The schedule won’t be rock solid until a few weeks out. Always check your times guide the day of.

will you watch the parade from in front of the Liberty tree tavern?

Well ADR day in 6 hours and I’ve destroyed my plans and rebuilt a million times. No clue what I am going to do

The one thing that stood out to me about your schedule was that if you have a later night Trick or Treating at Ft. Wilderness, and then have to factor in transportation back to your resort, you might have trouble getting up and out for the next morning’s early breakfast. You mentioned using Minnie Vans, which we thought were wonderful, but weren’t always available immediately when we tried to use them. So in that case, you might have to pad your timing a bit to allow for extra time, and that could mean getting back to the hotel later at night on Halloween, or needing to start earlier in the AM the next day in order not to miss your 730 am reservation. Otherwise it seems like you have factored in flexibility, in terms of late nights or early mornings, which I think is necessary when you have younger kids. My kids were 6 & 4 during our trip in December, and they were troopers who lasted pretty well from RD to close, but I enjoyed our mornings more when we ate breakfast in the room and could get ready at a slower pace rather than the mornings where we had breakfast reservations.

Yea. You aren’t so far off. I know park hours are subject to change, but here is a link showing the hours for 2017, November.

Another idea for tweaking option 2 - is A. Move Trattoria to breakfast on 11/2 (for characters) and just snack for lunch or do QS at HS that day. B. Also if you are trying to squeeze in Akershus, you could let (BEG) your in-laws to take your daughters on the night you and your husband go to Cali Grill - WIN-WIN - just tell them to take lots of pictures.
C. you do know Liberty Tree no longer has characters

- sad but true; so maybe just do a quick service and you might even be able to squeeze in a ride or two before park closing at 6:00 on the 30th.
D. on the night of HEA Dessert Party - I would eat a light QS because yea - there are lots of desserts at the party

So, the Trattoria is technically a breakfast reservation. They serve breakfast until noon and are closed for lunch

Im not sure that Akershus is going to happen. I just can’t find a good way to fit it in right now.

We were going to LTT for basic American food since we will be very hungry. I didn’t even know it used to have characters!

Yeah, this is one reason I am leaning toward Option #2.

Thanks to those who commented! I appreciate the feedback

I think we are going to do Option#2 unless something with HS is totally throwing things off. It is a little bit of an unknown at this point.

I get you! We are 21 days out and I am rethinking a few meals.