Since I enjoy reading trip reports I have decided to post a summary of our March 2015 trip as we go.

We arrived last night for a trip that will involve four days at Universal staying at the Hard Rock Hotel (in the kids suite) then four nights at the Caribe Royale staying in a two bedroom villa (we have not stayed there before so I am really hoping it is nice). For the size of the room at Caribe Royale I am trying to figure out how it can be so affordable (I paid $205/night using a Black Friday deal). The second half of my trip involves a trip to Dunedin (near Clearwater) to see family, the dolphin swim at Discovery Cove, Seaworld and Aquatica.

Our trip here from NYC was very easy. We even landed early. I learned that the free Wi-Fi on JetBlue works very well. Hertz at the airport is still disorganized. Like last year our car was not on the board for Gold Service but at least they were able to give us our minivan quickly. Last year we had to go to the other side of the airport.

We checked in without incident at the HRH. I am a Hard Rewards member. The person at the front desk checked for upgrades but none were available. Our GardenGrocer.com order was waiting for us. The bellman took our bags to the room with us as soon as we picked up our Express Passes and tickets so there was no waiting. I had thought that all rooms had been recently upgraded (so did the bellman who was telling us about it). Our kids suite has not been upgraded but is perfectly nice.

As is normal for my family we did not sleep particularly well the first night for a variety of reasons but it was not disastrous. Since my DH only tolerates the parks, we now let him sleep in while I take the DDs to the parks for early entry.

We made it over to IOA right at 8:00 a.m. There seemed to be vastly more people in the parks for early entry than has been our experience for our prior four spring break trips. I am wondering if Cabana Bay is having a big effect.

We picked up our pre-ordered PhotoConnect card and headed to Hogsmeade. When we got there about 8:15 a.m. the line for FJoHP was already 45 minutes. We decided that we should try to take the Hogwarts Express to US. They opened the line about 8:25 a.m. We were about the 10th ones in line. We walked through the long queue and could see the train from the platform. They started loading the train about 8:50 a.m.

We thought the ride was really fun. When we got to Kings Cross we went straight to Diagon Alley. This was our first visit and we are loving it.

The line for Gringotts was about 10 minutes so we decided to get in line. In the short time we spent putting our bag in the locker the wait grew to 20 minutes. The line was moving very quickly (almost too fast). We were on the ride before we knew it. The ride paused for about a minute before we were released. We were about 30 seconds into the ride (right on the first downhill) when the ride came to a sudden stop. We were pitched forward about 45 degrees. Despite the several ride announcements stating that the ride would resume “immediately” it did not. We were stuck there for about 10 minutes. My DD8 who scares easily was very uncomfortable about the situation. The ride resumed but seemed to be missing some effects. It stopped again about minute later. This time we were only stopped for a minute or two. The ride resumed without incident. At the end we were given an Express Pass that is good though Monday for one ride. It includes FJoHP and Gringotts on the permitted list. We have not used them yet so I will need to figure out how these work since those rides do not have Express Pass lines.

Even though it was not quite 10:00 a.m. We decided it was time for Butterbeer ice cream. There was no line and the ice cream was fantastic. We also saw the dragon “roar” for the first time while eating our cones. That was amazing!!!

We then spent some time looking at the shops. I bought an interactive wand for the DDs. Once we got the hang of it it was quite fun. The first spell was so hard that even the team member could not make it work.

DH joined us. We spent some more time in the shops. We then went over to ride Simpsons and MIB. By this point it was 11:30 a.m. so we decided to eat lunch at Simpsons. The lines were not very long but the service was very slow. i had the chicken and waffles, DDs had pizza and DH got chicken tacos from the truck outside. Everyone was happy.

We went back to Kings Cross to take the Hogwarts Express back to Hogsmeade. It was basically a walk-on. It is fun to see the different effects.

DD11 and I rode Dragon Challenge, Spider-Man and the Hulk while DD8 and DH rode all of the Seuss rides. The expresses passes were a huge help for this since we did that in about an hour.

We then met up and rode Blutos Barges three times. DH and I wore ponchos while the DDs got soaked to the skin. We love this ride. The expressions on fellow passengers’ faces are priceless. It was then time (about 3:00 p.m.) to head back the HRH pool.

DH and I relaxed while drinking margaritas in the pool while the DDs swam and went down the slide over and over again. DD8 started participating in the DJ’s contests and had a great time.

Eventually we got hungry and ate at the pool restaurant. We all enjoyed our meals. DH took the DDs to Emack and Bolios for ice cream while I changed.

With a bit of rushing we made it back to US for the Mardi Gras parade. We found a good spot (right in front of Terminator). The DDs had tons of fun catching beads. At the end of the parade we headed back to the hotel.

We are looking forward to more rides tomorrow. We noticed that HRRR was closed for most of the day. I am hoping that we can ride it tomorrow.

If my phone cooperates will try to post some pictures too.

Thanks for taking the time to share this! Sounds like a wonderful trip so far! Looking forward to hearing more! 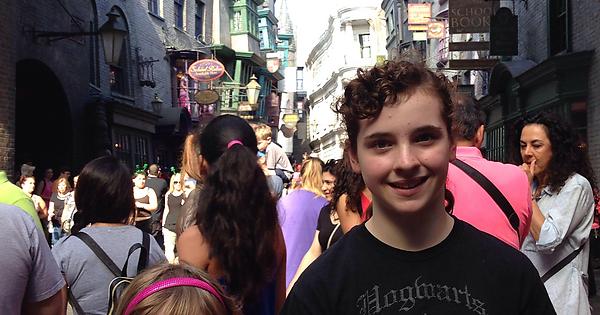 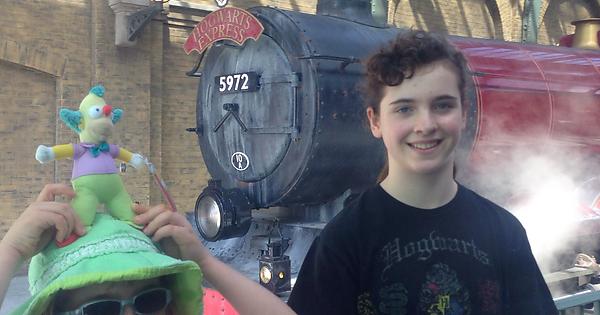 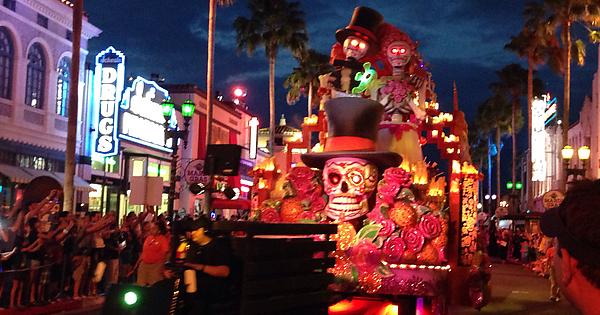 Thanks for sharing! Enjoying it!

Sounds like a great time so far. Looking forward to the next instalment.

Thanks for sharing! There are a lot more WDW trip reports than UOR ones, so it is great to see this.

Thanks Tanavin that was really interesting. Appreciate you taking the time to post

Nice recap! I’m glad I’m not the only who thinks there’s no wrong time for butter beer ice cream. That cone is huge!

Great report. Thanks for sharing. We had same experience on gringotts when the ride stopped at that forward angle. I was a little nervous too! They let us get straight back on again when we got off so all was well in the end. Enjoy the rest of your trip.

I would love to hear your opinion on the photo package. Thanks!

Thank you for sharing that was a great rate on the room! Can’t wait to hear about more