According to Carly Wisel (who has seen a list of available rides upon reopening): 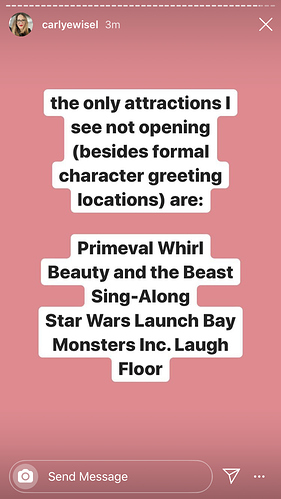 Here’s the link to Disney’s updated page that lists all available attractions: https://disneyworld.disney.go.com/experience-updates/parks/

Scroll down to the bottom and select the park to view the attractions.

The other attractions that will not be available: Frozen Sing a long
Indiana Jones stunt show
Finding Nemo The Musical

I am a little surprised by this one…but maybe it is more for the CMs than the guests. Being open air, and with plenty of seating, socially distancing guests seems very easy.

We’re big on the shows. They keep confirming that our cancellation was the right choice.

My family would not be sad if these never reopened!

The Festival of the Lion King is open, so I don’t understand why the stunt show isn’t open either.

Happy to see Droid Depot on the list to be open. Now the challenging part, how and when does one go about signing up for this.

We had 2 reservations that obviously got cleared with the rest of ADR’s.

In a couple of years time your boys will love Indy.

It’s actually one of my favourite attractions in any of the parks. Definitely in my top 5, maybe top 3.

I was thinking that the special character cavalcades would be an opportunity for some of the rarer characters, but it doesn’t quite sound like it. I wish character greets weren’t always so heavy on the Princesses!

MK: Character Cavalcades throughout the day, with Guest-favorite Disney friends appearing along the parade route—which will include:

AK: Character Cruises throughout the day, with Guest-favorite Disney friends appearing in boats around Discovery River—including the following:

True, true. We aren’t currently show people besides FOTLK. I haven’t personally seen Indy in over 10 years. But my husband still sheds tears over the loss of Lights, Motors, Action!

This is one thing that I REALLY hope will change before fall.

I am very afraid for the sacred spaces. With pals floating down river I’m afraid that porch will become a hangout spot.

They do bring guests up in the stage to interact with the CMs for the entire show…maybe that has something to do with it?

So… everyone just forgot about ratatouille huh?

They could axe that part.

The performers are equity, and. I suspect their rules prevent them from working that close.

Also I think there’s a problem getting people OUT of the theatres. I mean, look how much notice people take of CMs asking everyone to move “right the way across” at the best of times. How are they going to prevent everyone rushing for the exit?

Ratatouille still has several weeks work left before opening. And staff to train. It was due to be opening about now. At best, push that back three months.

There’s a special “just for grownups” version being offered at select resort rooms, depending upon occupancy.