Hi all! Here is the first installment of my trip report from our most recent visit to the Mouse!

Some background: I joined TouringPlans back in March 2010. I’m a Type A firstborn always wanting to be as prepared as possible for anything I do, but especially trips I take so that I can get the most out of every experience. In looking for some guidance around how to get around the parks most efficiently with DD then 5 and DS then 2.5, along with DH then 40. I fell in love with the product and couldn’t wait to test it out. On that particular trip we followed several of the canned plans and enjoyed much success. When it was time to return in 2014 I got back onto the site. I discovered the app and found Chat and now I’m around these parts more often than not

I tell folks all the time: in what is now 5 trips we’ve made, totaling 35 days, the only day that was not absolutely stellar was the one day we did not follow our plan. That cannot be a coincidence!

This trip was our longest since 2010. DH now 46, Me now 42, DD now 13, and DS now 9 were spending 8 nights on our Disney vacation. Now, we always talk about trying out other resorts, but our hearts belong to Animal Kingdom Lodge, so this is where we opted to stay this time too. We had a 30% off PIN that we were able to apply to this stay, making it an option we could afford. Since we’ve stayed here a few times now and are well aware that the savanna view is not an absolute must, we booked a standard view room with 1 queen and a set of bunk beds. We hoped to get one of those sneaky partial savanna view rooms, but realized we could get a parking lot view, and we were good with that.

We are from Manchester, NH and we live literally 2 miles from MHT, Manchester-Boston Regional Airport. However, our dates encompassed NH school vacation week and that coupled with a market that has been unreasonably high for some time now made it impossible for us to get affordable fares from this super-local airport. For some perspective, I was never able to find anything less than $250pp ONE WAY, and I checked Southwest on a daily basis starting as soon as our dates were released. Boston, one hour away, was not much better. Even flexing our dates a bit didn’t help. So we opted to drive a bit further and fly out of PVD T.F. Green Airport in Providence, RI. Friends of mine, also frequent Disney visitors and also from the 603, have been doing this for a few years now, so I was able to get enough information from her to make me comfortable with this option.

Our flight was scheduled to leave PVD at 11:35a.m. and arrive at MCO at 2:30pm. There were earlier flights that were about the same cost, but given that we wanted to allow for 2 hours of travel and arrive 2 hours ahead of our flight departure since we were unfamiliar with the airport, this timing was reasonable. We left home at 7:30 that morning, which is similar to our normal weekday departure time and allowed us a full night’s rest and a no-stress morning getting ready, packing those last minute items, and buttoning up the house (and seeing to our cats!) before we left. 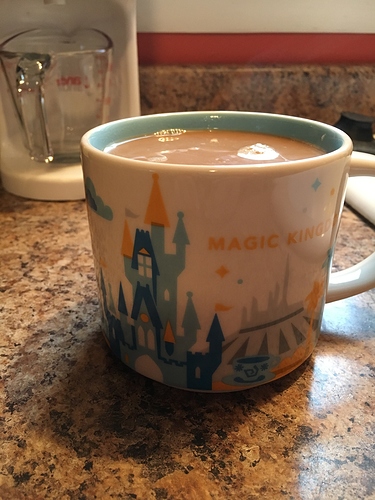 The ride from MHT to PVD was easy that Saturday morning and we encountered almost no traffic at all, except for a very small but just as we got into Providence. On the way we streamed AppleMusic’s Disney Radio Station, which really got us in the spirit! This particular channel plays all genres of Disney music - from parks music to movies and shows, both current and classic. It was a perfect station and we listened to it each morning of our trip as well. Our drive took us all of 90 minutes, 30 minutes less than we had alloted for ourselves which was nice. Again, no stress. We parked in Lot E for long term parking. A fellow liner had alerted me to a coupon that could be had on the PVD website that discounted the cost of a week’s parking from $75 to $61

Not bad at all. The coupon can be found here, in case you ever find yourself using this airport: http://www.parkpvdairport.com/coupon-special-lot-e/

The shuttle to the terminal was waiting for us when we parked and whisked us off to the entrance in no time at all. The airport is, as I had been told, very similar in size to MHT. We checked our bags and got through TSA screening with no wait at all. The airport was very quiet at that hour, just about 0930, and many of the stores and kiosks were not yet open. We did the usual things you do to use up time in the airport - charged our devices, used the facilities, checked our plans, grabbed some beverages in one of the shops. We were excited when our time to board arrived! They boarded business travelers and started family boarding, and all of a sudden everything came to a halt. We were notified that there had been some type of medical emergency inside the jetway and that our continued boarding would be delayed 30 minutes. We later heard that “everything worked out okay”, whatever that means, and we hope that the passenger is well now. Once they resumed boarding, they hustled us along. No frills, no extras, basically told us to get our butts in some seats so we could get a move on! We had lost our place in line for takeoff and had to be worked back in which took a little time. We were finally in the air right around 12:30, almost an hour behind schedule. As soon as we were able, I ordered my first beverage of the vacation, vodka and cranberry: 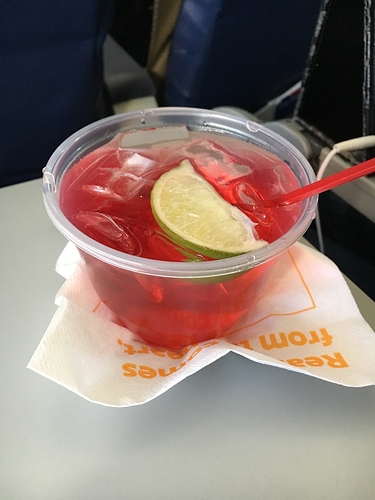 The flight was a good one with not too much turbulance and we were wheels down at 3:08pm. 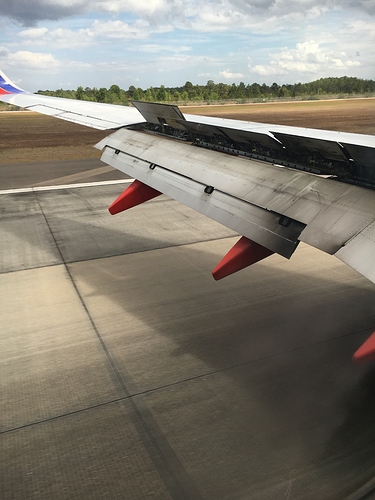 WDW tells you to plan on at least 2 hours from wheels down to arrival at resort and on this trip 2 hours was our experience. We had “yellow tagged” our luggage so it was going straight to AKL and we could too

We made a quick pit stop and then boarded the first ride of the trip at 3:35: 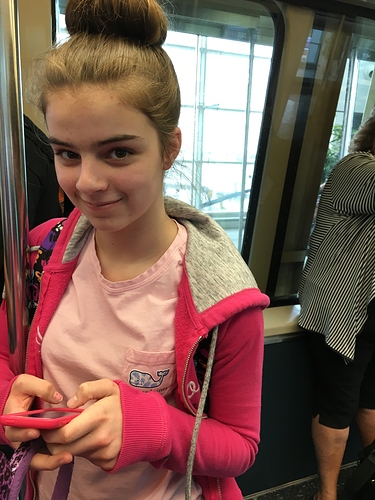 We made our way to DME. We had never arrived on a Saturday before, so this was our first time experiencing any congestion there. Between large numbers of passengers, and a goodly number of them not prepared properly, it took us a bit to get on a bus. But we were finally bum in seat at 3:58pm 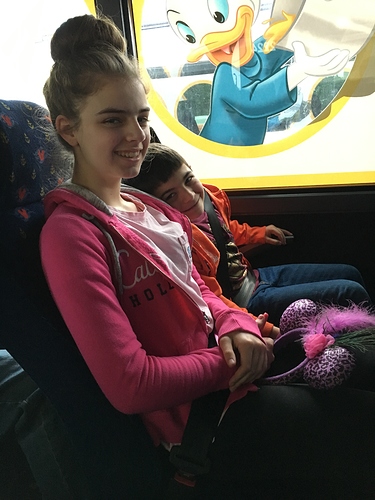 There was some pretty heavy traffic from MCO to WDW, and AKL was the third stop in the trip from the airport, with stops first at AoA and CBR. But finally, at 5:04pm, we were home <3 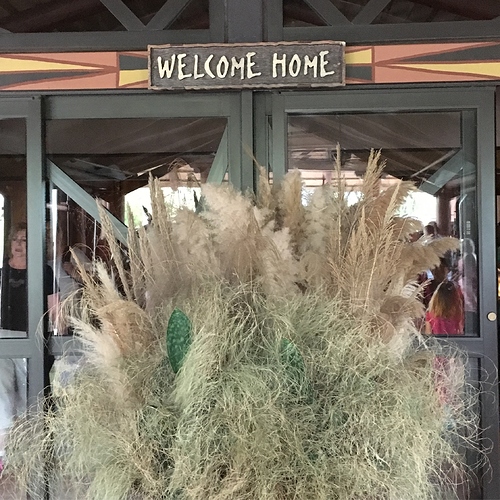 Up next: “when you think your room request fax is a fail” and “make sure you pack a brush in your carry-on!”

Looking forward to the next chapter…

Looking forward to future installments! I enjoy your reports! I, too, am a long time OB nurse turned nursing instructor!

Where do you teach? That’s a little job option I have tucked back in my brain for the future…

Oh, fun! I am a Type A first-born also, and definitely want to experience as much as possible! I am planning an extended family trip for late Nov-early Dec this year and am so pleased to have found this site! Looking forward to reading more!

We live in OH, and I teach at a local community college in an LPN program! I miss my patients and teaching childbirth classes, but I LOVE my schedule!

Lovely, detailed trip report…looking forward for the rest!
Thanks for sharing

Great report, looking forward to mine. Vodka and cranberry, make mine a double, please.

Yay! A trip report! We’re there any lines at the airport? I am going to be cutting it very close in October leaving work at 2:30 and having to be at the gate by 5:00.

Your welcome home picture brought pixie dust to my eyes!

I’m an “only born”. I was a serious “Type A” for may years, but somewhere along the way I grew out of it and am now a much more relaxed “Type B”. Kind of like I’m not allergic to cats anymore…

No lines at all at 0930. Can’t say about later. It did get quite a bit more busy later on, closer to boarding time. 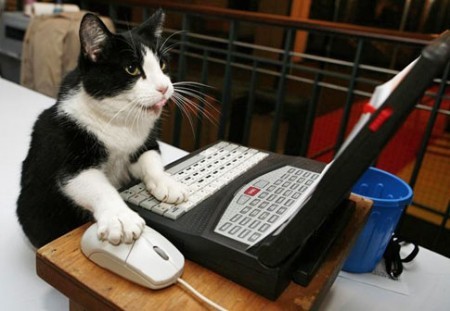 Hello friend! I’m interested to hear all about your trip!

Please - sign up for the website and make sure to register to receive the newsletter also, too!

Love the report so far! I too am a vodka and cranberry fan.

So exciting!!
We fly PVD regularly (we live in RI!) and love it. They’ve made some changes in recent years but there is never a line at security and the TSA there are always friendly. I hope our little airport stays open forever.
Coincidentally, on 4/22, we went to Notingham, NH, passing the Manchester exit along the way. Two ships…
Keep it coming!