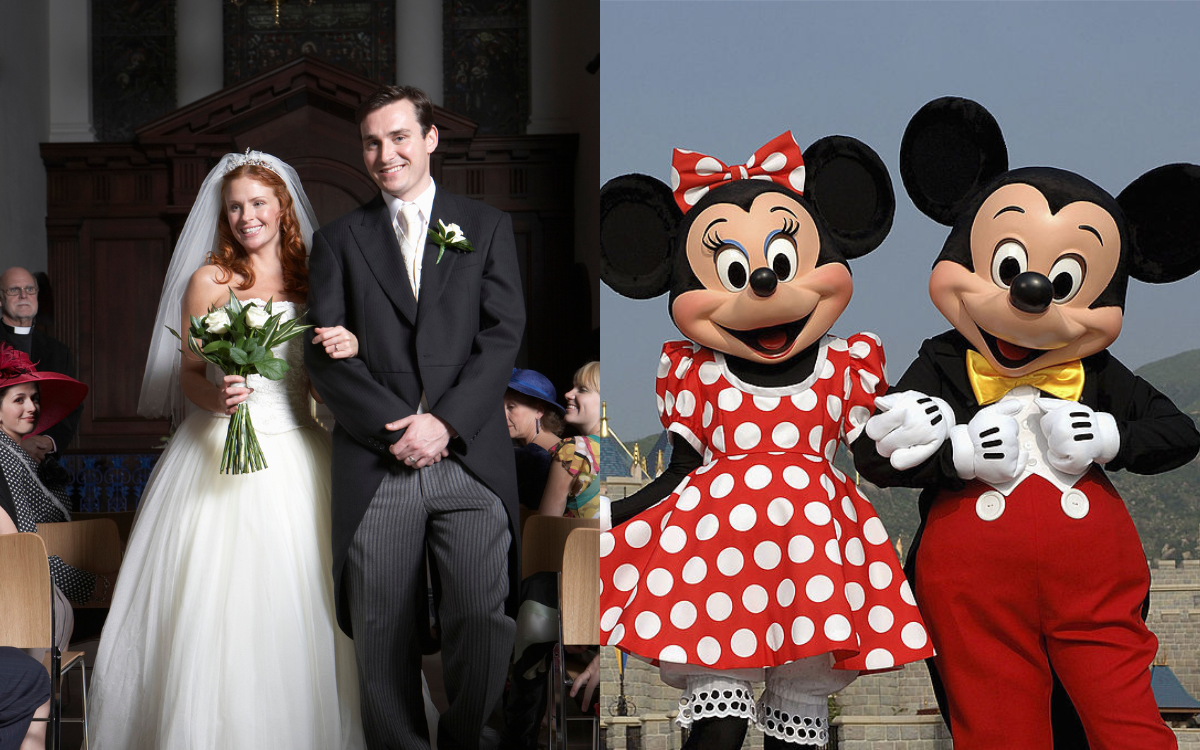 The bride justified the choice explaining they are "huge Disney fans" but many of her guests were left unhappy.

I cannot imagine going to a destination wedding and not being fed at the reception. Weddings should not be BYOF.

Right? Like my sister had a mid-late afternoon reception and only served desserts but 1) it was clearly stated on the invitations that only desserts were served so people knew to have lunch beforehand and 2) that was at a church in Alabama and it was a small wedding with only family and close friends. Not a freaking destination wedding at Disney! Also I might have still judged her a little in secret

not really but it’s certainly not what I would do if I were to ever get married (hah!

FWIW, I don’t think the wedding was actually at Disney. Just that Mickey & Mini appeared in lieu of food.

I was somewhat amazed that 30 minutes of Mickey & Minnie would be that much. Looks like they paid $2750 per 30 minute session for Mickey/Minnie and booked 2 of those sessions instead of paying for food.

I don’t think “slamming” them is appropriate (people should invite Mickey if they want), but I think that shouldn’t be a choice they’re making. It’s like “we can either have a house or beds …” and you choose beds. Where are you going to put them?

It’s a package deal. You either have food at your wedding or you don’t have a wedding. If you need to give something up, it would have to be external to the wedding or something non-essential.

Ok not providing food and directing me to vending machines is an even bigger insult. Also wtf does she think “food is available at the venue” means bc when I read that I still don’t think I’m going to have to take myself out to eat during her reception.

Has it been? I can’t remember. I know I discussed it but was that here or elsewhere?

Listen, I’m not even from the south and I know that if you invite people to gather socially you give them some kind of refreshment, however modest that might be.

They deserved to be shamed, IMO, especially for how they handled it in directing people to other food and vending

I haven’t seen it discussed here.

I don’t think “slamming” them is appropriate

I know, Jeff. You’re all too kind. But honey, it was appropriate.

Edited: specifically it was appropriate because they asked, AITA? (and they were)

Agreed the invitation should have clearly spelled out:
“Owing to mice on the premises, there will be no refreshments or meal provided at the reception.”

You always have the best way of wording things

Probably fake. Here’s the original reddit thread - was deleted because of:

This post violates Rule 8: Posts should be truthful and reflect recent conflicts you’ve had that need arbitration. That means no shitposts, parodies, or satires.

Of course, ITM picked it up a few days ago. They search through social media and post whatever bizarre stories they find. Sad that Newsweek passed it on but good for comedic value.

These AITA posts are asking for it. And sometimes I suspect they are fabricated.

That said, the part that bugs me is the aunt posting about it on Facebook a month later (publicly?!) complaining? I would never see that in my family, no matter how dumb someone was, and I have some pretty blunt extended family members.

That is brilliant! LOL.

I totally agree with you. Directing guests to VENDING MACHINES??? Rude! I would think that food available at the venue means food served at the venue where the wedding will be held. Honeymoon at Disney. Schedule a capture the magic photo session while there. Don’t spend your catering budget on a character appearance.

Is there any other social construct that has caused more trauma than weddings? Every part of two people getting married seems designed to cause maximum damage to as many people as possible.

And to think my people were desperate to be allowed to join in. Which was itself another example of how miserable the whole process is.

If I have learned one thing from my own wedding, the vows are for the couple, the rest of the ceremony and reception is for everyone else.

If this story is true, these people were rude to their guests.

I don’t think “slamming” them is appropriate

We celebrate uniqueness, and then publicly shame and ridicule those who make different choices than we would because it doesn’t fit the normal social constructs we have in our heads. If anything I applaud them for knowing what would be memorable for them and not bowing to societal pressure.

I was going to say I’m sorry that their special day turned into Disney fodder, but they were the ones who gave breath to the aunts complaints by posting about it.

I’m clearly in a mood today so I’m going to go focus on non internet things and talk to my fake plant who never judges anyone.

Also, this made me laugh.

Agreed the invitation should have clearly spelled out:
“Owing to mice on the premises, there will be no refreshments or meal provided at the reception.”