I would appreciate any help you all are willing to share.

Some of my friends are going to Universal Orlando on Jan 21…first time in years for them and I see there are very short park hours so I want to help them plan well. (I am staying at Disney…lol).

They will have early entry and can not afford EP. They have a 1 day 2 park PTP ticket. I see only 3 things are open during EE that day (Despicable Me, Gringott’s and Olivander’s). Is there a certain order they should do these in during that hour? Can they get all 3 done in that hour? Do they really need to be at the park gate 75 minutes early as is recommended by TP?

Also, they LOVE HP! I am reading through the threads quickly and am trying to figure out when to recommend they try for riding Hagrids? Looks like a gamble any time they try? Any tips? I see it won’t let me add Hagrid’s if I try to make a personalized TP.

I have printed out the 1 day 2 park generic TP for them and wonder if you would recommend any change to that?

I noticed Jurassic Park River Adventure is closed too so I will tell them that.

You can definitely add Hagrid to a personalised plan, I did it as soon as it opened for my August plans. But the times won’t be reliable. Early afternoon is probably the best time for them to try for it.

We don’t ride Despicable Me or do Ollivanders, but the wait for Gringotts should be very short during that hour. I think we waited 5-10 mins in August.

Is there a certain order they should do these in during that hour?

Yes! Skip Despicable Me entirely. They’ve removed the 3-D element last year and it’s just not the same. If you insist on doing it then get to the park about 30+ minutes before your EE and do it first.

Then I would head to Olivander’s. I recommend this because it’s a show in a small room. By doing it early you’ll get an almost “private” show and maybe a chance to get picked to be in it. (They usually pick small kids, but if there aren’t any they pick you!) Then go to Gringott’s. You can truly do this in either way as long as you head straight to WWOHP before the regular park guests head back that way.

Can they get all 3 done in that hour? Do they really need to be at the park gate 75 minutes early as is recommended by TP?

I’d get to the Universal parking garage at least 45+ minutes early. It’s a long walk from the garage, through security and then CityWalk to the main gate. By the time you get there it’ll be about 30 minutes before park open.

As mentioned - you’ll have plenty of time to do all three in this hour.

I am reading through the threads quickly and am trying to figure out when to recommend they try for riding Hagrids?

IMHO - Be there right at the park opening. Leave Hogsmeade about 10 minutes early (another reason to skip DM on the way in) and wait at that queue. (Ask a TM if it’s scheduled to start on time. I’d ask multiple since some TMs are just “guessing”) It’s the only reliable way to get on Hagrid. It seems to run “ok” for a bit in the morning, break down and then run smoothly for a few hours before being down a bit late day and running until they decided to stop the ride for the day. It still tends to open late and close early - so, again, ask as many ppl as you can if the ride is opening on time, even if you are already in the queue. They’ll sometimes let you queue knowing it’s not opening until 10:30am

I noticed Jurassic Park River Adventure is closed too

Yes. They are building a new Jurassic Park coaster and access to that area for construction. It will not replace the JPRA. It’s a new additional ride.

Please ask anything and often!

Thank you so much for your quick response - both of you! I really appreciate it.

@missoverexcited for some reason last night when I tried to add Hagrid’s, it wasn’t on the list. I had my daughter read through the list too incase I was just missing it but she didn’t see it either. Maybe a glitch? I will check again tonight.

@darkmite2 Thank you for those recommendations and details! So helpful! Would you say they can get all the “big rides/activities” done still with this shorter park hours and no EP? Regular park hours at USF are 9 - 6 that day and at IOA is 9 - 7 with overall crowd estimates of 6/10. Is there anything you would say they should for sure skip other than Despicable Me? They are an adult and 2 teen boys that love coasters and HP.

I really enjoyed Ollivanders and Gringotts. Despicable Me was ok but I mostly did it b/c I had my child with me. It had an option to not be tossed around (stationary seating) and we used it. I was surprised at how much the people in the other seats were moved around. In Gringotts you can enjoy the queue b/c it goes through the bank and there are also other fun things in the line. Ollivanders was really fun. I got there early and waited only about 15 min to get in. The show is very short and then you go into the store, but you can leave if you don’t want to purchase.

I let me TP subscription for USF/IOA expire in November as I don’t plan on going back until Epic Universe is ready in 2023. (I might pop over for a day if I’m at WDW, but not a 3 - 5 day exclusive USF trip for a while)

So… I’m not sure why / if Hagrid is in the TP. Surprised that it isn’t. (I could’ve sworn it was an option)

Would you say they can get all the “big rides/activities” done still with this shorter park hours and no EP?

Maybe…IMHO there are 6 “big rides” at USF. There are still another 6 other good rides there. At IOA there are at least 8 “big rides” and 4 other good rides. This doesn’t include any shows or repeat rides. (I didn’t include HE as a “ride” as I imagine that will be your mode of transport between parks, but it is an incredible ride. It is a different experience each way, so if you can allow time for at least two trips on it.)

Like we say… Have a plan and you’ll have a better chance than about 90% of ppl just wandering around asking, “What do you want to do now?”

Maybe ALL of Seuss Landing. I do love the Cat in the Hat dark ride, but it is for small children.

If I’m only doing one “water” ride it will always be DDR:RSF. Be warned! ALL of the water rides at Universal are programmed to soak you. I’ve been to theme parks all over the world and never have been as wet as their water rides.

Flight of the Hippogriff - It’s an old kiddie ride they slapped some Harry Potter stuff on. It’s a 1:06 minute ride that you can wait an hour to get on just because it has Harry Potter slapped on it

Despicable Me - lame without the 3-D

Shrek 4-D - They play the same movie you can watch it on Netflix anytime add basic F/X.

Jimmy Fallon and/or Fast & Furious - I might ride one of these, but not both. (FYI - F&F does have half dressed “sexy” party ladies & violence if that is an issue. Of the two I like F&F, but I’m in a minority because I actually like those dumb movies)

All of the Woody Woodpecker Kids Zone - except for maybe E.T. (I love it, but my DD17 doesn’t know anything about who ET is and thought it was a weird ride. It’s like Peter Pan, but gets real “trippy” at the end with a bunch of crazy alien friends)

do they get on the HW Express before 9 am or do you mean that is where they should line up 10 minutes before 9 am?

I always forget which side Hagrid’s is on since I haven’t ridden yet. I tried in June, but got denied. Since you’ll be over at USF head to the HE about 10 minutes before the parks officially open. You can’t board HE yet, but you’ll be ready to go. You won’t be at the head of the RD crowd at Hagrid’s but you’ll be in the earliest groups. Plus, this will give you a reason to ride the HE back over to USF and see the “other” show on the train.

I only use Personalized Plans. For Universal it’s only $7.95 and well worth it. Do you really need a TP for Universal… probably not. For me it’s more like an organized checklist with access to up to the minute queue wait info on the TP Lines App that you get included. (I promise I don’t work for TP!)

If you do buy a subscription know that there is no way to make a single plan that uses both parks. You have to make a USF plan that goes up to when you leave that park on HE - putting in a break for the duration you are at IOA then adding in the rest after the break. And making a separate IOA plan for the times you are there and etc… (If that’s confusing let me know)

(and if the TMs say it should open right away), do they get on the HW Express before 9 am

About this. There have been multiple instances of TMs saying that Hagrid is on a delayed opening, when, in fact, it opens almost immediately after park opening. I personally think they are doing it to try and disperse crowds, so I would not trust it. If Hagrid is a priority, I would go there right at park open to see for yourself (theirselves?) if it’s actually closed.

Also, attempting to get to IOA early by taking the Hogwarts Express will backfire. The Express will not open until IOA opens, putting them behind the rope drop crowd at IOA. if they want to try Hagrid, they are better off being in the line at the front of the park before park opening.

Also, unless your friends plan on buying wands and doing spells, I would say you could skip Ollivanders. it is neat, but if you’re dealing with only one day to try and get as much done as possible, I would say it is skippable.

I would say you could skip Ollivanders. it is neat, but if you’re dealing with only one day to try and get as much done as possible, I would say it is skippable.

It breaks my heart to admit it, but it probably is. If they are BIG HP fans, I’d make time!

If they are just there for one day, they can either do EE or ride Hagrid’s at RD, but not both because they would need to be at the gates of IOA by 8am. That’s why I suggested riding in the early afternoon, wait times tend to drop around 1-2. Hogwarts Express doesn’t start running until 9am and would put them way behind the crowds.

I’d probably do a personalised plan for them, but it’s almost impossible since you have no idea how long Hagrid’s is going to take (which might be why it’s not on the list, if it has gone). 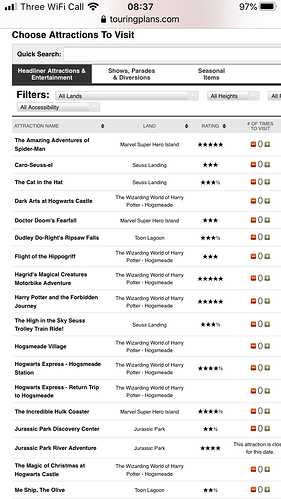 And appears in my plan 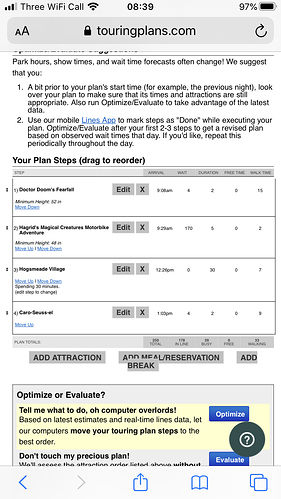 I completely agree! I enjoyed Ollivander’s, but after a wand chose me as part of the show, I don’t need to go again. And if I had limited time, I would be fine cutting it.

after a wand chose me as part of the show, I don’t need to go again.