Hi. We are going to be in WDW for New Years and I am trying to decide what to do on Monday, Dec 30th and Tuesday, Dec 31st. I know MK does the special Fireworks Monday night as well as Tuesday, and then Epcot also has a celebration of sorts on Tuesday. For those who have been over New Years, what did you choose to do, and would you do it again? My kids will be 16 & 18, so no issues with late nights.
Do either MK or EP reach capacity on New Years Eve? Do we need to be in the parks early in the day, or would an afternoon arrival be okay? We have been to WDW many times, but never between Christmas and New Years. Also, were there any After Hours or EMM scheduled between 12/26 and 1/1? Thanks for your help!

I went for NYE in 1999 and 2000, so I’m not sure how relevant my experience is, but MK did reach capacity, and it reached it early. Plus the roads were a nightmare, I remember it took hours to get from the KOA campground to the park. Like, it was bad enough that half of us got out of the car, walked to (what was then) MGM Studios, got our hands stamped, walked back to the car, and traded with the driver so they could go do the same.

We were there last year. On the 30th we did the desert party for the early fireworks at MK which was fantastic. The park was really crowded but we had plenty of room in the garden and the fireworks were amazing! After the fireworks we did a few rides and then went back to our resort.

I don’t think MK reached capacity on the 30th but I think it had some phased closing for a while on the 31st. We were staying at WL on the 30th (moved to BC on the 31st) and when we went past MK on the bus in the morning of the 31st, the lineup of cars going into MK went for miles.

We booked a last minute Star Wars desert party at HS for the 31st which was really fun (we were originally planning on going to Epcot). We enjoyed having the reserved viewing for those fireworks too and it was the only night the SW fireworks were shown while we were there. They did the New Years countdown followed by the fireworks. I think we got to HS around 9:30pm and it was pretty busy but we had no trouble getting in. We watched jingle bell jingle bam from down the street before we went to the desert party. It wasn’t too bad getting out after the fireworks because even though the park was jam packed, it’s a straight line from the fireworks to the exit, so the crowd moves fairly well.

We watched some of the earlier Epcot fireworks from the bridge on the way to the International Gateway because we were staying at BC and heard them start from our room. We didn’t go into Epcot so I don’t know how busy it was, but I’m pretty sure there were no closures.

If it’s in your budget, I would definitely recommend a dessert party for either the early or midnight fireworks in MK on either the 30th or 31st. It’s so nice not having to worry about finding a spot in the huge crowds. If you have a desert party or other dining reservation booked, you will be let into the parks even if they start phased closures. 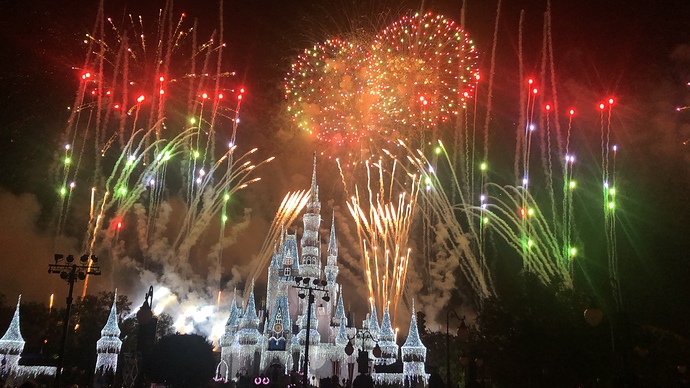 We went over New Years several years ago. We choose to attended the fireworks on the 30th and it wasn’t bad at all. We easily found spots in the hub. We knew the 31st would be bad so we relaxed at the Poly and went to DS. MK started phases closings by late morning and the parking gate was backed up for what seemed like miles. We watched the fireworks that night from the Poly (we were staying CL and it was pretty fabulous.). It was a great trip overall but we definitely went knowing it would be busy.

Your biggest problem will be traffic. It will be at a standstill all the way back to the interstate from around noon. You really want to be using the Disney buses, as they will be able to use back roads and get through even if nothing else is moving.

We chose not to do the parks at all NYE. I resort hopped from Bay Lake to WL, and rode the boat right around Bay Lake before settling with coffee and a cupcake upstairs in the lobby. DH and the boys went shopping off site.

We were meant to meet back at Bay Lake around 3pm and go to DS for an early dinner before going back to TOTWL. The reality was, DH couldn’t get back to Bay Lake. So he parked at DS, we had dinner without a drink, had one drink at Jock’s Hangar Bar, walked around a while and then a CM told us how to get back via FW; on scanning our band as we joined the main road to the MK parking lot, a CM directed us along the grass verge past the traffic jam.

MK will almost certainly reach a phased closure, but it will come and go through the day. And if you’re staying onsite you’ll still be allowed in. The question is, will you want to.

Thank you! We will definitely spring for the dessert party at MK, we usually do the garden plaza party during our spring break trips. Do you remember if there were 2 dessert parties at MK on the 30th- one for the early fireworks and one for the late? Think we will plan MK the 30th, and then go to Epcot on the 31st. We will probably stay at the Swan or Dolphin so we can walk/boat back after the Epcot fireworks. I don’t want to deal with transportation if I can avoid it. Love your picture, looks amazing! Thanks again.

Thanks! Hopefully the crowds will be manageable, we have survived both WDW and Disneyland in packed crowds.

You can handle it. You’re an expert.

Yeah I am not too worried. I’ll also throw money at things to make it more manageable. You know we like our extras.

Believe me I understand. I have a hard time saying no to extras even though I know we could still have a great time without them. But they tend to be just so fun.

Have you done the Club Level extra FPP? Life would sure be easier with 3 extra FPP a day.

Last we did MK on the 30th. It was awesome. MK was open til 2 am. We were going to do Epcot on the 31st. That was disaster. Since we stayed so late on the 30th we were going to EP later. We left POP at 11am for our 1pm ADR. However, The 15 minute bus ride took 2.5 hours. Security took and 1 and the it was wall to wall, shoulder to shoulder people that I took another hour to get to Tutto. They went way above by honoring our reservation even though we were almost 3 hours late. We missed all our FP we had made too. So we left for the hotel at 5. This year we are taking the 31st our non park rest day. We love being there for Christmas through New Years but you have to be prepared for the crowds.

No. For five people I’m not sure I could justify that. It’s tempting though.

We walked back from HS on the 31st because it looked like we’d have to wait for several boats. From Epcot it will definitely be quicker for you to walk. It will be interesting to see what going in through the IG is like with the sky liner open. If you decide Epcot is too busy, HS could be a good option (SWGE could change that though). We were there earlier in the day on the 31st and it felt less busy than some of our earlier days there, then we checked in to BC and went back later that night and it was really busy but didn’t feel any worse than the rest of that week.