According to an update at the top of a blog post : https://www.undercovertourist.com/blog/fastpass-plus-fireworks-parades/
“Starting Feb. 27, 2015, the viewing location for Magic Kingdom fireworks will relocate from the Rose Garden Fireworks Viewing area to the Main Street Plaza Gardens, adjacent to Casey’s Corner and the Plaza Restaurant. Guests with FastPass+ reservations can choose either side, based on availability.”

Any one able to confirm? Anyone have picture from this location…it seems to be more straight on than what the Rose Garden was? Is there room to move around or is it crowded?
TIA

I am also interested in any reports on this. When I saw photos of the new area I booked a Wishes FP. I did not know that there are two sides. Yesterday we shared some of the first images of the newly reshaped Central Plaza area (the space between the end of Main Street, U.S.A. and Cinderella Castle) at Magic Kingdom Park.

Here you are the newest Magic Kingdom Park map, which includes the new sections of the hub that are now open:

Wow, that looks great. I may book a FPP for Wishes now.

I still have about a hundred years before I can pick FPPs. Grrr…161 days, actually. Might as well be 161 years!!

I am curious if anyone feels one side will be better than the other, and why.

Without having seem the new areas in person I can only speculate, however, the rose garden was on the right hand side of the castle. Assuming there is nothing blocking the view I would go that direction. Viewing from the rose garden was amazing because it was so up close. The fireworks are all typically above the castle and to the right. However there isn’t really a bad view and I don’t know yet if there may be tree’s or other obstructions that might make you favor one side or the other. I’m sure it will be nice either way.

I have a Wishes FPP booked soon to see how things work in the new area, so hopefully I’ll have a firsthand report within a couple weeks. In the meantime, I’ll be interested in what others experience.

Anyone with a Wishes FP+ new location info, feedback or photos?

I just visited the new Wishes FPP viewing area and liked some things, while others were not ideal. Here are a few observations:

Since you asked for pictures, I’ll share a couple of the viewing area in the morning, some fireworks photos, and one grainy look at the crowd during the show. Note that I arrived at 9:25 PM for 9:45 and 10:00 showings of Celebrate the Magic and Wishes, so I was able to select a viewing area with almost nothing blocking my sight of the Castle (and I setup in front of a random tree in the viewing area, so my tripod did not block anyone’s view behind me). 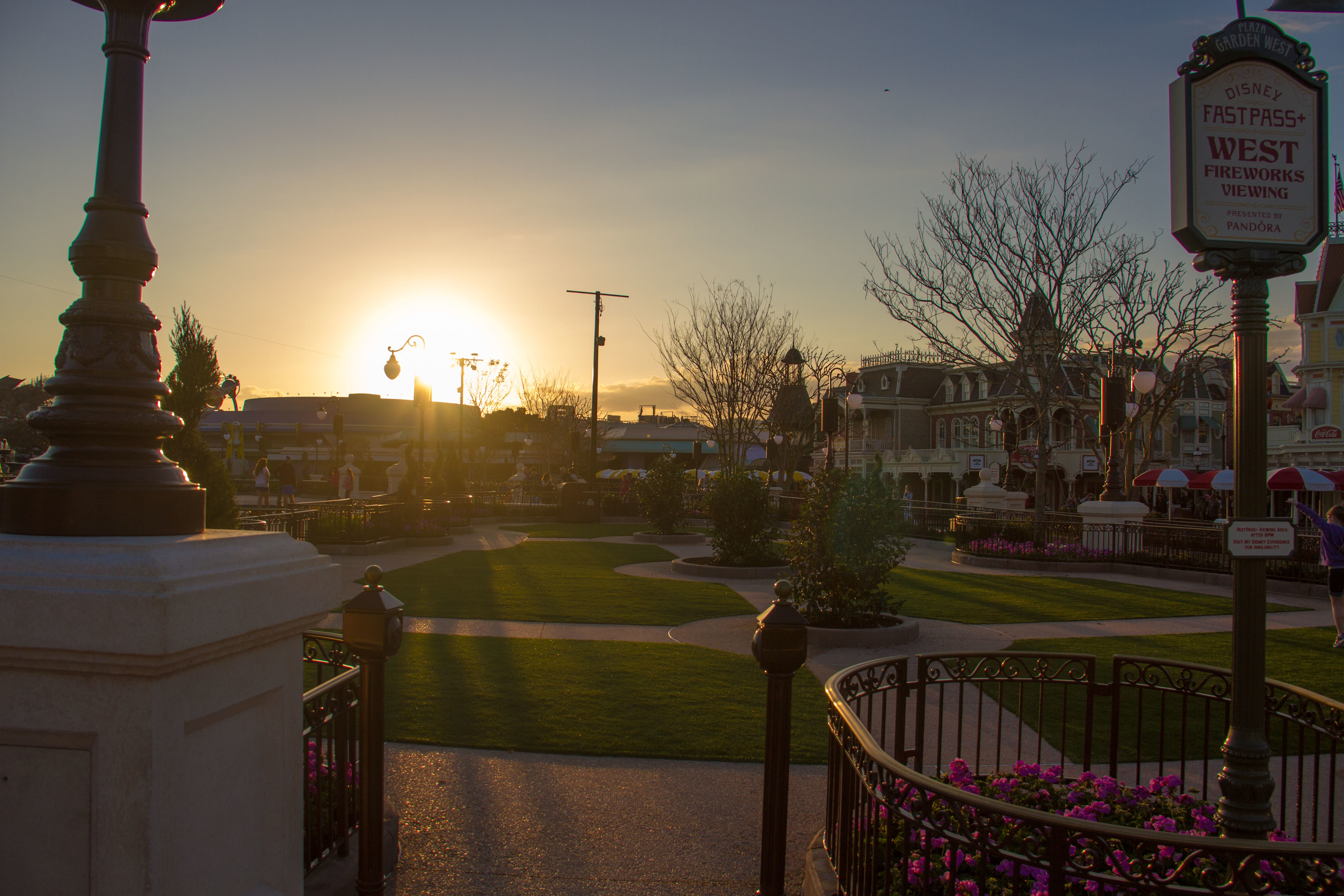 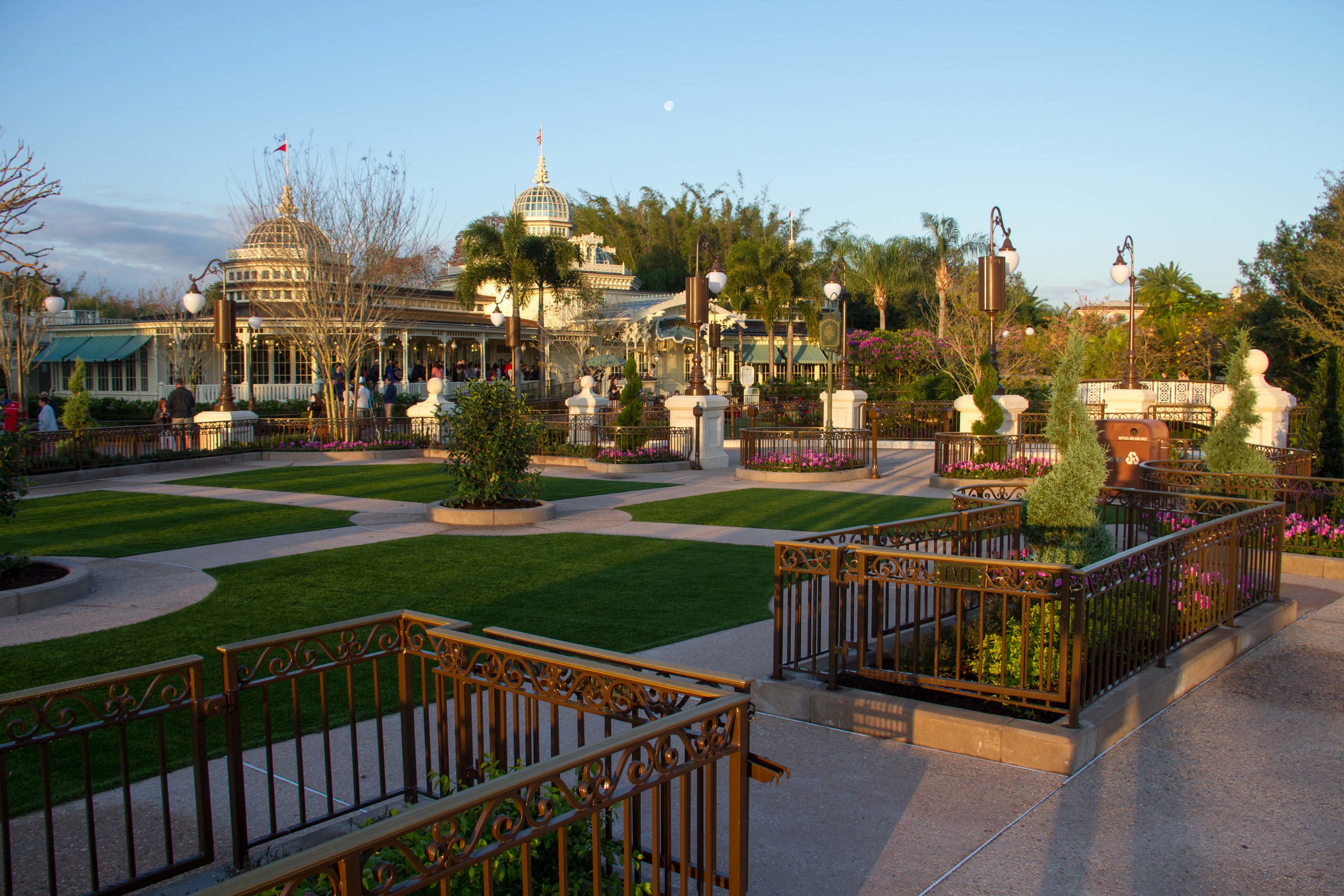 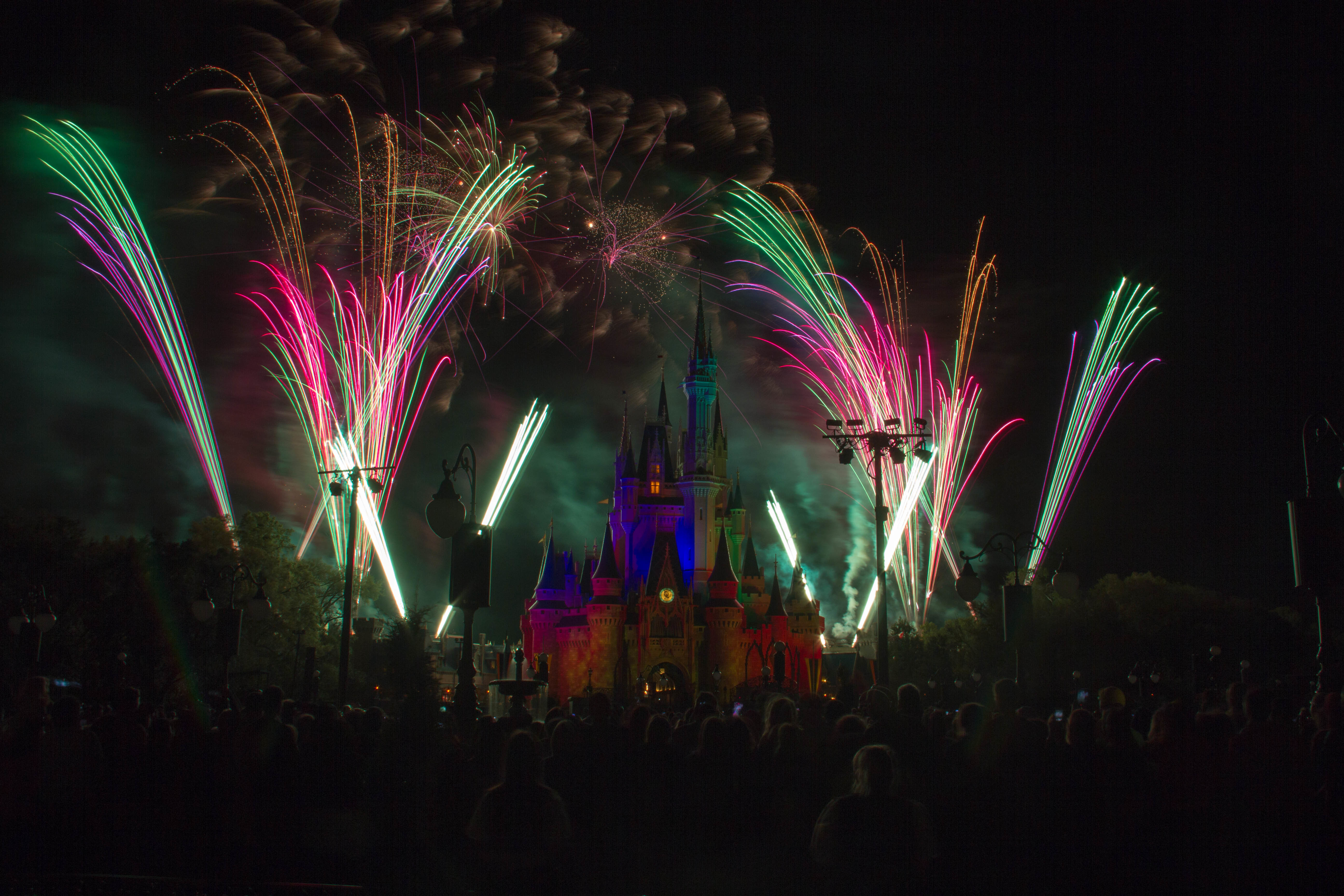 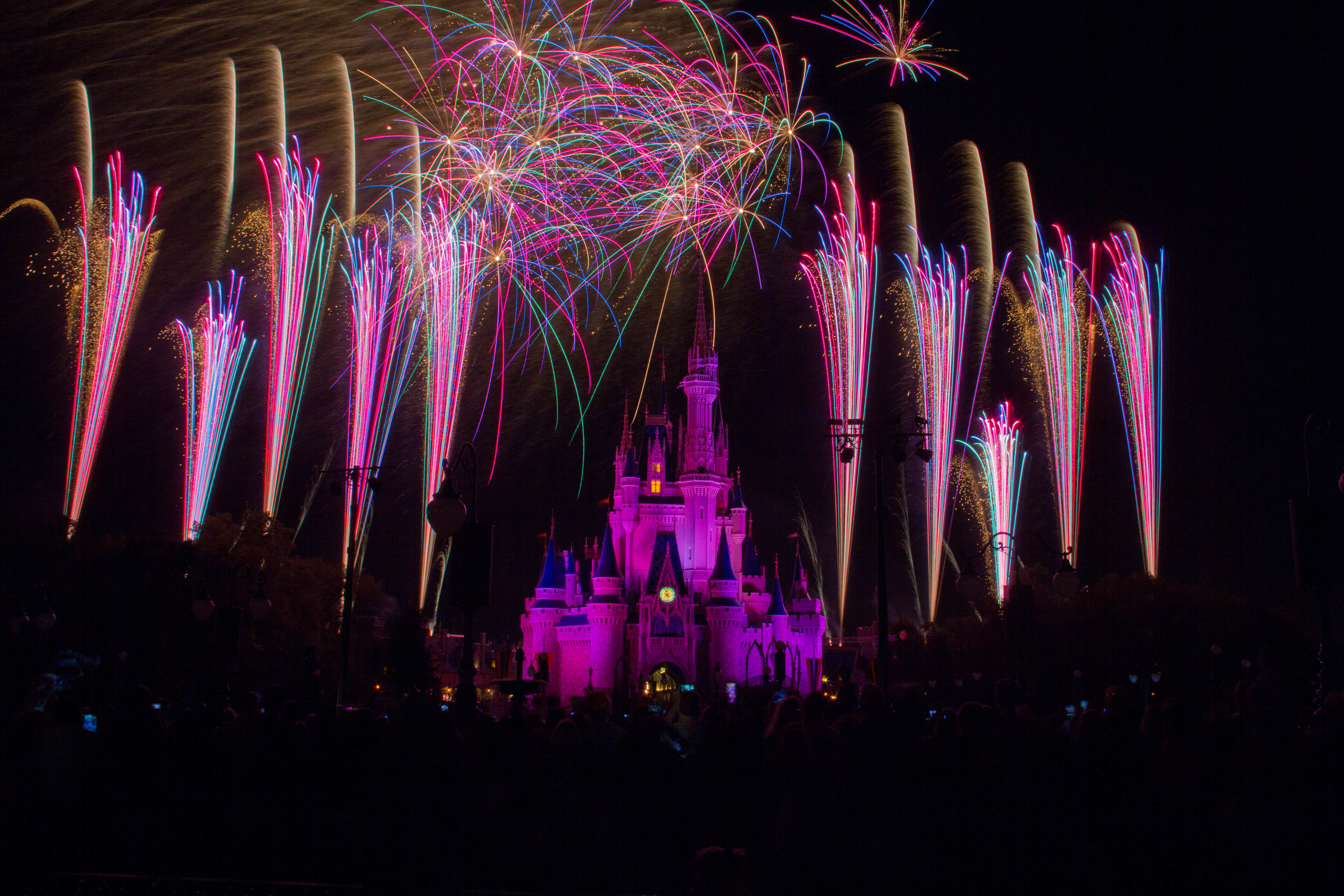 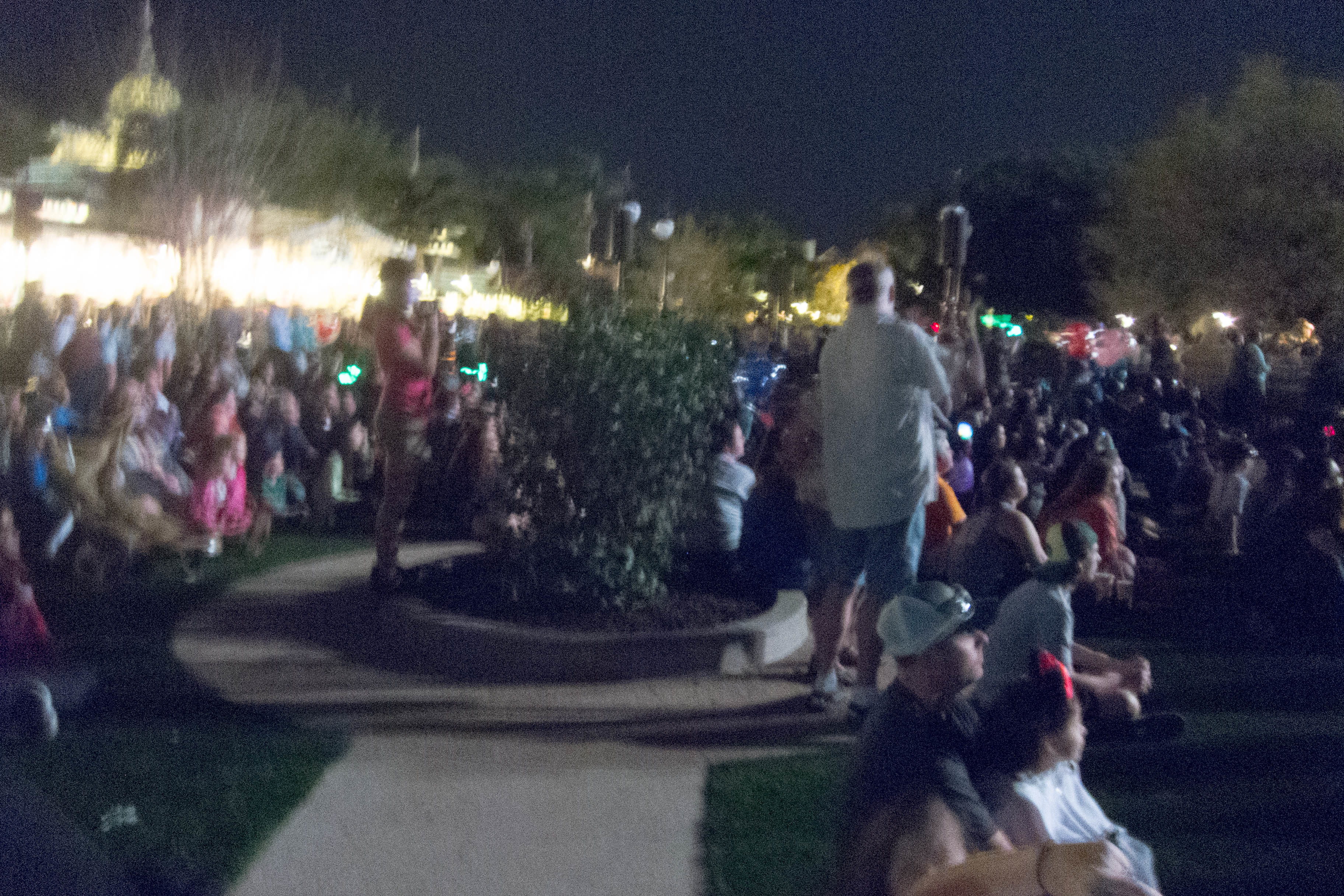 Wow… those are awesome pictures!

Well. You’ve just convinced me to FP+ Wishes for one night on my next trip.

Normally, I’d hate to be in the MK and not being able to use more than my original three FPP the whole day, but it worked out this day, since I scheduled a tour in the morning, then had a break for dinner outside the park, so I wasn’t giving up much for shorter waits on other attractions (I used my other FPP for Space Mountain and 7DMT + rode the PeopleMover, Carousel of Progress, HM, Pirates, Splash Mountain all with short waits). It made for a really good MK day!

My plan is to do another park at RD, then have a long break at the hotel before dinner at Citricos. I was hoping to see Wishes that night, but was a little concerned about finding a spot. I love it when my anxiety is relieved before it even gets bad!

In 8 days we never once got a 4th fast pass and even let some of our original 3 go because we didn’t need them. Would probably be a little different going at a busier time.

In any case, I can see several scenarios where even those who use many FPP would be able to get use out of the Wishes viewing location. Arrival day is the most obvious, since you’ll likely spend less time in the parks. At the end of a resort or water park day would also make sense, as would hopping the MK after spending the morning at AK or the Studios. Even a day at Universal or some other off-site attraction, followed by an evening in the Magic Kingdom. @theredhead’s plan sounds like a great way to cap off a day in the parks.

Do you remember what crowd level this was for this day? Also wondering if they let strollers in this area? Thank you so much for the great info!!!

Thanks for the preview @FlyerFan1973! I see what you mean about the lampposts and speakers. You had a great spot though.

Question: Can you walk around this area during the day? Is the viewing area on both sides of the hub? I had heard there would be a “back exit” behind main street soon. (iWe exited once that way ourselves on a very busy night.