Is there a discussion about this somewhere already? Not just TP’s but the new LL addition? I am having difficulties and need to see if I am doing something wrong or a known issue. When it launched my dates weren’t added in (Jan) so today first time looking at it. I think I am doing it right but no matter what I do it shows my next LL has to be after 11. 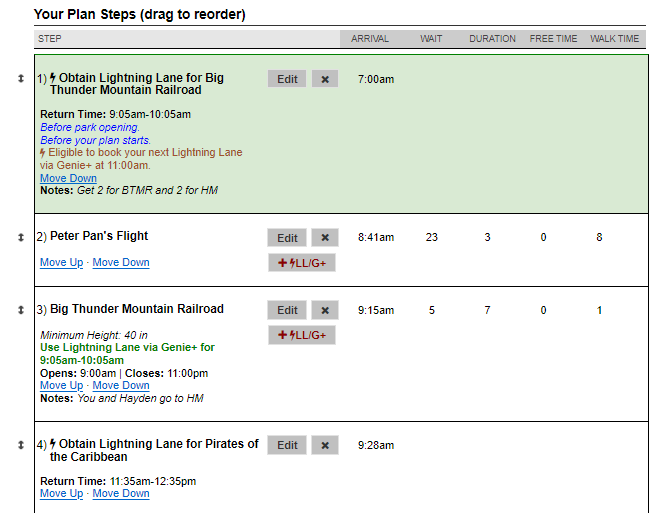 I agree, this looks off.

Kim I haven’t used the new version of the app yet. But it looks to me like this plan is saying at 7 get an LL for BTMRR. Ride Big thunder in the 9:15 -9:30 range and get your next LL for PotC at 9:28 (right after you’ve ridden BTMRR). That seems right. It’s not saying you have to wait til 11 to get the second. And it’s not saying you HAVE to choose an 11 ride time. But it’s suggesting an 11 ride time, probably because it wants you to do other things while waits are low between 9:30&11.

I think it’s saying you’re eligible to book your second LL at 11am because the regular park opening is at 9am. So 11am is 2 hours after official park opening. Could that be it?

Of course, if you use your first LL before 11am, then you’re immediately eligible to book your second LL. I think using this new TP feature is going to be very tricky for most Liners.

Yes, this is why I think it is off. And the language at the top says I won’t be eligible until 11am. It looks like it is looking for the pirates at 11am instead of when I tap into BTMR at 9:15. If I was trying to get JC then I would understand but I am trying to build a Use it or lose it method plan.

I am not optimizing I am evaluating. So when I tap in for BTMR at 9:15 and then obtain a LL for pirates it should tell me what the forecasted return time will be for pirates. I don’t think that will be 11:35 from the data I am looking at. Pirates isn’t that hard of a get.

Did you click on “Edit” on the Obtain LL for POTC card? And check that box in blue? 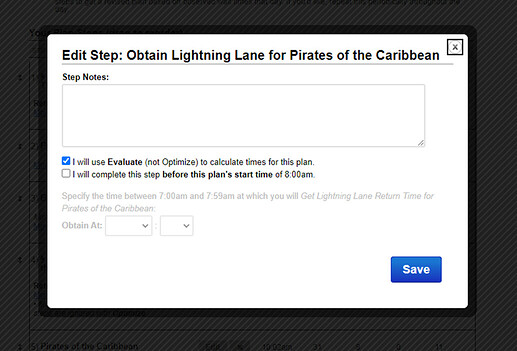 I am testing that right now. I did that for the FIRST LL but not pirates and had just figured that out.

I created a complete test where I am making it easy and saying no EE and booking super easy gets just to get the process down. It says Mad Tea Party is all gone at 9:15. LOL!

I will go back to my original and test what you suggested now. 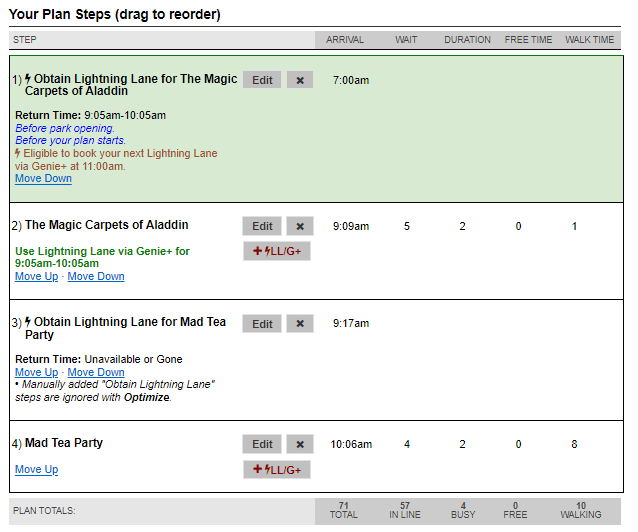 So weird. I thought that would fix it but only changed the return time to 11:40.

Changed out Mad Tea Party and put in Philharmagic and still says Gone of the day. 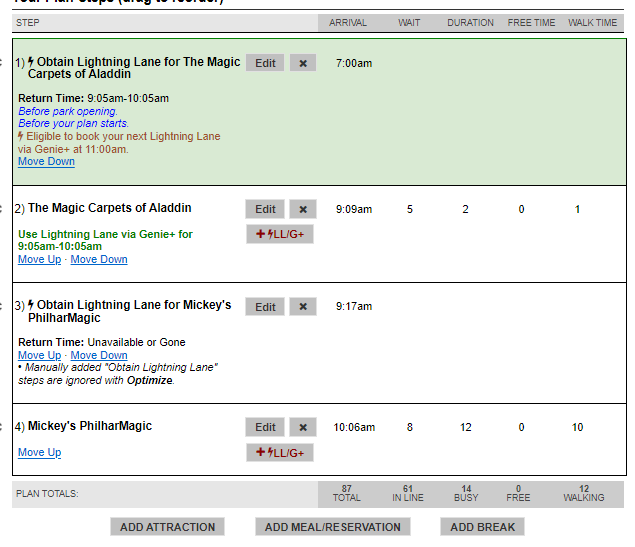 Yeah, I have dabbled with it a few different times now. At it’s current state, building a Touring Plan integrating G+ isn’t usable for me. Hopefully they get the bugs out…

Yeah, I think that is where it might be at… I was really only trying to outline an initial starting plan anyway. I’ll do the same with watching BG1 and Thrilldata info. lol

I’ll do the same with watching BG1 and Thrilldata info

building a Touring Plan integrating G+ isn’t usable for me.

I thought it was just me!

At it’s current state, building a Touring Plan integrating G+ isn’t usable for me. Hopefully they get the bugs out…

the bugs get worked out.

Now what WAS useful for maxpass was the graph theybhad for each ride of the expected time distribution of FP (under maxpass) for that crowd level. Was usually right by plus or minus an hour.

Glad to see this. (well, not really, but relieved?). I’ve been trying to build a HS plan and am running into the same issues - it says all LL are gone.

I tried using ThrillData and manually entering the ones that I think I can get. Then I optimize. It’s a lot of work, but seems to do what I want for now.

Hey @KimBeano - what date is this for again? It might be an issue with the data. Thanks!