In general when will TP put the new attractions on the options list for crafting a customized touring plan? According to the TP blog entry New Details About Three New Films Debuting at Epcot these films will all apparently debut on our Epcot day and I’d like to re-evaluate my touring plan.

awesome planet and canada are in there i believe, didn’t see beauty sing along yet. 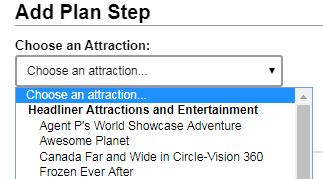 They probably haven’t released a schedule for the sing-along and IDF yet. Since the shows will alternate, they guys need actual show times to be able to put them into the TPs. Whereas the others will just run on a continuous cycle.

Beauty and the Beast Sing Along is now available as a selection in touring plans. looks like it’s on the hour and the impressions de france on the half hours.