Posted on another site. Sharing here. I don’t have any other details. I will update if I find something new. 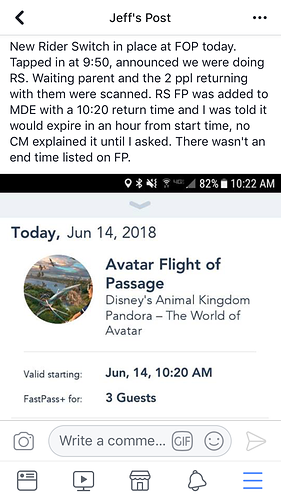 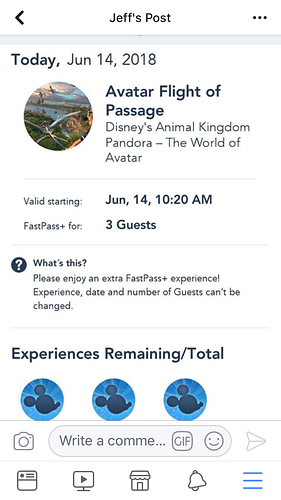 Thanks for the heads up. I’m glad our DD4 is tall enough to go on pretty much everything (apart from RnRC and Primeval Whirl) since this sounds like a bit of a pain to me. The beauty of the “old” RS was that you could plan the second ride for a time later in the day when you were done with the most popular rides and the little one(s) would be doing something else, like the Boneyard in AK. You could then spend the rest of the time doing things together as a family…

Say you have 5 adults and 2 kids, 1 too short to ride. The plan is for the first 3 adults and 1 child to ride while the other 2 adults come back on a RS. If the first group is using a FP, do the other 2 adults have to have a FP too? I’ve read that in the past in was a gray area. Now with everything electronic it seems that it will have to be one way or the other.

I literally don’t understand the point of this at all. If everyone needs FP+ (fine, a different rant) then this provides nothing. They should just get FP+ 30 minutes apart.

It was reported on Disboards this morning that the adult waiting w/ the child was not asked to produce a FP+.

This of course, is one report.

They wouldn’t need to ask if everyone has to scan in, it would just show up, right?

According to the post, the first party scanned in their FP+s but the waiting adult didn’t scan in w/ a FP+. When they asked for RS the CM asked who was returning and scanned those people in (including the waiting adult).

Ok, I guess I misinterpreted what the post meant by “scanned in”. I thought it was scanning for their FP+, but if it was scanning them INTO the RS, then that makes sense. It also seems hopeful that there is no end time listed in MDE. This would seem to work!

There was an end time…

I’m a first timer so please forgive my ignorance. Are there 2 different machines that they scan into? One for FP and one for RS? All of the info is contained on the Magic Band, right?

What happens if the standby line is longer than 1:40? Or do they adjust the window based on your estimated standby time?

We don’t know how many tapstiles they have. I presume only one is necessary. The existing FP scanner should have all the capability needed to accomplish the new RS process. The original poster implies that they had FPPs when he said "tapped in at 9:50).

Actually, my real question is whether you can swap around bands or whether someone in party 1 can officially be one of the three members of party 2. We have a family of 5 with one shorty, so we typically were able to send Dad, DS9, DS7 and then swap into Mom, DS9, DS7. Wonder if this will still work.

It’s been my understanding that the waiting party is scanned to be given a RS “fast pass.” Instead of receiving a paper fast pass for the rider switch process, it will be only electronic fast passes. The entire party will need to be in attendance so that the ones who are going to wait (with child) are able to have that RS fast pass put (aka scanned) onto their ban. The waiting party doesn’t need a fast pass already for that ride, just the people who will be riding in the first group.

Hopefully someone can confirm this though.

The person who posted on Disboards this morning stated that an RS was scanned in for the waiting adult and two members of the first party (eg First party was person A, B, & C, waiting party was D, E, & F, RS was scanned for D, B, & C).

The waiting party doesn’t need a fast pass already for that ride, just the people who will be riding in the first group.

No, we don’t know that to be true. For FOP and 7DMT, there has been reports that they are being very particular about making sure all parties have fast passes. You may get away with it on some rides, but not all of them.

SO FAR…the reports are saying you only need FP+s for the first party.

This could be a poorly trained CM, a ride that isn’t FOP/7DMT, or an indication that the new policy doesn’t require them.

We won’t know until more people use the new system.

Yes, all conjecture at this point. My guess - it isn’t FOP/7DMT. I can’t imagine Disney swaying that far from their prior rules just because they went electronic. Although, day 1, who knows - maybe there is lots of pixie dust being thrown about.

Sorry, I’m a little confused. The OP says that the RS/FP+ was added to MDE with a return time of 10:20 and that it didn’t list an end time. I don’t know where your quote is from.