It reminded me of this thread

Thanks @PrincipalTinker. That’s hood to know. Hopefully I’ll always be able to get a studio…save some points

I’m still curious why Saratoga is included in this (since the studios never have slept 5). Do VGF, CCV and BLT 1-bedrooms sleep 5?

GFV studios do sleep 5. They have that same twin fold hideaway bed. 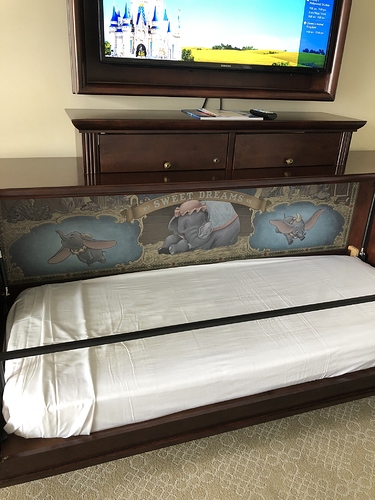 BLT and CC studios sleep 4. BLT 1 bedrooms sleep 5 Ibelieve but CC is only 4 and can never sleep 5.

BLT 1-beds do sleep 5. They have a sleeper chair which is twin size.

Umm omg SO cute! It was partially the Dumbo sleeper that sold me on the Boardwalk!

I think that I have just been looking at this backwards. I thought they were allowing 5 in the 1-bedrooms where a studio slept 5 because otherwise it seemed unfair to pay more points to sleep fewer people. But that doesn’t explain why they allow it at SSR. So your point seems to be that they just allow 5 in any 1-bedroom that can fit it?

Yes, it seems to be a capacity issue (based on physical space).

They’re adding a 5th sleeper to rooms where there’s space to do so. The fact they removed the breakfast bar at SSR to do it makes me wonder if they will also do that at BCV and BWV.

The rule allowing members to have a 5th person in the room even if there is no bed for them was simply to redress the anomaly in the short term.

However I’m sure BCV had a full refurb done relatively recently so whether they will actually add the 5th sleeper in 9-10 years time or not I don’t know. Will they think it’s worthwhile?

So what are your thoughts on why they only added the 5th sleeper to the 1-bedrooms at SSR and not the studios? I guess this is kind of where I’m hung up. Beach Club was redone in 2016 and I can’t find out if the 5th sleeper was added to the studios during that time or if it already existed. I just feel like from a points/demand/equity perspective it makes so much more sense to only add 5th sleepers to the 1-bedrooms.

I realize that this is about as low-stakes of a conversation as it gets but I feel like we have literally nothing else to discuss!

It’s possible they’ve now realised the demand for studios is soaring and they want more people to book 1-beds.

And I think the pull downs were added to BCV in the last refurb. But because of the layout they didn’t add them to the 1-beds. Since then maybe surveys showed people wanted the bed in place of the breakfast bar. Don’t know, just thinking “aloud”.

But I have strong options on what 1 bedroom accommodations should be so let’s discuss!!!
For personal reasons, I want every 1 bedroom to be able to accommodate 5 people. More than I care about studios accommodating 5 people. I really want the BC/BW 1 bedrooms to have 3 sleep surfaces. This is absolutely paramount to my usual travel party. I typically travel with 4-5 adults in the age range of 25 - 65 yo. We always needs at least 3 sleep surfaces. We very much prefer the extra space that a 1 bedroom provides, but it’s a serious issues that there is no sleeper chair or pull down.

. It has never made sense to me that you go up in accommodation size and down in capacity and/or sleep surfaces. This is probably largely what has created the “problem” of studios selling so fast and folks buying smaller contracts. Why would I pay more for less (square footage not withstanding)?

Bumping this thread back open to ask if anyone knows anything concrete about the BRV renovations. I have seen a random photo or 2 floating around lately, but we have a reservation in December and didn’t know if anyone had any “real” information.

I am in a couple of WL Facebook groups. I am hearing reports of construction happening on the 4th and maybe 5th floor. On September 12th there was a report that someone in the lodge said 4 rooms were complete. They are saying the rooms are being gutted with permits pulled through April 2023.

Thanks @PrincipalTinker. That matches what I am hearing/have seen. I just figured if they were starting large scale demo/gutting of rooms, there would have been some kind of announcement.

I know that, relatively speaking, its not a huge DVC resort… so maybe they don’t want to pull more than 3 or 4 rooms out of inventory at a time…

I doubt they can pull more rooms than that at a time. Certainly not until mid January.

I don’t think anyone really anticipated this simply because there wasn’t any noticeable availability “anomalies” that suggested they’d blocked rooms. And given the popularity of WL in general over Christmas, they probably couldn’t do so early enough.

FIRST LOOK: Boulder Ridge DVC Room Refurbishment - DVC Fan has a photo of a photo from D23 of a renoed BR studio. Seems about as real as anyone has yet. There’s no news on bathroom upgrades.

There’s no news on bathroom upgrades.

They have completely gutted the rooms so although the design may remain the same, there will be a complete re-do of the bathroom?

I would think so, but I’d like to see what they’ve done though. BR was the second DVC resort we ever stayed at (SSR being the first), and we were happy with it at the time but I think pretty much every other resort has left them on the dust. It’s really at a disadvantage being separate from the main building, and it’s just so… bland compared to other resorts.

I really hope they bring something to give a little wow factor.