I’m having the worst indecision over which flights to book.

The current state of air travel is such that I don’t think I know anyone who hasn’t had at least one delay or cancellation on a trip they’ve taken in the past 6 months. With that in mind, and with it being hurricane season I’ve already added a couple of days to my trip… we’ll be arriving on Friday, instead of Sunday. I’m planning a park day on Saturday now (instead of Sunday before MNSSHP), so I’d like to actually make it there Friday and preferably sometime before 8:30pm.

Now I’m stuck deciding whether to pay more (like 50% more) for a nonstop inbound flight to avoid the chance of missing a connection due to delays. As far as I can tell there’s no airline that’s really doing better than any of the others about delays & cancellations so I don’t think it matters, but the nonstop is Delta and the cheaper one with 1 stop is Southwest (American is midway between the two, with 1 stop).

I’ve already accepted that our outbound flight is going to be at stupid o’clock in the morning, because that way there’s more time to absorb delays.

Non stop flight 100%. Getting delayed or cancelled sucks, but sucks infinitely more when you’re already midway to you destination and the second leg gets cancelled or delayed.

Best advice is to get the earliest flight you can, the later in the day the higher the risk of a problem.

Sigh, you’re right and I know it, but I needed to hear it from someone else.

The only nonstop options for the flight home cost more than double (so the roundtrip would end up being about 2.7 times as much) so that’s right out… 5:05am it is.

Earliest flight, nonstop if possible. At least on the way down.

I don’t care if I can’t get home honestly

Where are you flying out of and where is the connecting airport? CLT is an absolute disaster lately in the afternoon and evening if that is your American connection.

I’m flying out of Detroit, and almost every American flight stops at CLT… I don’t think there’s much choice on the way home, which is why I’m flying early. I know it’s the smart thing to do, but I’m really going to be questioning my life choices waiting for the Uber to the airport at 2:30am.

I don’t care if I can’t get home honestly

I’m actually pretty loyal to American bc they are my main option out of Philly now that SW is not running any non stops from there. And bc of that I now have status with them, lol.
That said, I would choose another airline rather than connect through CLT right now.

Yeah… there were like 600 delays at CLT Saturday and the storms weren’t even that bad. I would bite the bullet and just pay for the direct flight. Are there multiple direct options?

The only other airline with a nonstop on Sunday is Spirit, and it’s a late flight (plus with bags it would cost as much as the Delta flight). The options with non-CLT stops all cost at least $100 more or are late flights.

I feel for you.
It took my husband two days and four flights to get from NY to SC two weeks ago. He will avoid flying at all costs forevermore I’m afraid.

Nope… the cheapest nonstop to Detroit on Sunday that leaves before 3:00pm is $568 for the roundtrip and it’s almost full (like no free seat selections left, so by the time I make sure we have seats together it’s more like $660). The roundtrip on Delta going down and American coming back (through CLT) is $319. That’s after Delta prices just dropped a bit.

EDIT to add, I may just suck it up and pay $100 more for the American flight that goes through DCA instead but the last time I paid a lot more to have a specific American flight (my flight in April I booked a nonstop that cost $120 more) 5 days after I booked they cancelled the nonstop (and all other nonstops on that route) and put me on the cheapest flight anyway, and refused to refund the difference.

Merely reporting our recent experience: flew Saturday 25 June on SW non-stop leaving St Louis about 5 pm to MCO. Fully expected to get delayed or canceled as we were a later flight. Regarding flight times - smooth. Arr MCO 20 min early. Did have considerable “turbulence”, delaying beverage service. Mostly bumpiness - none of the major drops I usually think of as turbulence.

We had intended to travel on Sunday but flights were like half price Saturday afternoon so we went that route. Cost $220 for one night at All Star Sports, which I booked the week we traveled.

Return flight was Sunday, 3 July, again SW non-stop, MCO to STL, 9:40 am. This flight, so close to the 4th did concern me. Again, regarding flight times - on time. No bumpiness either.

We always drive. This trip, flying seemed easier on DH, and in retrospect it probably was. We booked late in March or early in April. Our two round trip fares were about $450, total. Even before gas prices started rising, these flights were cheaper than driving.

I surely hope your experiences are more smooth than not.

Nonstop flight. 100%.
Be happy when everything goes smoothly for you and the day of, don’t check the status of the cheaper flights. Only read bad experiences on the internet so you’ll never have the impression that you wasted money.

Non stop Delta for the win. As an employee of the other non stop option, my wife and I are booked on Delta in October (and we are attending MNSSHP on our arrival day, Oct. 16) Delta should be able to rebook you faster and more efficiently in the event of a cancellation.

As mentioned go first thing in the morning. Typically the airplane and crew is there from the night before. DTW is also crew base for delta so the employees should be driving in from their homes.

I already booked this flight but it seems relevant to this topic. What do we think the deal is with these two flights leaving within 15 minutes of each other? Should I assume one will get cancelled?? Or do you think that JetBlue is responding to the holiday and adding a flight? 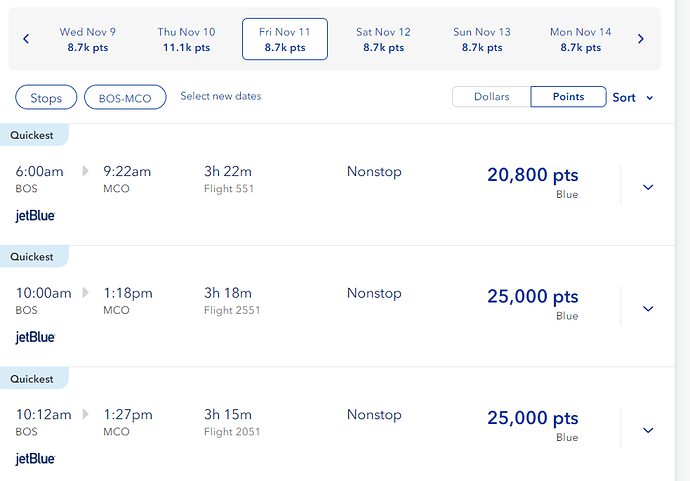 I’m guessing one will get cancelled, but which one is anyone’s guess. Are they both pretty full?

Ya they are both pretty full and have interestingly gone back and forth over which is cheaper.

Interesting. Thats a nailbiter for sure.