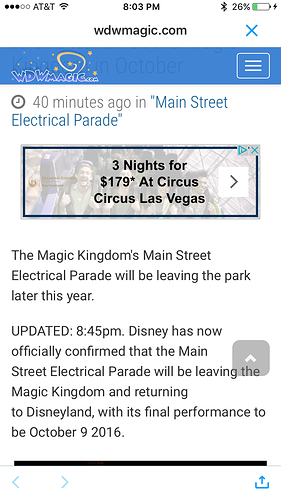 Has anyone seen what is being put in its place? I am so disappointed. We are going 11/12-11/19 and was planning to see this!

I could almost guarantee it will be Paint the Night… I’m sad to say though, it doesn’t appear that will happen until early next year as Disney announced Paint the Night will make appearances through the end of this year at Disneyland park. January is when MSEP is scheduled to begin at Disneyland. Sadly, it appears there will not be a nighttime parade at WDW during this period (Oct 10-Dec 31) aside from the holiday parades (I had my fingers crossed as well for our November trip).

Yes, I was just telling my husband that hopefully this means PTN will be taking it’s place right away but then I saw the confirmation that it will remain at DL though the end of the year! I thought September?!
We are big MSEP fans, but would love to see PTN. Have a Nov 27-Dec 3 trip and were hoping to see MSEP or PTN if it took it’s place.
I just find it odd timing…isn’t October MK’s 45th anniversary? I can’t imagine them leaving a huge nighttime void like that! Perhaps something new altogether?

As were we at the end of November/early December! So far no idea, as PTN will be in California until January. I really can’t see them just leaving a huge nighttime void like that, hoping at least something new!

I agree and that is another rumor as well. As of now, Disney Parks just said there are currently no plans to send PTN to WDW but like you said, I find it hard to believe they’ll go without a nighttime parade or show for long. I think it would be awesome to surprise everyone with a new nighttime parade for the 45th… however, it’s clear it wouldn’t be ready for the beginning of the anniversary since MSEP won’t be ending until Oct 9th. I guess we’ll just have to see… Disney always keeps us on our toes lol

Bummer. Our check-in date is October 11, so we’ll just miss it.

That stinks! We’re bummed too. MSEP was the first parade we saw on our first night of our first trip several years ago and we luckily caught it on our LAST night of our last trip in December 2015. It was perfect, b/c we stepped out of the Ye Olde Christmas Shoppe picking up an ornament and it was just about to pass by there, we had an amazing view with not many people.

This is so sad. We missed it last time due to over-tired kids and was so looking forward to seeing it this time around. Fingers crossed they have something new lined up!

I’m really hoping so! We loved watching MSEP. I personally think it’s a little stinky that they took it away BEFORE it’s even going to begin in California (January) and PTN isn’t even going to replace it right away. I’m really hoping Disney will come through and maybe reveal something new and great…can’t imagine them leaving a big gap like that in the nighttime entertainment for Oct-Dec. Especially this year being the 45th anniversary of MK.

To be honest, though, there won’t really be a gap in nighttime parades because there will be Halloween and Christmas parades 4 out of 7 nights a week.

That is true, however those are only for the parties, not regular park hours. We happen to be attending MVMCP this year and will see the Christmas parade, but I just think it’s lame for them to not have a night parade the other nights of the week, especially when DL still has their nighttime parade (PTN) through January. It just seems odd to me that they took this one away when they aren’t starting it at DL until January.

I believe the downtime is to allow for the refurbishment of the floats… as much as I love it, we can all agree the floats need some serious love after 44 years of not a whole bunch of change.

As I’ve said, I’ve got my fingers crossed that Disney comes through in a big way for WDW

Very good point, you’re probably right. I’m just reeeeally hoping they have something else planned and not a big void where MSEP used to be.

I guess this will allow me an extra hour or so to enjoy some other attractions before Wishes – that is, if Wishes isn’t removed too. I hope not; I’ve got a dessert party scheduled.

From what I understand PTN at DLR is being discontinued on September 5. Maybe it will be on its way to WDW for the 45th celebration. While the MSEP definitely has a place in my heart, PTN is an incredible parade and IMO much better than MSEP.

WOW @RobertSch6 don’t even speak that into existence! lol but I don’t think Wishes will be going anywhere for the next several years

PTN MAY eventually end up at WDW but Disney has confirmed they will continue showing it as Disneyland for holidays through the end of the year so it wouldn’t be before January.

It just kind of sucks cause we planned our nights in mk around this. Can’t change now since we have adrs already booked.

The timing is all so strange especially since they just released dining packages for MSEP this summer. Not that I really liked MSEP that much but hoping PTN makes it east because it is just awesome. I might have to actually make it over to see Fantasmic on my trip in November.

We’re in the same boat as Jazy. We planned our whole itinerary the last week of October around the one night that MK would be open late with MSEP and Wishes instead of the Halloween party. Majorly bummed.