The last time we were at Disney my wife got a Minnie ears headband (which was just adorable on her I might add). I asked her if she was going to bring it with to WDW next month, and she said no because it hurts her head and is also uncomfortable because she wears glasses and the headband interferes with them too. Does anyone have some suggestions on what might help?

She did say that she would be fine with wearing a Minnie ears baseball cap. I considered ordering her one before we leave, but the only (new) one I could find that I like (pictured below) seems a little expensive – almost $30 plus shipping. [It also says “Disneyland” on the back. (Is that wrong?)] Last time we were at WDW I don’t recall there being any baseball-cap options with the Minnie ears – just headbands and the traditional Mouseketeer hats. I might just not have noticed the baseball caps because I wasn’t specifically looking for one. Does anyone know if such baseball caps are pretty easily available at the shops in WDW or if it would be best to order the one I found in advance. 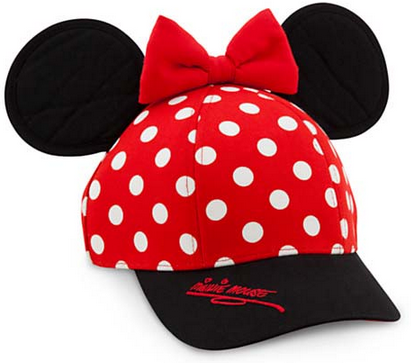 I had the same problem with the pairs of Minnie ears we bought. The headband was really tight after a while and even the 3 year old gave up because they hurt. When we got home, we picked out some comfy, sturdy headbands at Family Dollar, cut a slit at the bottom edge of the headband of the Minnie ears, slid the new headbands in and hot glued the end shut. They’re super comfy now and still very sturdy. Bring the Minnie ears with you to the store to match up a good headband width.
Although, the hat is wicked cute and I don’t recall seeing a similar style last time but maybe they are there now.

Thanks for the great advice on replacing the headband. I’ll run that suggestion by my wife. Our local Family Dollar closed, but I’m sure we can find similar headbands elsewhere.

I don’t understand what the big deal is about wearing something that hurts. After all, as Billy Crystal’s character Fernando says, “It is better to look good than to feel good.” JK