Mine Train at RD

We’ve never done RD before (I know…) but are determined this trip to make MK RD! Reeeeally want to do 7DMT more than once that day. Anyone know how long we can expect to wait SB if we go immediately to that line at RD?
Also, would RD be more advantageous than a pre-RD breakfast ADR at BOG for that purpose? Based on a previous post I think maybe it would, but people have been advising me both ways…

It depends on a few things. The overall crowd level for the day, and where you are in that pack.

For 7DMT specifically because they typically let BoG guests onto 7DMT about 15 minutes to the hour when regular guests only get in about 10 til after the welcome show it can already be pretty long even near the front of the pack. At the back you’ll be looking at a long wait.

If it’s realllly important to you I would go ahead with the BoG booking, but I really struggle with paying those prices for a very simple breakfast when I could dine at CP for literally just a few dollars more. Then again we’re not really rope drop people so we typically only make it once a trip or so.

I hear you - I initially thought to do BOG for breakfast, then thought no, CP would be way more worthwhile, but then thought why don’t we just do RD. If I’ve asked this before I apologize, but what if we have CP breakfast, and finish a few minutes before RD?

I haven’t done it recently but unless it’s changed they still hold you pretty close to the restaurant until the main crowd starts up main street. You could still be a few steps ahead of the mob though lol.

Lol, ugh the mob is what I was afraid of! I’m not much into mobs lol. Just trying to decide if that’s the case would making a pre-RD res be worth it. Decisions…
We’ll be there Nov 28-Dec 3.

That’s really a good time to be there, but really even if you’re ahead of the mob you’re still behind the pre-rd BoG folks and the line will still likely already be at 45 minutes or more. Most people book BoG only to get to 7DMT early.

For me it isn’t an issue I hated 7DMT lol. Are you late nighters at all? The queue time really goes down later in the evening especially if you catch an evening EMH at MK. But then most of the park is walk ons at that point.

Yeah I agree, that’s the time of year we always go, so nice. We have started staying later now that the kids are getting older (will be 8 and 11 when we go this year), they can hang lol. I did notice that the lines were shorter later at night when I was looking at wait times on the app (of course, lol). We will be doing one night at MVMCP as well and most rides are walk on or really short lines then (in our past experience at least).

@Outer1 Oh lord is this the typical RD situation!? 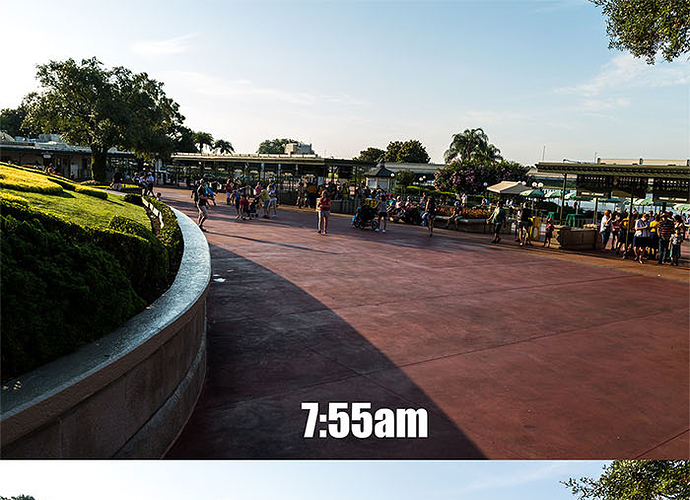 It did enlarge just had to click on it a few times.

And no not in December lol. Well at least not in December’s past. If you go Christmas week or 4th of July it’s that bad and worse. For your week the internal plaza never even filled up when we went. It’s much more relaxed during slow times.

OK! When I saw that I though “Nope, no rope drop!”

When I read further that was a trip report last year from spring break week so that explains some of the crowds… http://www.easywdw.com/easy/blog/be-our-guest-8am-breakfast-reservation-review-the-rope-drop-situation-to-seven-dwarfs-and-annaelsa-magic-kingdom-morning-touring-over-spring-break-32715/
I agree w/ you about struggling to do BOG breakfast vs. CP but both my kids have asked to do BOG again (we’ve done lunch and dinner before), and we do plan on CP dinner one night so maybe we just do the BOG breakfast for a pre-RD time this once. Still going back and forth lol.

I should have probably said I also hate BoG lol. We had a awful awful lunch there and dinner was ok but way over hyped and there are much better food options available. If I had to go because it was a special request I would totally pick breakfast, simply because it’ll be fast and at least you can get one extra ride out of it lol.

I think that’s what we’ll do actually. We’ve never done breakfast, it’s faster like you said and at least there’s the ride advantage! I really think lunch was just ok depending on what we got and dinner was over hyped and we waited forever when we checked in for our coveted reservation. Not really looking to do that again.
I don’t suppose you know how long we should allow for boat transport from WL to get checked into BOG around the 8 am time frame?

Ahhh that’s a hard question. MK resort area transportation is always out of whack. The monorail is always on a ‘special’ schedule that seems to change daily, the boats start at different times. With CP, BoG, CRT, BBB, Tours, etc… the getting in early line can get reallllly long. I would plan an hour just to be safe and have a back up plan in case the boat isn’t running that early. In that case they should have a Pre-RD ADR bus running as early as two hours before park open or plan to take an UBER or taxi to the Contemporary and walk over from there. That’ll be your fastest option.

I’ve done 7DMT just after rope drop a couple times and have waited around 30 minutes. It’s not that bad of a wait, since seeing the full queue is fun to do at least once (and maybe more if the group you’re traveling with finds it amusing). Of course, the downside to that is that you’re giving up 30+ minutes of time that you could use to visit other attractions with little or no wait.

It is possible to get to 7DMT first thing in the morning, but it requires some commitment. First, you have to arrive extra early to get to the tunnel under the train station toward the front of the line where you’ll be held. That means you won’t see the morning Welcome Show (you’ll hear it, but it’ll be going on over top of you). Once CMs release the crowd, then you’ll have to walk briskly (as fast as you can go without actually running) to stay in front on the other people headed the same direction as you. To make that work, make sure you know where you’re going (people have posted youtube videos of the most efficient route to 7DMT). If that sounds appealing to you, then you’ll get on the ride right away, with very little wait.

As for Be Our Guest, I’ve done that and it works. You just have to be conscious of what time it is and try to finish your meal by around 8:35 (leaving time to use the restroom or for anything else than might slow you down on the way out of the restaurant). When I did this, we were directed through the FPP queue around 8:45 and by the time we finished the ride, lines had already started to form from regular admission park guests.

That’s what I was thinking - the kids want to do BOG anyway so we’ll probably go that route. I think that sounds more appealing than getting there for RD and working through that crowd!

I just called WL, they said not sure if boats will be running before 8 am but bus definitely will.