On my final push to get organized for week of 10/13!
Anyone have a list of where characters are during the parties? How about the 2018 party map?
Do I just need to take notes from the app during parties to find out between now and then? This trip is a surprise for the kids so I don’t want to be hovering over my phone and have them find out

Also, if we plan to watch the parade and then move immediately for fireworks is the photo shop a good spot to aim for? I’m guarding against our 8 year old daughter getting blocked from seeing if we stand in the hub for fireworks. At WDW we always get a railing spot at the rose garden so no one can block the kids. My son is now taller than me (!) but I’m still concerned about #2…

Here’s a link to the map.

If you haven’t already read through this, I highly recommend it Disneyland Mickey’s Halloween Party 2018 Planning Guide

Right after it talks about the fireworks show, it talks about characters beginning with a section on the ToonTown Pre-Party (that is a lot of fun!) and then also lists the 2017 characters that were available. One note about how they listed it: The Pirate Pals on the Frontierland Dock & Mickey & Minnie next to the Petrified Tree were all one line setup when we did it. They rotated Peter Pan/Wendy with Capt. Jack Sparrow and we got Jack Sparrow. You had the option to skip that first meet if you just wanted to continue on waiting for Mickey & Minnie OR if you just wanted the Pirate Pals you could exit without continuing on to wait for Mickey & Minnie.

Also, when they say Jack & Sally’s line gets crazy they are not kidding (really all of the Halloween specific characters get crazy including the ToonTown pre-party where the characters are dressed up, Peter Pan/Wendy because Wendy only meets during the party & the villains. Winnie the Pooh is dressed up as a bee & is super cute & that was probably our shortest character line all night. Jack & Sally can be seen during regular park hours & we have often done their wait with 20-25 min. waits by going just a few minutes early for one of the earlier posted meet times on the app.

Near the end of the night, the villains all came out on the train station to dance to Halloween music & that was one of our favorite things (it’s not really announced or listed anywhere but I have heard of it happen before & was glad we happened to catch it). Afterwards, they went back to do their last set of meets & we got in line for Maleficent & even though the kids all passed out in their strollers in line (it was 11:30PM so no surprise), they specifically told us before that we were not to leave Disneyland until we got a picture of them (even sleeping) with Maleficent.

And then about your fireworks question, in the street in front of the photo shop is a great place. But make sure you move out into the street. In front of the Photo Shop on the sidewalk isn’t fireworks viewing & they will ask you to move to keep walkways clear (and there are trees blocking a great view from that angle anyway). They setup a roped off walkway that allows traffic to cross Main St right there, but that will be one of the bests places for your DD8 to get an unblocked view.

We will watch app and get Jack/Sally during the week. I like the villain train idea, will be vigilant to try and catch that. I will re-read the article thanks.
Is the middle of the street really ok viewing for 8 year olds? I keep thinking it will be so crowded all she’ll see is someone’s back in front of her. Maybe there’s a hill or something I’m missing. I just can’t believe standing the the street is adequate when adults will also be directly in front of us?

There are no hills or raised areas. Also, the viewing in much of the Hub is blocked by the trees which are getting pretty tall now compared to the size of the tiny castle. Last year a bunch of us were directly in front of the castle, and this was the best FW viewing I have ever had at DL. We got our spots a good hour to hour and a half before though, so will require some patience. We will be doing the same next week, it worked very well.

If we watch the MHP parade from Main Street area/Photo Shop curb will there be time to get a hub spot for fireworks? Is there a better spot for parade in your opinion to get the hub spot immediately following? The way I understand it is that the 8:50pm parade doesn’t leave much time for 9:30 Halloween Screams

Middle of the street is where all the FWs viewing is on Main St. & the goal is to be right behind the rope they will sling across Main St to create a walkway for people to cross in between 2 viewing areas. That space creates a barrier between you & the crowds in section front allowing her some room to see. The curbs will often have a lot of trees blocking your way so you want to be center or if you have to be to one side, towards the Photoshop is decent.

The last time we watched fireworks from the hub (it was in May for Pixar fireworks though so different show), they did put up a roped walkway through the middle of the hub that allowed us to have a similar effect & our kids (5&7) did not even have to stand up in their double stroller to see. But that was the first time I’ve seen it done in the hub with the Halloween party not being as jam-packed as the regular FWs viewing it would be a gamble that they’ll setup the roped walkways in the hub. The walkway at the top of Main St. though would be nearly impossible to manage the traffic flow without.

We watched the parade from pretty much the same location. You won’t be able to make it up that far if you watch the parade from anywhere else. I do recommend the second parade, it will be less crowded.

Considering that regular nights with regular crowds that kind of viewing takes 2-4 hrs to get, 1-1.5 hrs isn’t bad!!! Last year I remember we walked right up on Main St about 30 min. before (that same night you were there!!) and had no problem joining from the back, ending up somewhere by Penny Arcade so it was definitely a tame night in terms of fireworks crowds.

It was perfect, but of course took a lot of time to save the spot. But there were a bunch of us, so took turns leaving. I hate that there are so few places at DL to get a good view. And by good view I mean, no other people in my pictures, no trees blocking, can see all the projections. Even the VIP area we watched from in April had a blocked view. It is very disappointing for those of us used to the Garden Dessert party view at WDW, and who like to photograph the show, or the kids who want to see. In July when Carson and I watched, it was a terrible experience. So frustrating!

Ok we sound very similar in goals and definition of “good view”. We are used to an hour plus for a good experience. That said, because we’ve never gone to DLP before I’m trying for as specific a plan as possible.
Also, due to my need for “disaster plans” I am aiming for the early parade just in case something happens so I can pocket the late one for just in case.
If we arrive for parade view on curb of photo shop by 7:45pm (depending on how crowds are looking) and aim for right in front of statue of hub immediately following parade is that about right? Or do we just head to street and linger in the middle hoping they don’t clear us until the rope gets strung across? I like the idea of the rope giving some distance for viewing. As long as there aren’t folks that just stop and the CM aren’t yelling with flashlights the entire show.

A few pictures from the party: 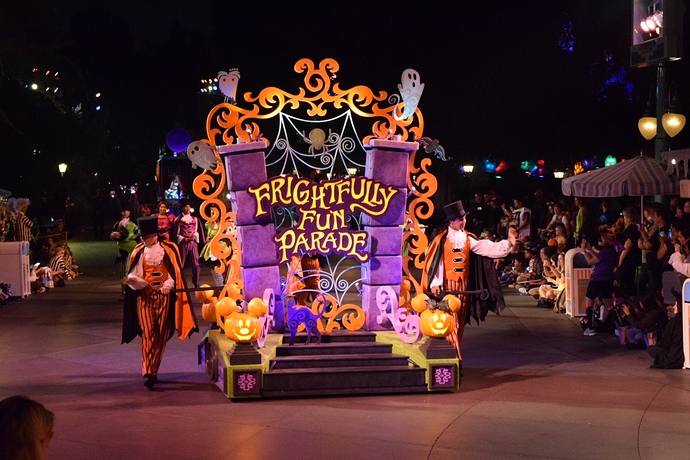 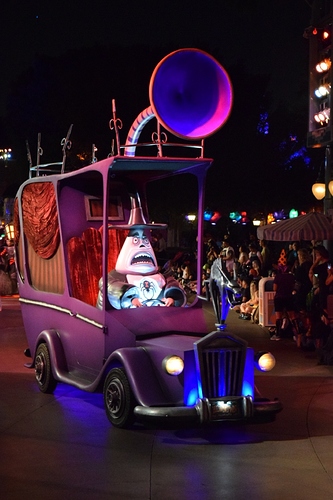 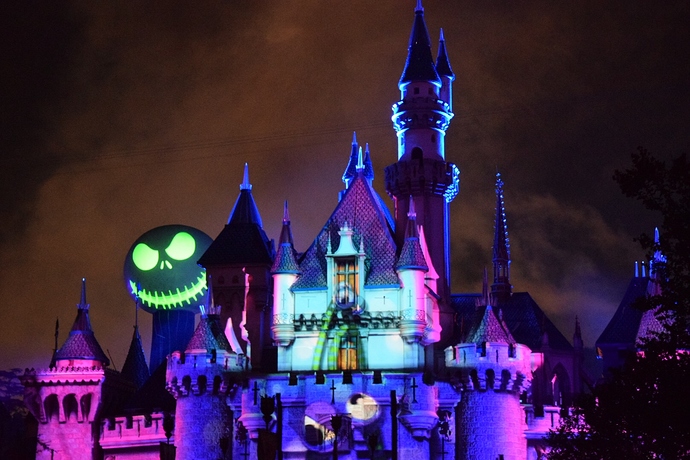 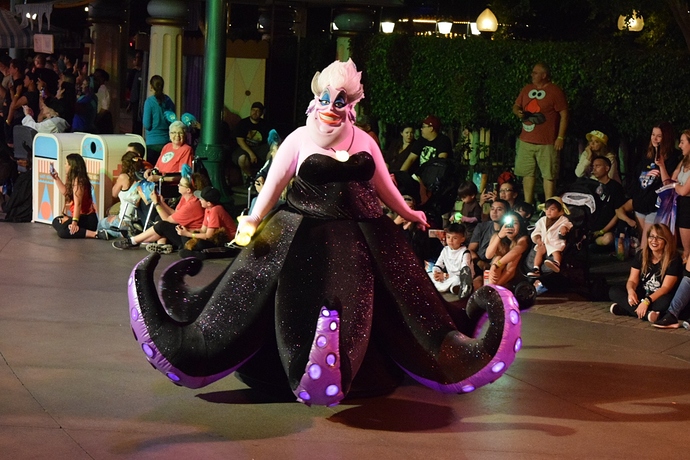 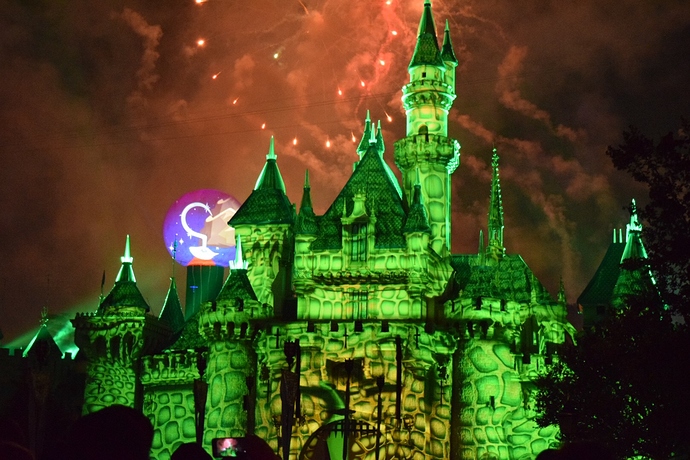 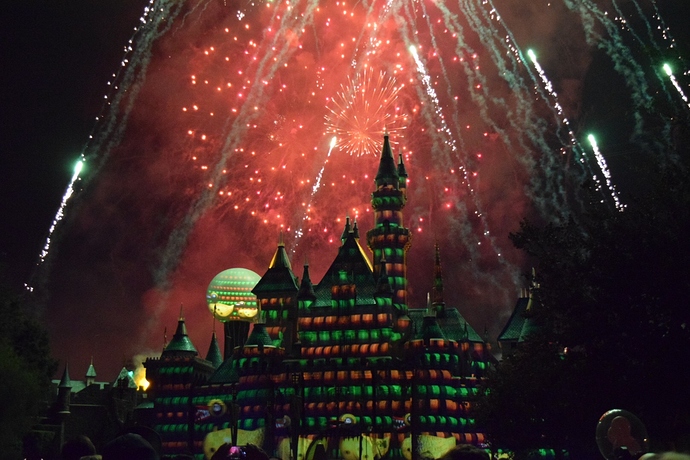 Yeah, we rarely try for the hub because it has been frustrating more times than not. We mostly are happy to watch from Main St with a view of the bursts over the castle spires (requires not getting behind any people who will put their kids up on their shoulders which is a luck of the draw & why we like to aim to be in the front of the ropes as much as possible). It’s the only way we get an enjoyable view of both all of the bursts & projections (at the expense of really seeing the castle below the spires).

Those are amazing! You clearly are infront of the statue.

I’ll let @lolabear_la advise on that, I have never had very good luck watching the parade and then the fireworks from there.

Isn’t that what you suggested? I am getting confused now.

After this last time, I will be rethinking future firework watching, at least when the family is with me. I guess I need to just stop trying to find the perfect spot and deal with the kids on shoulders and the damn trees!

The Photo Shop curb is too far back for me, all the trees are back there.