Hey guys! So we have never used memory maker in our trips, but I was considering it this time as I have a six year old and three year old this time. How efficient is it? As in, I’m used to being the picture taker, but I’ve heard that at dining experiences and character spots they take lots of pictures and I wouldn’t really even need to take pictures. Of course I would take a few haha. But I didn’t want it to be a situation where I trusted someone else to take a once in a lifetime picture to then find out they missed it haha. So I was just curious what everyone’s experience with it was and if I could just kind of sit back and watch for many of their experiences instead of viewing it thru my cell phone. Thanks peeps!

it is fantastic and I would definitely recommend it for anyone. Photographers are everywhere, fast, efficient and friendly and characters play for the camera so the photographer knows exactly what to expect and when to expect it. I would have for sure missed many of the more candid shots if I’d taken them myself. My last trip I got very candid unposed shots - particularly with the characters. The look in someone’s eyes as they turn the corner and get that first glimpse of the character, for example. Priceless! I received about 700 pictures on my MM which seemed overwhelming to me. I don’t think I’ve ever taken so many trip pictures myself. On any trip. I’d still take a camera along for other out of the way stuff I may want to immortalize, but it was a great relief knowing I had the best shots already covered.

I only have experience with it at Disneyland, but we had a group of 11 and my husband had to take my oldest to the bathroom and a photographer snapped him carrying her on his shoulders. It’s a shot I wasn’t there to capture as I was with the baby and the rest of the group. I definitely think it’s worth the extra cost, even as the photographer of the family myself. I didn’t hesitate to buy Memory Maker for our upcoming trip. I know some people say “put your camera down and enjoy” but I genuinely enjoy watching from behind the lens and I think it’s worth it if someone else captures something I might not have.

Heaven forbid I get in the shot more often because someone else doesn’t hesitate to take the photo without me having to hand over my big camera.

This is slightly off topic, but if we do NOT buy Memory Maker, can we still have photographers take our pics and have them linked to our account? I am not a big picture person and we are not planning any character meets, but I might like to purchase one or two pics a la carte, in front of castle or similar. Is that still possible?

It is definitely worth the money. Photographers are every where. Just walk up, click, click, your done. You have a very professional shot, with proper lighting, background, and positioning. Of all the pictures we got done only a couple of the night shots had poor background. We did not ever have to wait more than a minute of two for even the most popular photographers.
You should still take your own camera for the candid shots.
Finally, when you get your pictures online, you will also get a lot of Stock pictures from Disney that are beautiful.

Yes, you can still link photos even if you do not purchase memory maker. They will let you purchase them individually. We always purchase the MM though. It’s really worth it when you consider you’re also getting on ride photos and in some cases, on ride videos. Plus as the character attendants aren’t always the best when using your phone to take pictures, I like to have backups by a professional.

Definitely get the memory maker. You’ll not regret it.

We get it every time. Most of them are pretty good, some are excellent, and as with everything, a few were bad photographers. (We even had one last trip with a dirty lens!–didn’t know until we looked at the pics). All in all, we think it’s worth the money.

You can ask them to do whatever; some have a shtick — they want to take only a certain photo — usually it works, but sometimes it doesn’t—just ask them to take something else after they’re done with the scripted photo they have pre-planned. They’ll usually honor one or two requests, even if others are waiting. If no one is waiting, sometimes they’ll honor as many requests as you make.

One thing about it though is that you need to make an effort to get your picture made; it’s easy to buy it, and get your photo made once or twice in a park, and then pass by a bunch of photographers—even if they aren’t busy. It only takes a second, and some of our best pics are just because we paused for a moment to get one made.

Don’t forget to vary who they take pics of in your group----individuals, sub-groups, the whole group, etc.

@soxgo7 - I liked it a lot. In addition to ride photos and videos, you also get “magic shots” which are photos they take with you posed a certain way, then when you see/print them there is something special added to the photo (character, special effect, etc). Not every character has a photographer, you will need your own camera/phone for ones like Tarzan and Mary Poppins.

Such great info! Thank you all for your awesomeness!

We have used it before and loved it. Remember that at character meals there is not a MM photographer. The handler or the wait staff are happy to take a picture with your camera, but it will not be linked to MM. Also, if you decide not to buy MM you can still buy all your pictures from a single day after the fact. I forget what it is called but you can go into your Disney Experience after the pictures are taken and buy one days worth of pictures. We did this when we did not buy MM but went to MNSSHP and bought all the pictures from that day.

Going in May for a week with DW and DD13. All 4 parks. Not scheduling any character meet and greets. Mostly soft rides, lots of shows, an occasional thrill ride and a few character dining experiences. Seems a tad steep. Thinking I could rent a compact car for the week for the same price. Is it really worth it for us given our itinerary?

Do you have any recollection of the price range of doing this? Or is it just per photo?

When we did MM a year ago and purchased it before the trip it was about $150. For that you can get literally hundreds of photos you can download. If you buy without MM each download is about $14 I think. We had Costco do our prints for less than a dime or so each and they were ready in an hour from the time I uploaded to them

Have you considered doing a MM share with other folks here? It’ll make the cost easier to swallow than a Dole Whip!
How it works: you gather all the people that will be in WDW who want to share. Please note, you all need to visit WDW in the MM window! You create a dummy account and link all people and MBs to this account. You go have fun and get a whole lot of pictures. You come home and download all your pics through the dummy account. You’ll be able to see everyone’s photos!

When we bought MM for the single day it was $59. It did not show up as an option until after we had pictures on my Disney experience. I would call Disney and make sure it is still available before you go. You don’t want to count on it and then not have it and have to pay the higher price for MM then if you bought that ahead of time.
I agree with the others that if you are going for a ie week, It only takes a minute to stop and get pictures from a photographer, and it is worth the money.

Thanks for all the tips everyone. I added MM to our trip.

My reasoning in the end was - $150 is about how much it costs to get family portraits made and we haven’t done that in a few years. So this year our family photos will just be a lot more festive.

You’ll definitely get some seriously portrait level stuff and some of the backgrounds you’d never even know you were at Disney World and some are obvious like the Castle photos. If I’m being 100 though, my favorite pics are at Epcot in front of “the ball” day or night. It’s just massive. I love it. We just decided to pose like this on our own and we’re pretty happy with how this came out. 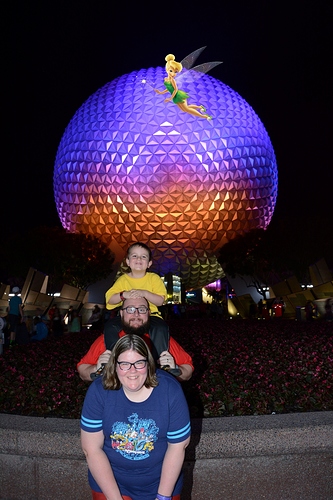 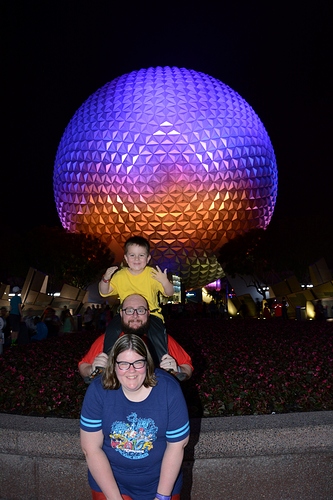 What a great pose!