Meeting the 7 Dwarfs at MVMCP

I have read that all of the 7 Dwarfs do meet & greets during MVMCP. For those who went during the 2015 MVMCP season, where did you find the dwarfs. A picture with them is the only reason I am paying the money later this year for the party.

They are at the castle walls, across from the Carousel area, in Fantasyland.

They do not give autographs. Photos only.

And the meet is quick! They take just one picture, and then it’s on to the next in line. We waited in line for almost 90 minutes.

If you’re only going to do the party for the photo then the line is probably not an issue, but it was extremely long (longer than any other line that night) when we did the party on the weekend of 12/5. We just watched while the rest of the group was finishing dinner and didn’t wait for a photo, but the display was pretty cool, with all 7 dwarves and some buckets and barrels of jewels as props. My nephew (not quite 5) thought it was hilarious that Bashful was the one who seemed to be doing “all the funny stuff” and interacting the most.

People will line up before the party starts, so you may wish to consider doing that, too, at least if there are some other party activities that you might be interested in seeing. You’ll still wait a while, but you’ll be done sooner in the evening.

My plan was to line up at 6 before the party starts. I’m not planning to leave or anything, they are just my #1 goal for the night.

We arrived at 4 and rode a few rides, then went and grabbed a bite to eat. Then we lined up for the dwarfs. My kids hated standing in line but it was fast once we got to going and we got it over with very soon! 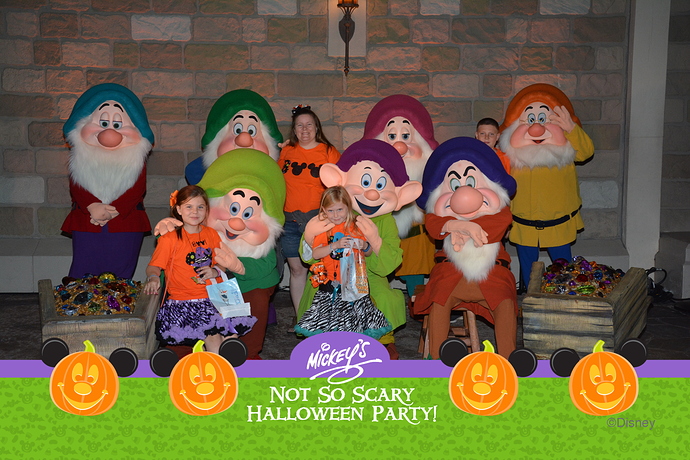