Maybe-Refurbed-ASMo vs Pop (AKA "will my eyes bleed if I choose Pop?")

Time for another rousing episode of “What would you choose?”

My budget likes ASMo. But I really dislike the look of the non-refurbed rooms and I’ve heard that the buses are not great (especially since ASMo is the last of the AS resorts for pick-up and drop-off). I do like how “Disney” the theming is… I have a feeling I will feel the “magic” more there than at Pop. Even so, I had pretty much eliminated it as a possibility because of the rooms and buses. Until I realized that there’s a possibility of getting a refurbed room. Now I’m waffling.

The pros for Pop are guarantee of a refurbished room, proximity to AoA (which I really like), and the potential for a nice view across the lake. But guys… I’m seriously worried that my eyes will bleed straight out of my head walking around that resort, especially at night.
So. Much. Flourescence.
And awkward, building-sized cutouts of dancing people.
And yo-yos.
And walkie-talkies.

Price-wise, with current summer AP discounts on my dates, ASMo is $104/$120 per night (standard/preferred) and Pop is $116/$128 (standard/preferred). So I could end up actually spending a little more for a preferred at ASMo vs standard at Pop, if I want a better shot at a refurbished room… but I’d be giving up the Pop Perks. Basically all because I’d rather walk past a giant Sorcerer Mickey rather than a giant bowling pin every morning and evening.

(The obvious solution is to make the jump to a Mod, which is what I really want to do. But I also want to go Key West in the fall. And to WDW again in the spring for Flower and Garden. And back to Europe next summer…so my bank account is muttering disdainfully “Go with a Value, dummy. Stop checking and re-checking AP rates at the Gran Destino Tower…”)

So give it to me straight: How bad IS the look of Pop, really? I’ll be wearing sunglasses anyway because AUGUST but will I need to avert my eyes from everything around me until I’m safely back in my room every night? Don’t get me wrong, I love bright colors as a rule (ahem… aqua crocs… ahem), but this takes “colorful” to a whole new level. Even for me.

Fluorescence? None that I’ve ever noticed. Maybe I’m immune to it, but we’ve stayed at Pop 3 times and the themeing has always seemed “just right” for the resort. The rooms are much better in the refurbed configuration, especially the bathroom area.

The only place I can recall having fluorescence is the check-in area at AoA.

The non-refurbed rooms at the All Stars are tiny and cramped. How many people are going with you? Do you care at all about the space in the room?

I’ve also never had any real issues with buses at any of the value resorts. They come often. The All Stars only share every so often. At Music, the buses were all just for us (in October and July) and we never went to another resort for pick up/drop off.

I wouldn’t consider Mod in this case. Keep the budget where you have it. The only thing you need to decide is refurbed vs. non-refurbed and how that might affect your stay. I would go with Pop, for what it’s worth.

I loved Pop. To me the lake makes it feel a little more “high end” then it would otherwise. We had a lake-view standard room which was very close to food court/lobby and also right by the bridge to Art of Animation. All of that was more important to me than any bowling pins and yo-yos I might come across.

So it’s a personal decision.

We loved our stay at Pop last fall. The theming fits the resort. The bus service was fantastic. Absolutely zero complaints about our stay.

I’ve stayed at Pop and ASMo (non-refurb) and I’d pick Pop over ASMo hands down. The theming didn’t seem extreme to me, especially since you’re already experiencing sensory-overload from being at Disney. Go for Pop!

Fluorescence? None that I’ve ever noticed. Maybe I’m immune to it, but we’ve stayed at Pop 3 times and the themeing has always seemed “just right” for the resort.

That’s good to hear! I’m guessing the colors pressed portrayed on the Disney site are not quite true-to-life, haha!

How many people are going with you?

I’ll be solo, so space isn’t a huge concern. But I do love hope much more open the rooms at Pop appear to be when the second bed is folded up.

would go with Pop, for what it’s worth.

That is helpful. Thanks!

We had a lake-view standard room which was very close to food court/lobby and also right by the bridge to Art of Animation.

That sounds perfect! Do you happen to recall which room you were in, or at least which building?

Haha! So true. Which is why it’s nice to have a calm, peaceful retreat from all the sensory overload at the end of the day!

A lot gets made of the buses at the All Stars, but unless you go to or from the parks at a non-peak time of the day, you won’t share a bus. It’s truly a non-issue and shouldn’t keep you from staying there.

I’m in the minority, but if I were you I’d choose Movies. For me the fact that it doesn’t have as many rooms as Pop means there’s less people in the food court, at the buses, pool, ect. Plus they’re nearly done with the refurb there so your chances of getting new room are pretty good. It’s my understanding that Fantasia 5 is the only building not started there yet.

Have you checked out Priceline Express? There are dates where All Star Movies is $74/night. Would that sway your decision? 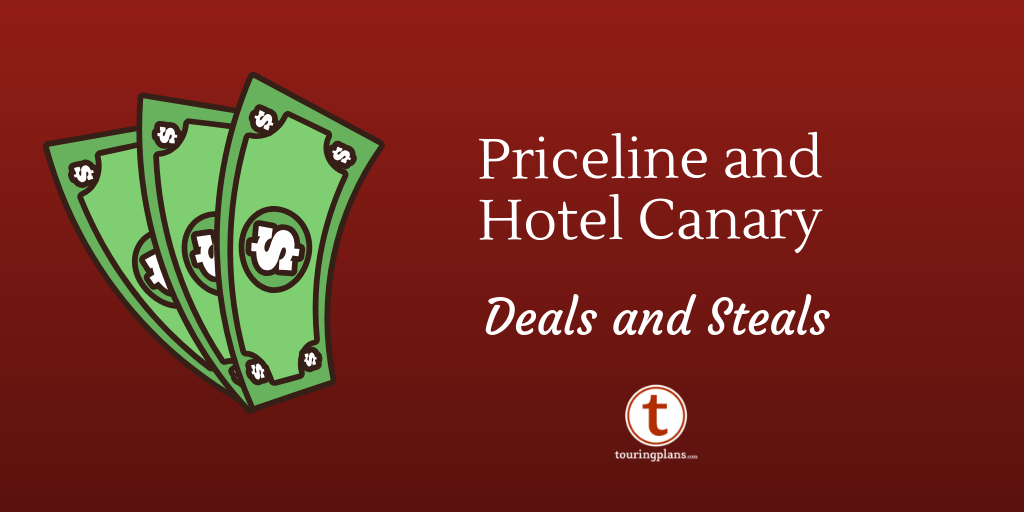 Share This!The last month or so in the Priceline Deals Annex has been one of much clicking and few results.

It might! I did check a couple days ago and didn’t see anything that looked like it might be on Disney property for my dates, but I’m also not very good at predicting express deals! My dates are 8/19-8/26.

That sounds perfect! Do you happen to recall which room you were in, or at least which building?

Yes!! It was 5113 in building 5. Check out tp roomfinder for the view. I was fortunate in requesting and receiving the exact room I asked for. It was ideal. Also, we didn’t use the main pool but it’s around the corner from the pool as well.

Thank you! That’s super helpful. I’m leaning towards Pop (I think the benefits probably outweigh my concerns about aesthetics) and it’s great to have a starting point for which rooms/buildings people have enjoyed in the past!

I did a solo trip in May and stayed at Pop and loved it (and we usually go with Deluxe resorts, so that’s saying a lot!). I thought the buses ran well and there were a lot of yummy offerings in the food court (I may or may not have had a nightly cupcake). So I would definitely go Pop (unless a Priceline deal for AS comes up, saving $50 per night is significant).

shucks, I think you are right, 19-26 is probably too late in the month for those PE deals.

Thanks, everybody! I ended up going with Pop in the end. I really couldn’t pass up the price and y’all put my mind at ease that I wouldn’t be permanently scarred by the theming.

I’m requesting a quiet top-floor room facing the lake in the 60’s sections, so

Wondering if you could give us an update, did you stay with Pop and how was it?