So I know that MB’s are a “wire to a bucket” to paraphrase @ryan1.
But here’s what I’m thinking of, and hoping it will work.
We have many MBs from recent trips, so not buying any for this trip. DS generally doesn’t wear his band because his chair is so low that he can’t reach the tapstiles plus he likes to pick at it and I’m worried he’ll lose it. So one of us usually ends up wearing 2 bands. This can be annoying, especially when we have to trade his band back and forth with DAS if one of us isn’t riding.
I was thinking of getting a couple of the puck holders for watchbands and each of us would always have one of his pucks on us. I know in theory this should be fine, but was curious if anyone has ever used two bands simultaneously in the park and if it was a huge CF or not.

I’m going to try a puck holder too so I can wear a watch and avoid having to use my phone for the time. I don’t know what you mean by using two MBs? 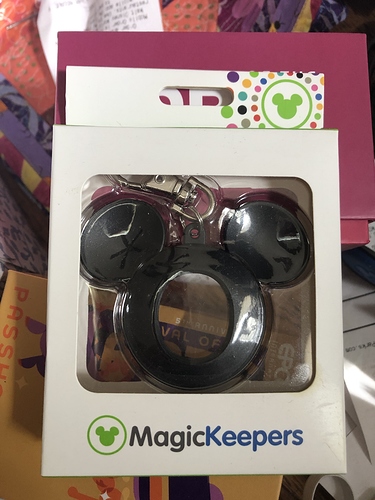 We have multiple bands from recent trips for each of us. DH would wear his band, plus one of DS’ pucks on a watch band holder, I would do the same. That way when getting DAS and tapping in, either of us could tap for DS. Up until now we’ve just been trading DS’ band back and forth, which is annoying.

I would do the same think for my son who just never really liked wearing his magic band. I would have my magic band on and a puck attached to my watch for my son. I kept them on opposite arms but on the same arms everyday so i rembered which arm was who at park entrance. Other tban that it wasnt really an issue…until he decides he wants his band to open the door by himself. Then I have to give him my watch.

I don’t see why using more then one would be a problem if they are active. You’ll have to let us know how it works out.

I know the tech is buggy and sometimes having too many active bands can cause glitches. I was worried that having two tapping in on the same day in the parks would be glitchy too.

I know for sure spare bands work simultaneously for photos (after accidentally taking spares in my bag and ending up with forty million duplicates of each ride photo).
I don’t see any reason why they wouldn’t work for other things.

The only point to note is that using a band that hasn’t tapped into the park can be problematic, but that’s if the whole MDE profile hasn’t tapped in. If the profile tapped in on one band and then you used another band, I think that’ll be fine.

Last year I had a hiccup where my ordered MB was sent to the hotel instead of to my house. I went to MK as soon as I landed and used an older MB. Once I checked in that afternoon and got my new one I used it later that night to return to MK with no issues so I don’t think you’d have an issue.

On a trip last year we gave our extra bands to my brothers-in-law so that after we left they could use the rest of our anytime FPPs and that worked (so same account, same day, different bands) so I think you’ll be fine.

I think the important thing is making sure each MB actually taps in. If you try to use a MB in the park without having tapped in with that exact band, it can cause headaches. But I might expect them to question tapping in with two MBs for the same person, since it could seem like you are trying to use someone else’s MB to get into the park.

I always travel with 2 bands just in case something happens with one. Just like @LTinNC82 I have used more than one band on the same day for the same park. Actually my spare band is usually in my backpack while in the parks.

So, then, Disney changed something. It used to be that if a MB were used that wasn’t tapped in with, it could result in the account being deactivated or something. Sounds like that is no longer an issue.

@ryan1 perhaps you’re thinking of the situation when someone takes another person’s MB to the park with them and tries to use their FPPs. That used to be a problem.
For example, someone stays behind at the resort and doesn’t tap into the park, when the members of the party try and use their band for a FPP it gets flagged and deactivated.
There’s never been an issue with someone leaving their band behind with a member of their party if they leave the park. That works fine.

All of that is moot though because OP isn’t sharing profiles in any form, just wanting a second band to work in a profile that’s already tapped into a park.

perhaps you’re thinking of the situation when someone takes another person’s MB to the park with them and tries to use their FPPs. That used to be a problem.

Well, duh! Of course. Forgive me. You are right. That is the problematic scenario! So ignore me…well, unless you already do…in which case me saying to ignore me is rather moot.

Valid mistake, I shall let it slide

I can’t speak to the multiple bands on one person, but I can give some feedback on the watch band puck holder. Our 2020 trip was our first with a MB. I was planning to wear my Fitbit, so I got a puck holder. I found wearing the puck on my Fitbit band really annoying and uncomfortable. After one day, I ended up just wearing both the Fitbit and the MB on the same wrist and that wasn’t too bad.