In other posts I saw a few people complain about Magic Band 2s coming off wrists. I was wondering if this is a common problem, something that mostly happens to kids, or just some people.

Mostly replies to these kinds of posts are from who have had problems so if you’ve not had problems with the MB2s please also reply.

Never have had it be a problem myself.

Because I’d read it was a problem with these bands, I brought little elastic bands. Me and my mum used them, DS and my dad didn’t. DS’s came off 4 or 5 times in 12 days. My dad’s was fine. I was constantly checking my elastic bands were in place because it never felt secure. They are way too big for small wrists IMO. The old bands were much comfier and felt more secure. Not one of us had any issues with those for 15 days (I actually wore mine for a few days when I got home too. No problem. No elastic bands required!).

I’ve had two trips with Magic Bands. No problems!

I haven’t used MBs yet, but I did play around with the ones we ordered briefly.

It is possible the tolerances of the bands are imperfect so that some might be more prone to issue than others. It is also possible that folks are not pressing them in place well enough. But the ones I tried seemed to be quite secure.

BUT, since people have complained, I think we’ll just use some of those little tiny hair rubber bands (you know…the ones with the diameter of like a dime that are almost transparent). I think that will just give a tad extra security without being cumbersome.

By the way, to do a poll you need to click the little gears symbol 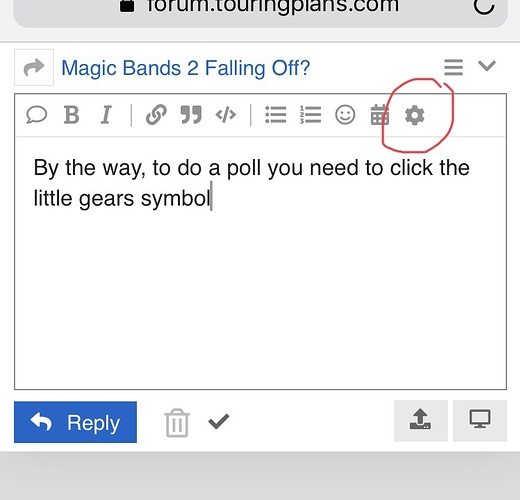 and the option is listed there.

I had my version 1 fall off on Mission Space.

Never had an issue with version 2.

Thanks to the help of @missoverexcited this is now a poll!

With the old bands my son lost his and I almost lost mine. The next time (with the new bands) we bought Bitbelts and my son lost his swimming because he didn’t secure it properly with the bitbelt. A little girl did recover it at the bottom of the pool for him. Mine did come undone slightly but because the bitbelt was on it didn’t come off.

Edit: I added my vote to the poll

I had version 1 fall off in the airport (but saw it). I had a version 2 with my AP slider fly off my wrist on Buzz. They looked but could not find it.

I ended up ordering magic band sliders from Etsy just in case - hoping we wont have any issues.

I read about the problems with Magic Band 2 coming off easily so I bought bit bands ahead of time just in case, and I was glad I did. With the original MBs we got in 2014, my kids who were 2 and 4 at the time struggled to take them off and usually needed a parent to help. With the new ones I got in 2018, they are much easier to remove. I found that accidentally snagging it on my kid’s clothes when picking them up could pop mine loose.

As always, results may vary, but I was glad to have the extra security of the bitbands for only a few dollars. Rubber bands or hair bands could certainly be used also if you don’t want to spend anything extra.

Mine have stayed on but like others I also use the bitbands. If you hit or scrape your arm on something and it catches the band it will pop right off. Most adults can probably avoid this. I’m clumsy and my children do not always pay attention so we all have bitbands.

Just for fun I pulled out our old bands. The old MB1s appear to be a little thicker and a little more rigid. It feels a little bit harder to unhook the MB1 also. I think maybe even more important is the length of the 2 little pegs that close the MB. On the MB1 they are noticeably longer, even relative to the slightly thicker material. This makes them extend a little bit farther through the other part of the band. I wonder if maybe the MB2 problem is related to sometimes not having those pegs extend far enough through to actually “lock”.

Regardless, even when I push it through as hard as I can while not wearing, the MB2 is still easier to open.

With the original MBs we got in 2014, my kids who were 2 and 4 at the time struggled to take them off

I struggled to take my original one off!

Here’s pictures for comparison (top is MB1, bottom is MB2): 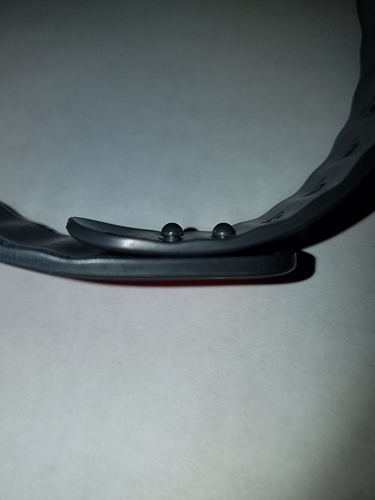 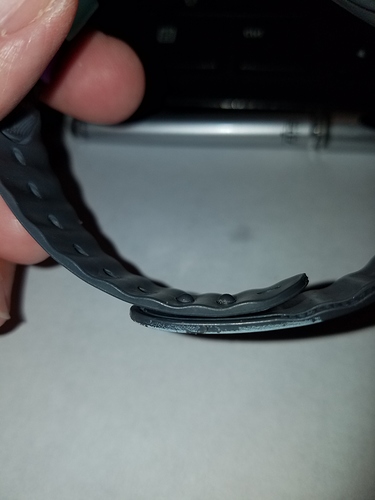 I posted recently about this but yes, we gave our DS10 a hard time about losing his, actually DH was pissed I let him get a new one, until we both lost ours too within a few days. And we are pretty responsible people. I felt like I was checking mine constantly the whole week. But one day poof the thing was gone! All it takes is a brush against something to open up. On our last trip my husbands aunt lost hers. In fact I can’t recall a trip since MB’s came out where at least one person’s band didn’t get lost. I really don’t see why Disney doesn’t redesign or provide some fix given the vast amount of time I’ll bet cast members spend helping people in guest services who have lost them, and returning them to people (they did find DH’s and mailed it to our home).

As with a few poster we haven’t had issues but only because we did buy the “bitbelts” we had two close calls but the belts saved us. These were MB2. Also anyone know why Disney stopped selling MagicSliders?

I had one come off on RNRC, I didn’t realize until I got off. Looked back and there it was on the floor of the ride vehicle. Not sure which version of bands it was though, we have had quite a few trips. My daughter lost one on HM, but that was at least 3 years ago so might have been the original bands. We use AP sliders now, so they are on securely.

It seems silly that Disney doesn’t AUTOMATICALLY supply sliders with these things since they are so integral to their parks now. Saving themselves a penny each? Probably costs them far more than that when they have to replace lost ones as a result.