So I’m starting this 9 days into the trip- I’ll come back to key points on our YC/ parks time when I get chance. But said I’d give a write up on Starcruiser- if I start it now hopefully I’ll keep on reasonably close to time.

Didn’t get the promised message at YC to say we had the late check out. I was doing a final laundry run so asked at front desk and they confirmed it was on our reservation.

So after a pool/gym/packing morning, we got into costume to get ready. None of us are into cosplay- I have ds18 who is huge into Star Wars & excited to look like a Jedi plus too cool for school DS15 who finds everything we do a total embarrassment, even tho he loves SW.

Ds18 finally got out back story- DH and I are from Nanoo & met studying at the Royal House of Learning. He is Stefan Halcorr, who went on to be a teacher in the Jedi temple on corusant. He became concerned about safety after the death of QuiGon & moved to be part of the security team in the temple- there is a whol detailed storey there DH has been given

I am Cha’Rel Halcorr, civll servant on the senate team brokering peace treaties after being involved in the trade federation negotiation.
I heard of trouble brewing on the senate prior to palpatine take over & warmed my DH to be vigilant. As order 66 happened, DH & i rescued a youngling named Zapal Felian who’s master was killed in the temple. We escaped to Naboo with a clone who’d had his chip removed by his Jedi partner, they were later killed leaving us with adopted sons ex Jedi trainee Zapal and part clone part Jedi Zain

A few years on and we run Halcorr Securty as a front for hunting for Jedi artefacts.

There is more detail but it’s been hard to explain much to the crew- but it’s entertained DS18 anyway.

Ok so we drove up to starcruiser having had to drive back to get the passprts id left inYC room safe. Waited a short time in the car then checked in. No chance to start giving back story at the start as per Len/ Hank- they just wanted to process us in.

Same as we arrived in the atrium of the ship- maybe S we weren’t among the 1st on, but no characters then to talk to & the basic crew didn’t seem interested in stories.

Room is cool tho ds18 feels the sleeping bag & hard mattress give flashback of his recent adventure trek in Borneo.
Headed to lunch then to datapad orientation as kids didn’t have play Disney & DH phone cldnt load it.

Will load a few photos then I need to sleep as it’s midnight and I think tomoro is full on!
Will fill in details as I get chance 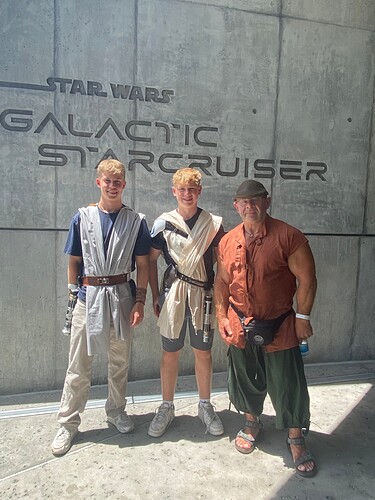 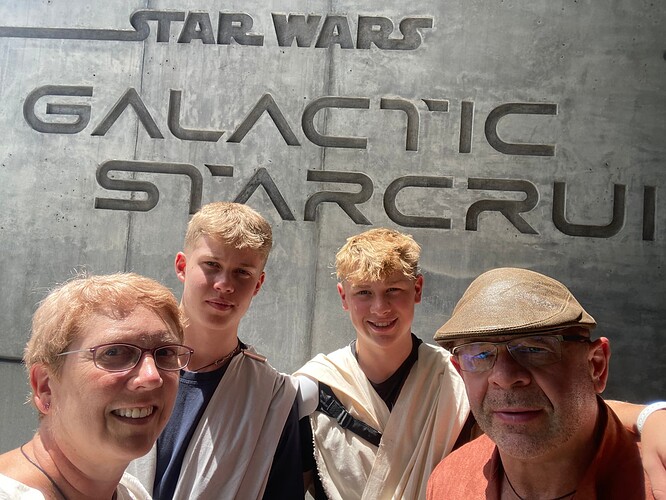 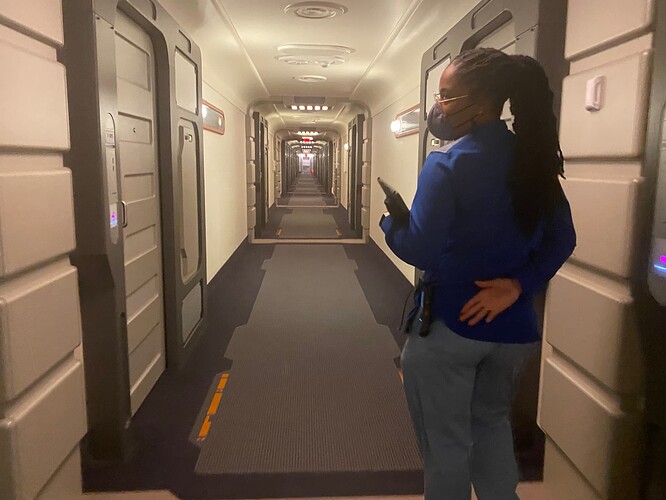 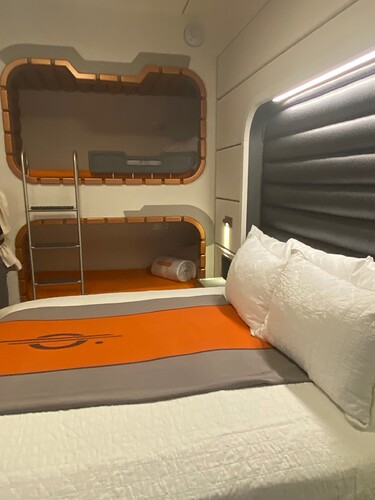 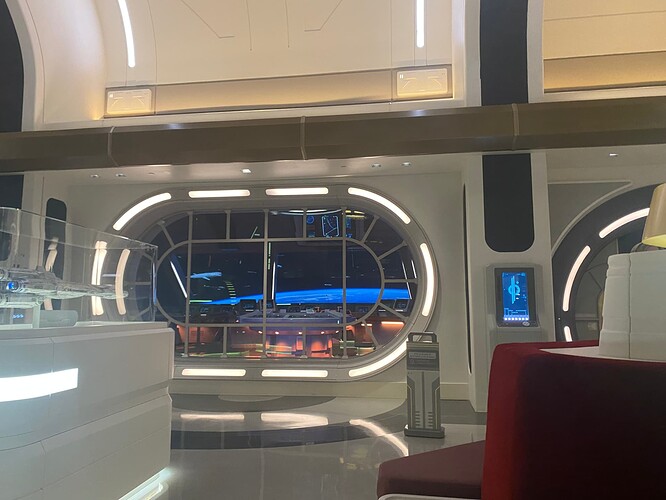 Awesome! We are currently planning to go to the Starcruiser in … 2027!

So following your trip report will have to do for now. Lol

I am so looking forward to following along. Sleep well.

What a great backstory!!!
I hope you get the chance to use it

I’m so excited for you and your family Hodg!

Thanks for posting a trip report on this! Have a great voyage.

Room is pretty nice- yes it’s compact but it’s pretty well laid out. The bunk beds are compact- ds18 is about 5’10" & just fitted.

We headed back for lunch- food less coloured than I expected for lunch at least and all pretty good.
Then to datapad orientation- easy to set up boys w play Disney accounts but DH borrowed a datapad as his old Samsung struggled with the app.

Went to the shop where ds18 is very tempted by the expensive Jedi robes. Bought the backpack I’ve been eyeing up since @Crispy’s report, a Xmas ornament & a keychain. Well tried to buy- MB no longer had charging capacity since new check in, Apple Pay declined, went to get credit card- declined. DH’s 2nd card too. Finally got DH card allowed in mde but we still need to call bank in U.K. for usual card. All a pain as that took us close to the 4pm muster.

As reticent Brits we found it quite hard to interact w the CMs around. The basic cast has no interaction mostly, just the key players. A few loud individuals muscled in on any important characters.

So the story is under way with the arrival of lieutenant Croy, we did some engineering tasks and hacked the restricted access to the ship

Then time for light saber training - bit early at 5.30 so hard to link into sone of the story development but still cool

As reticent Brits we found it quite hard to interact w the CMs around. A few loud individuals muscled in on any important characters.

I hope you can muster some bravery and channel any inner am-dram parts of you! Good luck 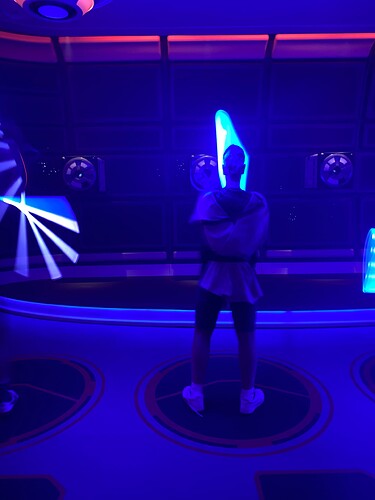 Ooh, we just booked for our January 2023 trip, so I’ve been excited to hear about and follow along on some more recent trips! Hope you have a great time and that it isn’t only loud people getting all the action…

Didn’t have high expectations but it was pretty good.
As we came out we discovered the stowaway passenger trying to sneak around the ship while keeping Croy away. Had to leave that to go to bridge traing at 6.30 again a bit of a shame to leave the action.

Bridge training is a series of push button games. After the final training round there was a live action where we were on shields- wldv been more fun shooting things! 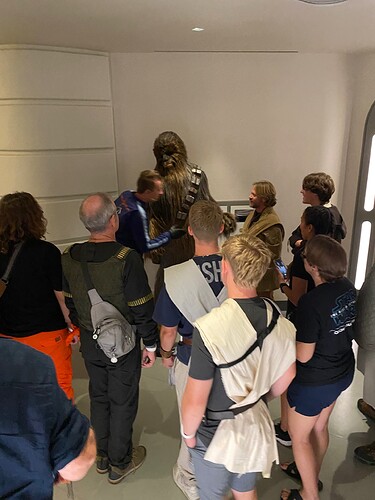 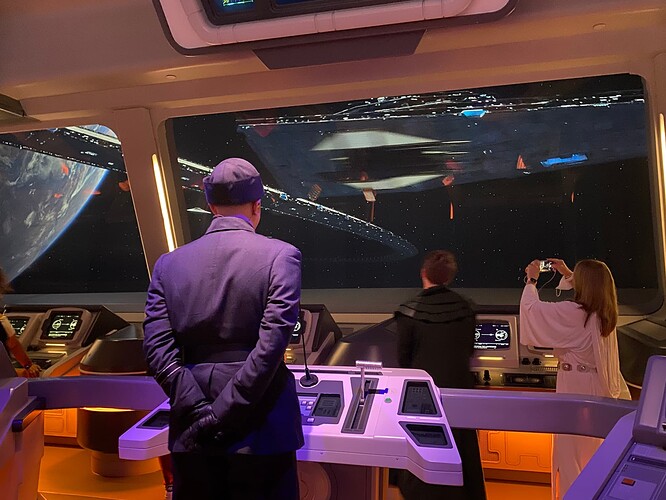 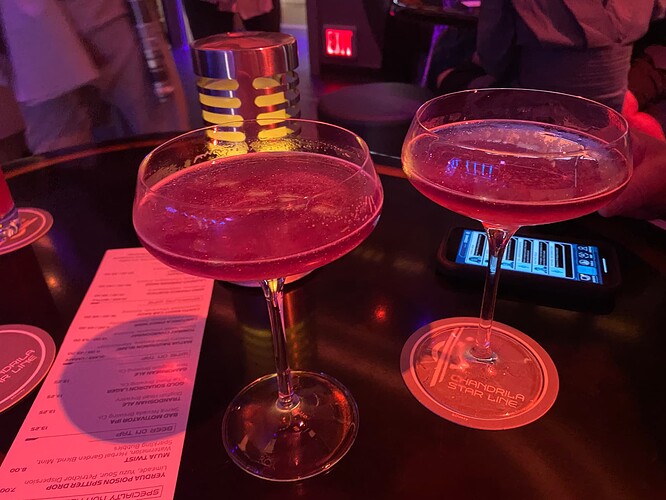 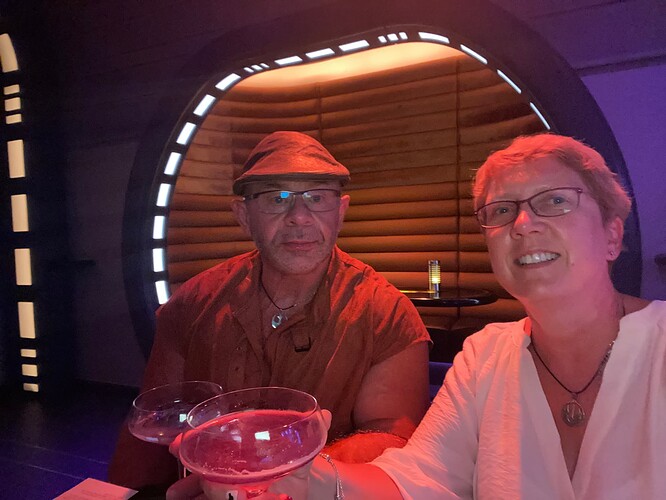 We were sat at a long table with two couples just in front of Gayá’s stage. As we sat the waiter asked if we’d like to be upgraded to the Captains table the next night- we’d not been able to book it initially but Nicole from TP had put us as a waitlist for it when she booked for us. Of course we said yes! Glad I bought a star wars style evening dress now.

Dinner was v good. Action after was fun & we had more interaction with some of the characters. Got little bits of the story in there but not a lot.

Bit more formal action after dinner then as they announced the end of activities at 10.30, boys went for their light sabers & we joined a few other people on the bridge and did photos - until a CM firmly told us to deactivate the sabers and the bridge was closed - so we headed to bed So it was tough when the alarm went off at 6.30am- no lie in @WorldTraveler34!- managed to get to breakfast & to transport to get to batuu at 8.15am.
Did a sneaky non Star Wars ToT plus LL RnRC
Quick Starbucks stop then full Star Wars mission mode

Concentrated on Saja Jedi path 1st but worked thru all the pathways. Popped back to the halcyon for the drink tasting flight at midday so had lunch on ship rather than docking bay. Straight back to batuu for the millennium falcon pathway tasks

Didnt go big time on costumes for batuu- comfort with a hint of theme. DH got into the tasks and scanning way more than I expected- he doesn’t usually touch games of any sort 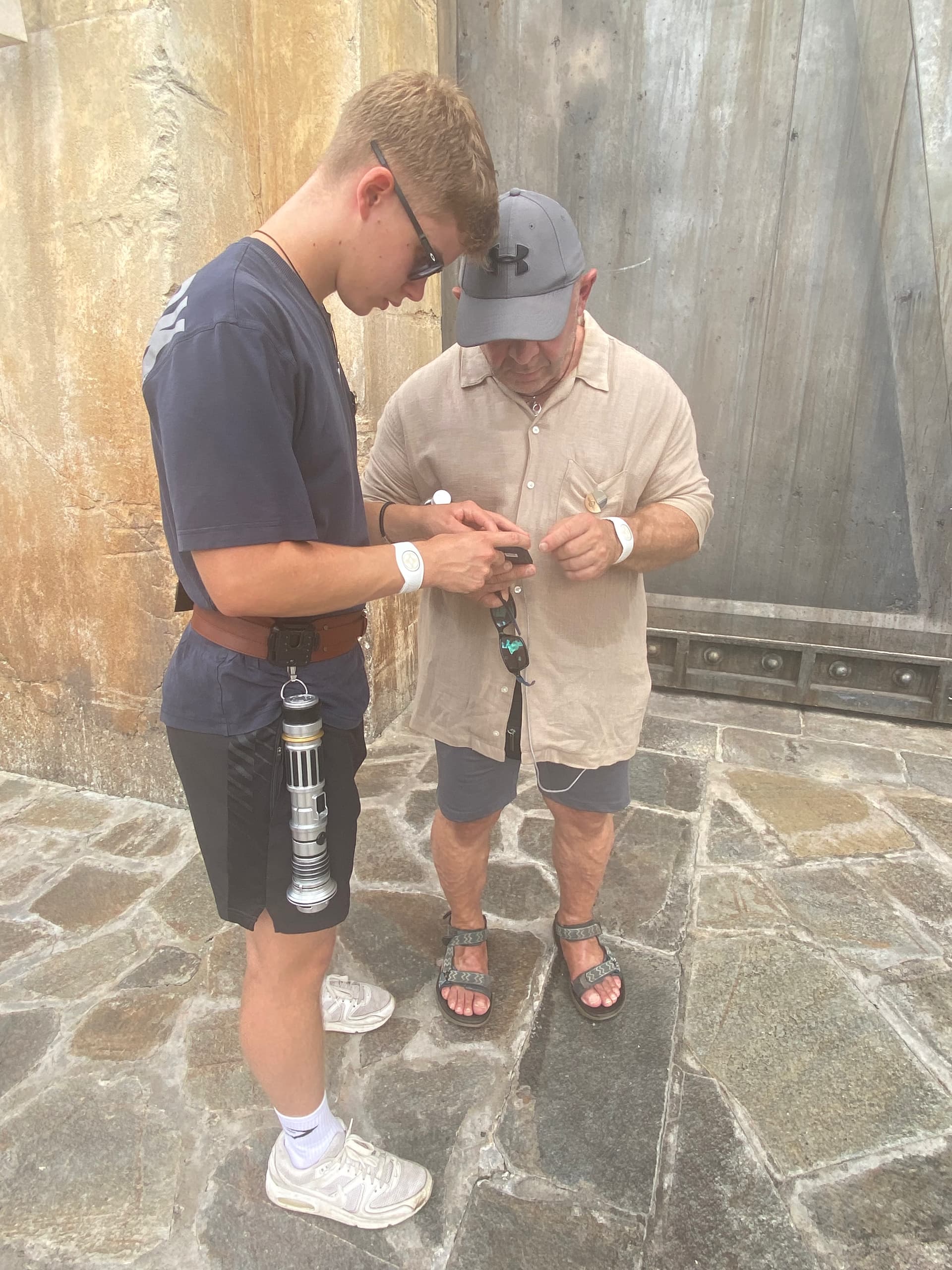 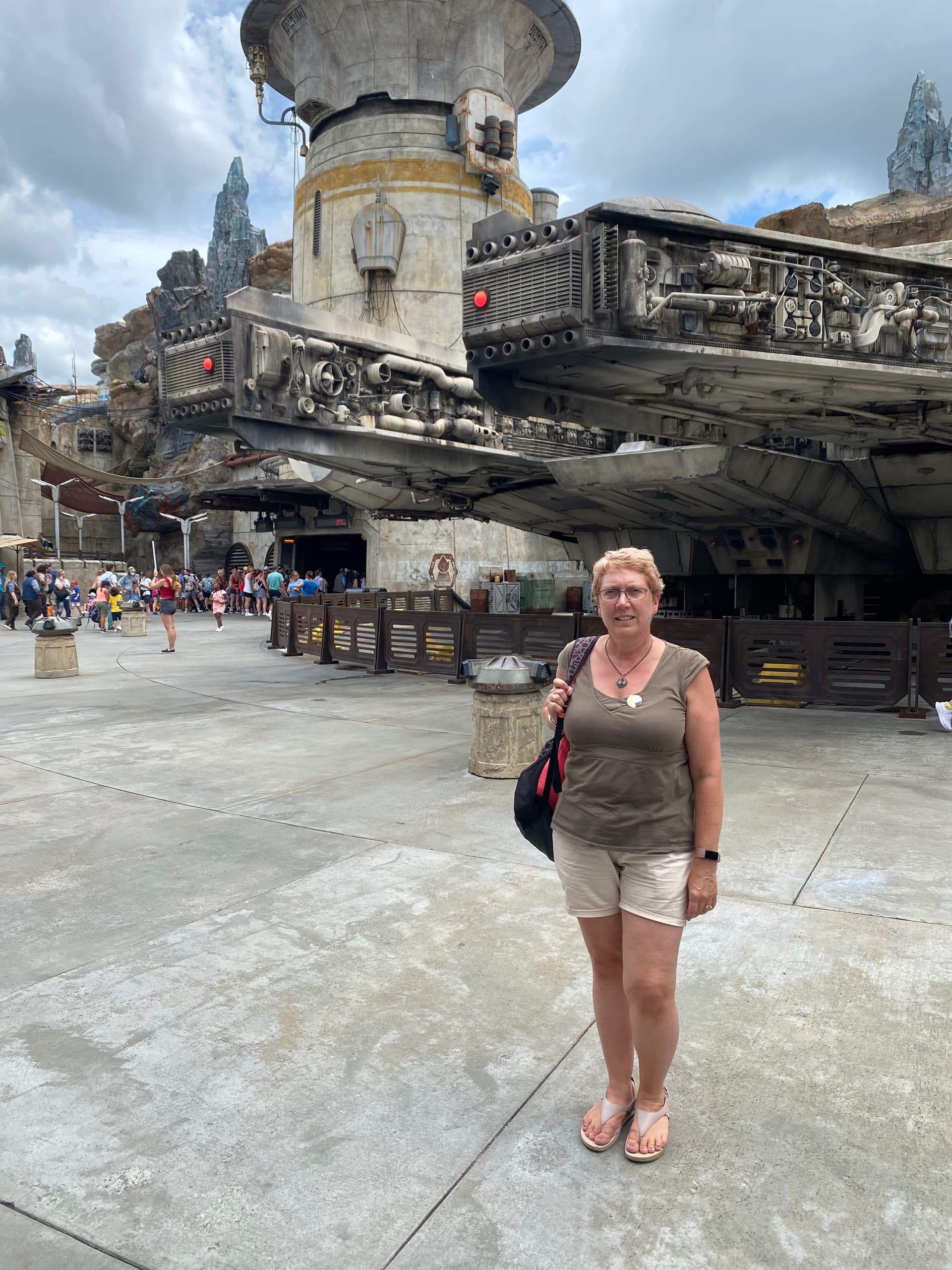 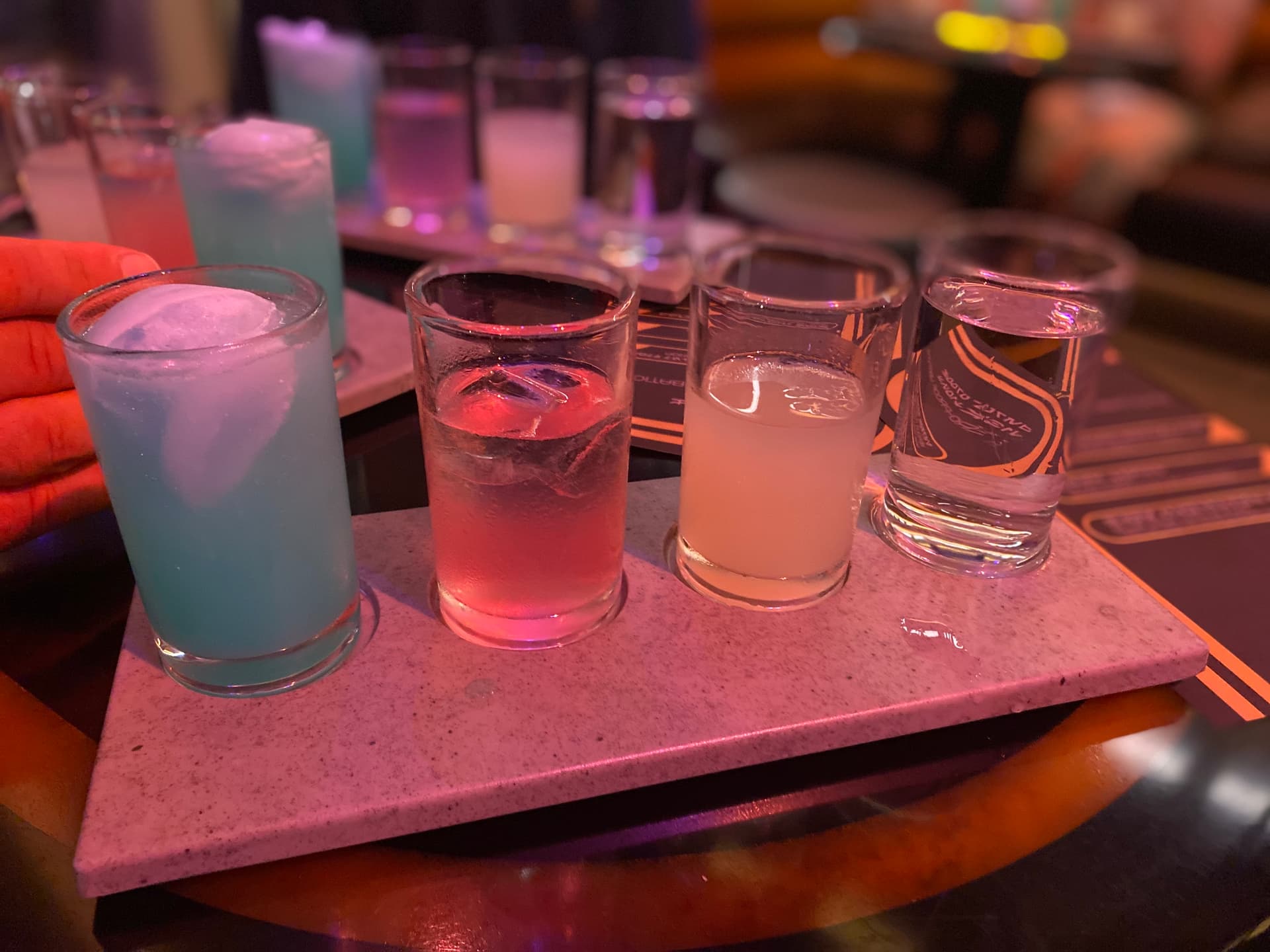 Back to ship in time for story continuation. Now we’re having a quicken freshen up and change for the evening