I take it it’s the first time you’ve been there?

I last went in 2003, when I was, well… a fair bit younger. So it’s almost like going for the first time!

Should you be feeling a little intimidated, don’t be. The enormous fellow at the door, the one built like an offensive lineman, is the maitre d’, and is quite the gentleman and not at all scary. And the servers have to be the least pretentious people connected to fine dining I’ve ever met. I expect you’ll be quite thrilled.

I mean, if they repeatedly extend a warm welcome to a degenerate local like yrs. trly., they must be saints.

And yes can’t wait to hear how it is!

hippos! just the best. have a great dinner at V&A’s!

Well, Victoria and Albert’s was, predictably, sublime. We’re back now, stuffed to the gills with the most delicious food and wine. I’ll recap the menu later, when I’m not on the verge of falling fast asleep. It was indeed as good as you all say it is. It’s just as wonderful (if not more) as any top-notch (that autocorrected to tip-bitch, wtf iphone) restaurant in New York City. And as an NYC resident, I admit I’m a slight bit of a food snob. That was an absolutely sublime meal, with impeccable service. Ahhh.

Tomorrow we’re doing morning EMH at the Magic Kingdom, and then the evening at Batuu. This has been such a lovely trip. Don’t make me go home!!!

I didn’t see an enormous fellow! Our maitre d’ was a lovely young woman from Paris… 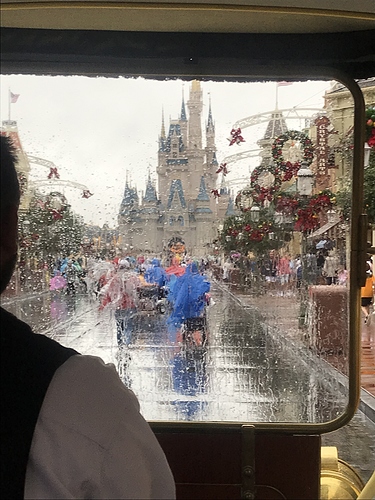 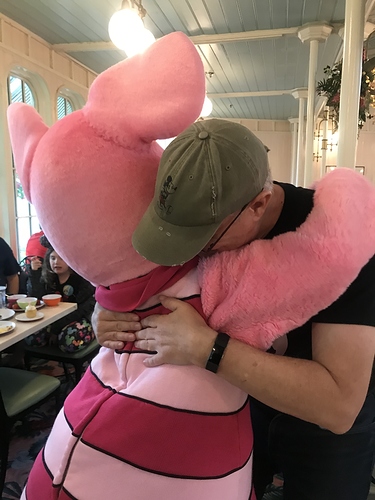 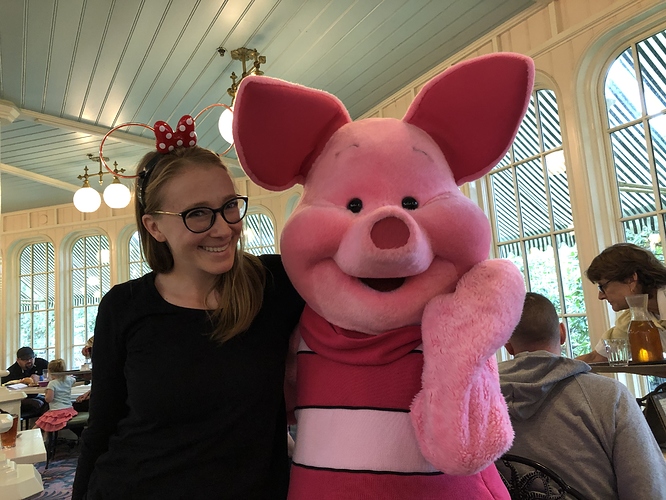 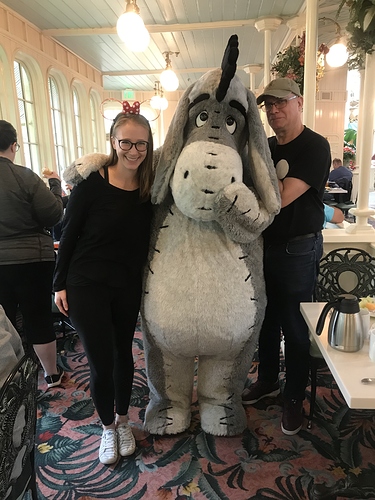 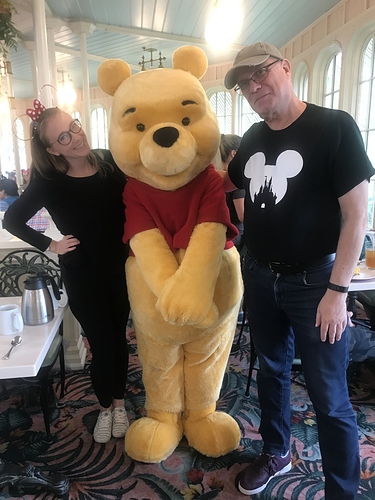 The rain never bothered us anyway

We braved some morning rain to have a leisurely morning at the Magic Kingdom. We rode the Main Street vehicles up to the castle, then rode, between 8:30 and 10:30:

Then we hiked over to brunch at the crystal palace — the food was fine, but we were there to meet Eeyore, aka DF’s spirit animal. It was preeeetty great.

Then we rode the Jingle Cruise and Splash Mountain with our anytime FPs, played another round of SOTMK (so fun!), and now we’re headed to DS to get a specific DuckTales shirt for DF.

More in a bit!

Hate to see this come to an end for ya, been fun following along

Have loved reading your adventure.

Aw thanks guys! I’m home now so I’ll do a wrap-up post… now-ish.

Well! I am back home in my cozy little NYC apartment, but we had such a good week. It was a trip almost a year in the making, and obviously, all the stuff I read and learn on this site was the #1 thing that makes a Disney trip go off without a hitch. There were a ton of times when I threw out our touring plan to do something else, but knowing what the Plan Bs (and Cs, and Ds) could be is such a huge help in zagging when everyone else is zigging.

OK where did I leave off… Friday!

Since it was still overcast as we were taking the boat back to WL, and since we were both pooped, we didn’t end up going out to DS – instead we stayed at the resort and just vegged. I went down to read by the quiet pool next to Boulder Ridge. More on WL in a bit, but can I just say – I adore this resort.

Since we really wanted our coasters, I planned for us to drive to Hollywood Studios, park, and take the Skyliner to Epcot. (Also because we really wanted to ride it.) The Skyliner was great! It’s definitely not the most direct route to go from HS to EP on it, but the views were nice, and it’s a pretty peaceful way to travel. Though they’re not joking about how fast you come in to the station. Whew!

Once we landed at Epcot, we high-tailed it over to Mouse Gear from IG, picked up our coasters, and then left through the IG. The Skyliner was mysteriously stopped, and it looked like people had been waiting a little while. We decided to skip that and just take the boat from EP back to HS. It’s not quite as smooth a ride, but I think it took about the same amount of time. Once we got into HS, we headed straight back to SWGE. We were a little behind schedule, but I only had one FP that we had to use (TSM, of course!). We waited in line for MF for about 40 minutes – and oh man, let me tell you, waiting in a line that long feels like an eternity, since we never waited in lines longer than 10 minutes for the whole rest of the trip. On this ride on the MF, I was one of the gunners, and DF was an engineer. Our pilots actually did a pretty good job, and we got two containers of coaxium (what’s the max # you can get?!). It’s a fun ride, but I’m not sure I need to run back and do it again. I’m really looking forward to ROTR though… 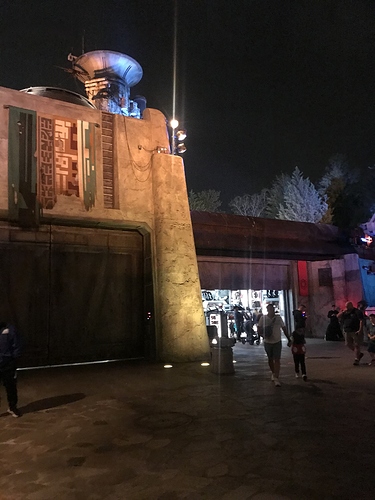 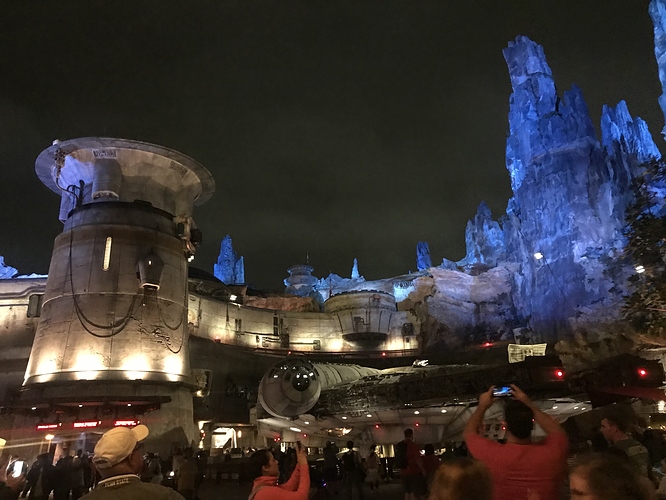 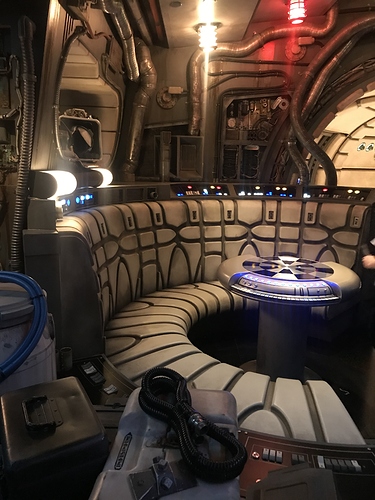 After we got off the ride, I was pretty hungry, since we hadn’t eaten since our brunch at the Crystal Palace at 10:40am. I thought maybe we could grab something at Woody’s Lunch Box, but the menu really didn’t thrill me. We had a 7:30pm FP for TSM, which is one of our favorite rides, so instead of getting food, we rode that (by then it was probably… almost 8?), and then we decided to go back to the Lodge for a late bite at Geyser Point.

And you guys. YOU. GUYS. Geyser Point is just one of the most sublime places to sit and relax in all of Disney World. It’s open air, right on the water, has a great beer and food menu, and comfy chairs. We both had the same thing we’d had the night before (DF got the crispy chicken sandwich, I got the crab cake and waffle fries, plus a Rogue Dead Guy Ale), and it was just SO pleasant. The MVMCP fireworks went off when we were there, but there was a low cloud that obstructed the view. We did enjoy the music though, and it was fun to watch the EWP go by too! We headed to our rooms around 10:20 to pack (sniffle!) and crash.

On Saturday morning, we had another few hours at the MK – we got on a boat at 8:45ish, rode a bunch of rides using our FPs (BTMRR, HM, PP, 7DMT, LM), took some really fun magic shots, and played another round of SOTMK. 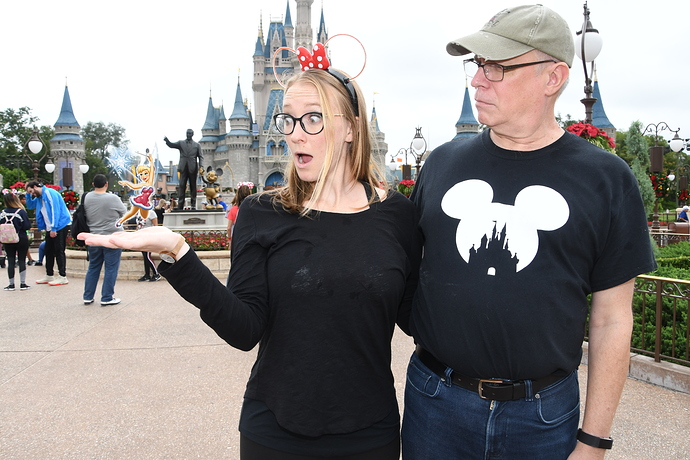 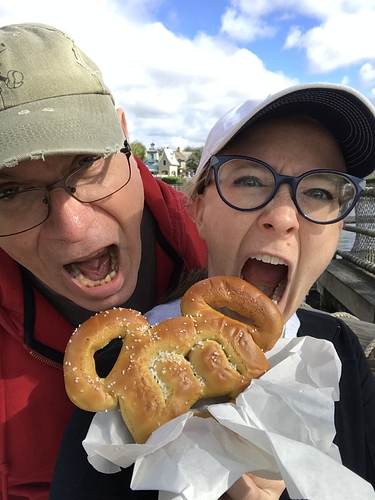 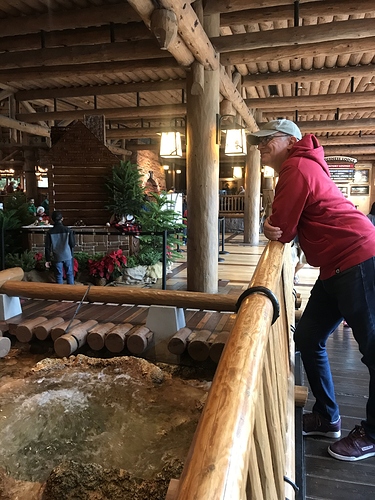 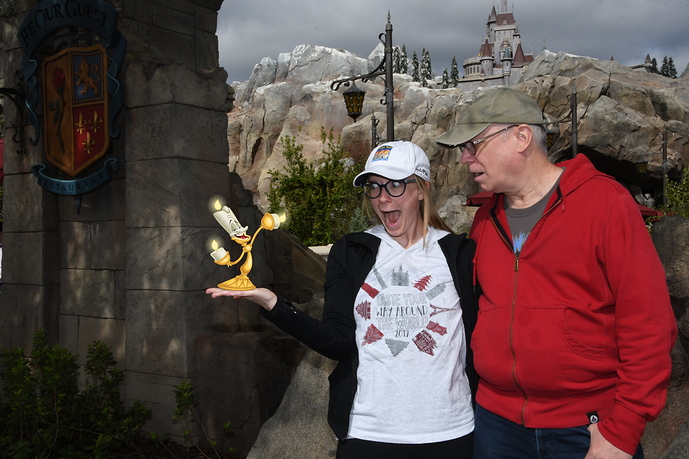 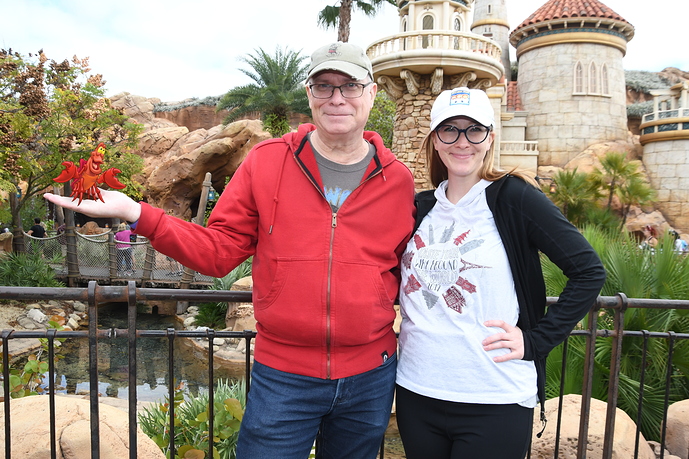 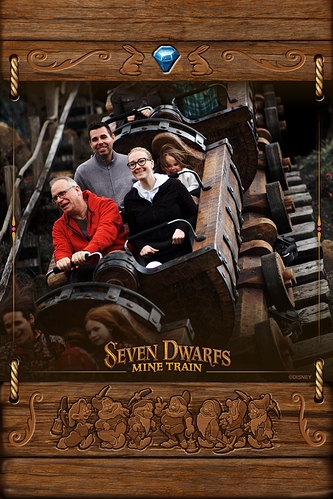 Now. For a bit of a, erm… surprise. After our DVC tour on Thursday, DF was pondering whether it made sense to join the Family… aaaand I think staying at Copper Creek was the nail in the coffin. So on Saturday, he closed on some DVC points, with CC as his home resort!! (I’m going to have soooo many questions to ask on the DVC sub-forum.) They offered the 2018 points for us to use, and found a reservation for us at the Poly to use in January, when we’re there for my birthday. (Eeeeee!!!)

After signing all the paperwork and such we had a celebratory lunch at Whispering Canyon – it was adorable, and the ketchup thing was hilarious – and then booked it to the airport. MCO was an absolute madhouse; if I hadn’t gotten lucky and gotten into a newly opened line at security, I might have missed my flight. DF had precheck and it was packed there too.

All in all, it was a super, super great trip. We did tons of amazing stuff – highlights for me were dinner at V&As, soaking in the ambiance of WL, and the Pirates & Pals cruise. I can’t say enough about how much I loved Wilderness Lodge. The lobby is awe-inspiring, the bubbling brook inside, the big boulders with the waterfall, the QS dining, the bars… the whole thing was beyond lovely. So far we’ve stayed at the GF, YC, Dolphin, and AKL, and WL is now my favorite resort. It was super easy to hop on the boat to MK, and the buses were pretty reliable; we didn’t end up sharing with the other resorts, but that might be because we were usually going at peak times. We did just miss a bus from AK to WL one day, so I just ordered an uber, rather than waiting 20 minutes for another bus. It’s definitely not any less convenient to the MK than the resorts on the monorail; if anything it’s easier, since the monorail is often either a) packed to the gills or b) on the fritz.

Phew! Here concludes my trip report. Thanks for following along, everyone! I’ll be back in 61 days for my birthday trip (and bringing my mom along!!), so maybe I’ll do the same then. Tomorrow is FP day (ack!) so I guess there’s not much time to let the Disney Fever subside before starting our next adventure…

Thank you for sharing your trip, it was wonderful!!

We waited in line for MF for about 40 minutes – and oh man, let me tell you, waiting in a line that long feels like an eternity , since we never waited in lines longer than 10 minutes for the whole rest of the trip.

We do get a bit spoiled!

It’s so true. How do people do Disney without TP?!? I love not waiting in lines.

Israel Perez, the big fellow, has always had an exceptional second-in-command. In the times I went there I met two. The first now manages the clubhouse at Golden Oak and the second Artist Point. Those ladies were more than capable of running the place and I’m sure the latest was no exception.

Saturday, he closed on some DVC points

You have now joined the ranks of dark forces who destroy all that is worthy and wholesome in the Sacred Spaces. You will bring fiscal insanity on you and ten generations of descendants.

In other words: they are in good company.

thanks for sharing your trip with us! enjoyed every bit of it… green with envy here!

and congrats to df for the dvc purchase!