Lighting Lanes — be careful what you wish for

“Why doesn’t Disney just do what Universal does and have Express Passes?”

Just spotted this on a Facebook group I follow. It’s good for only one ride per attraction. There are 12 qualifying attractions. 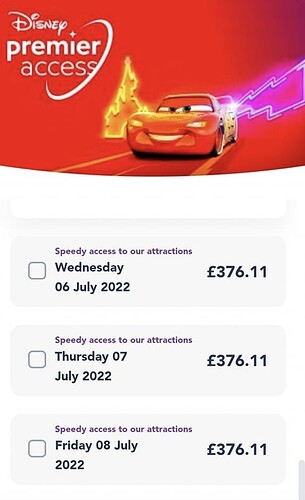 I am glad I had all six of my kids. And I’m glad to have already experienced WDW and DLR with them.
Disney had been a lot of fun, but I already don’t see it as a place with great ROI. This just makes it less appealing.

Still glad you decided to have three kids?

It’s ridiculously more expensive than UOR EP though, so I can’t imagine it’ll be warmly welcomed.

I saw this and don’t understand how it even makes sense! Can’t you buy all of these individually for cheaper?? Like most I remember being €8-12?

I had seen the report of the new DLP “Premier Access One”. It “starts” at €90 and is date based / crowd based in price.

I do want a pricing structure like this at WDW for that kind of access. €14 / $15 per person is too low of a entry price point. A majority of park visitors buy it because of this. There are too many people using the G+ system.

You know how fast the Express queues at Universal actually are. They are only used by a fraction of the park.

I’m glad that they are at least going to have a capacity of sales going forward at $15, but that just means it’s going to sell out. That, IMHO, is going to be as big a mess. Then you’ll have people arguing that they can’t even get access to buy it.

Here are the current “starting” costs for the attractions. (As of May 2022)

It seems like everything went up a couple Euros individually

Is that for DLP? Doesn’t seem possible it could be per person. Maybe for 4 people?

There are too many people using the G+ system.

This statement that I keep seeing over and over again is poor logic that disregards the awfulness of the product. If it were just about price point, FPP would have failed and it didn’t.

100% of guests had access to FPP for free (an even lower price point) and it worked far better than this monstrosity and was more well-received too. Far fewer than 100% of guests use G+ and it is failing miserably.

It is at DLP and it is per person. The “base” price for all the rides is €213 if bought individually on a “slow” day.

This is the price for all of them. Buying 12 attractions adds up quickly. You don’t think about it as much when it’s only €9 - €12 every transaction. When you see the total then everyone -

100% of guests had access to FPP for free (an even lower price point) and it worked far better than this monstrosity and was more well-received too. Far fewer than 100% of guests use G+ and it is failing miserably.

You are comparing two similar, but wholly different products. They don’t operate anything like each other even though they both are ways to manage a queue. It’s like saying McDonald’s & Burger King are the same because they both make hamburgers.

I do understand why you equate the two though.

Why oh why should we even have to consider buying rides when we’ve already paid an arm and a leg to get into the dang park?
This is singularly obtuse.
We are the fools in this equation.
From a business standpoint - sure - keep profiting as long as there are people to pay for it.

I think the idea of this pass is that you get to visit each attraction whenever you want. With regular premiere access you book a time.

It is basically the same as the Universal (one time) Express Pass.

Edit: disregard, original numbers may have been for 2 people.

I saw the original article mentioning 90EUR/pp for all rides and thought, meh. But 376 pounds works out to 440EUR/pp or about 5x as much as the base price.

Mind you, Universal Express Pass also goes up in price based in demand. Today 2-park limited is $220/pp and I’ve seen it over $300/pp.

Definitely a case of be careful what you wish for. I’ll take G+ with Liner wisdom at $15/pp rather than Premier Access for $470/pp, thanks very much.

FPP worked well for on site guests who planned ahead, but not so well for everyone else. However, it had the advantage of ALL rides, attractions, and meet and greets as part of that pool. G+ has far fewer options to guests partly because not everything has opened back up yet (almost there) AND because they took away a lot of capacity in order to create ILLS options to charge for separately. That is why G+ isn’t working. If they dropped the ILLS and made everything G+, it would be more like FPP…only, without giving the advantage to onsite guests.

I think this rumored pricing structure is exactly the kind of thing Disney should have done from the start…much more similar to every other amusement/theme park system out there. It allows those who really want and can afford it to do so, but severely limits sales as to have little to no perceivable impact on the standby waits.

Naw. Just go full on Disney Bougie and book a VIP tour and be done with it.

Oh snap, now @mousematt is going to try and crash my one day at DLP in October. Think I can buy him off with tea in his town the weekend before?

Ok, the screenshot posted in @mousematt’s Facebook group had to be for two people. I just tried to book a package on the DLP website for the same dates and was given this for one person: 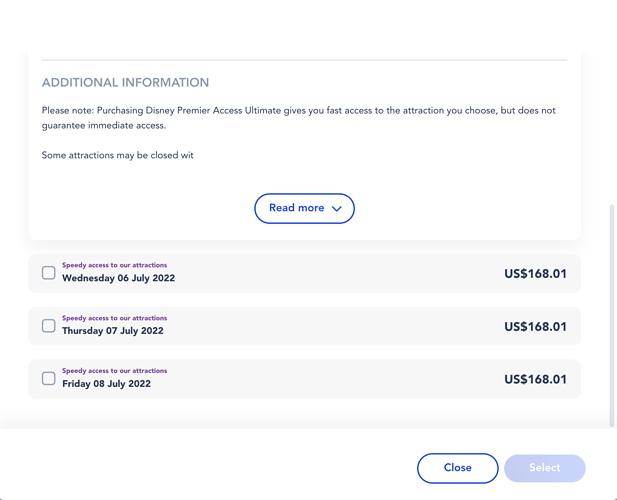 So - is the equivalent to Universal Express pass one-time worth it (for comparison, the cost for the same dates at Universal is $219).

I bet Disney ends up doing this:

So same model as Paris

Why would I want to go on your low rent trip to DLP when I’m doing my own in September.

You’re not even staying on-property.

I was thinking the same. It would be significantly cheaper at those prices per person.