This is my first attempt at a trip report. I hope it is not to long winded.
Overview: the gang included myself 56, DH turning 56 on the trip, DD28, DD26, DSil 29, DS23, DSgf20 and last but not least DGS2. This was to going to be DGS2’s first trip to Disney so we were all very excited. We visited the world 8/18- 8/25 and stayed the entire week at Coronado Springs, it would not have been my first choice but DS23 and DSil 29 had to have a gym. We were all on the regular dining plan. We had free dining then paid for the upgrade.

Day 1- Travel/Arrival Day
We woke up at 3:30 AM to leave the house by 5:00 AM and head to the airport. We were at Philadelphia airport by 6:15 AM for our 8:15 flight. I have never seen it so busy. I happened to get in the wrong line for baggage drop off and saved myself about an hour wait:wink: My DD26 and her family arrived to the airport a couple of minutes after us, and was in the “proper line” and arrived at the gate after we had already boarded. It’s crazy that 2 hours before flight is not enough time for domestic travel.
The plane was delayed taking off, I guess to many planes and we had to wait our turn for take-off.
The pilot made up the time and we only landed about 10 minutes late.

We were in the line for Magical Express at 11:15, and after about 15 minutes we were on the bus and on our way! Lucky for us, Coronado Springs was the first stop. My DS23 did online check in as did I, My DD26 did not do online check in. I did the touring plan room request fax for all 3 rooms.
DS23’s room was ready. DD26 received their room number at check in. I was told my room would not be ready until about 3pm:anguished: Oh well, I’ll store my carry- on in one of their rooms and get it when we get back from the park later. At about 1pm we picked up our refillable mugs and grabbed a quick snack, we did not want a full lunch because our ADR was for 3:50 at Mama Melrose in Hollywood studios.
We were just about to head out to the park when I received a text that our room was ready. We headed there to check the room out, as it was next to my DD26 room. All 3 rooms were next to each other, which was good. Many a time I could hear my DGS2 screaming(happy screams) through the walls and I thought to myself, “thank god it was family on both sides of him”. I had requested Casitas Bldg 4 1st floor for all 3 rooms and we received our request.

We headed to Hollywood studios at about 2pm via the Disney bus, we had fast passes for TSM that started at 2:50. The wait was not very long and before we knew it we were on our first ride of the trip. We walked around Toy story land and watched my GS2’s face light up in amazement.
We promptly headed over to Mama Melrose for an early dinner, we did the Fantasmic dining package.
Diner was good, we were all starved.
Side note: One thing I did notice, early in the trip Disney staff was much more attentive than later in the trip. For instance, my DH’s birthday was on 8/22, the first couple of days every restaurant gave him some type of cupcake or dessert with a candle for his birthday. Later in the trip there was nothing. On his actual birthday I had to remind the wait staff that I had pre-ordered a Mickey cake. They had no record of it but came out with one and did not charge me for it. For my DD28 who has a dairy allergy, for the first couple of days the wait staff would be very attentive to her, they would already know of the allergy and have the chef come out to talk to her. After the first couple of days, she would have to ask the wait staff on her own.
Our FP #2 was for ST, DD26 and her family did not do it but watched a show instead.
FP #3 was for RRC, DH watched DGS2 while we rode. DD28, DS23 and DSgf20 were all tired and headed back to the hotel. 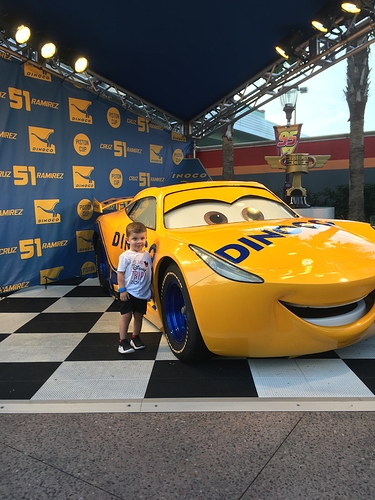 IMG_4580.JPG3024×4032 2.83 MB
DD26 and family, DH and myself headed over to Lighting McQueen racing academy. My DGS2 just loved it.
After that we headed over to Echo lake and had funnel cake with ice cream and strawberries, best snack of the trip! It was now time to head over for Fantasmic. It was a little “iffy” weather wise, with lots of lightning in the distance, but we lucked out. We left immediately after the show, we did not stay for the fireworks. With the thousands of people that were exiting the same time I decided to arrange for a “Minnie van” to pick us up. I did this before I started even walking, and it said pick-up in 15 minutes, perfect! Well, the time kept changing, first pick up at 9:45, then it kept adding 5 minutes. It wasn’t until after 10:15 that we got picked up. Once were in the car we understood why. The driver was slower than slow. Under the speed limit at all times. I think it took 10 minutes just to leave the parking lot:weary: We have been up since 3:30, we just wanted to go back and sleep!
14 Likes
missoverexcited August 28, 2019, 7:46pm #2

To make sure we arrived for our 7:50 am ADR at Ohana we took two Minnie vans, one would not accommodate all of us. This time things went much more smoothly and we had a good experience with the driver. Breakfast was very good, and we had a nice table overlooking bay lake. This was our DGS2 first experience with characters up close, at first he was fine from a distance, but don’t come close! By the end of the meal he was getting the hang of it and was smiling for pictures. 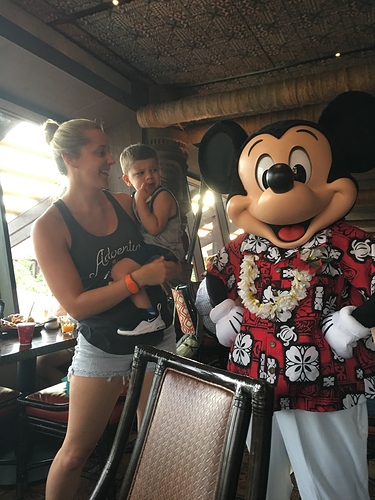 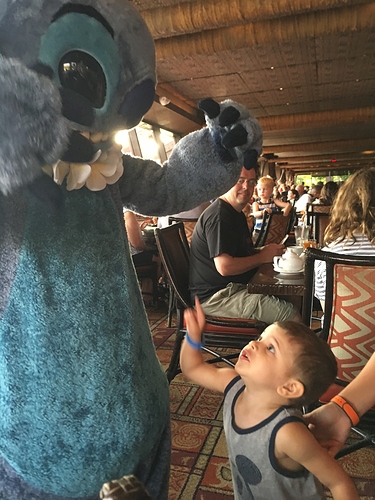 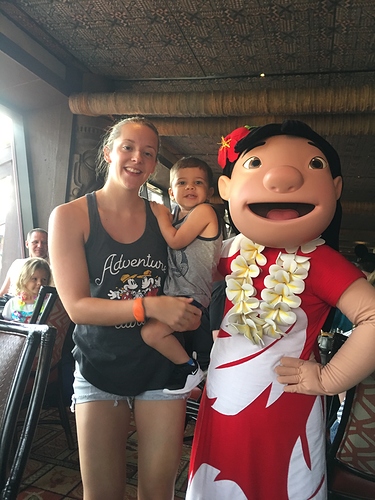 IMG_4596.JPG3024×4032 2.36 MB
We hopped on the Monorail at the Polynesian and was at the Magic Kingdom at 9am.
I had planned on a family picture in front of the Castle with matching TShirts. My DS23 and DSil29 would only put it on for the picture, but at least they did that. 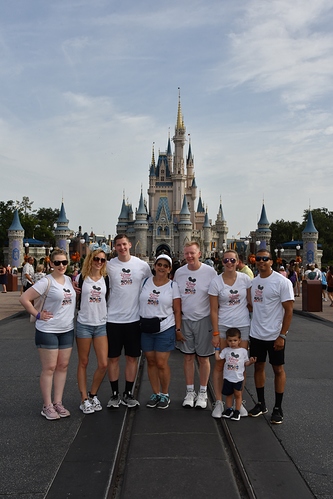 Epcot- we had ADR’s for LeCellier for 5:05 party of 5 and 5:10 party of 3, when making the ADR they will not accommodate larger than a party of 6 on the phone. We wanted to be at Epcot by 4:30 to account for the walk so we were at the bus stop somewhere between 3:30 and 4:00. We made it in time. They even put us at two tables next to each other at the same time so we were all together.
Dinner was very good, they mentioned that we could do soup or salad instead of desert. I have been wanting to try the Cheddar soup so I jumped at that chance. You can always use a snack credit for desert elsewhere. After diner we toured some of the countries, did the Mexico ride. I was waiting for Illuminations to start, when all my family wanted to leave, and did so in dribs and drabs. Finally my DH pleaded with me to leave “before the mad crowds”, “we will see it on Saturday night I promise”.
So off to the resort we went, without seeing Illuminations.

Oh, I hope you got to see Illuminations on Saturday???