So I was just checking my TP for updates and suddenly KS is not open until 9. I’m at AK park in October with park opening time of 8AM and EMH at 7AM. Now my once awesome plan is all wonky! What gives?

If I’m not mistaken 9a is a standard opening time for safari on account of animal care needs earluin the morning.

That’s fine if it’s true, but TP was def showing it opening at 7 at least up until 27AUG, which was the last time I evaluated before today. I had us getting on about 7:35AM.

I know someone flagged it to TP because it is not opening until 9. The earlier time was creating plans that could not be followed.

Well I am glad I found it/ it’s fixed now while I still have time to make corrections. Thanks for the info!

Just came across this, and I must say “WTF???” This has really screwed up my AK morning. I had planned to RD Navi then Safari (which TP had listed as opening early), and then back to FOP for 8:30 FP. I guess I shouldn’t rely on TP after all. I feel like such a newb…

Before I “evaluate” again, I took a screenshot. Last evaluated a month ago…

I am posting screen shots of the chat thread: 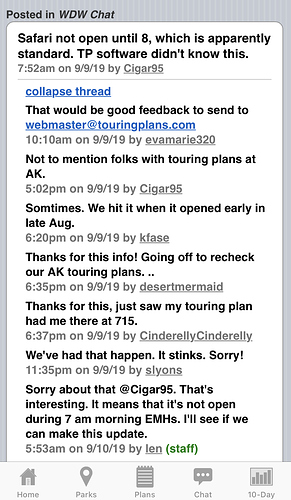 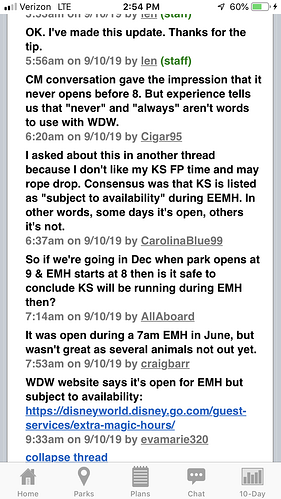 To add to this, this is the info included in the bottom link in the thread: 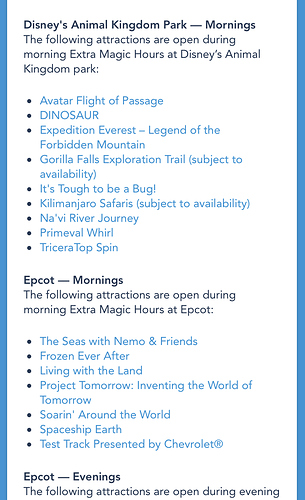 So, I guess the issue is with Disney, not TP?

So, I guess the issue is with Disney, not TP?

Yeah I don’t really have a problem with TP - they offer an amazing service that is unmatched in quality and breadth. Just venting my frustration…

I have found a few other instances since this one where TP is different than what Disney has listed, including Gorilla Falls and Mickey and Minnie M&G.

My touring plan is all jacked up now. Hopefully this becomes more clear closer to my visit, but if I need to change my fast passes I’d rather know now…

I just moved KS to the evening by modifying my EE fastpass to KS. I realized I’m the only one who wants to ride EE anyways, so I’ll just do the single rider line at some point during the day. And now we’ll ride KS around sunset, so maybe this was better in the first place.

I’ve been considering the exact same thing, but I had been attempting to prevent criss-crossing the park all day by doing a section at a time. I’m not sure I’ll be able to rework it all to fit now…

Yeah thats the only problem with my new plan. Now, after a mid-day break, were doing Nemo, Boneyard, dinner at Flame Tree, then over to KS, then back to ROL (if the kids are up for it). We will have to walk at a pretty fast clip to make it back to ROL. We might just skip it, but were paying for the VIP package at lunch, so I’d rather not waste the chance to see it without waiting much for it.

I think I may have worked it out. Wasn’t as hard as I thought it would be, but I don’t like it as much as my original plan. I did modify our EE to KS @ 4:05. We’ll just rope drop EE.

Yes, don’t skip ROL if you’re paying for a package!

Are going to have strollers for all 3 kids (like a double and a single)? If so, I think you and your wife will be able to move pretty quickly through the parks even if you are criss-crossing. When we needed to move from one end of a park to another, my wife and I put the kids in the strollers and were able to move quickly. For the parts where DD3 walked, it took forever to go short distances. [As an aside, I highly recommend strollers for all 3.]

strollers for all 3 kids (like a double and a single)

Yeah we’re renting a double there, but bringing a single umbrella. It will also be useful at the airport for DD1