What was your first car? Did you buy it yourself? Used or new?

And/or, what were your kid’s/kids’ first cars?

I’ll start: my first car was used, bought for $75 not long after I got out of boot camp. I don’t think I’ve ever owned a brand new car. One had only about 500 miles on it.

Our kids’ first cars, all bought when they were in high school: except DS in jr high bought a 1956 Chevy for $50 that he rebuilt the engine and then painted the car black in the parts that had been pinkish. Due to moving a couple of times, he bought his first car to drive daily, a 1965 Ford, used ? price. DD1 bought a 1967 Buick Skylark I think, used, ? price. She rebuilt that engine. DD2 bought an Opal for I think $60. Her brother gave her used front seats for her birthday. She also overhauled the engine.

My first car was a 1971 Barracuda, paid $500 for it (used). Lived on Oahu, at the time, and I was annoyed that the interstate was only 5 minutes long… total waste of horsepower.

My parents paid for half of my first and they picked it out. A friend of Dad’s at his work was selling the car that they’d kept up nice for their daughter my age but she insisted on a pick-up. It was a '76 Volare in a Red-Orange. This was in '86. Basically they took a 4-door family car of the time and added a monster engine in it. Sounds good but the engine kept blowing out the other parts. If you look at a list of All-Time lemons, it is usually around #3. It was always in the shop. The only good part was that since it was steel, it was totaled out about three times so that somewhat paid for the repairs. I worked at the baseball stadium and it was always easy to find in the lot.

Thinking about this. That Volare was ancient. Only about half the kids had a car, so no one looked down on me because of its age like at some schools.
But, that made me think about what is in the driveway. Our New, Nice car is a 2013 Touring Cadillac. That is 9 years old and I still think of it as new. There is also the only car I ever bought new a 2000 Cruiser that we keep around as a spare. Then there is DH’s pickup that is older than that. Except for the cruiser, we get envious looks (from different people). I guess that is because cars last longer now.

My dad is a mechanic so he has supplied the family with good used cars forever lol. My first was a cute white Volvo that had to have brakes replaced constantly. When I started UWF and would be driving more he got me a wonderful used Honda Civic that went overseas with dh and I.
My oldest got our Dodge when we upgraded to a van, second son got an old Buick from my Dad and the two youngest are about to inherit that when second son gets a new one.
Right now I have a 2017 Buick Enclave that the owners towed behind their camper and it has 12,000 miles. I absolutely love it.

My first car was a 2001 Ford Focus ZX3. Technically, my dad bought it because he signed all the paperwork and got the financing, but I was making the payments every month. It was new because my parents wouldn’t allow me to buy a used car. My kids are 14 and almost 7 so not driving yet. DS (14) has autism (high functioning), so I don’t know if he’ll be driving at 16 yet. He doesn’t have any interest now.

Twinsies. Mine was a 2008 Ford Focus Zetec. I paid cash for it. I was a proper grown-up at the time. 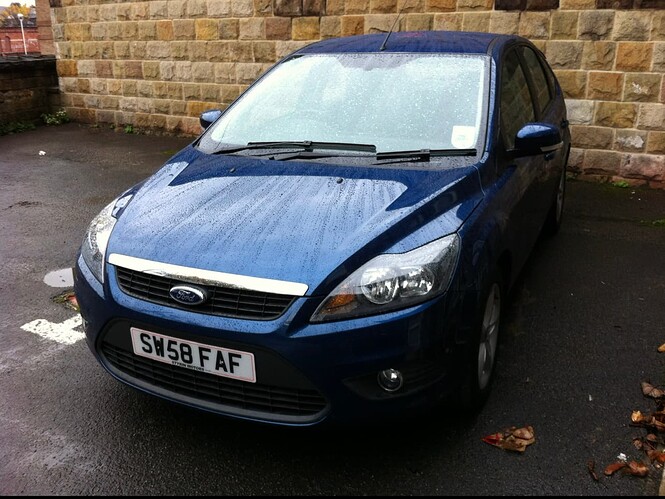 My first car was a 1990 Nissan Sentra, brand new when I turned 16 that year. It cost about 8K and I paid for half of it.
My kids’ first car was my Mom’s Honda Accord, forget the year but not more than 8-9 years old. It was given to them. DD20 drove it for 2 years, then DS18 got his license and they shared it…until he wrecked it when he was 16. He then had to pay for half of whatever car he got to teach him a little bit about responsibility and taking care of things (the wreck was his fault). He chose a convertible Ford Mustang (used) and has taken stellar care of it since. Avery then needed a car as well, she got a 2006 Ford C-max hybrid. Perfect for these times of high gas prices.

How do you get this thing out of second gear . . .

Nice! I loved mine. I kept it until I had DS and then we needed something else because it was really hard to fit a car seat in the back.

My first car was a Vauxhall Astra.
I paid £400 for it.
Very much used

I leased a 1997 Chevy Cavalier before my final year of university. My parents co-signed but I made all of the payments.

My first was a cute white Volvo that had to have brakes replaced constantly.

Those brakes were confusing to mechanics. My parents took their Volvo in several times for brake work including having them completely replaced. This would have been mid-80’s. They would be fine leaving the shop and then would do this horrible squeal at stop lights. The Midas place was giving them the brush off. So, Dad printed these little signs not much bigger than a business card that said “Brakes by Midas.” People would glare at us at stoplights because of the noise. Then they’d see the sign and understand. At the Midas shop when the guy saw the signs he got upset and said, “You didn’t have to do that!” Dad said, “Look at how often I’ve been in.” Shockingly the brakes were always fine after that.

This is so great.

My first car was a 1999 Honda Accord that my dad had been driving until he upgraded to a Lexus. I bought it from him when I graduated from college. Before that I drove his old Pontiac Grand Prix in high school.

Did you get the Lexus?

No, he started leasing at that point so he turns it in every few years for an upgrade. Horrible.

(I buy sensible cars. Right now I have a Hyundai Tucson.)

gee, dad. Tho, if it’s a Lexus sedan they’re not great kid cars.