Is it likely (in early December) to be able to ride Toy Story first thing in HS, then dash over to get signed up for Jedi Training?

I wouln’t recommend that. I would FPP TSMM for later and head over to JTA first thing in the AM

definitely go sign up first! that line up is crazy! 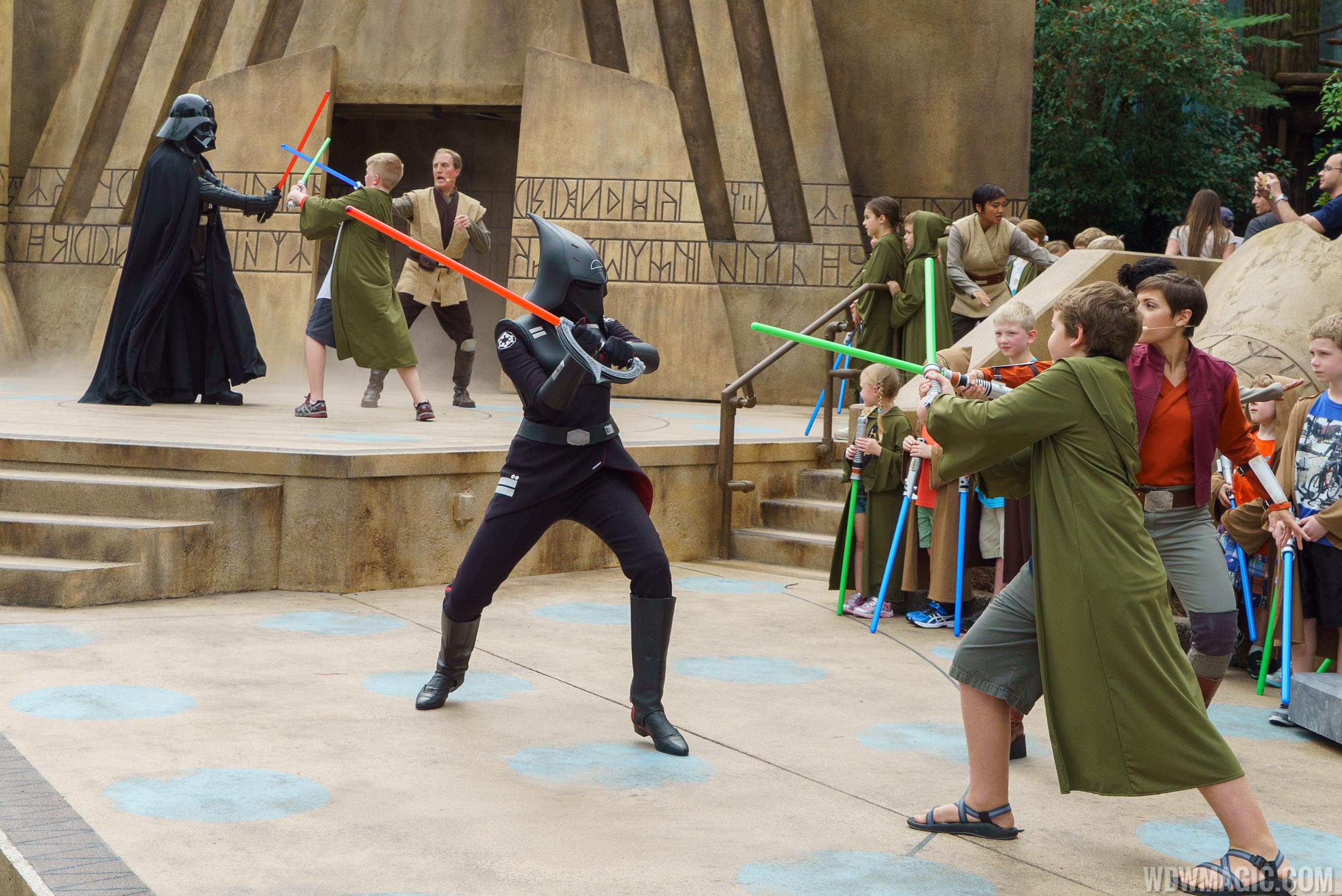 An update to the Jedi Training Academy is coming later this year at Disney's Hollywood Studios.

Great tip…I wasn’t aware it was closing and reopening until you posted. Thanks!

We were just in HS two weeks ago and got to the JTA sign up at 9:15 (park open at 9A). Not only were all the spots gone but we were 31st on the alternate list. We later found out they will let people in early to the park (830 I think) that are planning on signing up for JTA. So get there as early as you can to sign up! It is possible there will be new procedures for the new show but better safe than sorry. Good Luck!

We arrived to the park at 8:30 last week - there was already a huge line! It took an hour before we got to the front, but there were many afternoon spots left. It was a predicted crowd level 4 that day, but an actual crowd level 9!

Interesting - any ideas why the predictions were so off for a few days that week??

Same experience last week that JTA line opened early. Had been told by a friend there 2 weeks earlier that a CM would come out at 8:30 with a sign for JTA so be there early. We were there at 8:15. No CM with a sign but at 8:30 they started letting everyone into the park. Signs directing JTA to a spot in front of Prime Time Cafe. People in the park early for breakfast had already lined up. We were signed up (for noon) and had already ridden Star Tours by 8:55. I am guessing most of the 8:30 people not lining up for JTA were heading to Toy Story.

Do you know how early they normally open the JTA line? I’m wondering if I would be able to get a JTA spot before an 8:10 breakfast ADR?

My experience was different than my friends two weeks earlier. For her the whole line started at 8:30 with a CM at the gate. No breakfast entries in line first. They got into the first JTA of the day. We were in line at 8:33, three minutes after being allowed through the gate and the earliest we could have gotten was 11:30. It was clear when we got to the line that those breakfast entires had been allowed to line up first. I am not sure they actually got to sign up before 8:30 though, just got in line. If it fluctuates based on CMs working Im not sure I’d try to second guess and count on doing anything around the same time. It was a MUST do event though for my boys so I wasn’t willing to risk not making it.

There is a whole thread discussing the crowd level issues in September and where the predictors might have gone wrong on some days. Not sure that any real conclusions have been reached.Check this out:

I've been watching with lively interest this year's September crowds. We are planning our 5th trip next September and we were planning it early in the month to take advantage of the low crowds. Please understand that I am completely fine using TP to manage the higher crowds, so I'm not particularly worried; but I am curious about this year's crowds and whether people think it's an anomaly or the new reality. I know consumer confidence has been measured as higher by some groups, but it ha…

@egkleinmann There is no way that you will be able to sign up before an 8:10 reservation. The line starts early, but the actual sign ups won’t start until 8:45 at the earliest.You might be able to get a quick jump on the line if you eat fast, but it will be tight, IMO.

Any new information on this since JTA has been going now for a week again? I had heard a rumor that signups were let in along with the ADR crowd- around 8 am? Anyone else experience this? I heard it 2 places now in the past 24 hours. We’ll be there in about a week- and would love to know what the process is. Thanks!

kfast entires had been allowed to line up first. I am not sure they actually got to sign up before 8:30 though, just got in