Hello! We are making our first trip to WDW on April 19-24, 2021 and are wondering what the traffic will be like when traveling via our car from a friend’s home in Winter Garden to WDW. We plan to leave by 6:00 AM Monday the 19th and need to be at Disney’s Caribbean Beach Resort by 7:30 AM to accept my rented scooter and drop our luggage at bell services. Will this allow us enough time?
Thank you!
Nesie5

I used to drive from Winter Springs and Longwood to WDW and I4 can be a parking lot at times but that was several years ago. Sometimes the trip would take 30 min other times 90 min.

You can plug in a departure time to Google Maps and it will provide a range of times: 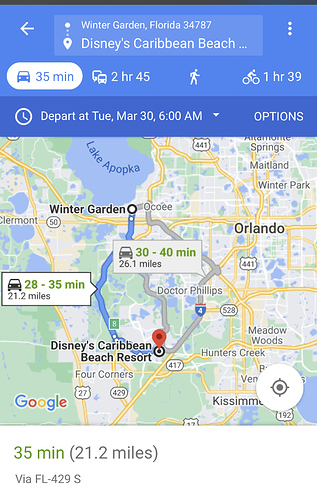 P.S. that is probably early enough to beat most traffic, but avoiding I-4 is probably wise because it is so volatile.

I-4 between Tampa and Orlando was named the deadliest corridor.

Having traveled and driven in many strange cities I would say Orlando area is average. Utah drivers are the WORST!!! What I see here in FL are a lot of too fast or too slow. Be a defensive, aware driver and you’ll be fine.

How is traffic now? I drive Boston traffic so Orlando never seems bad but we still have not reached pre-pandemic levels of traffic here.

I think Boston is easier than Orlando to drive.

Did you edit the title to ask a different question? You can definitely take ECVs on buses and monorail. Not sure about Skyliner. Does your ECV fold up or come apart to fit in a car boot? If so you might be able to use Lyft but I wouldn’t swear to it.

Skyliner can take an ECV. The seats fold up to make room if necessary.

I think Boston is easier than Orlando to drive.

Have to agree to disagree here. I have never understood what makes Orlando difficult to drive in. It’s all labeled, laned highways.

Second question getting from Winter Garden to CBR in the morning. Leaving at 6 AM should give you more than enough time to get there by 7:30 AM. The trip should take at most 45 minutes. I would agree on skipping I-4, too much traffic.

Florida SR 429 is the way to go. It runs from Winter Garden down past the Western Side of WDW. It is a toll road but you will have to use the Florida Turnpike (toll road as well) to get to I-4.

Just get off at Western Way, take a left on Buena Vista Drive for the CBR.

I remember people telling me about LA traffic. Then it was “oh, you drive 60 miles a day in Boston- never mind.”

I have had some horrendous traffic experiences in LA traffic, but my worst ever was in Boston.

I was on a tour bus as a teenager heading from the airport to our hotel. The driver told us the drive could be anywhere from 30 minutes to 4 hours depending on traffic.

I had to go to the bathroom when I was on the plane but since we were in a hurry I waited till we got on the bus, which had a stall. However, one other kid used it and accidentally locked the bathroom door shut from the outside. The only key was on the driver’s keyring in the ignition.

I wanted to choke that kid.

The drive ended up being not 4 hours but at least 1 and I think it was actually like 1.5. We were inching along the freeway, sometimes stopped for long stretches. My bladder was probably dangerously close to bursting. I was considering all my options.

We finally arrived at the hotel and I ran out of the bus as soon as it stopped, not waiting for permission from the chaperones or anything. To this day, those few minutes are what I judge “relief” by.

Thanks so much! Excellent info!

Thanks so much! Excellent info!

LOL I flew from Newark to Nashville for school with a stop in Greensville. I figured I would go during my stop over in Greensville but the bathroom was being cleaned so I figured I go on the plane from Greenville to Nashville. No big deal what kind of plane doesn’t have a bathroom? Answer the kind that flies from Greenville to Nashville 2 hour flight. Once in Nashville I ran for the bathroom. The guy next to me was the guy across from me on the plane we were both like what kind of a plane does not have a bathroom.