Is there a gringot's tour like the forbidden journey castle tour?

We will be spending a day touring both Harry Potter lands next week. We will have Universal Express. I’ve modified the Harry Potter one-day touring plans to do Ollivander’s first, based on discussions in this forum. That would put us riding Gringott’s around 8:30. Will the standby queue by too long by that time? Is there a ‘gringott’s tour’ that we could use to see the queue area. (I’ve read that there is a ‘castle tour’ you can take on Forbidden journey that allows this, so I’m wondering if Gringott’s has something similar.)

I don’t think so, but they did let me in to see the banking hall so I could take photos. That’s pretty much all there is to see anyway. It’s pretty impressive. 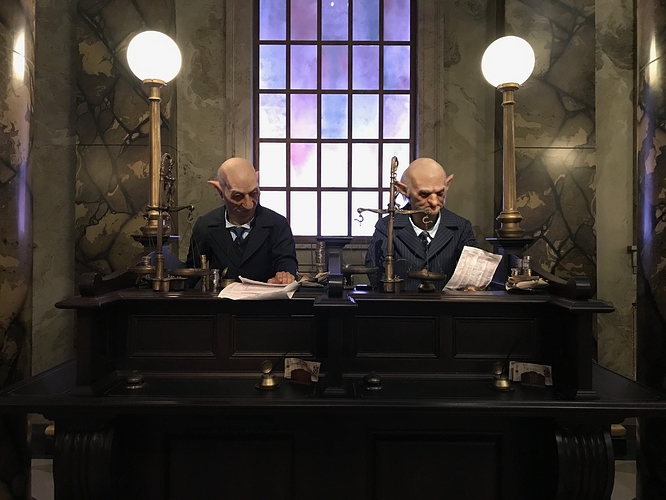 There is no tour line, nor is one needed. I have done Gringotts both with and without EP and you don’t miss anything by going in the EP line. You may want to walk slowly through the bank lobby to take it all in, but from what I have seen, no part of the line is entirely cut out by using EP, unlike in Forbidden Journey. One time, they didn’t have anyone taking pictures in the EP line, so we just asked to jump into the regular line for a picture, got the picture taken and then jumped back out into the EP line.