that Illuminations is ending. I was driving into work, listening to the soundtrack, as one does. At the sound of the first drumbeat, I knew instantly what song it was and cranked up the sound. Then, when it got to the crescendo when the countries begin to light up, I put the sound up to the max. At the point when America lights up, I got chills. It is such a great show. And I’m really going to miss it. Is it unreasonable to fly down tomorrow and back on Sunday just to see it one last time? I mentioned it to DH a couple of weeks ago (for probably the 4th time), I don’t think he thinks I’m serious.

Was Illuminations playing in 1995?

If not, then I’ve never seen it. We did catch PART of whatever the show was during our Honeymoon (1995), although we kind of walked and watched.

I guess it will be a case of not missing it because we never saw it.

What I find odd, however, is this “intermediate” show they are doing, “Epcot Forever.” Why? Why not just keep Illuminations in place until they are ready with the NEW permanent show? Seems odd.

Was Illuminations playing in 1995?

I’m really going to miss it too. Not sure how many times I’ve seen it, but I know the whole thing by heart. So many memories. Whatever they replace it with will have some seriously big shoes to fill… 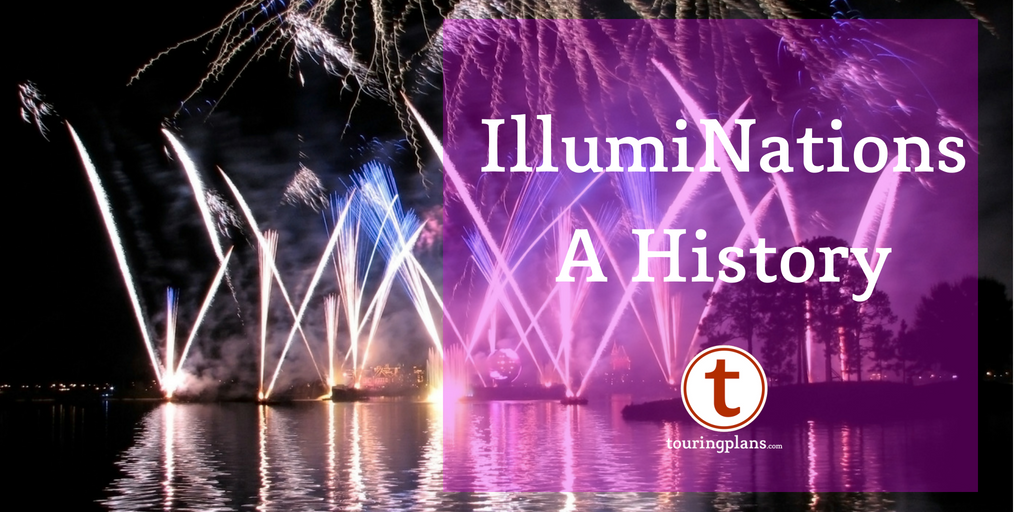 Share This!Arguably, no one does nighttime spectacles better than Disney. IllumiNations: Reflections of Earth, Epcot’s nighttime show for nearly two

Interesting history of it. I remember in 1990 seeing, what I thought, was Illuminations. Though looking back I now recognize that there was a lot less laser-play with Illuminations than what I saw in 1990. Shoulda been a tip off, but it wasn’t as the shows were pretty similar. Including the globe and the torches being there (I guess they were taken out for the other iterations of the shows and returned for RoE?)

Completely off track thought–
Heh, I feel bad for my Dad though, he was “tasked” with filming Laserphonic Fantasy. But the camera only had a monochrome view finder and you had to close one eye to see it. So he never saw any of the show in color until he saw it on VHS, which captured…about…20% of the color (it was a crappy camera)?

Honestly, all I remember seeing was some laser-projections on Spaceship Earth to make it look like a spinning globe. Apart from that, I have no memory of it.

I’m sure I’ll rectify all the nighttime shows I’ve missed for our December 2020 trip. But the May 2020 trip? I’m not sure if we’ll do any nighttime shows or not. By December, it should be the NEWEST EPCOT show, which means we’ll likely never see EPCOT Forever.

Actually, I think the one comment is right on the article. It was Illuminations I saw and the article has its dates mixed up.

Watching the video of “Laserphonic Fantasy” that they have linked doesn’t match what I remember almost at all. And I 100% remember the globe because it was half blocked by trees and I remember being very annoyed by that, which had a large impact in my planning in 2016 on how to approach viewing the show.

and the article has its dates mixed up.

If the globe came when it switched to illuminations, it was definitely before 1996. I definitely saw the globe and the last time I went as a kid was 91 or 92 at the latest.

What I find odd, however, is this “intermediate” show they are doing, “Epcot Forever.” Why? Why not just keep Illuminations in place until they are ready with the NEW permanent show? Seems odd.

They went back and forwards with this.

In the end, the state of the infrastructure used for Illuminations was seemingly the deciding factor. They are on their last legs and wouldn’t last; over the last couple of years there have been numerous times when certain effects didn’t work, even part of the globe not working.

And the torches around WS are in a bad way too, or the pipe work is.

The intermediate show may not even be shown for a year, the plan is to start the new one as soon as it’s possible. Which is a shame, I would love to see Epcot Forever, rather than another HEA in Epcot.

I definitely saw the globe and the last time I went as a kid was 91 or 92 at the latest.

This. My family and I were there in February 1991 and we saw a show that was definitively called Illuminations. I know this because it was sponsored by GE (as was Horizons RIP) and my mother worked for GE. We sat in Canada and watched it.

Don’t know how reliable this source is but:

Interesting history of it

Maybe I’m the only one, but the first thing that came to mind when watching the Laserphonic Fantasy video was A Clockwork Orange. Synthesizers, classical music, it was all there. Only needed Malcolm McDowell in a codpiece.

It’s got a nicer ring to it than “Epcot Temporary”

I think there is a sub-title:

Epcot Forever - Brought to you by Horizons, World of Motion, Kitchen Cabaret, …

Pretty sure the sound-track will use quite a lot of the old music.

It’s kind of like “Goodbye EPCOT forever” (and welcome to the new version).

I knew I liked you! Flights are like $500 round trip x 2 because - husband. and there are no dvc rooms open. but I’m not discouraged. I may whine and cry about it enough that DH will take me just to shut me up!

I’m still sad about the Electrical Parade. Anyone else?