Ugh. Because of course, i booked a last minute cruise for the first week of June.

You’ve got time to watch, it’s too soon to know 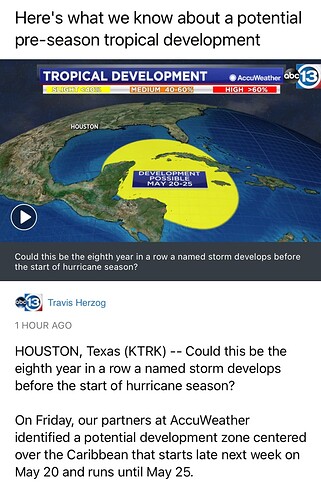 Here's what we know about a potential pre-season tropical development

Could this be the eighth year in a row a named storm develops before the start of hurricane season?

NHC is monitoring a system of disorganized showers and thunderstorms over the Gulf of Mexico that has a 10% chance of development within the next 48 hours, according to a 2 p.m. report.

“Surface pressures remain high and environmental conditions do not appear favorable for significant development before this system moves inland over the central Gulf Coast in a day or so,” NHC specialist Philippe Papin said. “Regardless of development, the system could produce heavy rainfall and gusty winds over portions of the central Gulf Coast from southeastern Louisiana to the western Florida Panhandle.” Hurricane season officially starts on June 1. The 2022 hurricane season is expected to be a busy one, according to the meteorological team at Colorado State University. Its forecast released in April called for an above-average year with 19 named storms this season — five more than what the National Oceanic and Atmospheric Administration considers average, based on data collected from 1991 to 2020.