How to compensate for loss of Tom Sawyer Island?

My son has ADHD and some crowd anxieties, and TSI was a key part of my strategy to manage that. I’d planned a long (80 minute) visit in the late morning to give him some unstructured play time as a break from standing in lines and being “on the clock”, so to speak.

The steamboat is also down during our visit, which was going to be another break from crowds and lines.

Anyone else have kids with similar challenges and have suggestions? If the crowds are getting to us, where else can we go for some unstructured movement? (Sitting down in a dark ride really isn’t a substitute for gross motor exercise…)

What age are you talking?

There is the play area at Dumbo. There is another play area near Splash Mountain.

Dammit, another one !!! Way too many things closing this fall !!!

Some other thoughts…although the crowd anxiety part might not make this possible.

In Tomorrowland, there is a lot of concrete over near Carousel of Progress and Space Mountain that would allow for running around. Nothing really to DO…but running around at least.

There is (was) a pathway that runs along the train track from the train station (which might be closed due to Tron construction).

The pathway along the river attracts fewer people, so gives an option to run a bit.

Also, the old Patio food area in Tomorrowland is usually fairly quite and offers opportunites to move around as long as it is during times whey aren’t using it for something else. 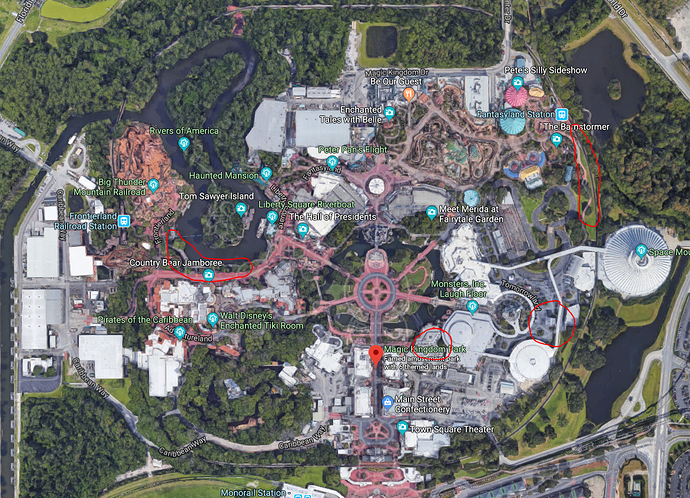 What age are you talking?

Where can I find more about the play area near Splash? I haven’t seen it mentioned in any of my research.

Where can I find more about the play area near Splash? I haven’t seen it mentioned in any of my research.

It is underneath the train station over near Splash Mountain. Not sure if it is too young for a 7 year old or not.

Just found https://www.disneybyage.com/play-spaces-for-toddlers-at-walt-disney-world/. Might be a little young for my kids, but hey - beggars can’t be choosers at this point!

So bummed for you about TSI–my 7 and 9 year old really enjoy exploring there.

Last trip (ages 6 and 8), they enjoyed the pirate scavenger hunt at MK and agent p in epcot ws. Those things don’t really get them away from crowds per se but gave them an opportunity to wander and run/walk around without worrying about lines or where we had to go to next. Kind of structured free time. They were in control of the plan of action. If CL are high, then waiting for a turn to trigger the special effects might be hard for an ADHD kid, but we didn’t have much trouble with that during spring break week.

There is the play area at Dumbo.

Actually 2. Inside the tent where people queue there is a play area and, if you don’t mind "wet’ there is an excellent Casey Jr. Circus Train splash zone right near by.

We used that path next to Barnstormer last month. My kids ran willy nilly the whole way towards Space Mtn and the only other people we saw were an older couple sitting on a bench in the shade.

That’s how I remember it…but I wasn’t sure if Tron construction has encroached on the path or not yet. It will eventually.

I wasn’t sure if Tron construction has encroached on the path or not yet. It will eventually.

The way this trip is panning out, if it’s something that I’m counting on to get away from crowds, then it has about a 99.9% chance of being out of commission the first weekend in November.

So bummed for you about TSI

It is a shame…although, truth is, TSI was in need of some serious refurbishment the last time we were there. Hope they get it back up to snuff.

There seems to always be SOMETHING closed. Our last trip, we were bummed because BTMR was closed for refurbishment.

then it has about a 99.9% chance of being out of commission the first weekend in November.

There will probably be a hurricane that week.

Since you said an 80 minute break, you could go over to the Contemporary and let him run around there. There isn’t a play park as such but plenty of space to run about at the back, near the pool. There’s even a cool Mickey “sculpture” to climb on.

Or even better, go over to FW and let him play on the beach there. Take a frisbee or something in a bag! Explore around Pioneer Hall and Trail’s End if you need something else to do. He may also find the boat journey calming, just looking at the water from the back of the boat. My DS loves this even now - he was 17 on our last trip!

Or go for a walk along the path to nowhere, from MK towards the GF.

Since you said an 80 minute break, you could go over to the Contemporary and let him run around there. There isn’t a play park as such but plenty of space to run about at the back, near the pool. There’s even a cool Mickey “sculpture” to climb on.

I’ll do some more research around that.

I was originally planning a 2-3 hour late afternoon break back at the hotel, but (because my luck sucks right now) the main pool at Coronado Springs is also down for refurb. If the smaller pools aren’t worth it I’ll start looking at other resorts to visit.

There is the play area at Dumbo.

I’ve read about the “enhanced queue” for Dumbo but assumed you had to be “in line” to use it. Is it possible to use that area if you’re not queued for the ride?

I don’t think so…but you could always hop in the queue line just to do the play area, and then get out of line when you’re done if you don’t want to ride. I will admit, we didn’t actually ride Dumbo last trip, so I’m not familiar with the logistics exactly.

My kids (3 and 5) loved the Dumbo play area. They never once rode the actual ride. The Cast Members handed us one of the pagers upon entrance, but they said it was fine that we weren’t going to ride. I think they have to give you a pager to simply keep track of the number of people in there.