How I chose my ADRs

I’ve just had a fun couple of hours planning the ADRs for my June and December trips and I thought some people might be interested in the process.

The June trip is a solo one. The December trip is me and my ex, and possibly two other friends. None of them have been to WDW before.

These are the things I considered.

The first decision I made was that I’d have a late breakfast and an early dinner. Just two main meals. And snacks as necessary. I’ve always been a fan of breakfast as a meal. The idea of a late breakfast is to avoid the crowds. And maybe get some early park action in. The idea of an early dinner is again to avoid the busy periods (when ADRs might be hard to find) and also as a break from a park, to which I could return after eating for the nighttime entertainment.

MK
Breakfast at SH71: I’ve never been and it’s convenient for the park. Dinner at Citricos: again, I’ve never been, I’ve heard good things, I love to visit GF, and it’s an easy side-trip from MK

EP
Breakfast at ‘Ohana: I’ve been once (in six trips). It’s convenient for the monorail to EP. Dinner at Toledo and Three Bridges: this is mostly about wanting to revisit CSR. I’ve been to Toledo once, but I haven’t been to 3B — the idea would be to have an appetiser there before dinner, or maybe coffee after it.

HS
Breakfast at Cape May: it gets good reviews and it’s convenient for the Skyliner — I always like an excuse to ride. Dinner at Sci-Fi: how many times have I bumped Sci-Fi for something else? I’m determined to go this time.

AK
Breakfast at Boma: I’ve never been, I’ve heard good things, and it’s an excuse to visit AKL. Dinner at Satu’li: I’ve been here on every trip — I love it. Maybe dessert at Nomad? Or pre-dinner drinks.

EP
Breakfast at Whispering Canyon: primarily an excuse to visit WL at Christmastime. Plus I’ve never been. And my friends will appreciate the shenanigans. Dinner at Space 220: because obviously.

HS
Breakfast at Topolino’s Terrace: characters, view, Skyliner. Dinner at 50’s Diner: I’ve never been, my friends will appreciate the atmosphere and craziness.

AK
Boma / Satu’li combo as above and for the same reasons.

Wow, I really like your plan, not that my opinion matters. I like the two different focuses to aid in the decision making and choices. You’re a good friend to be so thoughtful.

I would never go to 50s Diner, and possibly not Whispering Canyon, on my own. But I know my friends will like them both and so I’m using them as an excuse to try them myself.

The other choices are mostly designed to blow them away. Which is kinda selfish in a way. They get to understand why I’m hopelessly addicted.

And my ex might, you know, realise that we should get back together. (“I mean, we could pull down the Murphy bed, or it might just be simpler to share the main bed? Give us more space in the room.”)

designed to blow them away.

realise that we should get back together

Has this reopened? Or is this aspirational?

Both breakfast and dinner here are family favorites. Dd20 loves the strawberry soup. She chose it for breakfast on her 17th birthday back in 2018.

Or is this aspirational?

It’s aspirational, but if it’s not open by December 2022, then I don’t know want to say to you.

If it’s not open, then I guess GF Café. Need an excuse to go to GF for the lobby and Christmas goodies.

Or maybe Ohana and walk to MK via GF?

Oh I have eaten there and loved it. I just had not heard - understandably so since it is not - that it reopened. I would be happy if it was.

Actually, no, not Ohana. We’re going to the Poly for Trader Joe’s. Don’t need to go there twice.

Have you been to Tusker before and not liked it?

Actually, no, not Ohana. We’re going to the Poly for Trader Joe’s. Don’t need to go there twice.

Sam’s… Trader Joe’s is a grocery store. We like shopping there, but I am guessing that Trader Sam’s is far more fun!

I did go and I did like it. Loved the character interaction there. But I want an excuse to go to AKL.

Well, I could do Tusker for my own breakfast in June, if I’m doing Boma in December anyway. I don’t need to go to AKL for myself.

Oh, and I only have one character breakfast for my solo trip and I’m not that excited about the characters. So Tusker is a good call for June.

am guessing that Trader Sam’s is far more fun

Haha. Whoops. Yes. My ex wants to buy one of their mugs.

Boma is my absolute favorite breakfast on property.

I think we need more background info on the ex situation.

He split from new boyfriend in December 2021 and got back in touch with me pretty soon after. We went for coffee and it was like there’d never been an eleven year gap. He’s balder and fatter but still the same person with all the qualities I originally admired.

He and I broke up because, well, I was young and naive and inexperienced. I think differently about a lot of relationship issues now. He doesn’t know this yet.

He split with his new boyfriend because he was fed up with his endless jealousy. New boyfriend has already found someone else. 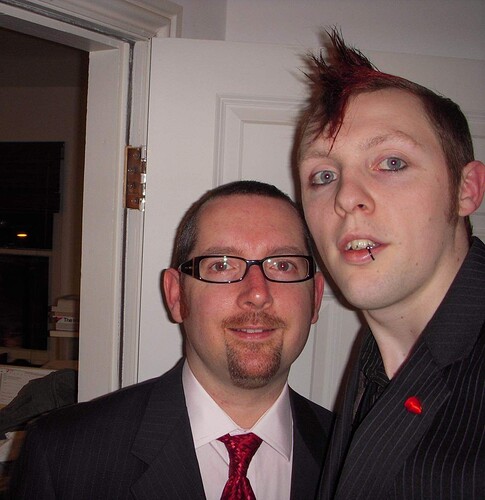 He’s said he’s not looking to get back together.

Omg your outfits and his hair are on theme. I’m already loving this.

So he leaves you for a dude and immediately comes running back once he kicks him to the curb? You certainly left a pretty deep cut in him. Also I would run away as fast as I could bc that is just not cool of him at all.

We, of course, are going to be overly protective of you. If you are happy, we are all thrilled. If he hurts you will will try to hunt him down. Thanks for the picture - that will help.