How do you go bagless in WDW?

Everywhere we travel in the US, each of us has always carried a little back pack. Each of us would usually have a phone, water bottle, lunch/snack, sun glasses case, and an extra jacket if needed. Between the four of us, we would have wipes, hand sanitizer, sunscreen, bug spray, tissue, a camera, a little ziplock of medication, phone charger, and any extras we may need for the day. The kids, DD21 and DS 18, have been carrying their own little back packs since they were 2. It is so nice to have everything in bags and not in pockets.

We will be in WDW 12-15 through 12-22 and want to go bagless to escape the security lines. We will be buying food and snacks in the parks.

Please share what you bring into the parks and tips on how you manage to bring that stuff and still go bagless. Thanks!

All I bring? Portable phone charger, phone, mini 1" ziplock bag of ibuprofen, Drivers License if I want to buy alcohol, and now that I have it i’ll be bringing my Disney Visa.
I buy all water/food in the park.
I don’t use sunglasses in the park, but If i did, i’d just do the ol’ hang them on my shirt if not wearing them. If I bring a hoodie, it ties around my waist when not using.
I don’t bring wipes or hand sanitizer. Just take advantage of the bathrooms to clean up. Tissues you can also grab from the bathrooms, or at least some toilet paper.
For sunscreen and bug spray, just apply before you enter the park. Wear hats if you are nervous about sunscreen coming off. But I find once in the morning is enough. I stick to the shade whenever possible.
I don’t bring a camera. My phone is all I need for photos.

Note: I typically wear pants/capris that have zippered pockets so my stuff feels secure.

I bring my phone. I keep my ID and a credit card on me as well. It is so nice now that the kids are older and we don’t have to be pack rats

I have used a Running Buddy to hold my phone, a credit card, ID, and a little cash. It fits over the waistband of your pants and secures with magnets. It makes going through security a breeze. Even got some positive comments from the people working in security in both DL and WDW. I bought mine on Amazon.

Do you have to let them search it? Looks like it would be easier to carry around, but if I have to stop at bag check I might as well bring a backpack.

Coincidentally, this was the topic of a Touring Plans blog today… 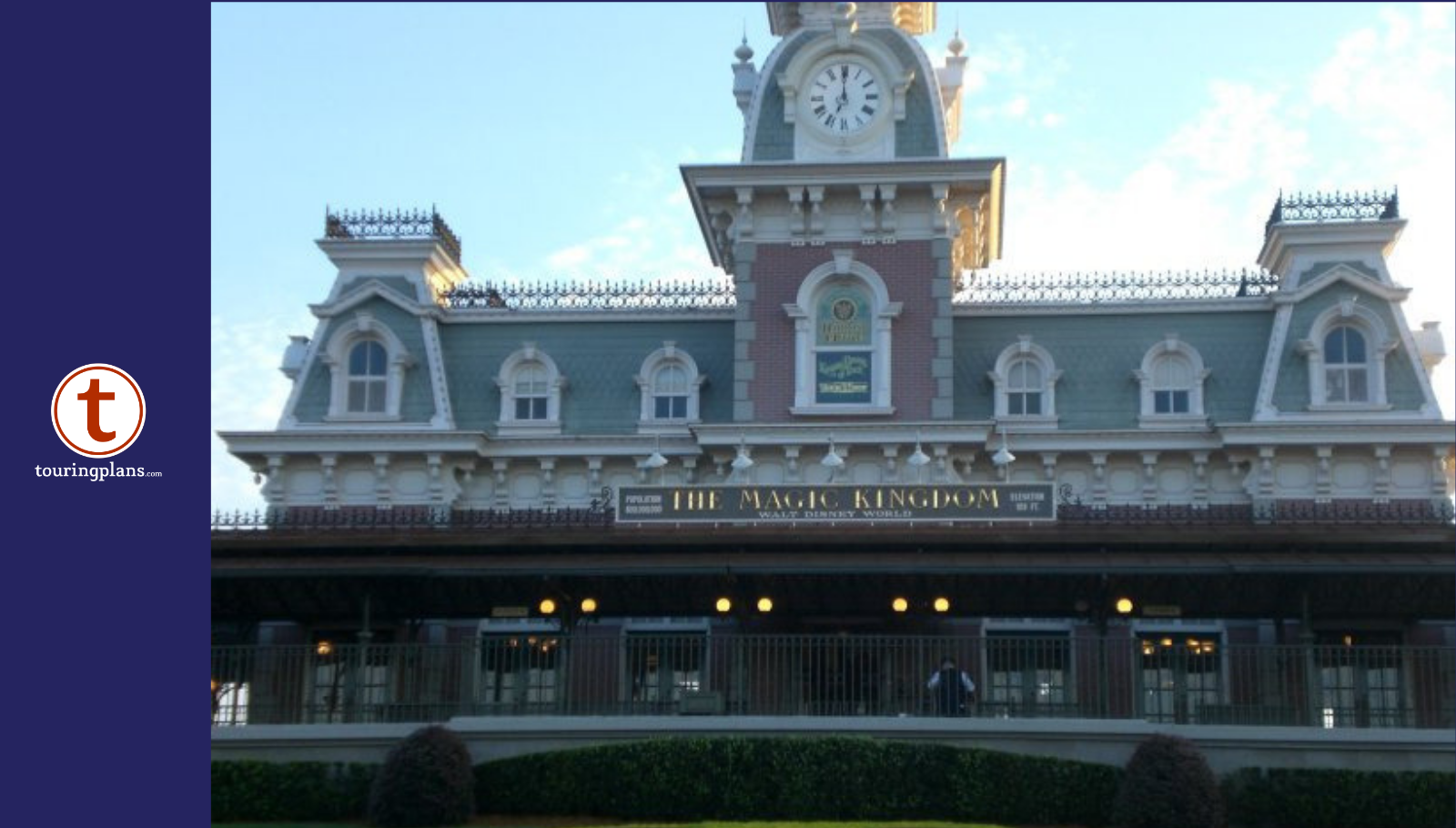 Entering the WDW Parks Without a Bag - Is it Realistic? - TouringPlans.com Blog

Share This!I’ll admit it – I look like a pack mule when I enter the Disney World theme parks. Or

I’ve been wanting to get one of these flip belts, but I don’t know how it would be handled at security. It’s one piece, so getting it on and off requires pulling it down to your ankles and stepping out of it. I don’t see how it would be treated differently than pockets though, to be honest.

Hmmm, im trying to do the same. Went from 2 large back packs first trip and slowly downsized to 1 mini back pack on 8th trip. I find i never use the “just in case” things that I bring but still need a small bit more than my pockets,lol.

I did go through bag check, but it was quick. Of course it depends on who is in front of you as to getting through.

Too true! I’ll move down to a short bag check queue to discover it’s not a long queue because someone has brought enough gear to climb Everest along with their two strollers. I’m trying my best to go “bagless”, but I still haven’t managed it.

I honestly tried the other day to go bagless. Then, I realized it looked like rain. I was so happy I had a small bag with three ponchos during the downpour in MK.

I’m trying my best to go “bagless”, but I still haven’t managed it.

To be honest, the 2 trips with just a Running Buddy were only adults carrying their own items. My October trip will be 5 adults and 2 small children. Don’t get in line behind us to go through security. We will have a double stroller and lots of just in case supplies. I will have a cinch sack in addition to my Running Buddy. I will be in charge of the autograph book and pens, ponchos, and who knows what else.

Don’t get in line behind us to go through security.

You’d be surprised.
We always travel with a stroller, lunch bag, a handful of drawstrings or purses and a back pack. Each of us takes one bag through security, fanning out if that’s an option, and have things unzipped as we go through. Security is just a brief 30 seconds per item and off we go, dumping everything back into the stroller. We barely lose our stride. With five adults you could easily do this.

What has slowed us down is when someone gets pulled for enhanced screening. You know - like my 70 yo mom, or the DH who’s traveling with his wife, 6 kids and MIL & SIL… 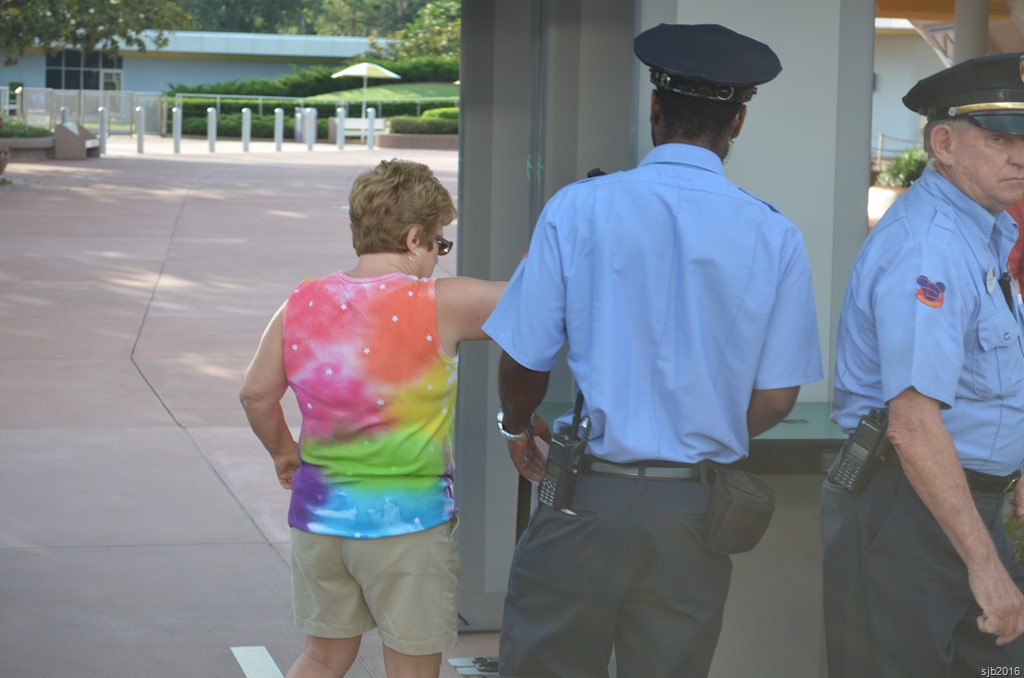 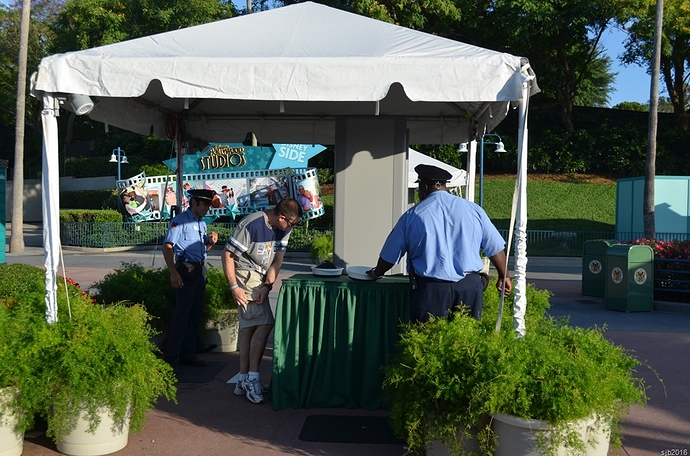 Can’t take them anywhere.
(We were still first at tapstiles.)

We went bagless at Legoland. I squeezed sunscreen into a Ziplock bag and put it in a pocket.

I think a lot of it depends on how long you’re going to spend in the park(s). If it’s all day, I think going bagless can get a bit tricky, but for a few hours (especially after sunset) it’s really simple.

The best thing I’ve found are those little wallet things that go on your cellphone. A bit awkward at first to get used to, but once you do they’re fantastic. 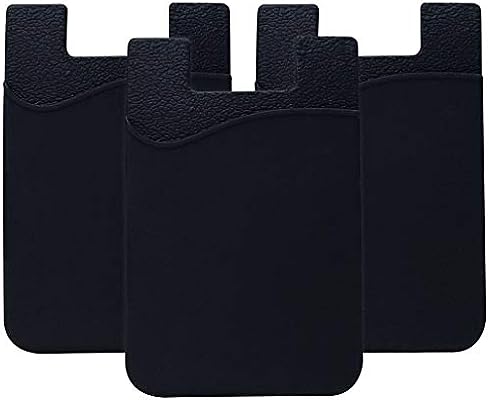 These little doohickey’s stick to your phone case and then you just put in your ID and a credit card (and your AP card if you have one) and you’re set. And now that cell phone cameras no longer are terrible, there’s no longer the need to drag around a big camera.

For all day, i’ll admit I haven’t found a way to go bagless just yet. I’m getting close though. Travel-sized sunscreen bottles are a big component of that. Throw one of those in your pocket and there’s not much else you really need other than a phone charger. LIke the blog that @darkmite2 linked to, the big question is " Do I Really Need to Have Every Solution on my Person at All Times? "

You’re not Batman… so no, no you do not. And if something DOES come up, you are in the very hub of catered-to civilization. It might cost a bit more should you need it, but…will you?

The biggest issue is the phone charger for me, now. It’s big. It’s bulky, it’s blech. Though to get around that, you COULD just bring a charging cable with you and plug in while in the parks. But that leads to you being stationary for a set amount of time (hard pass for me). So still working on an ideal solution for that.

Doesn’t WDW have some kind of fuel rod thing?

LIke the blog that @darkmite2 linked to, the big question is " Do I Really Need to Have Every Solution on my Person at All Times? "

Sometimes searching is such a time eater, too. I like to have bandaids even though there is a first aid station. There you have to walk there, sign in and do their protocol. Etc.

Yes, now that you mention it, but doesn’t that cost to switch out? I don’t really know as I didn’t do much looking into it when I learned it’s like $35 bucks to get your initial one (at home), so I’m not sure of the full procedure once you’re in the parks. But it definitely is an option.

My thing would just be I’d need to switch out 2-3 times a day because they’re kinda low mAH, if i remember right. However, if you can, without extra cost, then … shoot that’s the solution right there, I guess.

Sometimes searching is such a time eater, too. I like to have bandaids even though there is a first aid station. There you have to walk there, sign in and do their protocol. Etc.

But again, how often are you going to run into a situation where you need the bandaids? If you or someone in your party is accident prone, sure it’s a good idea to carry it, but if not, you’re bringing it along and it’s just taking up space.

Since the Liner who shall not be mentioned isn’t going to chime in, the answer is cargo shorts.