Hoop Dee Doo or Storybook Dining? (You can only pick ONE!)

I booked HDD for our January trip, and have been excited about it! (As an aside, it is one of the few vague memories I have from our only family trip when I was a kid… see image, circa approximately 1978ish, yup that’s me, I just realized that I’m wearing my DS18’s soccer number, lol!!)

ANYWAY… I have it scheduled for our first MK day at 6:15.

BUT THEN I started hearing about Storybook Dining and thinking that sounded pretty awesome. Of course this was after my ADRs, and nothing was available, but I just got a reservation for 5:40 on that same day! (THANK YOU TP res finder!!

) Now obviously we can’t do both, and although in theory I could move HDD to a different day, I really don’t think I want to do that, as we are pretty heavily scheduled as it is and I want at least a couple of “early evenings” for resort/pool time. Especially given that both of these require us to travel there from a park (eating up park time), AND the costs, I feel that I should pick one or the other.

It is myself, dh, and ds18, ds 16. They don’t give much input, other than some scoffing and teasing me whenever I mention HDD, but I think they might end up really having fun (even though they won’t admit it lol). But I also think the character interactions at Storybook sound great. Arghhhhh… what to do? 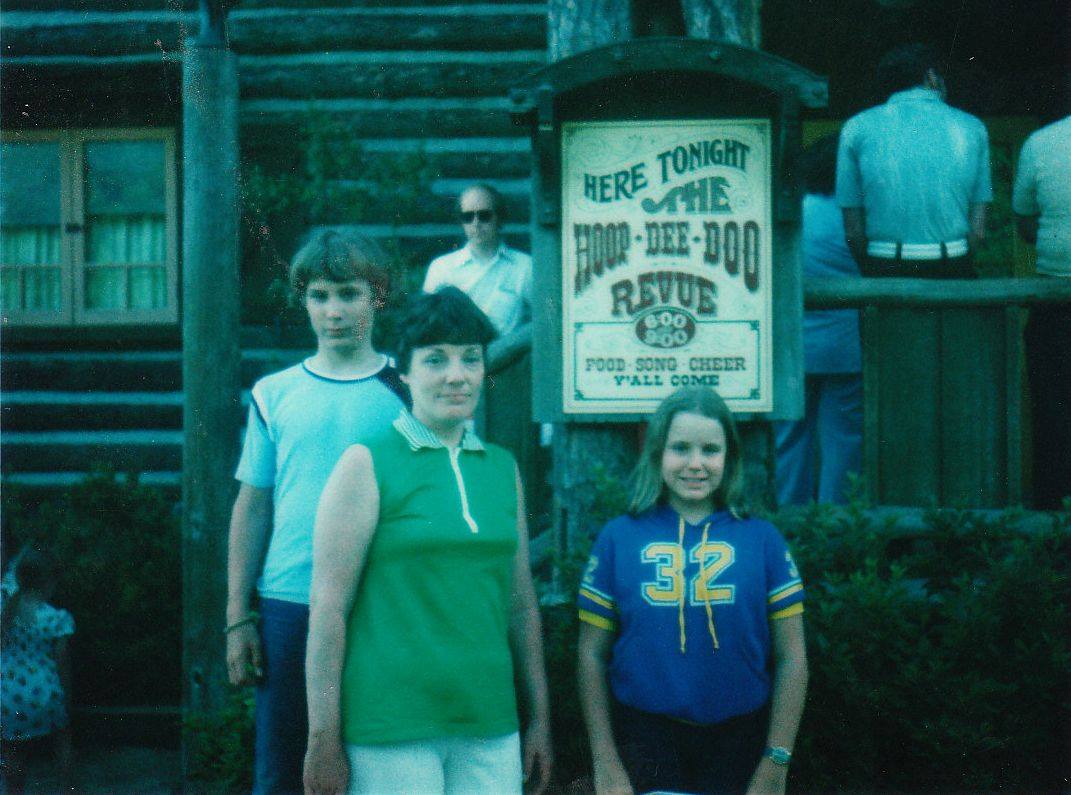 HDDR.
Did not even read the post. Just answering title question

lol… fair enough! I think I’m leaning that way too. Unless I talk myself into both.

No NO NO I WILL NOT TALK MYSELF INTO BOTH!!

I’m having the same dilemma. I think it comes down to what do you care most about - seeing a show or M&G dining.

For me I’m going to HDDR. I love fried chicken and corny laughs. While I admit meeting the Evil Queen is a bucket list M&G I’d still rather do this unique show experience.

Love that photo! Please tell me the guy in the sunglasses in back is with you.

(No help on your question: Going to HDD next month for first time – excited! – and haven’t been to Storybook.)

Please tell me the guy in the sunglasses in back is with you.

LOL! No, looks a little bit creepy now that you pointed him out!

haha! It’s me, my mom (passed away suddenly in 1996 so this picture is especially bittersweet, she loved our trip to Disney

) and my older brother. Dad was presumably taking the photo.

I did not read the post either as there’s no need. HDDR

I did HDDR ages ago and don’t remember much from the show, but I have recently had the fried chicken at TE, which I am told is from the same kitchen. Just on the the food alone I would do HDDR. The menu at SD does not appeal to me in the least.

I have only been to Storybook and even I am going to vote for HDDR!

Another consideration with HDDR is the table assignment in category is based upon when you book. The first to book in category get the closest tables. There probable isn’t a bad seat but the better seats are filled first.

Really? I didn’t know this! Good to know. I did book Tier 1, quite close to my ADR day. It sounds like I could get worse seating if I now change it to a different day!

I am definitely keeping the HDD. I’ve also already started a list of “things to do on the NEXT Disney trip”… LOL! If only I could go to Disney for a month or so, I could just fit it ALL in!

I only know because they told us at check in last year how seating worked… Booked 180+7 category one. We were front row stage center and I think it was the second table in category

I just went back and checked my confirmation email. I booked in the evening on 180+3, so not quite as good as yours but hopefully good enough. I actually booked that morning for 180+4, but then later decided to change it from Monday to Sunday, because Tuesday is our Universal side-trip and it will be a looooong and early day, so I don’t want anything on the schedule the evening before.

I’ll be interested to see where we end up, now that I know the system!

One counter would be if you are using the Disney dining plan. HDDR wasn’t worth two credits to us, and storybook is just one.

The first to book in category get the closest tables. There probable isn’t a bad seat but the better seats are filled first.

My vote is for HDDR… but close seating is not better. On our last trip, we were front row. Never again! Had my neck craned the whole time, like front row at the multiplex theatre. The cast members kept remarking on how good our seats were… I’ll have to deliberately book later if that will give me mid-to-back seats.

I have an unpopular opinion. We really didn’t like HDDR! Sorry not sorry!

Creepy guy in back is Secret Service agent. You were obviously a VIP family. And you’re wearing Jim Brown’s jersey.

We are not using the plan, but good point!

Ahhhh, well now it makes sense. At that age, I had zero interest in football. However, my maiden name is Brown! Mystery solved! lol