After the recent update, Rise of the Resistance is now showing a 100 minute wait at rope-drop for August 19. Is this a glitch? Or passive-aggressive commentary on the fact that it breaks down so much? Disney’s website doesn’t say anything about the ride opening late.

You’re right, that is what the TP forecast is showing: 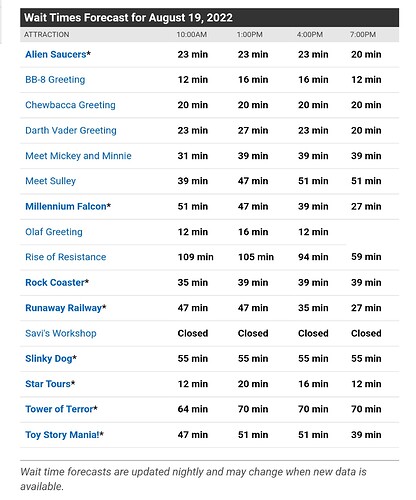 But always refer to recent data to confirm. You can see here the black dots at rope drop are showing a 95 minute posted wait. But see the actual waits were half that. 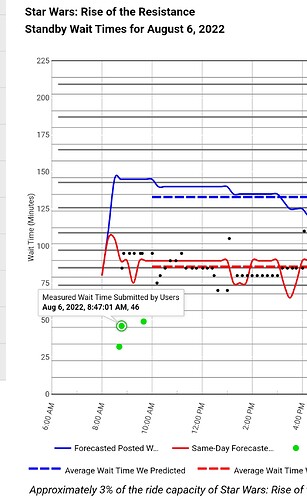 I had no doubt that the actual time will be less, especially since we will be rope-dropping the Skyliner to get there. But, it’s completely throwing off my plan for the morning.

I would optimize your plan after you complete the ride. Rise could be delayed on opening you just never know.

You could always remove it, and add a dummy step instead with a “meal” for your best guess of time at the closest location. This will allow you to start with a closer plan, then optimise once you complete the ride as Pricipal Tink states.

We know the reports say that Rise will be open before official early entry park open time. We know they will let us in to the park 20 of so minutes early too. Only here at HS though.

I’ve made my first “attraction” of the day to be Oga’s. I’m going to Rise first, then Falcon. I made Oga’s for 810a. That’s when I hope to be arriving at Falcon for 20 minutes. So at 830a, I’m starting the real TP steps.

Maybe not with the early entry and Rise being open? Yesterday reports were that HS allowed people through the gates right before EE time. Rise was down when people walked that way (there is never any warning). July 23rd gates opened about 10 minutes early (I have experienced 30, 20, 15, 10 minutes early in the last 6 months). On the 23rd Rise, MMRT, and RnR were all down. MMRT opened at regular park opening.

You always need to plan for Rise to be down and know where you are going next. Then, have a back up plan for that.

Yes thanks for the reminder. HS entry has been 30 minutes before official ETPE, with ROTR being the only attraction at WDW that starts running before that official ETPE time.

Yesterday reports were that HS allowed people through the gates right before EE time.

Thats a bummer. Maybe that summer operational change is over.

My guess is it depends on who is in charge each morning.

And probably whether everyone showed up on time, and how ling it takes to get all the systems up and running and have at least a ride or two ready to go… I think that they probably just wait until all the pieces fall into place, and then make the call to open up.

I’ve always thought a hard RD time for early entry was kind of silly… just say “early entry will begin by 7:30”, and if the rides are ready before that then bring on the people.

Just following up here. On Aug 19, we were first at the taps chatting with the cast member. Rise failed a safety check but still opened 10 or 15 minutes early. We pretty much walked on, did falcon, and made our way to toy story land, did A$$ twice for my 7yo, and got to slinky by 825 for our 830 g+ tap in.