Just read that Hogwarts Express will be closed for refurbishment in mid-June, when we are down there. It’s our first trip, and I have two girls (8 & 6) so we are really disappointed.

Do refurbs ever finish a couple days early? I need some hope here.

We already have trips booked for November & next June, so I know we will have more opportunities in the future (and we bought AP’s), but this announcement stings.

This is indeed disappointing but maybe I can give you a tip for your Nov trip. Go to magicalvacationstravel. Yes it’s a TA but I have no connection other than using them once and a while. Great Universal Specials in Aug,Oct. Nov. and Dec. Royal Pacific, Hard Rock, and Portifino at 50% off on certain dates.

Their specials are for early November. We’re going Thanksgiving week because my husband works in education. Already booked savvy traveler for Portfofino at $387/nt, which I’m happy with.

With the Hogwarts Express being closed, is there another way in between the parks without getting back up front to exit/re-enter?

Not normally, but there is a backstage pathway between IOA & Studios. It’s between Seussland on the IOA side & near RRR in Studios. Doesn’t open very often but with HE not an option, maybe they’ll open it up

The Crossover Path is open during Grad Bash (showing in the app), so Universal would be wise to open when HE is also not running.

It’s not a super shortcut because it’s close to the front of the parks, but should still save 10-15 minutes vs entrances. Minion Way in USF and at Circus McGurkus Café in IOA. 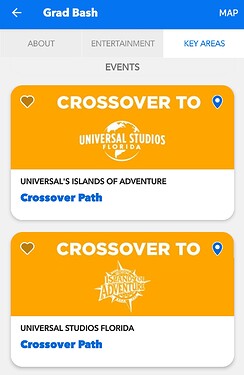 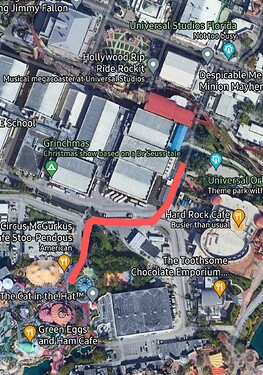 Thank you— definitely a first world problem, trying to keep things in perspective.

Do you have the exact dates? Planning a day trip on June 9th

On the bright side, this is a good excuse to get one-park-per-day tickets for anyone going during the maintenance (no help to you since you have an AP, however …)

Thanks, it’s actually the 8th so we are good

Seth Kubersky reported (5/10 UUOP podcast) to look for a direct entrance to open up between Suess Landing and USF during refurbishment.

Nooo! My HP-crazed daughter and I are arriving 6/10 for a four-day trip. First dedicated Universal trip, we’ve only been once before as part of WDW trip.
Is it worth seeing if they’d give a refund for park-to-park Tix? I got them specifically to ride HE multiple times

It’s worth a try. Even if they don’t give you a refund, they should allow you to apply the cost toward something else, like Volcano Bay passes. It’s the type of thing I think they should offer refunds for, personally. How hard you have to fight to get one is the question.

Still, if you haven’t used them to hop, you might convince them.

I saw they were issuing refunds for park to park tickets when people requested it when HE went down unexpectedly a couple months ago for a few days. I don’t know if they’ll do the same since this is a scheduled maintenance event, but it doesn’t hurt to ask.

So I’ve read that Hogwarts Express is officially closed as of today (as they had stated). Now I just need to find out if the walkway between the parks is open… and hope the refurb opens early, 6/17 would be ideal.

Seth specifically mentioned the path last month, but he did not in this weeks news updates, when talking about HE.