After checking, the touring companies may also provide security at the hotel. And they hold the liability insurance for you too. So some things we’ll just have to get by ourselves.

Not sure if security is necessary. Maybe it’s to keep the kids from escaping the hotel room overnight!

I remember some horror stories from my band trips as a kid! As an example, one time some of the older kids tied a rope around the doorknob of the teacher’s motel room and fixed it to the balcony railing across from it so it couldn’t open. They then proceeded to play games in the parking lot very loudly after midnight.

(At least there was no booze.)

I’m sure with a smaller group and good chaperone coverage, your trip won’t run into that kind of stuff.

If we don’t hire overnight security, maybe the chaperones should do “bed checks” once or twice.

To add to that… no ground floor rooms to force them to walk by adult rooms. On the ground floor they could just jump the hedges.

I have nooooo experience here at all. Nope

After deducting an estimated $160 in food from the Touring Company price, the savings per person by going direct are:

If we agree to use use a Touring Company, we would have to purchase our own liability insurance, rent a box truck for band equipment, and we would have no escort other than Universal’s own Team Members.

And then of course bus transportation, airfare, workshop, food, etc. are additional costs I have to estimate. Private security is an additional option too. 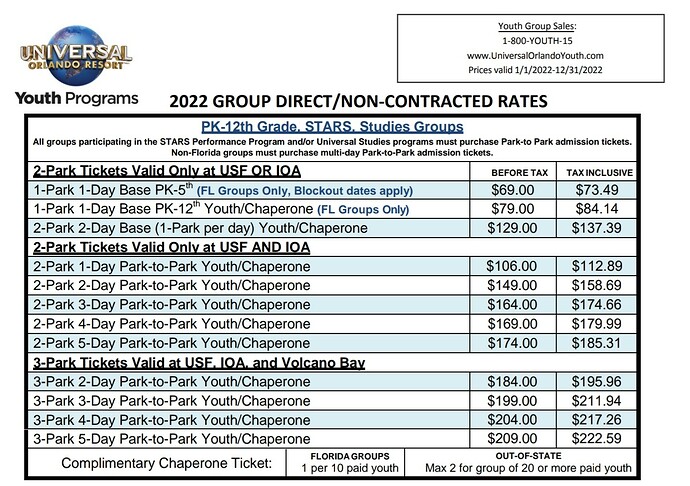 I’m salivating over those ticket prices. I’d love to get those rates for my family. Does it have to be a youth program to get the 20-people rates? I’m not planning on 20 people any time soon (and I wouldn’t pay for it just to get the rates) but I’m curious if they do similar rates for touring groups / adults?

The band does the STARS program, but other kinds of groups are accepted. Here is the page link.

I think you’ll love Cabana Bay for this sort of trip. You really can’t beat cheap plus walking distance.

Plus all the things at the resort to do. If it’s raining one day, hey let’s go bowling. And the arcade is there too.

Found out today that our band trip was approved by the school board, and we can self-plan. It will be in January 2023 on and around MLK Jr. weekend. 4 full days and 5 nights, probably at Cabana Bay. Up to 3 school days missed. There were a good number of middle schoolers showing interest in marching band lately, so maybe 40 kids next year. We shall see.

I’ve got a timeline drawn up from everything on the to-do list. Next up is getting hard quotes for the hotel, tickets, and airfare in February. Then I can get a Save-the-Date Flyer out with trip cost estimates and other information.

Why do I love planning so much

Planning is going well. I am so impressed with the customer service at Universal. I’ve been in contact with the youth group sales department by phone and email. I have called random times with some basic questions and never had to wait to talk with someone. Email replies are quick too.

One of my concerns is our small band size. I did get clarification via email on minimums. In order to do a STARS Marching Performance in USF, our group has to be 40 people. That includes chaperones and family members. So basically, your group just needs to purchase 40 tickets for the marching band to perform. As of right now, 35 kids are signed up for this coming season. So even if only 25 commit to the trip, we can still march. (We’ve had many family members say they want to come with on the trip)

Now the Sound Design Workshop is a different story. They require a minimum of 40 students for that, so looks like we won’t be able to do it. That would have been around $50.ea

Last weekend I had filled out a group vacations form for hotel/ticket pricing. On Tuesday while at work, I got a call from a UOR sales rep. It kind of blew me away, very unexpected. He just called to ask if I have any questions. I wasn’t sure what to say, so I just gave him the band timeline that I had in my head. Basically, at/after band camp in August we would record a short video clip of a song that they would perform at Universal in January 2023. That needs submitted and approved in the application process. That would have only been about 4+ months ahead of the trip. But, he then said we should apply now using a video from last season (we did Coldplay theme) and then just send in the actual performance video later this year. That way they can hold a spot for us. Since they only have 2 marching bands perform per day at UOR, I’d guess there is not room for everyone who applies, especially since it’s during the MLK holiday weekend. First come, first served. Very thankful he told me!

So currently working on the application. You pick 3 preferred days you want to march and then choose the Morning Marching or the 2pm Superstar Pre-parade Marching. Working on that application now.

P.S. The band director is considering The Greatest Showman theme for this upcoming season. I did find out that Universal approves of it, even though it’s owned by Disney.

Working on that application now.

We are confirmed for Monday January 16, MLK Jr. day! 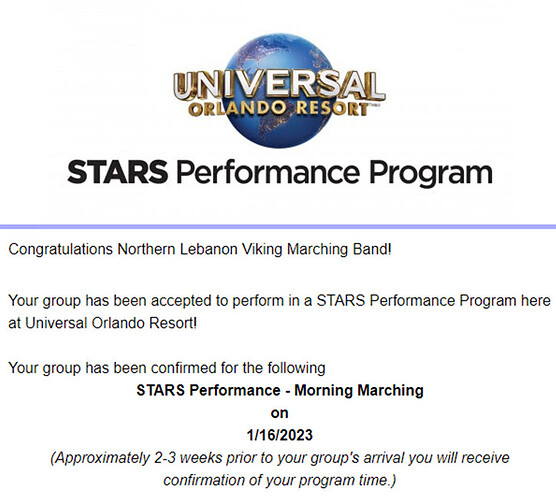 Awesome! Glad that worked out!

So…we have a new Marching Band director. The previous one was kind of temporary, but had been here for 3 years. I spoke with the new guy about the planned trip and answered his questions. He ended up deciding on using a travel agency to plan the trip.

I’m a little bummed but will roll with it and help out any way I can. I’ve got touring info, tips, scavenger hunt, etc. He mentioned a possible date change. I’m hoping if he does change it, it won’t be too far from January or I may not be able to go.

Need the liner group to provide any letters of recommendation that your free services would be most helpful?