The other factor is the size of the marching band. It is smaller than it was from the last trip and there are requirements for the number of performers. Currently there are 34 in the band including 7 color guard. It’s possible to grow next year, but not sure how much. 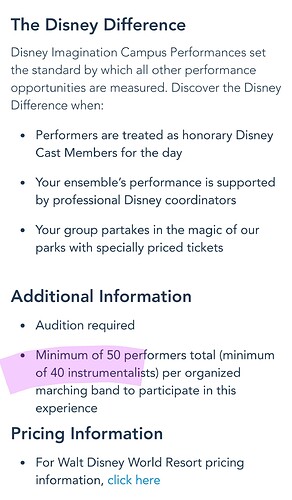 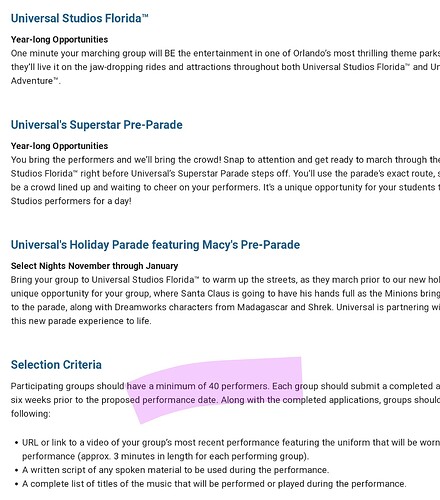 For anyone interested, I’ve been in contact with Four Seasons Tours. They are based in the Orlando area and focus only on band/school group trips. Disney has recently told travel companies to enforce their minimums (40 instrumentalists and 50 performers) because all the schools that had to cancel will all be trying to book in the next year or two. Previously, they were not strict on those minimums. Universal’s minimum is 40 total for a group, this includes chaperones.

I also got package estimates with staying at comparable resorts. Disney is $300-400 higher than Universal depending on room occupancy. (5 nights, 4 park days)

And with Cabana Bay, you can take a 15 minute walk to the parks. Port Orleans and Coronado you only have the bus option. (which also takes longer than the UOR bus).

Idea: is it possible to invite some alumni from the past couple years to join the band on the trip to meet that minimum? Some kids who just graduated might jump at that opportunity. Otherwise the band director might have to really beat the bushes to find a couple more members next year. (“Anybody want to play the triangle? You’re hired!”) Good luck, sounds fun!

We are working on a plan with ideas to recruit more members ahead of next school year. We have to meet with admin to present. I will know next summer if we can meet that minimum and if WDW is a possibility.

Our actual visit would have been early 2022, but with the uncertainty the school would not approve the trip. So, there are 5 band members who are graduating and will unfortunately miss out. They will be invited to come next school year, but may not be able to as they will probably be off to college.

Good idea about the alumni, but I’m not sure if that would work. They would have to practice with the band in order to march? I will mention to the parent committee.

My kid decided not to do HS marching band BUT if there had been a trip to WDW on the horizon, it might have been enough to keep her in band.

After I was encouraged to get direct quotes on tickets and hotel costs from Universal, I’ll be doing the planning myself to save a fair amount of money. The $250+ per person more from going through a travel company doesn’t seem justifiable. We may not even do 1 WDW day, most of the band parents seem to like the idea of saving more money and just staying on Universal property the whole trip.

Tentative travel date is January 2023. I love planning family trips, but hope I don’t screw anything up with the group.

Wow this seems like a bad deal. What’s driving the difference? Is that an explicit fee for their service, or are you just able to find better savings than the agent is finding?

That’s what I came up with after crunching the numbers. They throw in food gift cards and stuff so you have to do homework to compare apples to apples. When contacting UOR direct, it was easy and quick to get group pricing.

The travel company sends you one guide on site. I know for sure for the marching performance and workshop. Not sure about any other time like arrival etc. Some other perks are very minor, like lanyards etc.

I can do all the bookings, it’s pretty easy.

Many times the large group travel companies take care of all the logistics necessary to move groups of people …and all their stuff. This is even more complex when you include instruments.

I am not saying they are worth $250 more per person, but that there are a lot of things that they know how to do in the most efficient ways and will automatically handle.

My dd marched in the 2019 Rose Bowl parade. That included getting everyone there and back, transporting them all around the LA area, instrument logistics, spending a day at DLR (including marching down Main Street), a field competition, and the parade itself.

They actually packed any “checked” luggage on the equipment truck and had the truck sent cross-country days before anyone boarded a flight! This streamlined the airport experience w/ no one needed to check or pick up bags.

There were completely different itinerarys for the parents/families and the actual group. As a Liner who plans all of my trips, not just Disney, I was personally VERY frustrated w/ the travel company (and I am sure they weren’t big fans of me w/ my questions of things they really didn’t want to answer) BUT, when they got us in and out of the Rose Parade itself …and the complete madhouse. I was extremely grateful for them!

I just wanted to point out that there is many more considerations and unique logistics with a large, musical group than a family vacation.

Thanks! Those kind of things are nice for sure.

One thing we do plan to do is rent a Penske truck for the week for equipment, food, extra luggage. It’s a long drive, but we have people willing. That will make the flight for the students and chaperones much easier.

Having a small band helps too, I would be hesitant if we had a huge band.

And I know my way around the parks. Universal will give me detailed instructions for the March and Workshop, so I feel fairly confident I can do this.

I will also have to fill out a form to the airline for group travel. And I’ll have to get private bus transfer from MCO. No biggie.

You should budget for and get approved a small agent fee for yourself.

As long as they let me be a chaperone and have all the fun too… no extra charge.