Check in Club Level: We arrived at the Grand Floridian and were greeted immediately at the car. Since my mom and daughter needed to use the restroom, I sent them inside, while my husband and I unloaded the car. We were asked if we wanted to valet park or self-park and we chose self-park. $20.00 a day for valet was not an expense that we wanted.
It was amazing as soon as I started to walk toward the main building entrance I was greeted by name. Charlie, took us inside and he walked us to Sugarloaf Club Level area. I had done on-line check in and all of my requests (high floor and balcony) were granted. We sat in the lounge and Charlie explained all of the amenities and addressed all of my question. Our room was not ready, so Charlie took my cell phone number, so I could be messaged when it became ready. While we waited we ate some “crudités” and enjoyed the surroundings. Our room was ready within 20 minutes.
Room 3611 is a handicapped accessible room with a roll in shower. As you can see by the pictures, my mom is very short and had some difficulties navigating the room in her wheel chair and the bathroom. Luckily, my mom is able to walk, so this was not an issue.
Lounge offerings: We are not big eaters, so the amount of food and beverages available was plenty. We ate breakfast there every day and I want an Espresso machine! Unfortunately, that machine cost $3000.00, so I will need to research which model we can afford. I recommend allowing the “vultures” to eat first. It was hectic and a mad house as soon as the food was put out. I am a strong believer in being courteous, but people would reach within 2 inches of my head to get a cup. C’mon I would be on my way in 3 seconds, but I would get boxed in and not able to move because I would have a people on either side of me and not behind me. Also, some children made my stomach turn by touching food that they were not going to take. I am a bit of a germaphobe.
Seating was never an issue. We would sit by the doors that lead to the marina, to avoid the melee and mayhem on people who appeared to have not eaten in months.
The staff is very prompt in replenishing food and clearing the tables. Yes, you leave your dishes and cups on the table and they clear it for you. The staff was also very prompting in clearing the food and beverage area when feeding time ended.
My mom cannot eat soy, so Chef Russell, prepared breakfast for her every day. Unfortunately, it was a bagel and chocolate muffin. My mom has not teeth due to her radiation therapy for salivary cancer and she hates chocolate. My daughter ate my mom’s prepared mea. I did not want to bother him and the food was not going to waste. In order to receive the allergy free meal, I needed to speak with the concierge, so the first day’s meals were not allergy free. I wish that this could have been handled ahead of time, so that my mom could eat the first day.
On a side note, I have always been very happy with how Disney handles food allergies. But, on 2 occasions we had problems. My mom cannot eat soy because of her blood thinner medication. She will not die if she eats soy, but her medication would be more potent, so she just avoids it. I am allergic to shellfish products. I do not know first had if I have an anaphylactic reaction, but breathing is high on my list, so I avoid shellfish, and carry Benadryl with me. At Tokyo Dinning it was very ridiculous. It seems as though the manager never relayed the allergies to the chef and that the waitress did not notice. A second manager came over to ensure that everything was satisfactory. I was already freaked out about having shellfish on my plate and I did not want it just removed, I wanted a new entrée made for me, and it was, but in the chaos they accidentally gave us an extra white rice and then charged us for it. My mom was supposed to have white rice, instead of the rice offered with her meal. When they remade her meal they brought another rice. It was not our fault, and I would have said something, but I honestly just wanted to get out of there. My husband and daughter were just about done eating, but the time I got my food.
I am going to e-mail guest services and make a recommendation that they offer pamphlets or something, so that people can make food selections ahead of time without so much hoopla. I know to stay away from shellfish, but for my mom with her soy issue, it is difficult to decide what to eat when you don’t know what you can have. Managers do have a binder with food allergy options but I felt like twice I needed to fight for a safe meal. At Cosmic Rays our order was completely messed up and the food server behind the counter argued with me. If someone says that “no, she cannot have fries because of the soy. It is not appropriate to say “yes, they no soy.” He was corrected by the manager, but that could have been potentially fatal if she had that type of allergy.
The concierge staff was amazing and very helpful. I do believe that they have pixie dust abilities. I wanted to change an ADR, but the time I wanted was not available. I asked Linda, Concierge, if the time I wanted was available and magically it was available.
That’s all for now. Thanks!

Here are some pictures: 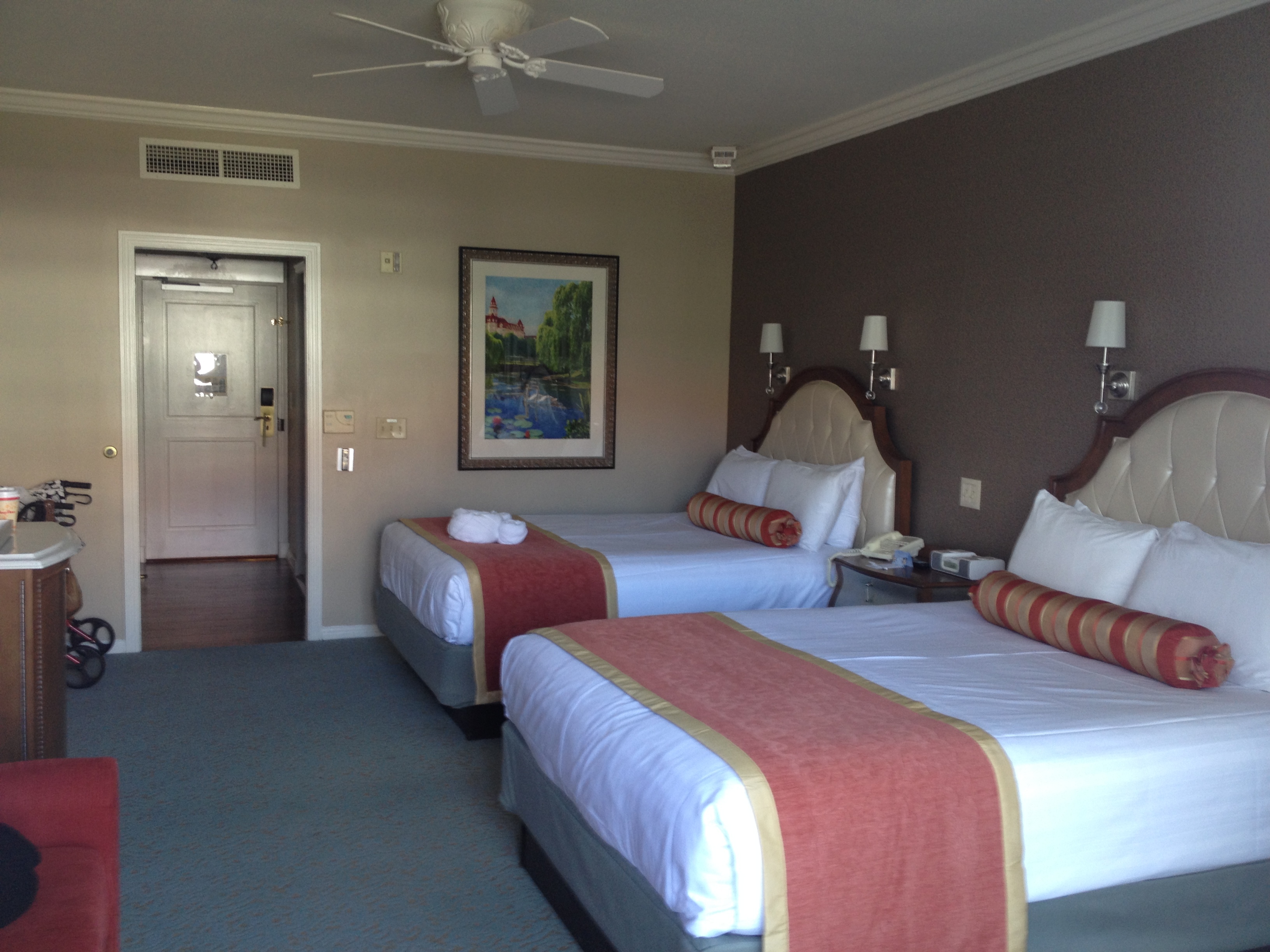 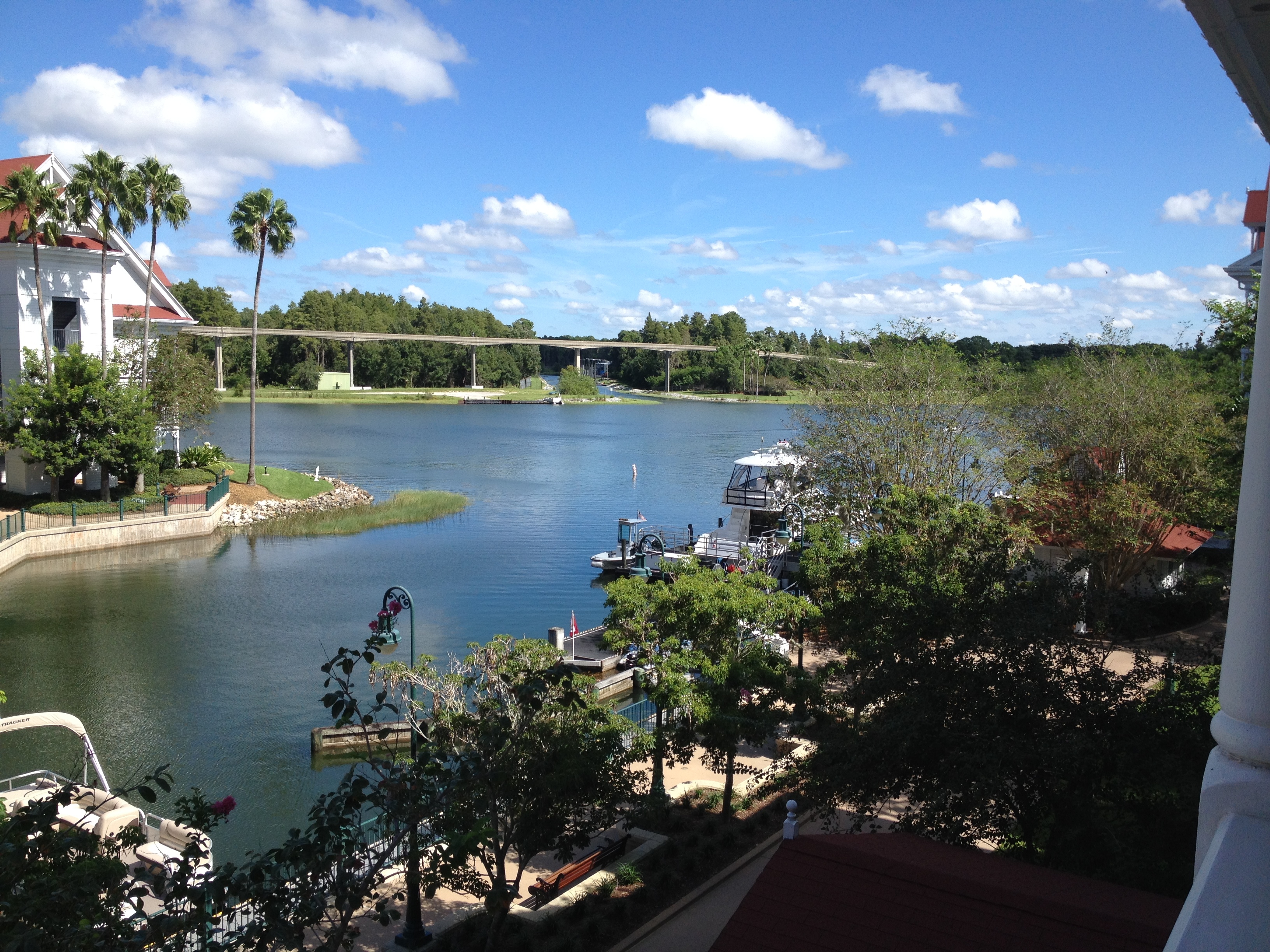 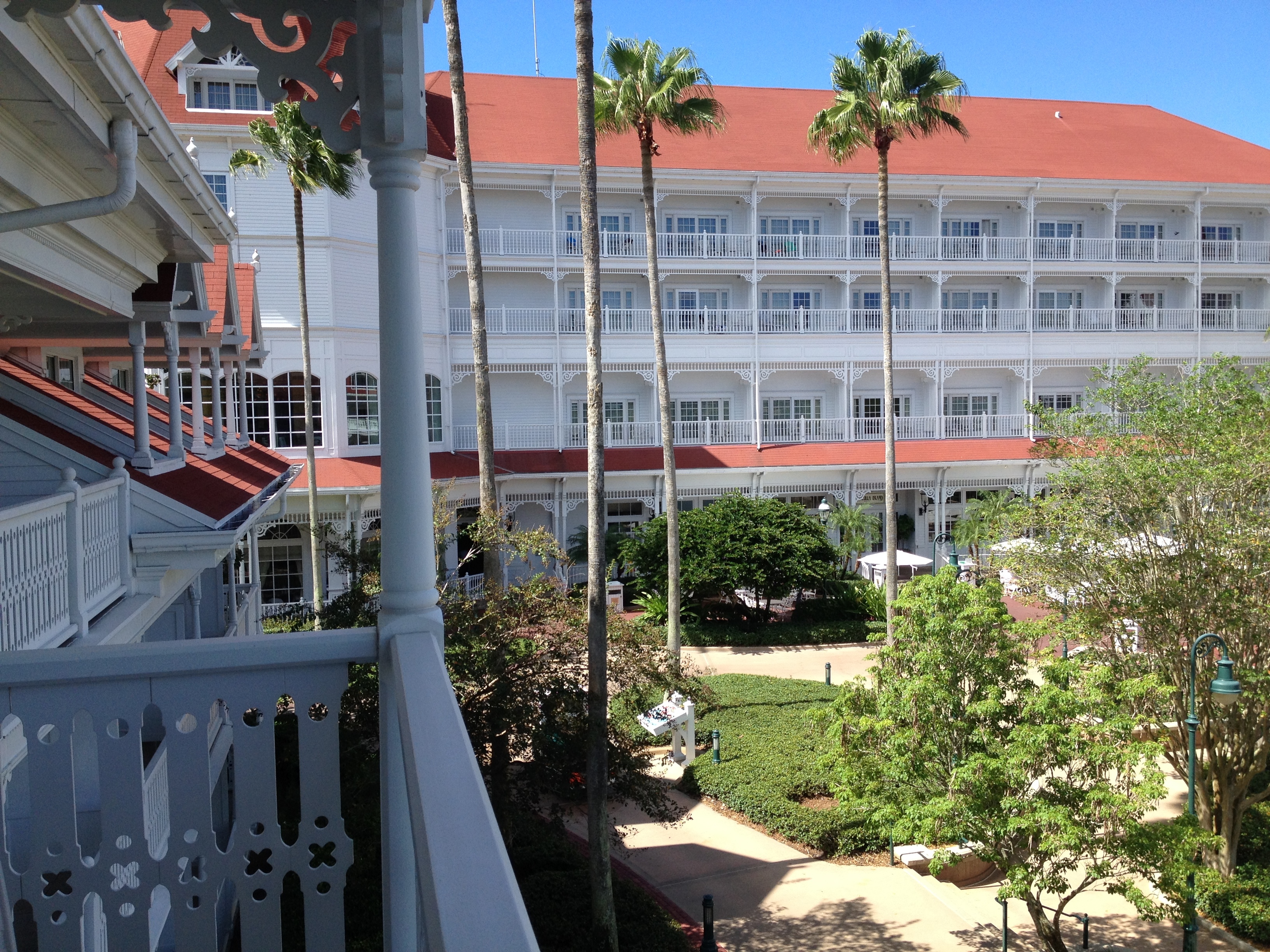 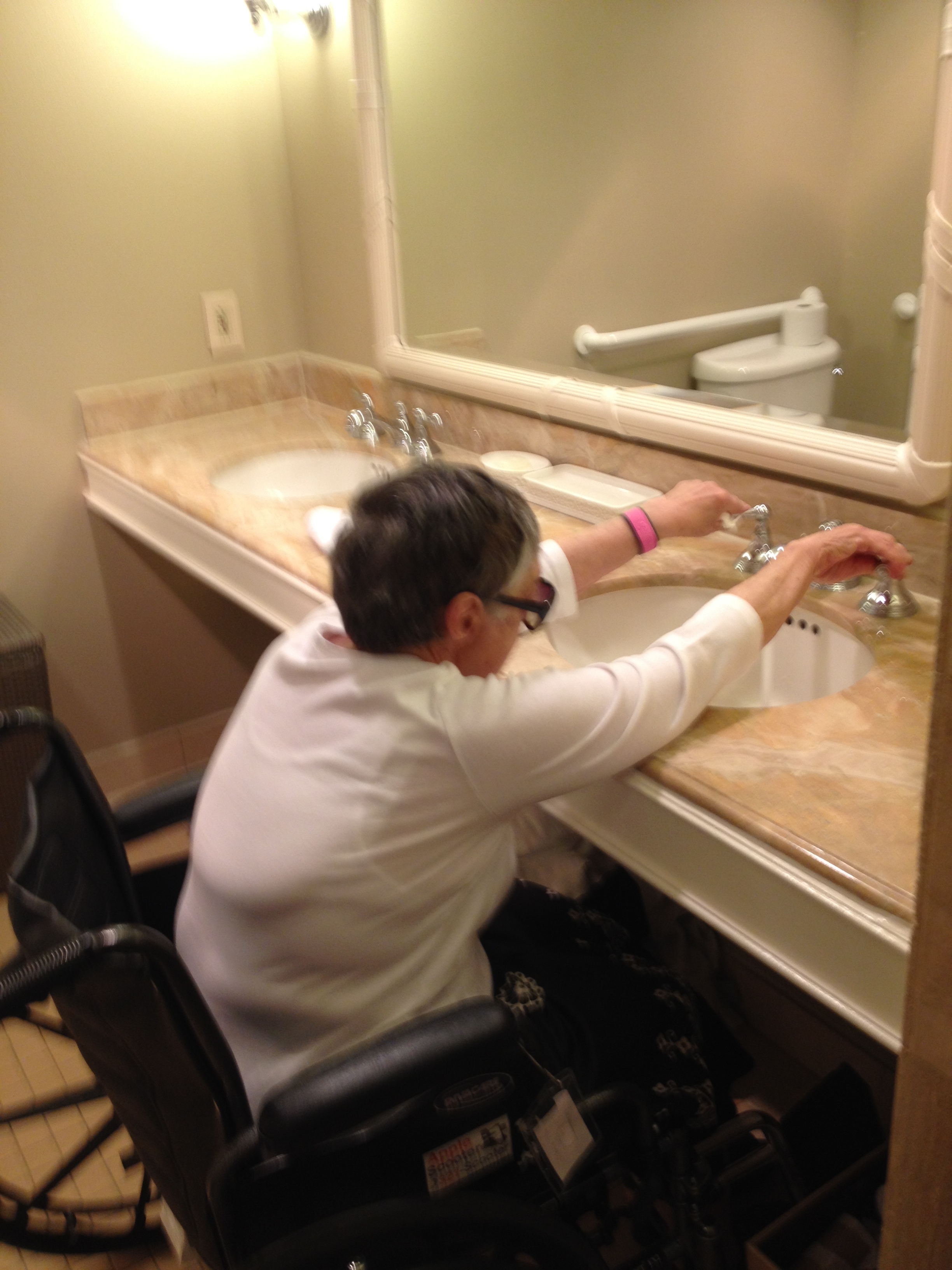 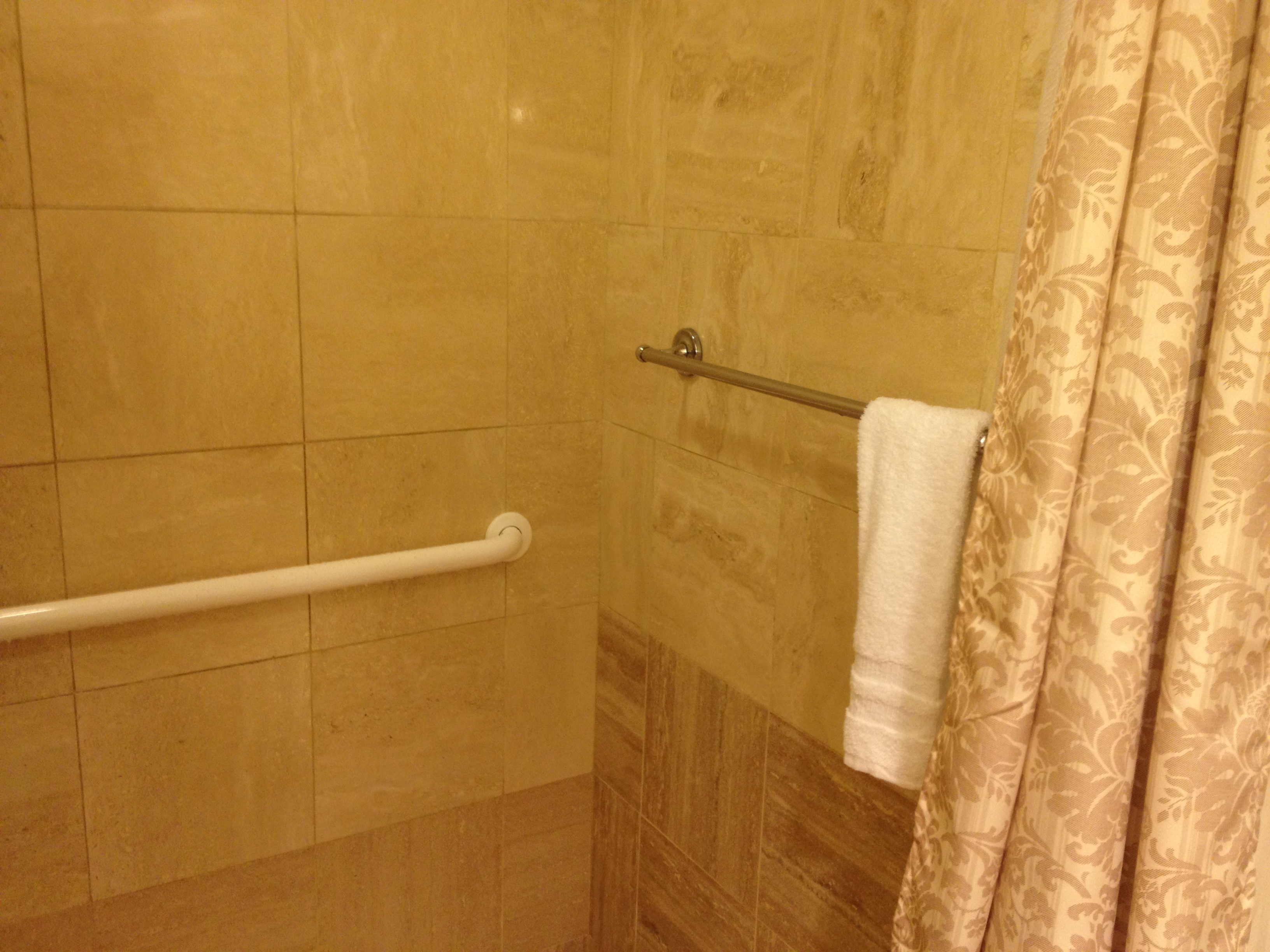 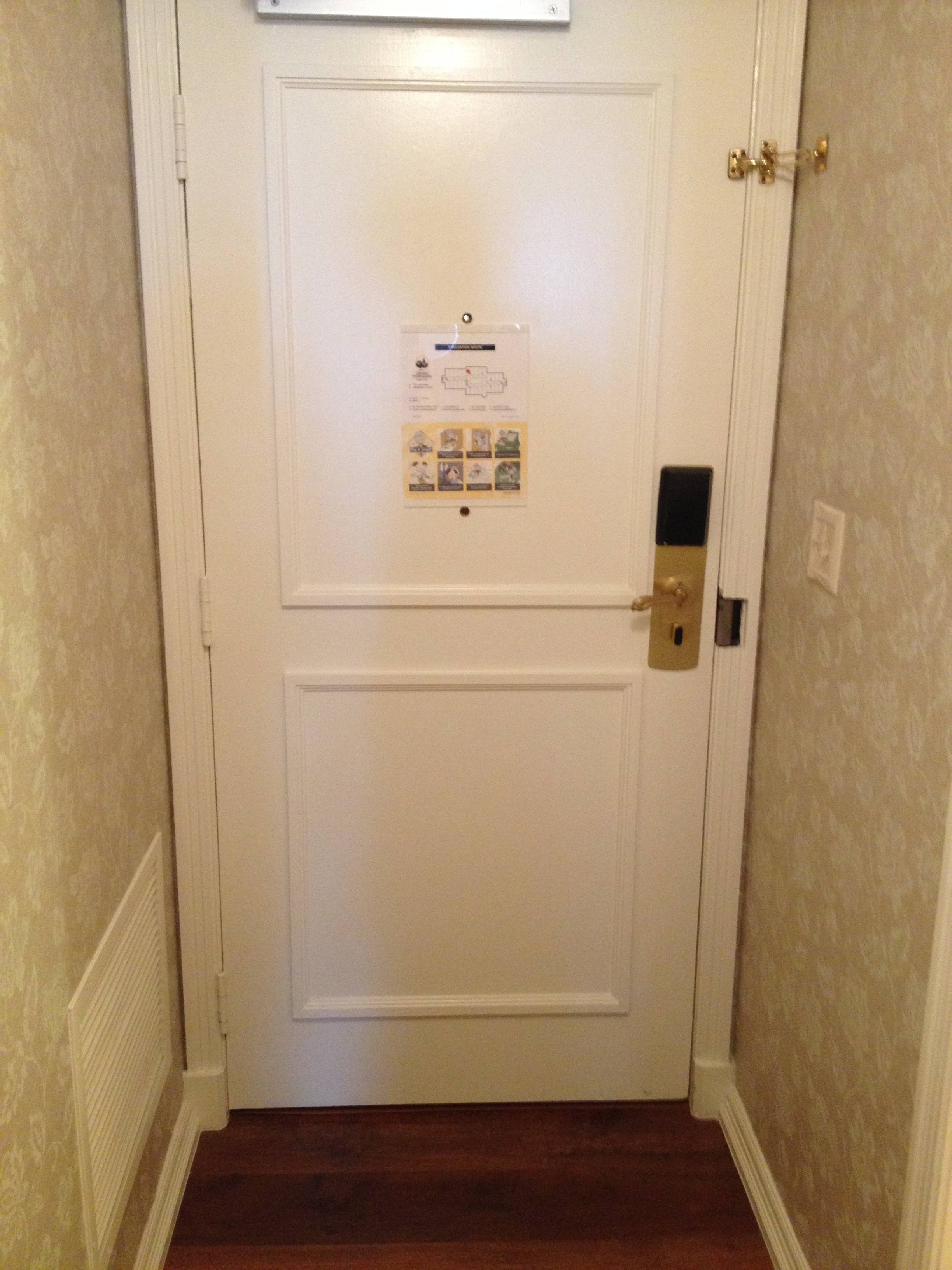 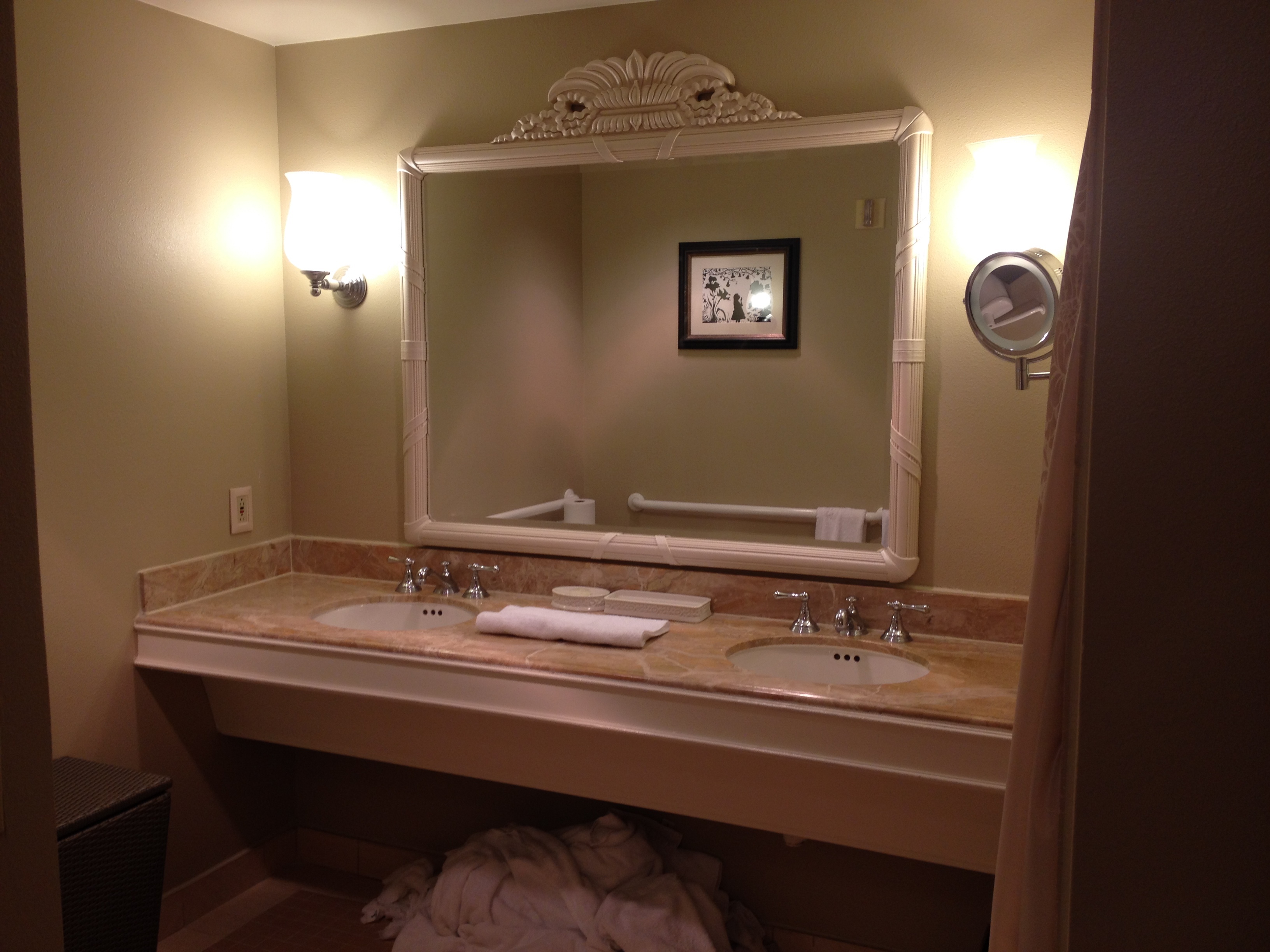 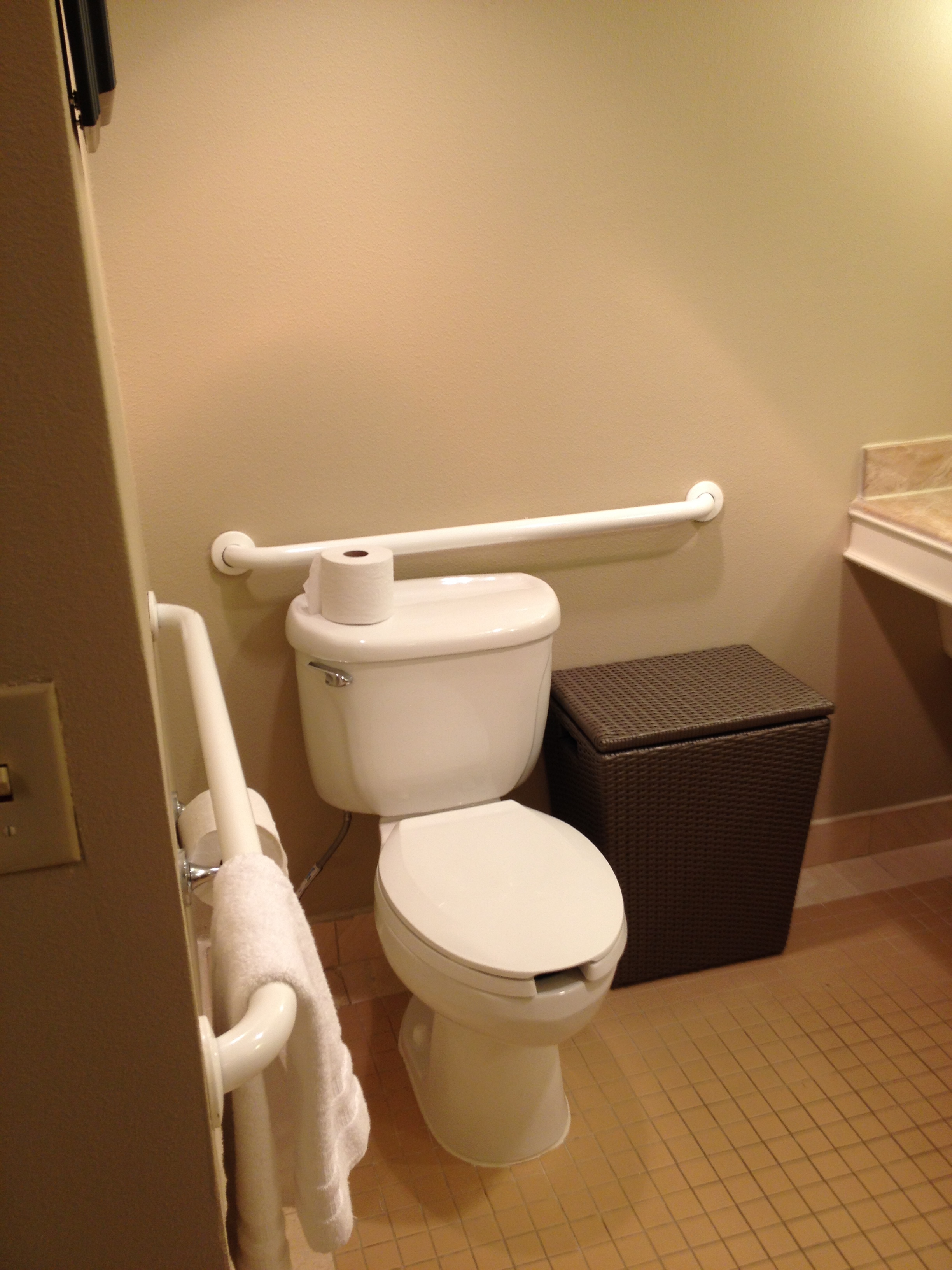 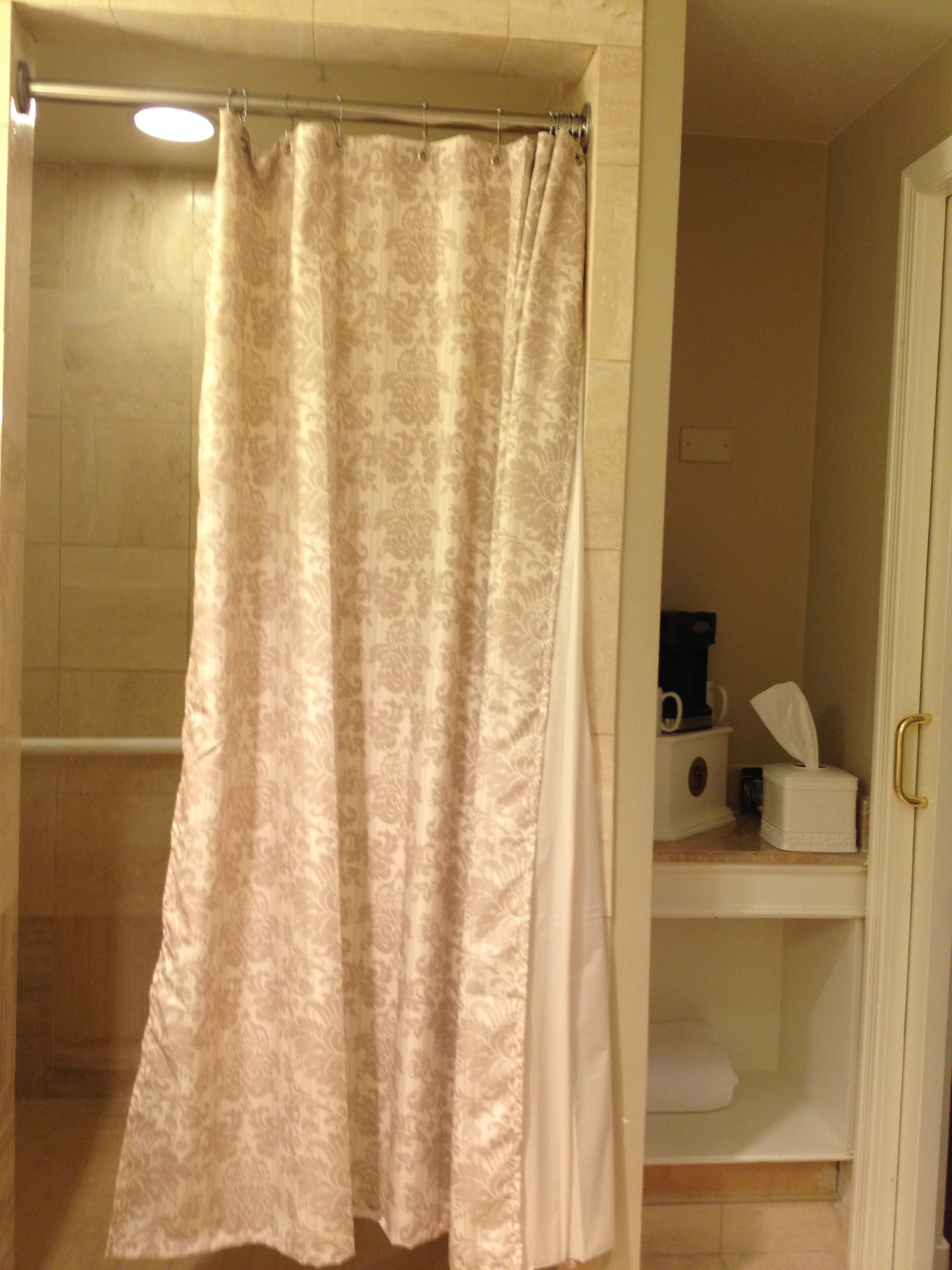 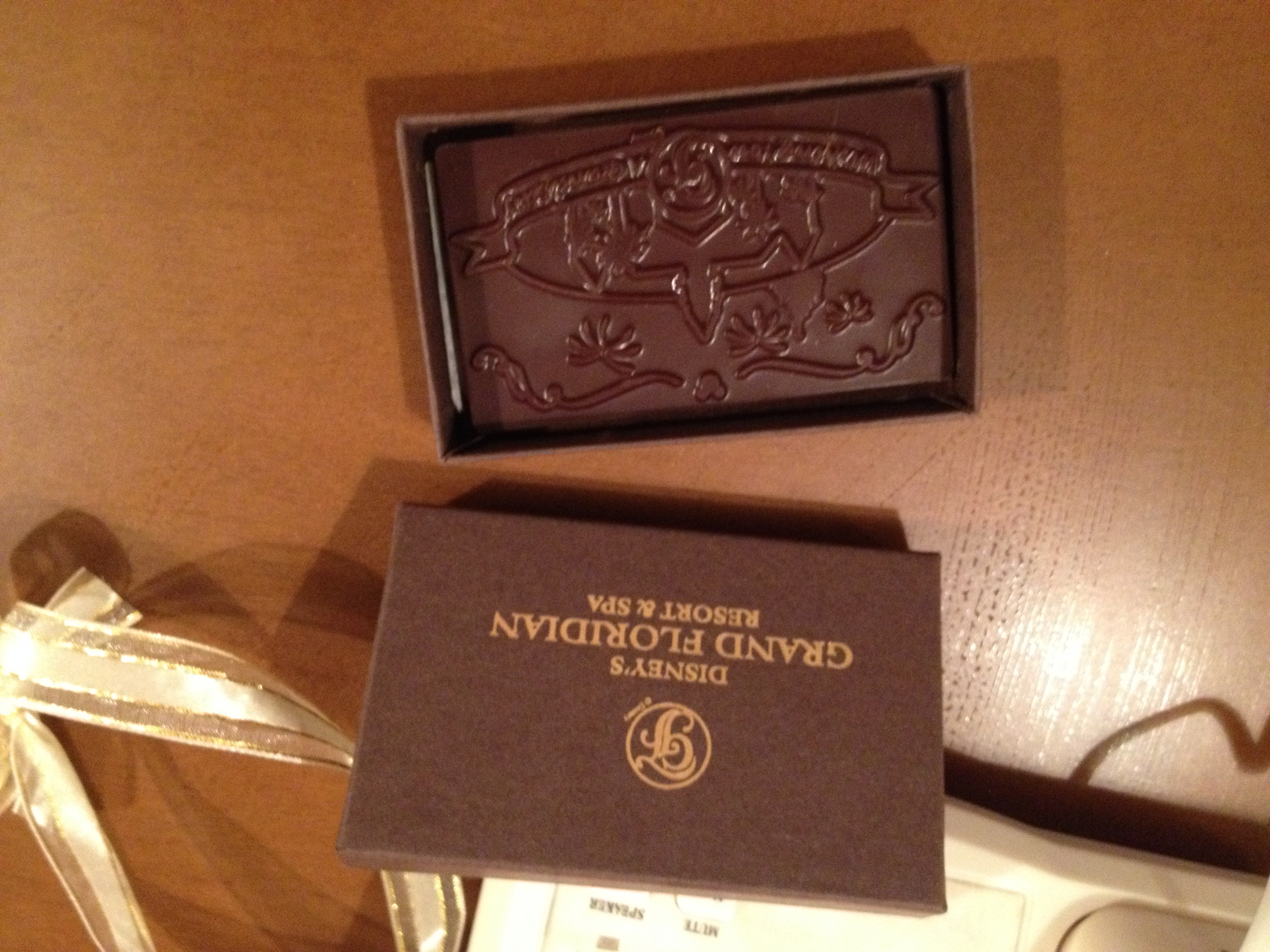 Thanks for taking the time to write up a trip report here. Your photos of the handicap accessible room at the Grand Floridian are going to be VERY helpful when people are searching for that information!

So, are you saying the fries at Cosmic Rays have soy?

Sounds like massive issues with Tokyo dining. I haven’t eaten there in a long time.

Great write-up! I’m trying to wean myself off of CL and on to moderates next year…but GF SL is SO tempting!!! What a great view!

I wonder, did you advise the IPO that you’d need an allergy meal on day 1?

This gave me a big chuckle

people who appeared to have not eaten in months

…it’s like that in every CL lounge, Disney property or not. You’re right, it’s best to stand back til Those with Heightened Senses of Entitlement and Those Who Feel the Need to Get Their Money’s Worth(!!) get through. Once they’re through, things tend to get back to civil…yes, watch out for unattended children. Too gross. I don’t see it every time I go to the lounge, but maybe once or twice a WDW trip.

Off-topic: My worst lounge experience was actually in DC. I went to the lounge in the morning and as I was standing at the counter to get a bagel, some #!$#%# felt the need to open the under-counter fridge in front of my knees, tearing my hose and bruising my foot.

Yes, the fries do contain soy. At least that it what the manager told me at Cosmic Rays, Port Royal at CBR and Gasperilla at GF. But, also cross contamination is an issue with allergy foods.

hmm, didn’t know that. I always have to have the dedicated fryer for gluten allergy, didn’t know about the soy because it isn;t an issue for me.

OMG! to be injured at a lounge. I would have needed to count to 10 before speaking.

I am a yummies gal and I had to restrain myself from over indulgence. I have no tolerance for people with no manners. No one is perfect, especially me, but I was horrified by some peoples lack of manners.

Wow I had no idea soy was in so many things! I hope your mom had a wonderful time!

More about GF and vacationing:

Slide: Lean forward when going down and WEEEEEEEE you go fast.

The trick to get the most out of the little toiletries is to turn them upside down, wait for the air bubble to move up and lightly squeeze. I still could not get all of the conditioner out but turning it upside down did help.

To get your MB’s to work on the doors: Mickey needs to line up with the sensor. Sometimes rolling your wrist works. A CM joked that Disney is secretly seeing who can be in La Nouba.

Important items to take on vacation with you: Pain reliever for adults and kids; Allergy pills (Our allergies were HORRENDOUS); Colace (Yeah, it happens to everyone and it helps); Gas medicine (This too happens, change of diet and eating schedule); Carry a washcloth to the parks; Glow Stick in the packaging {i took them out and then put it in my bag and I had over 20 bracelets glowing in my bag}; moleskin (I broke in my sneakers, but after 2 days the back of my heel was bothering me. I put a large square on, no more irritation; Thermometer (Ya never know); Sense of humor, patience and the ability to relax.

Like most families we spend 90% of our time trying to survive in life. Never having enough time to do what we want in life. I view our Disney vacations as a time to reconnect with each other. I hope that everyone remembers that no matter how much our families drive us crazy that we would not have it any other way.

Ride the monorail at an odd time. Dh and I had our own car. We sat, cuddled, hugged and just took it all in.

MNSSHP: Worth every penny!!! They give so much candy. If you drive back home, do not use ice to keep the candy from melting. I had a bag full of wet candy, water and mush upon arriving home 2 days later. 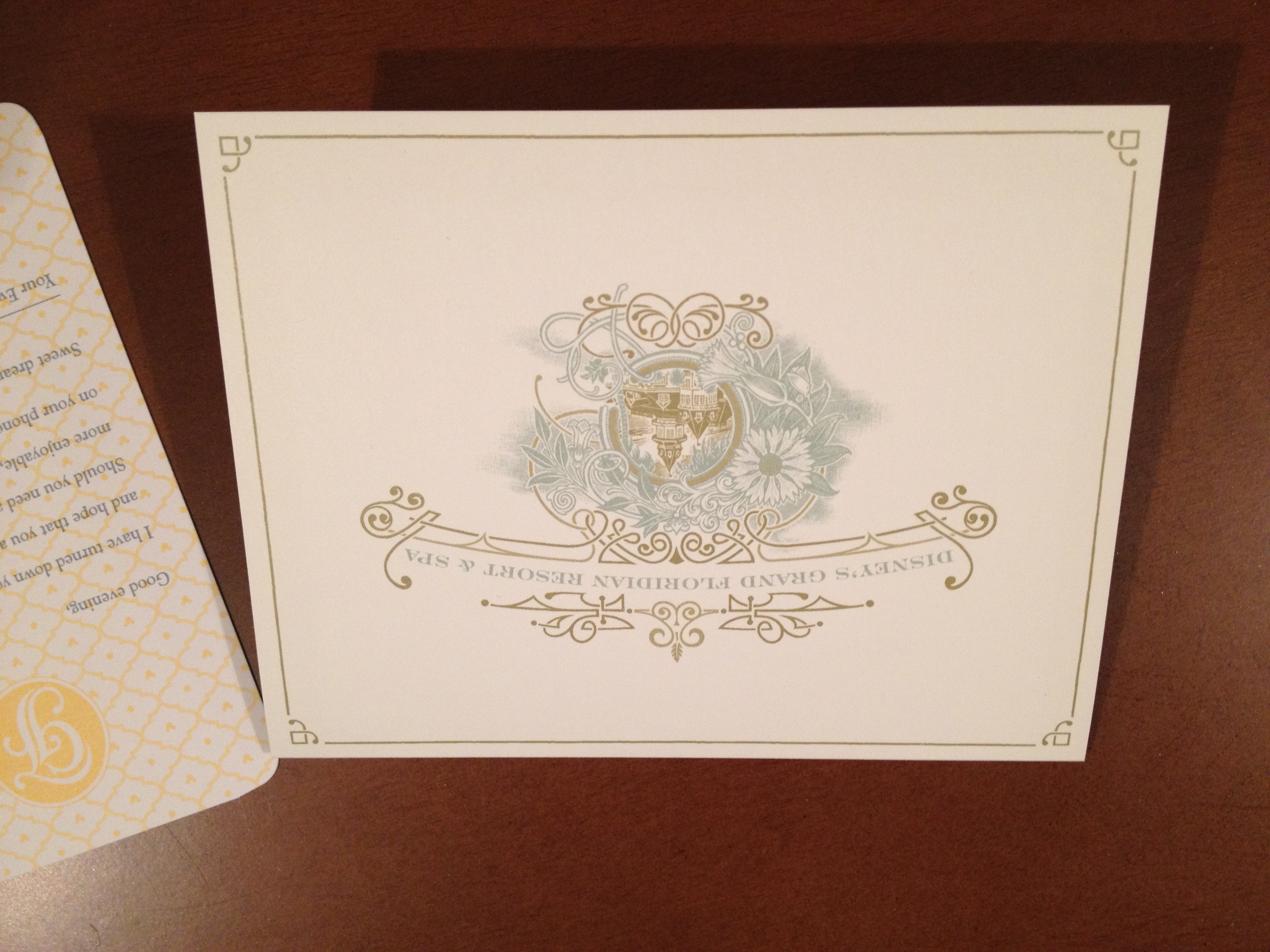 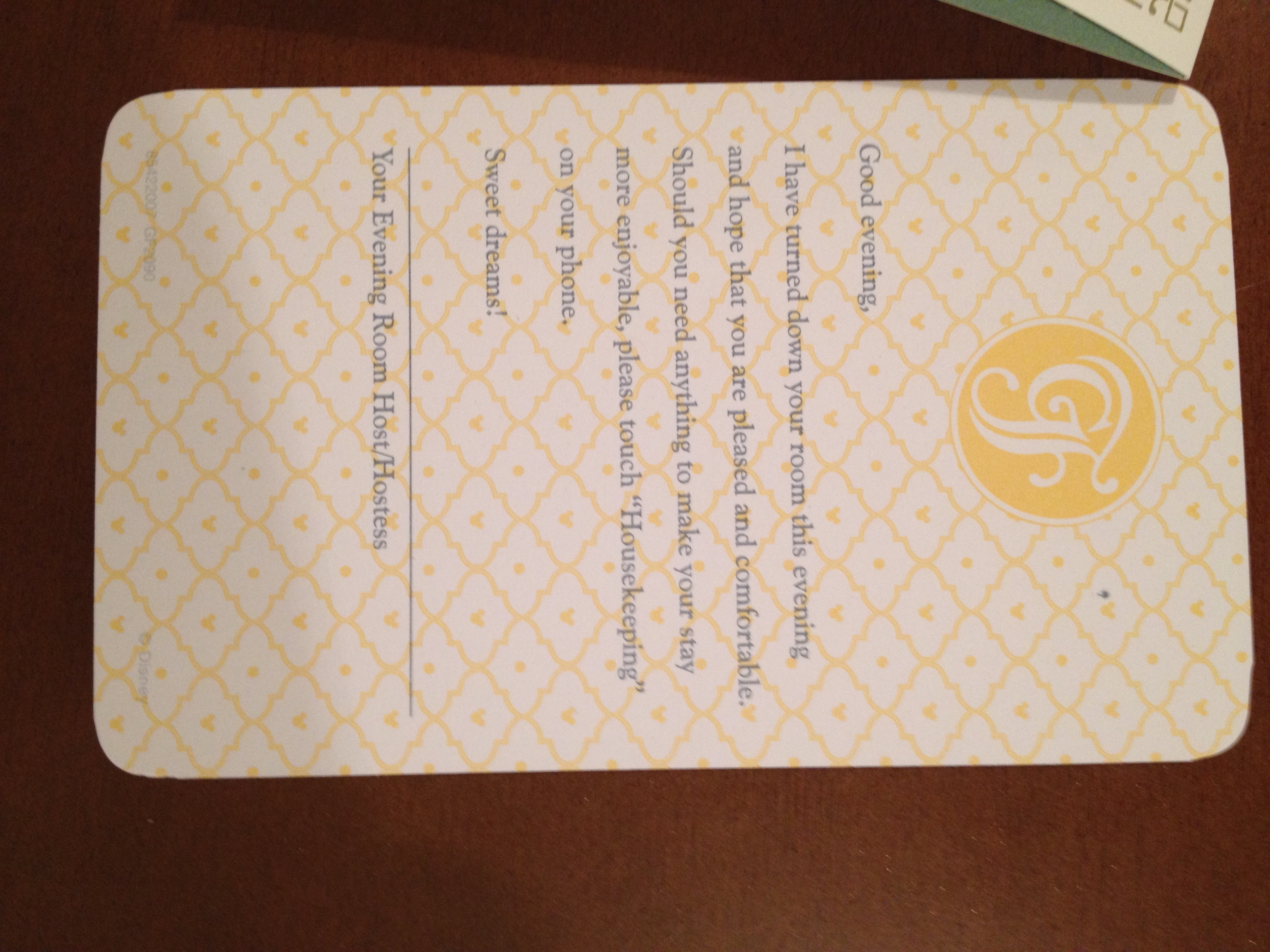 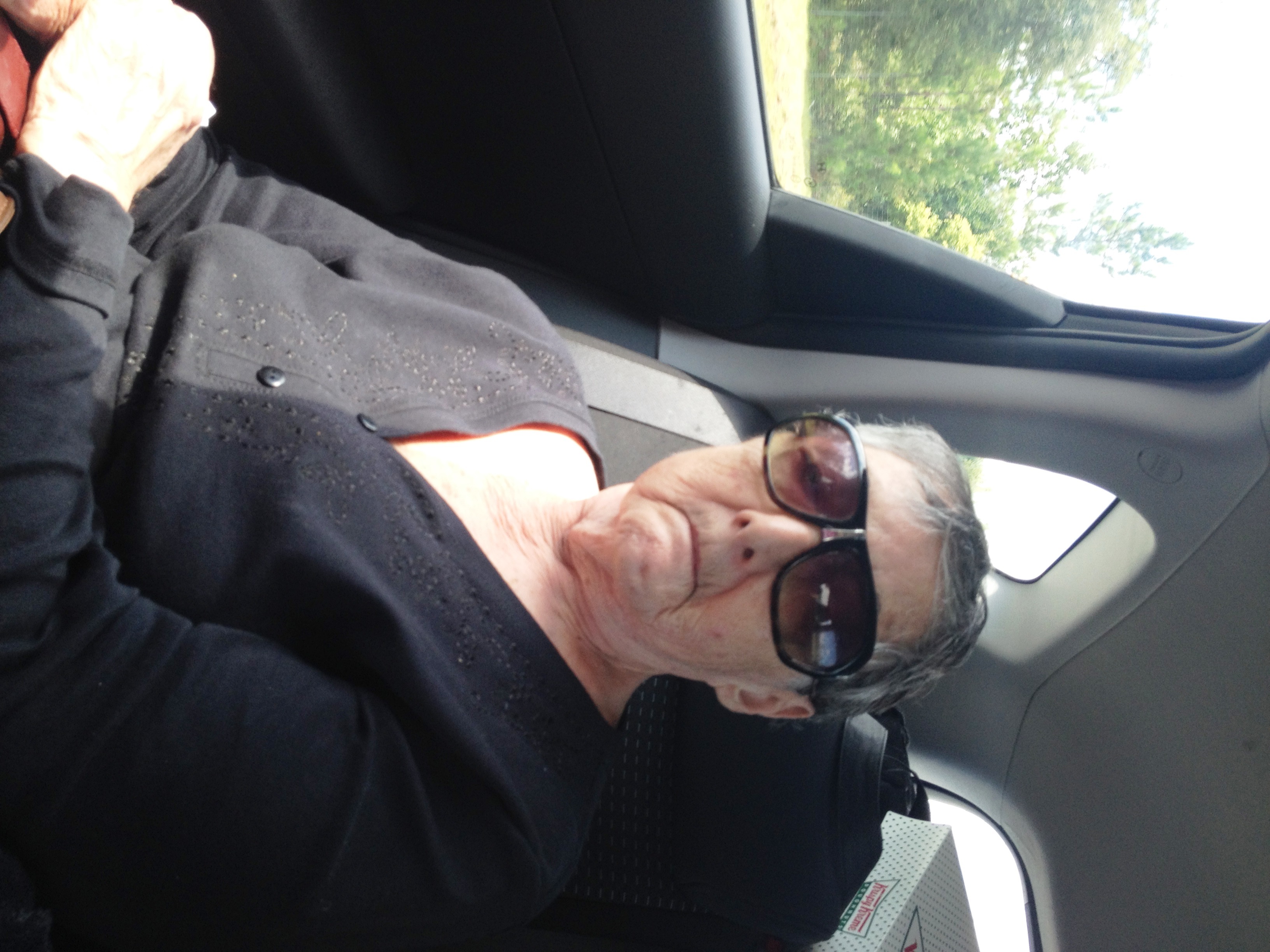 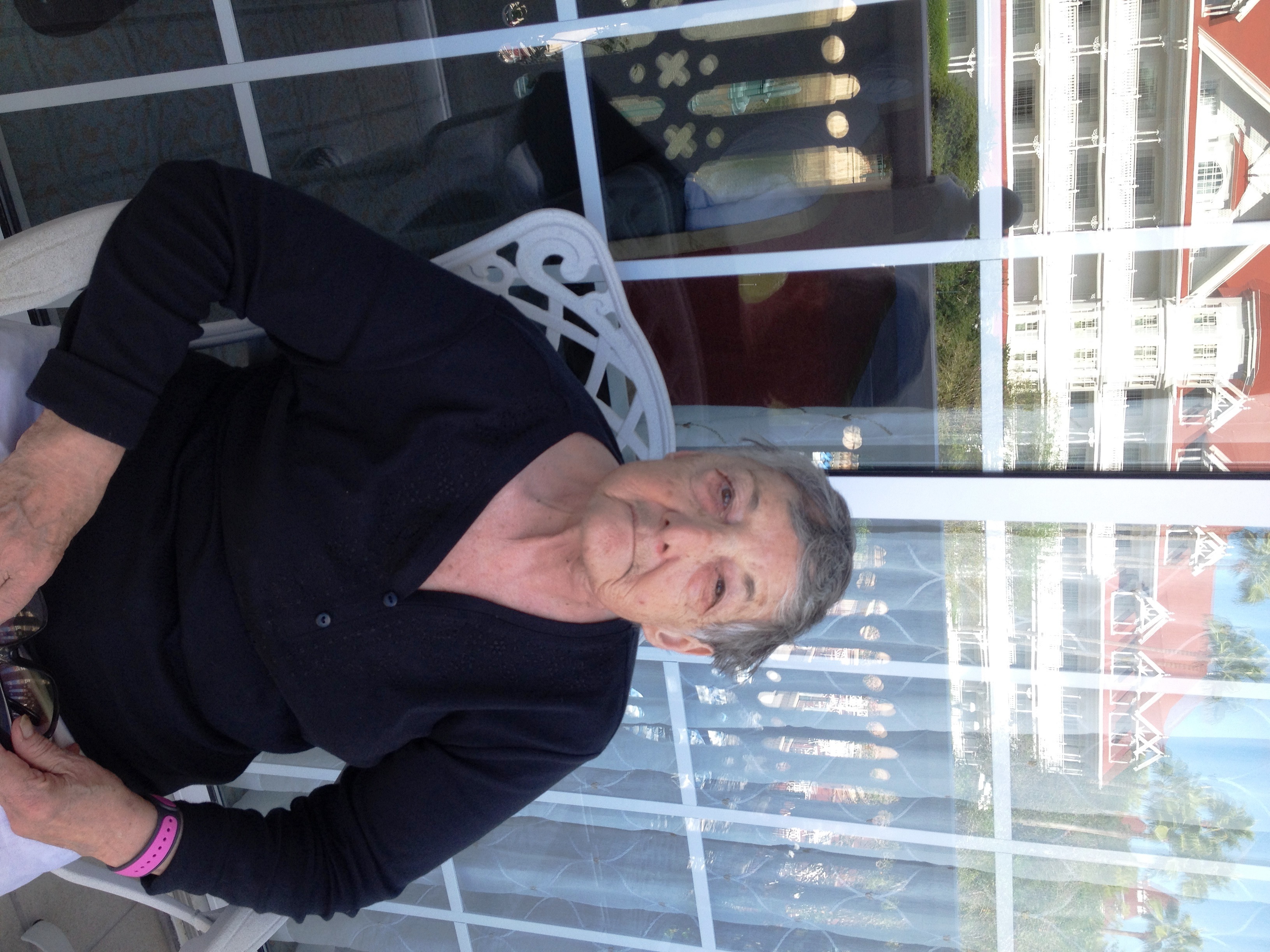 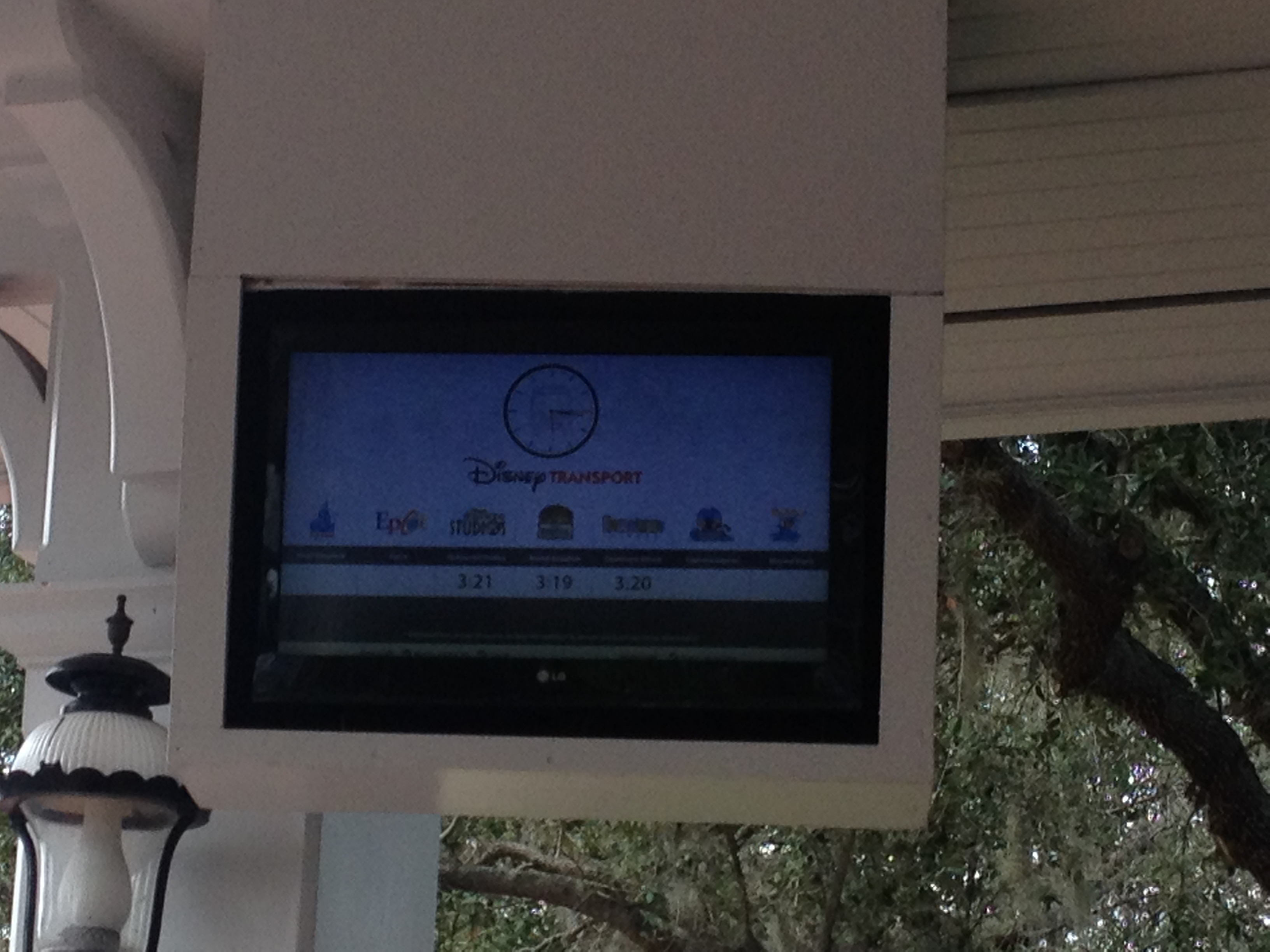 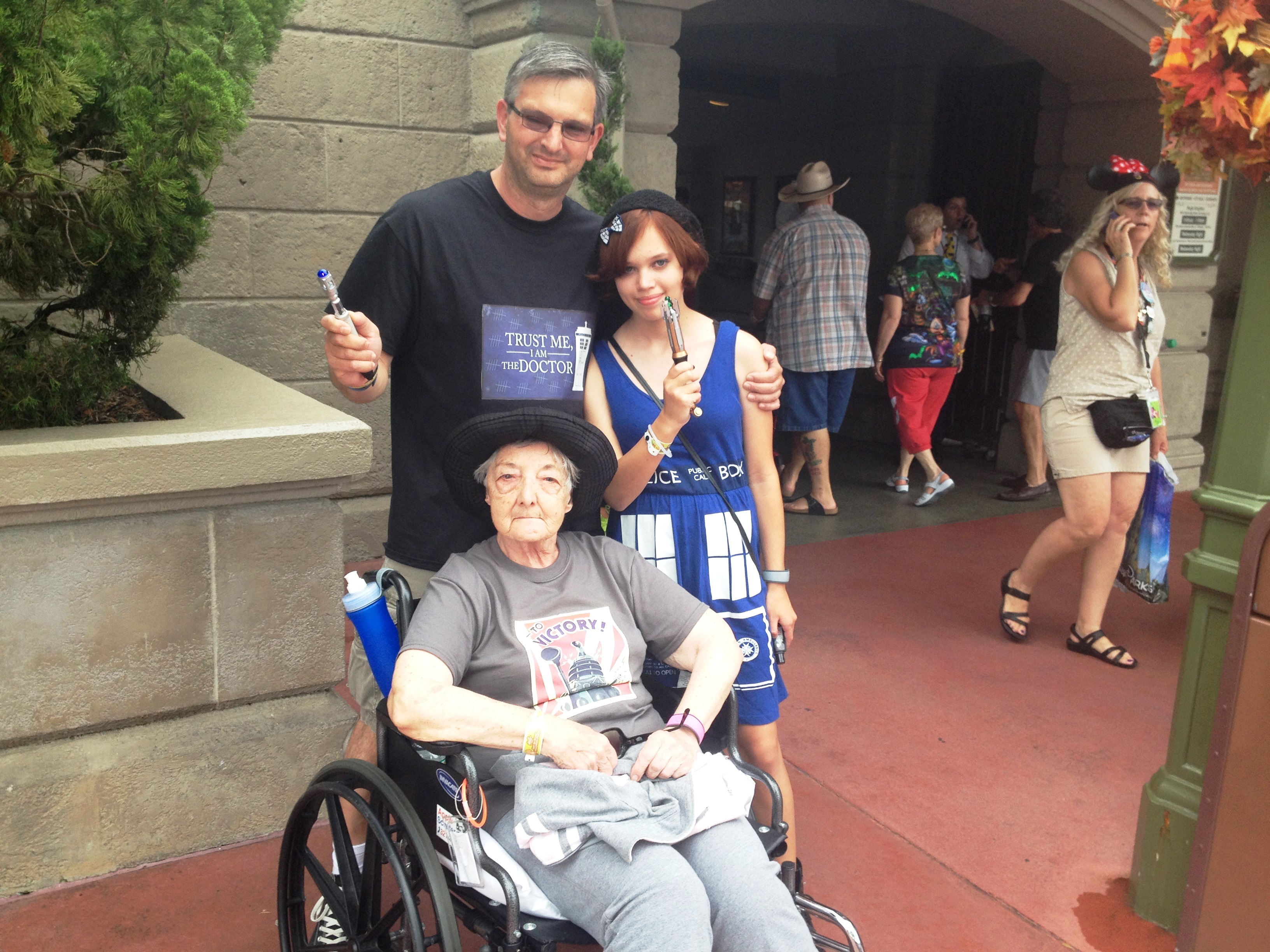 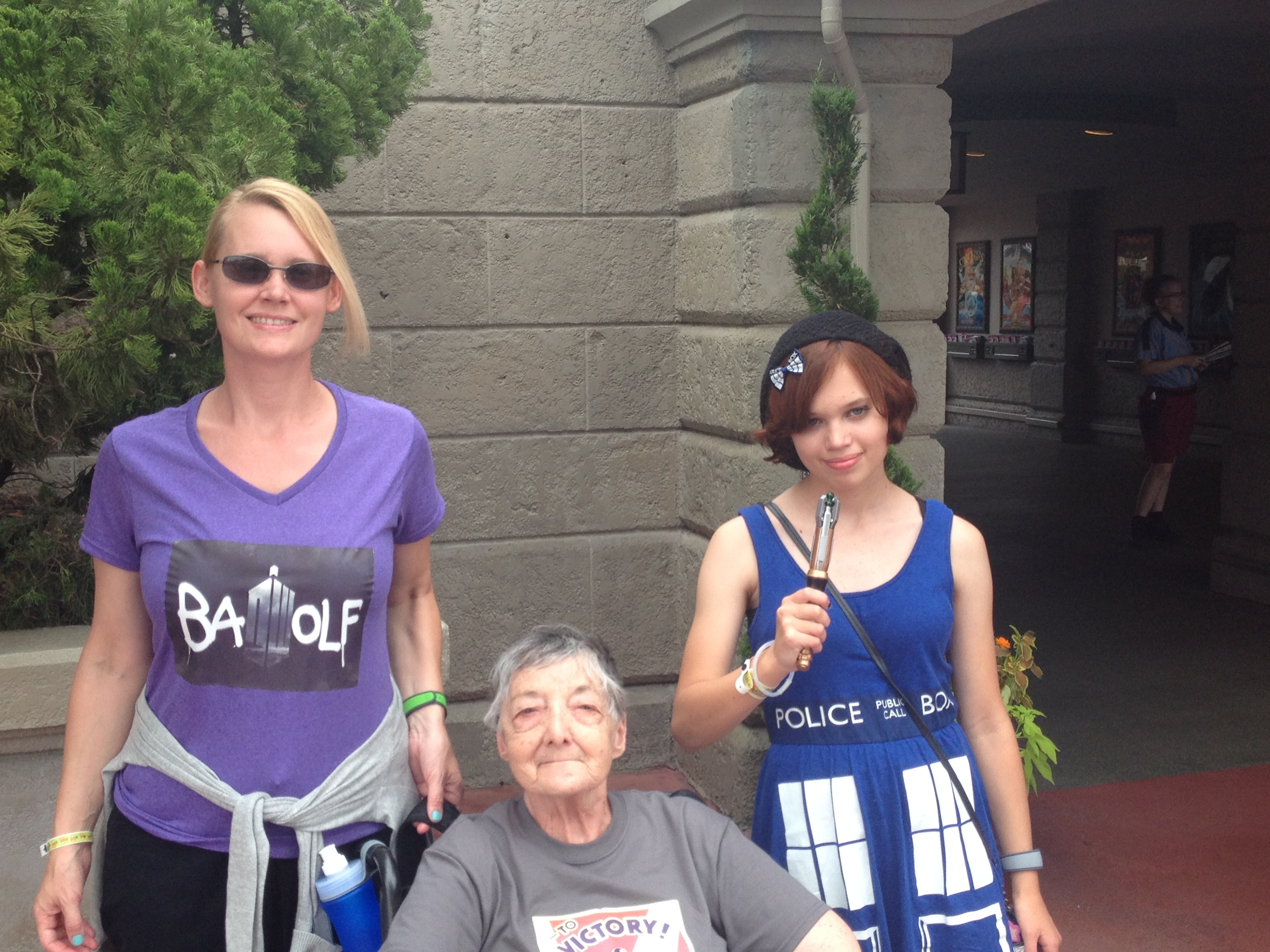 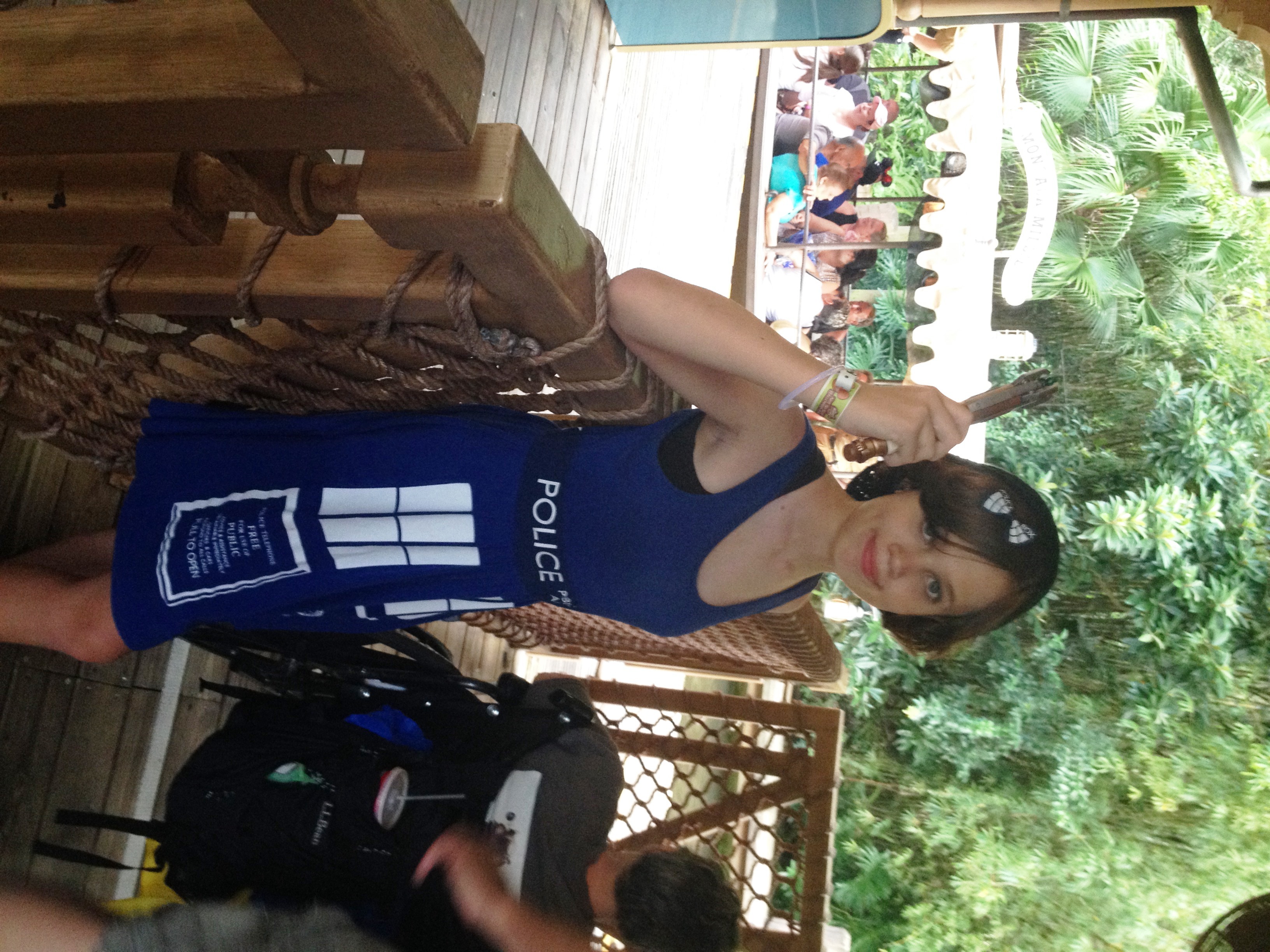 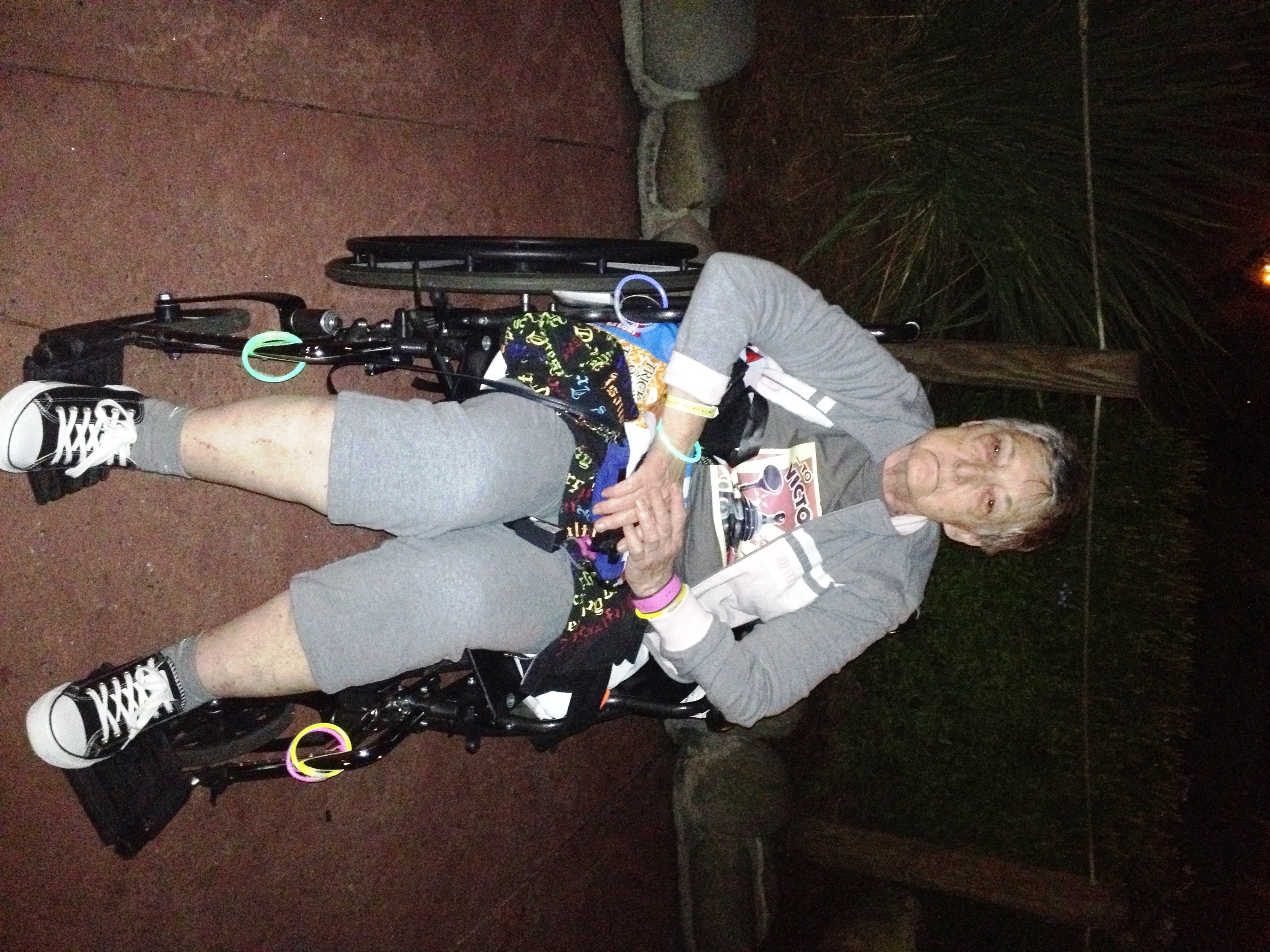 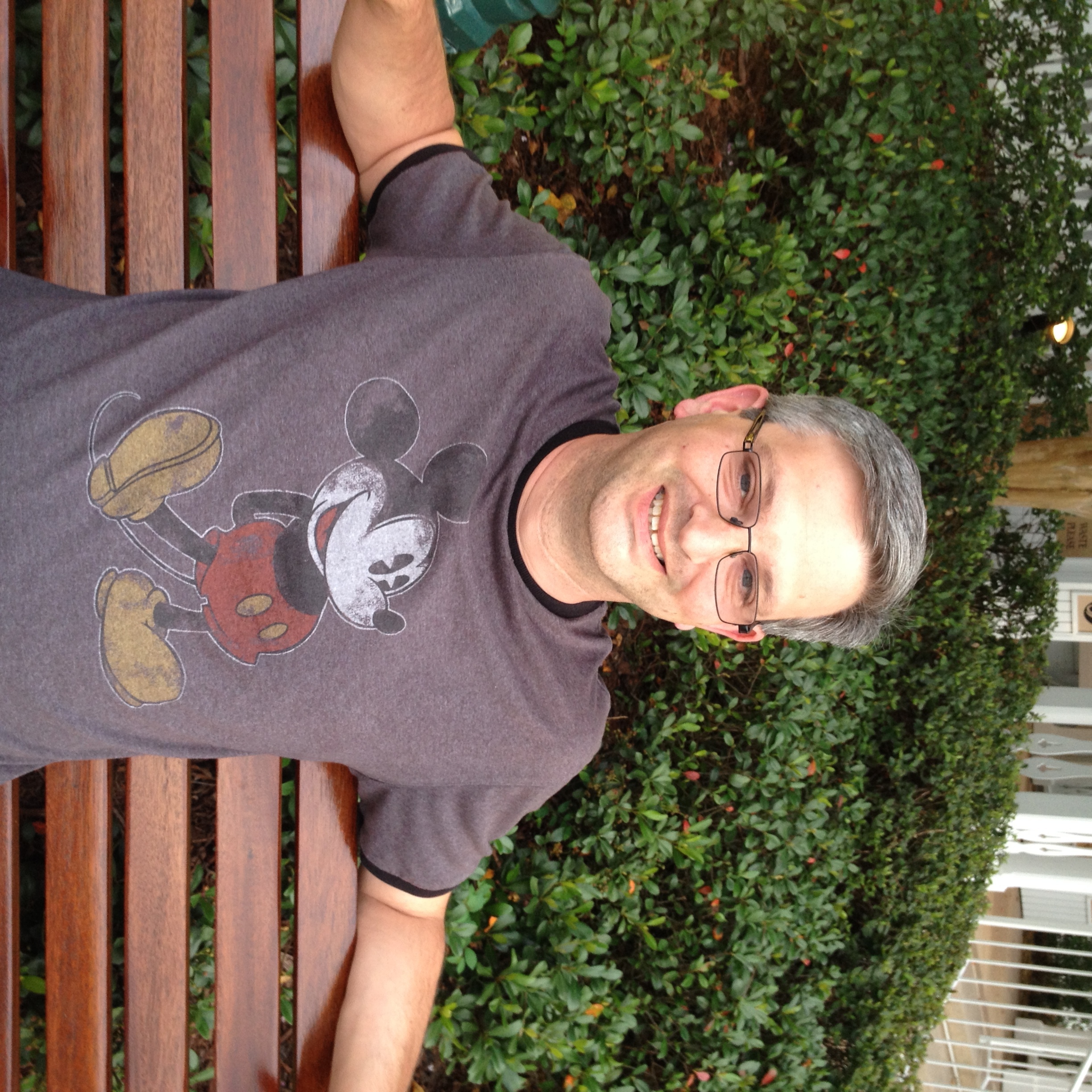 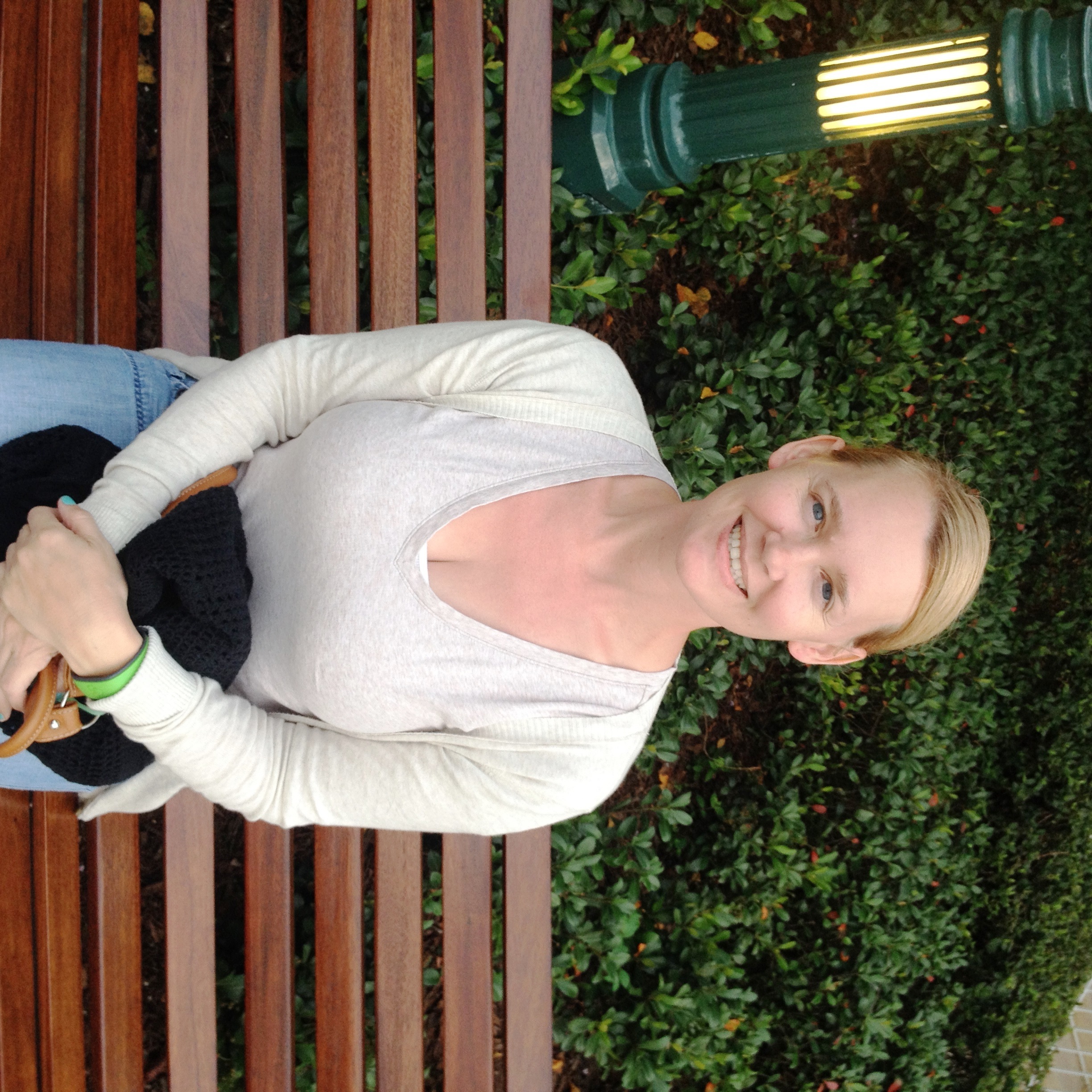 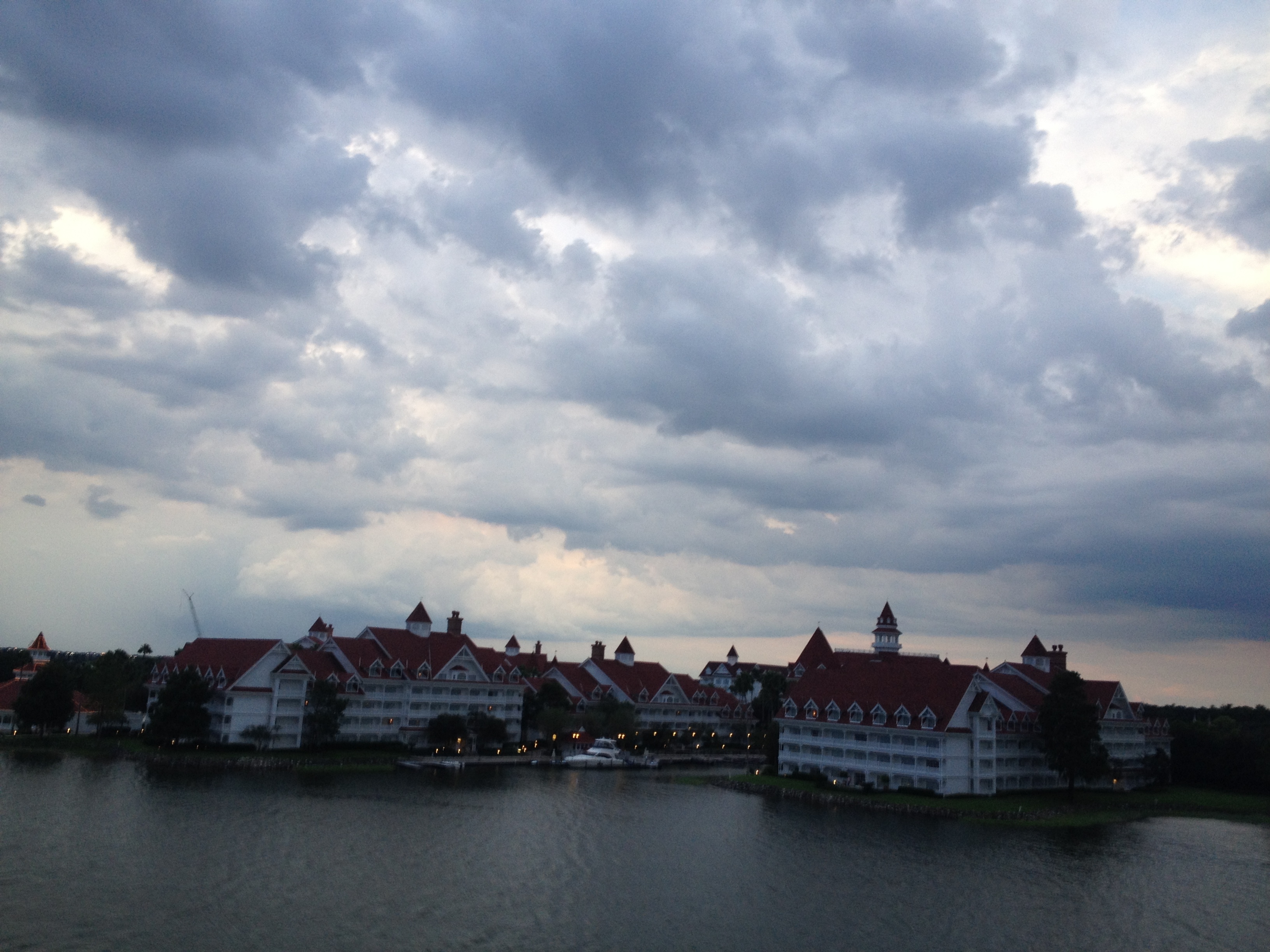 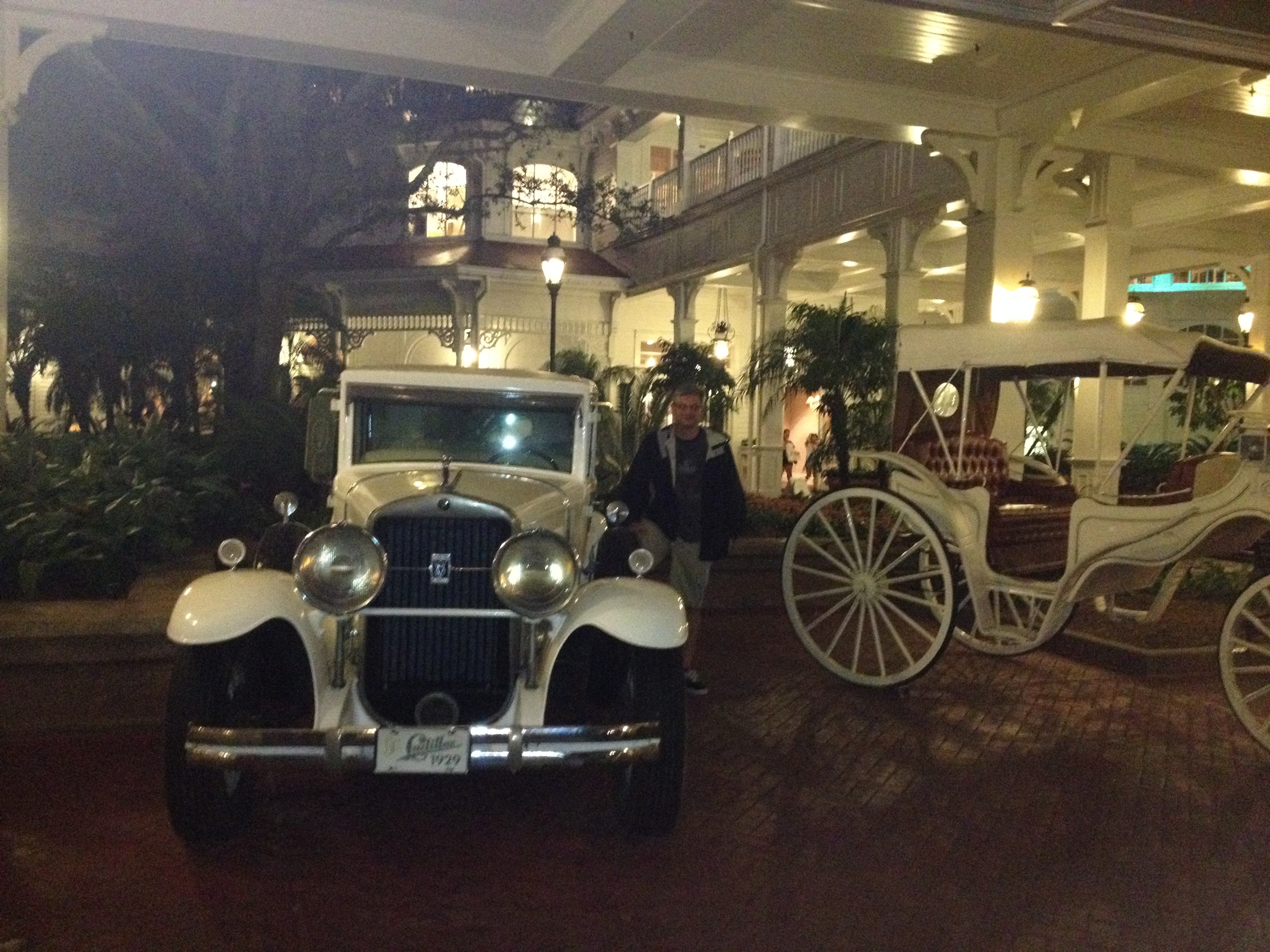 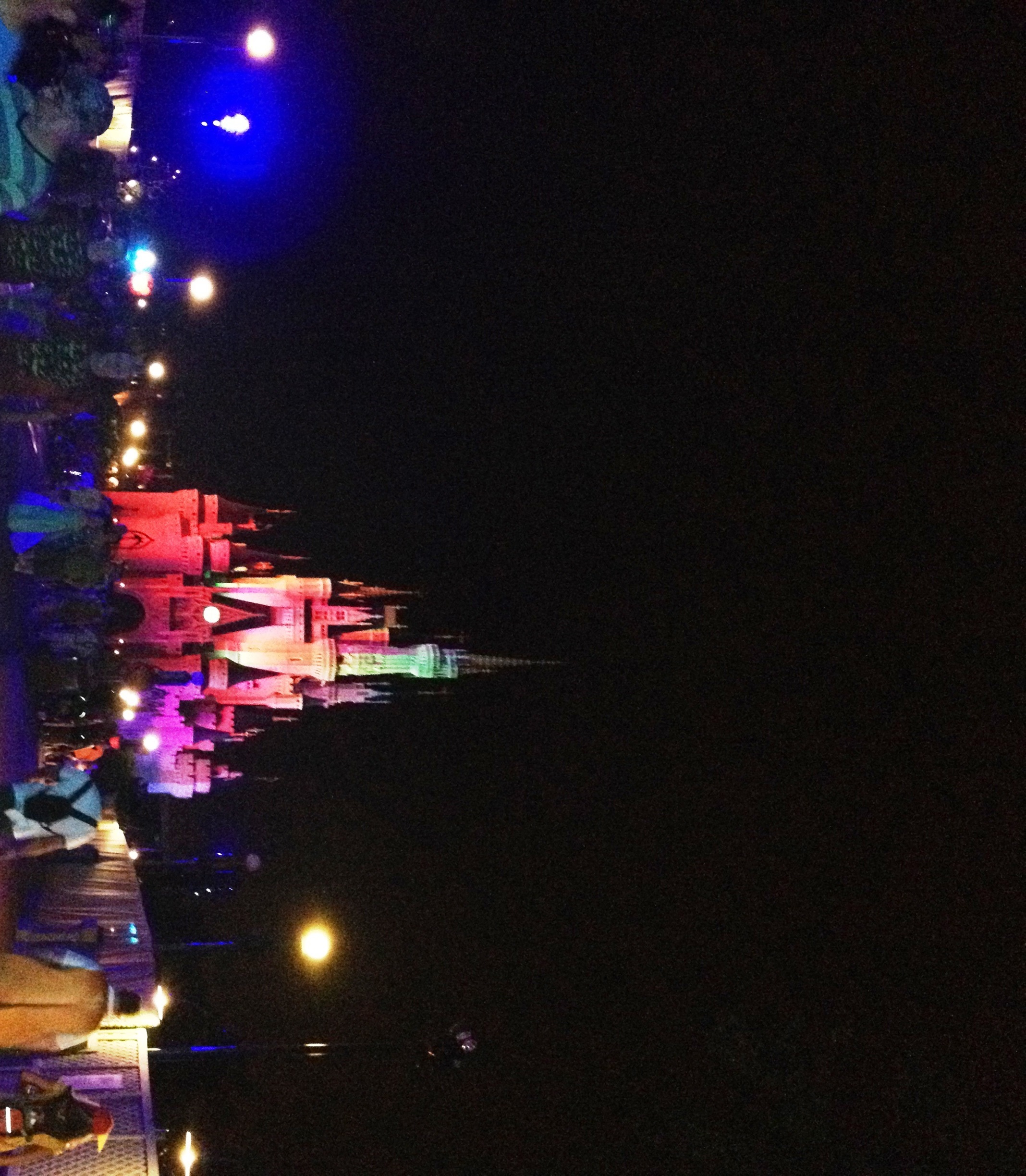 My mom does not know how to relax and she was sad for part of the trip…end of life…my dad died last year…last vacation that she will take with us. But, she did smile and it was worth it. No matter how many times I said "Just enjoy yourself and stop worrying about 1. the buses 2. Monorail 3. where is my daughter?? 4. That hamburger is too expensive 5. That man is eating a lot, will there be enough food left at the buffet for us…Mom’s can’t live with them and take them in public without being embarrassed. But, she is still my mom.

Good for you taking a trip and enjoying your time, creating some more happy memories.